US$3,003.6 million deficit in March. This was much lower than consensus at +US$3,493.0 million and our forecast (+US$3,356.1 million), with no analyst seeing a negative balance. Specifically, this was a result of very strong inbound shipments of goods, which had been lagging. Looking at annual rates, it is worth noting that figures start to be distorted by the effects of the pandemic in 2020, especially evident in the oil sector in this period considering plummeting prices. In this context, exports climbed 12.2% y/y, with imports at +31.4% (Chart 1). Within the former, oil exports posted a massive +70.8% given the price rebound, with the Mexican oil mix up 159.8% y/y, standing at 60.8 US$/bbl. Meanwhile, non-oil expanded 10.2% –still not as distorted–, with manufacturing strong at 9.9%. Inside, autos stayed negative at -5.2%, which is a weak print despite recalling that shipments abroad in 2020 were replaced with inventories. On imports, the oil sector also skyrocketed at 104.7%, with non-oil also more stable at 24.0%. Inside, the outperformer was capital goods (31.1%), which have been recovering lately. Nevertheless, consumption (27.3%) and intermediate goods (22.9%) were also very high. Further details are presented in Table 1. As a result, the trade balance accumulated a US$29,195.2 million surplus in the last twelve months, with a US$15,280.2 million deficit in the oil sector and a positive balance of US$44,475.4 in non-oil (see Chart 2).

Strong growth in sequential terms across almost all categories. Given the distortions mentioned above in terms of annual rates, it is key to assess sequential performance. Overall, results were very strong, with exports up 4.3% –more than reversing February’s decline– and imports surging 18.4%. –second highest in the historical series (see Table 2). In our view, these reinforce the signal that economic activity accelerated meaningfully in the period, even when controlling for an upward skew from dynamics in oil-related goods. Regarding the latter, crude oil exports went up 11.6% and others 60.3%; in imports, the main highlight was intermediate goods at 122.2%. Despite of this, we warn the reader that oil flows have been losing importance for several years ago.

In this respect, non-oil shipments abroad rebounded to 3.6%, while foreign purchases surged to 11.5%. Some of this is likely just catch up from reestablishing operations (particularly manufacturing) after disruptions, with factories rebuilding likely inventories as suggested by the very significant growth of 12.3% in intermediate goods, closely related to the sector’s production process. On the other hand, manufacturing exports picked up 3.7%, barely reversing the 3.6% contraction observed in February. Others accelerated strongly at 6.3%, so the drag came from autos (-1.6%). We will keep watching the latter closely as there are still a plethora of reports of issues due to the undersupply of key raw materials. Non-oil mining picked up 11.6%, while agricultural fell 1.8% after the previous month’s advance of 7.8%. In imports and apart from intermediate goods, consumption (8.7%) and capital goods (8.9%) were also quite positive, which is very important as we believe they may be signaling a better performance of domestic demand, which has remained muted.

Report suggests higher economic dynamism at the end of 1Q21, although we should be cautious given temporary distortions to global trade. At first sight, today’s important surprise –particularly in sequential figures– is very favorable as it points to stronger economic dynamism across the board. Despite of the latter, we are somewhat cautious to read too much into them as global trade disruptions have been very important recently. For example, we have had: (1) The blockage of the Suez Canal from March 23rd to 29th, where it is estimated that about 12.0% of the world’s maritime trade passes by; (2) reports of hefty congestion to unload cargo in several US ports, maybe resulting in redirecting of certain ships; (3) the Chinese New Year that took place in mid-February, which typically distorts figures; and (4) other factors and events, such as a fire in a key semiconductors plant in Japan. Given that global trade flows are very complex and can have important indirect effects to several countries, we do not rule out today’s results were a blip from the trend towards higher surpluses seen since around 2019.

This does not mean that we do not heed the cue provided by the report, but only that more data is needed to confirm if we are at an inflection point. Specifically, we will be keenly focused on the sequential performance of both consumption and capital goods imports, as these should signal more clearly if we are seeing a material improvement in domestic demand. This may be supported by better epidemiological conditions locally and second-round effects from unprecedented stimulus in the US helping our country (including higher remittances). For now, these figures support our view of an acceleration in activity and our call of a positive print in GDP for 1Q21, anticipating a 0.3% q/q expansion.

Going forward, it is our take that the short-term outlook looks more positive, but risks remain. Broadly speaking, we highlight some signs of a slight deterioration in contagion curves in some states, with the traffic light indicator at the end of April showing 6 states in ‘green’ (vs. 8 in the previous two weeks), with 6 in ‘orange’ (previous: 5). According to comments from Health Ministry representatives, cases in at least 16 states (half of the country) are showing a mild upward trend. This could be linked to the Easter holiday and looser distancing measures. In either case, we remain vigilant as activity has been correlated to this indicator. Other risks are mainly in the oil sector. On April 7th, an explosion occurred in the Minatitlán refinery, in Veracruz. According to early Pemex reports, the facility will be closed for at least three months while repair works are underway. More recently, on April 20th, natural gas ducts in the ‘Pajaritos’ complex in Coatzacoalcos also exploded. While these events should not have a significant impact on extractive operations, they will likely limit domestic refining capabilities, possibly driving oil imports higher in coming months. On other fronts, supply-chain issues prevail, mostly related to semiconductors. According to IHS Markit, auto production in Mexico in 2021 will be close to 3.5 million vehicles. This compares with a total production of 3.8 million units in 2019 –implying a 7.9% decline relative to said year– and 3.0 million in 2020 –a 16.7% expansion–, with the latter highly impacted by the pandemic. Specifically, they mention that around 38% of vehicles produced in North America will suffer some type of delay. We must also factor-in the impact on other goods, considering that more and more appliances now rely on these key components.

We keep expecting an additional boost in exports from higher external demand, which will be the main pillar of Mexico’s recovery and our call of stronger growth ahead. We believe this will be more evident in manufacturing exports. Considering all of this, context, we maintain our forecast of a 5.3% y/y expansion in full-year 2021 GDP. Nevertheless, if today’s signals of stronger domestic demand consolidate in coming months, we see upside risks to our already upbeat forecast when compared to current market expectations. 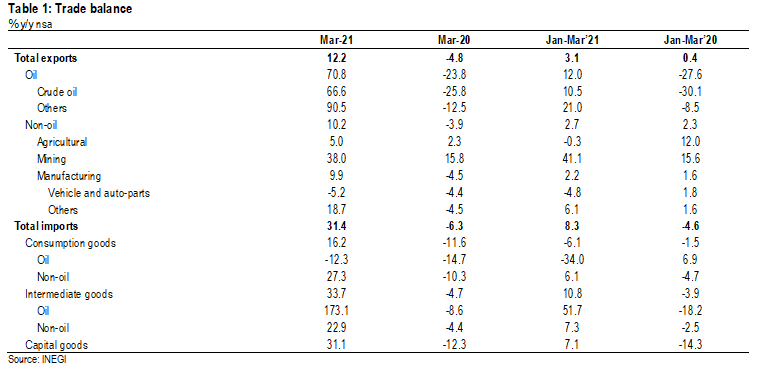 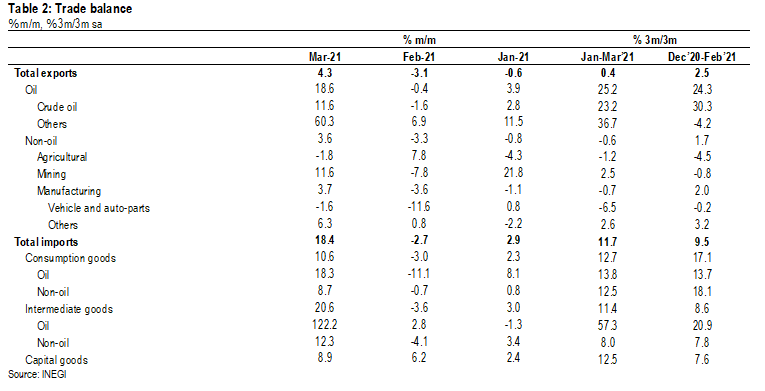