Retail sales declined 7.1% y/y in September. This was higher than consensus (-8.7%) and also than our -8.1%. It also represents the fifth time in a row with a stronger result in annual terms. This is consistent with most other advanced data which also showed a stronger performance. Another factor behind this was a more favorable calendar effect, as the month had one more working day in the annual comparison. Nevertheless, and more importantly in our view, results point to a further normalization of economic activity. As we have stated in recent months, we believe one driver has been fatigue due to the length of the pandemic, which may have been especially positive for the informal sector. Second, we highlight that epidemiological conditions kept improving domestically, possibly helping also to drive mobility levels higher –albeit more marginally–. On a year-to-date basis, retail sales accumulate a 10.5% y/y decline, higher than the -11.0% observed in the previous month.

Monthly data advance again. Specifically, sales increased 2.7% m/m, the same level as in August, which was revised up from 2.5% previously. In this respect, performance remains favorable considering that it has been recovering since May, before the reopening of the economy gathered pace (in June). Given these gains, the absolute level of sales is now around those seen in by year-end 2015 and 6.2% below February, before the pandemic hit. By category, we highlight hints of an improvement in categories that may be more influenced by mobility levels. Among them, we include clothing and shoes, which surged 26.2%, while leisure increased 13.2%. In addition, internet sales slowed to 0.7%.

On the other hand, we also note that some essential categories accelerated, such as food and beverages (5.9%) and supermarkets and departmental stores (2.8%). Within this, both components rose, albeit with a much better performance in the latter (11.1%). This is consistent with the relative improvement in departmental store sales according to ANTAD. Meanwhile, healthcare (-2.5%) declined for a second consecutive month. Autos slowed down (0.5%) after a stronger performance recently, while other non-essential goods declined, such as glass and hardware (-2.2%) and appliances and computers (-2.2%) declined. 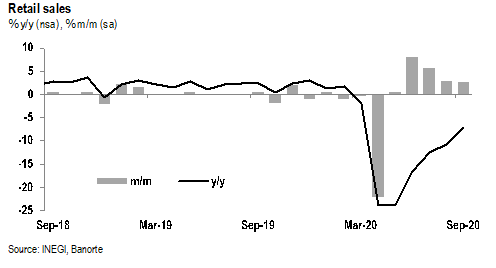 We expect sales to keep advancing, despite risks building up. We believe the report is positive as sales extended their gradual recovery. We believe this will continue, with available data so far consistent with additional gains. Among them, we highlight: (1) ANTAD’s same store sales for October were better again, down only 1.2% y/y in real terms, with supermarkets in positive territory but some weakness in departmental stores; (2) vehicle sales according to AMIA were higher at the margin, at -21.3% y/y from -22.8% in September; and (3) some reports that sales during the period of discounts of “El Buen Fin” (Mexico’s Black Friday) surpassed expectations. Nevertheless, we should mention that this initiative was extended due to the pandemic (officially from November 9th to 20th, with several businesses ending it until the 22nd). Therefore, results may be distorted, while we cannot rule out some payback in December –especially if some people took advantage to make their holiday sales–. On the other hand, employment gains have continued, with October’s report showing a net job creation of 1.9 million, which is also helpful at the margin despite being skewed towards people earning relatively low wages.

Apart from this, consumer confidence extended its move higher in the same period, which may also be helpful, especially for durable goods’ sales. Regarding the latter, we do not rule out that positive news about the development of a COVID-19 vaccine by Pfizer/BioNTech, Moderna and AstraZeneca, among others, helps lower uncertainty. In turn, this may be relevant as it could help reduce precautionary savings by some consumers. Overall, most advanced data show a skew towards additional gains going into the end of the year, albeit likely at a more modest pace given an increasingly difficult base effect.

On the contrary, we warn about some risks building up. Among them, we believe the most relevant is that epidemiological conditions have worsened, especially since October, which may lead to renewed restrictions. Although only two states have returned to red (Chihuahua and Durango), major metropolitan areas –such as those in Mexico City, State of Mexico and Nuevo León– have seen an uptick in new cases. In this backdrop, in the first two, several non-essential activities have been ordered to close their doors by 7:00pm starting on November 23rd, with restaurants open until 10:00pm. We also note that IMEF’s non-manufacturing PMI backtracked some gains in October. Meanwhile, mobility indicators in November seem to be declining modestly relative to levels registered in the previous month, with October stagnating after these had been trending higher since the start of the reopening. These dynamics could accelerate as the winter season approaches. Lastly, consumer credit remains in deep negative territory              (-10.0% y/y in September, with all categories contracting), which may be a relevant headwind, especially for sales of big-ticket items.