Retail sales rise 7.2% y/y in August. This was higher than both consensus (6.6%) and our estimate (5.6%). At the margin, the period was boosted by an additional working day in the annual comparison. Adjusting for this with seasonally adjusted figures, activity advanced 7.3%, impacted by a less favorable base effect. We consider that sales were affected by an additional deterioration in the epidemiological front, with the number of daily cases reaching a new high. In addition, its impact on some fundamentals –mainly employment– likely triggered greater caution among consumers, awaiting greater certainty to resume spending on non-essential goods. However, a contraction was averted given strength in other drivers, mainly remittances, which reached a new historical high in the period.

Sales unchanged sequentially in a more challenging backdrop. Total sales were flat (0.0% m/m), after substantial losses in the previous two months. On top of the factors mentioned above, we believe inflationary pressures have had a more relevant impact and have become the greatest short-term risk for additional gains. However, there was a breather from the enactment of a price ceiling to LP gas, which may have freed up income for some people. In our opinion, the breakdown reflects part of this, along other pandemic distortions. In this sense, contractions were relevant in clothing and shoes (-11.7%), office and leisure (-2.8%) and appliances (-2.8%). On the contrary, internet sales surged 11.0%, with gains also in healthcare (+3.3%) and supermarket and departmental (+0.6%). Within this latter category, and surprising relative to other sectors, departmental stores surged 4.3%, while supermarkets edged-up 0.6%. Lastly motor vehicles and gasoline fell 0.5%, consistent with modest mobility gains –driving fuels higher– partly offsetting for lower vehicle sales. 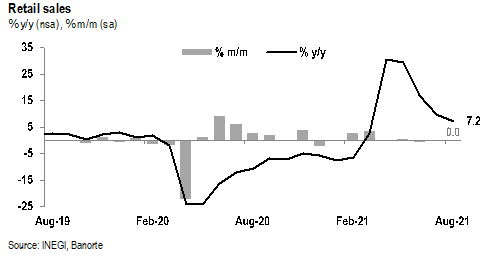 Mixed short-term outlook. After a series of relatively weak results in recent months, we believe the outlook has improved modestly. In this sense, we highlight virus dynamics. After fresh highs in August, the number of daily cases decreased rapidly through September and October. As a result, the traffic light indicator also improved substantially in the latter month. Mobility figures have also shown an uptick, which we attribute mainly to this situation –along accumulated gains from the vaccination campaign–, practically matching pre-pandemic levels. In this context, consumption-related data improved in September. Among them, consumer confidence expanded 0.8pts to 43.3pts, albeit remaining below levels seen in June and July, before the ‘third wave’. Meanwhile, total sales from ANTAD members accelerated to 5.6% y/y in real terms. Inside, all categories were stronger, with the most significant rebound in departmental stores (9.4%). We believe this is very important considering that these were most impacted in the preceding month. On the contrary, vehicle sales came in at 76.9 thousand (-1.1% y/y), although it is important to add that these are probably skewed heavily to the downside also by supply-side constraints.

Despite of these, a growing headwind comes from price dynamics. Specifically, inflation accelerated strongly in September, reaching 6.00%. Inside, out if the 299 generic goods and services, 195 (65% of the total) show variations above 4%. As stated in other documents, this suggests more generalized increases, probably on increasing costs. On top of the latter, some key food items in the basket (e.g. corn tortillas, cooking oil, milk and some fruits and vegetables) and goods for fulfilling basic needs (e.g. LP gas) have increased strongly, impacting people’s purchasing power.

In this sense, we will follow closely the evolution of global price pressures, wage negotiations, employment dynamics and the adjustment to the minimum wage to see if these could help offset for said purchasing power losses. Meanwhile, banking credit has not accelerated strongly, remaining as a missed opportunity for a larger acceleration. Another source of potential difficulties might be the availability and prices of goods ahead of El Buen Fin (Mexico’s Black Friday) and the holiday shopping season given prevailing supply restrictions across the world.

Regarding fundamentals, we believe they will keep improving gradually. The most positive surprise has been the strength of remittances, reaching new highs consistently. We also think that the improved epidemiological environment will benefit employment, especially in services. In this sense, it is also likely that we could see an additional rearranging in spending if epidemiological conditions improved substantially relative to current levels, reorienting spending towards services given pent-up demand for them. For 2022, the increase in direct transfers from social programs contemplated in the Fiscal Budget could also serve as a support for private consumption.

Considering this, we still expect 6.2% GDP growth this year, followed by a 3.0% expansion in 2022. We believe that the external sector will remain as the main driver for growth. Nevertheless, we expect that private consumption will continue playing a key role in the recovery, especially relative to other sectors like investment, which will probably keep lagging.