Mexico: Retail sales grew for an eight month in a row in March

Growth of 3.8% y/y in March. This was higher than consensus (2.7%) but lower than our estimate (4.8%). With seasonally adjusted figures, sales grew 3.6% y/y. This remains associated with less distortions from the pandemic as base effects normalized further, although it will probably take more time for them to be completely erased. With this, retail sales were up 5.6% y/y in the quarter, above the 5.2% of 4Q21. The month was characterized by a further improvement in COVID-19 cases and mobility (with absolute levels above pre-pandemic benchmarks since February). Nevertheless, price pressures continued, with the annual rate at 7.45%, a new high since January 2001.

Sequential growth for an eight month in a row. Retail sales were up 0.4% m/m, accumulating a 3.8% advance since July last year. Although lower than our expectations, it is consistent with the relative improvement in fundamentals such as employment and banking credit. Remittances slowed down, but a higher exchange rate (adjusting strongly at the beginning of the period as a reaction to the war in Ukraine) likely helped. By sectors, 7 out of 9 were higher. Among them, we highlight office and leisure (3.7%) and internet sales (3.0%), likely reflecting preparations before the Easter holiday period. Other positive sectors included glass and hardware (2.0%), and appliances, computers, and decoration (1.6%). We should mention that healthcare products barely grew 0.7% (after a 7.8% decline in February). We expected a larger increase due to the base effect and possibly boosted by advanced payments of social programs due to the electoral ban, concentrated on the elderly in this period. On the contrary, clothing and shoes (-1.4%) and supermarket and departmental store sales (-0.1%) declined. Within the latter, the decline centered in departmental, lower by 1.4%. This may be suggesting that people started to cut on purchases of non-essential goods as inflation takes a toll on real wages. However, and considering some distortions from base effects, we will remain on the look about their performance ahead to corroborate this. Lastly, vehicles and fuel rose 1.4%. Inside, autos rose 1.0%, relatively consistent with advanced sales data from AMIA. Meanwhile, fuel sales increased 3.2%, boosted by higher mobility. 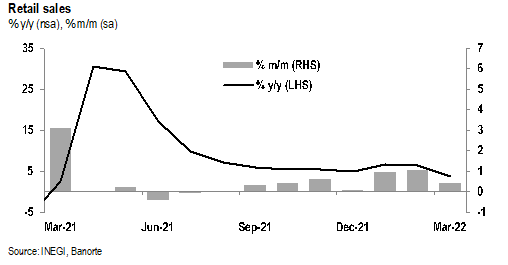 Despite its relative resiliency, headwinds for retail have been rising. Domestic demand will likely decelerate in coming months, affected by both global and local drivers. In this respect, IMEF’s non-manufacturing PMI fell at the margin in April, with the most significant setbacks in ‘new orders’ and ‘production’. Nevertheless, they remained firmly in expansion. April’s available hard data has been positive. Vehicle sales stood at 83.5 thousand units according to AMIA. Based on our calculations, this translates to +6.0% m/m (sa) and has been quite strong in the last five months. ANTAD sales accelerated at the margin, with total- and same-stores up 8.1% and 6.1% y/y in real terms, respectively.

We continue seeing price pressures as the strongest headwind. Globally, trade problems worsened since late March as Shanghai entered stricter lockdowns, encompassing the entire city by April 5th. Although this probably affected exports more –in terms of aggregate demand–, it is poised to have influenced consumption goods imports. In turn, it may have reverberated in prices of goods other than food. On the latter, we point out that, according to several outlets, the US is in the middle of its worst bird flu outbreak in years. Since January, the CDC has counted 38.0 million cases of A(H5) flu in backyard and commercial birds as of May 25th. This virus is highly pathogenic, with 35 states affected. In Mexico, border states such as Durango and Coahuila have also been impacted, with 1.8 million birds sacrificed until May 19th. Coupled with increasingly difficult drought conditions in other states such as Sinaloa, Chihuahua, and Nuevo León, underlying pressures for agricultural goods remain.

In this backdrop, the government’s Plan Against Inflation will try to limit further price increases. Among the measures, zero tariffs on 66 out of 72 tariff codes started on May 17th and will be in place for one year, with the possibility of extending them for one more. The six remaining ones include live animals, pending further authorizations. As stated before, it is our take that their effect on inflation will be quite modest, to which we should also consider possible lags.

Given this outlook, we are closely following employment and real wages. As of March, total payrolls rose 5.5% y/y in real terms, supporting the case of underlying strength in consumption fundamentals. Nevertheless, this has been mostly due to the first factor. Specifically, the average hourly wage fell 2.4% y/y in real terms in the same period and has contracted since October 2021. As stated elsewhere, we think a slowdown is likely at least for the second quarter, with our GDP estimate at +0.3% q/q. In this backdrop, we cannot rule out job losses if there is a more protracted deceleration. In turn, this would result in lower total payrolls, limiting consumption growth. On a more positive note, remittances remain very strong, while banking credit keeps recovering.