Retail sales declined 5.1% y/y in November, highest in 8 months. This was higher than consensus (-6.2%) and much closer to our -5.2%. This is its sixth consecutive month higher in annual terms, reaching a maximum since March 2020. Nevertheless, and as we have mentioned repeatedly, the result is distorted to the upside because of the extension of discounts during El Buen Fin (Mexico’s Black Friday) In this respect, it should be recalled that this initiative ran officially from the 7th to the 20th (with some companies maintaining them until the 22nd). On the contrary, the period had one less working day in the annual comparison. Hence, the degree of distortion is even more noticeable when looking at seasonally adjusted figures, with November at -4.7% y/y from -7.1% in October. This result is also positive in light of the deterioration in epidemiological conditions since late October. Nevertheless, these were not very noticeable in the mobility indexes that we track, which may have helped performance, particularly in the informal sector. On a year-to-date basis, retail sales accumulate a 9.7% y/y contraction.

Differentiation among categories in the monthly comparison. Total sales grew 3.3% m/m, accelerating significantly relative to the -0.2% observed in October (revised from -1.4% originally). Given this and the accumulated advance since the reopening began in May/June, the absolute level is 3.2% below those seen in February, before the COVID-19 shock. Moreover, it is similar to those registered in mid-2016. The dynamism observed by category helps reinforce our view that El Buen Fin was an important driver of the results, despite some surprises in the details.

Specifically, we highlight the performance of some categories in which discounts were among the highest. In this sense, the head of Mexico’s Consumer Protection Agency (PROFECO, by its acronym in Spanish), Ricardo Sheffield, mentioned that goods with the highest demand and/or interest to be bought by consumers included home appliances, computers, mobile phones and TVs, followed by clothing and furniture. In addition, departmental stores such as Liverpool and Sears were among those with the most attractive discounts. As a result, we observed good figures in departmental (11.9%), and clothing and shoes (3.9%). In contrast, appliances and computers declined 1.6%, which surprised negatively, although it could be skewed due to some double-counting with departmental stores. Internet sales were up 0.7%, which looks modest given worse epidemiological conditions (with healthcare up 1.6%). Nevertheless, PROFECO stated also that most sales were still made in physical stores. Food and beverages (0.7%) and supermarkets (0.5%) were relatively limited, possibly due to their essential status. On the positive side, autos –high ticket items typically bought with credit– picked up 3.3%, while glass and hardware reached 4.1% after a very good performance in October. 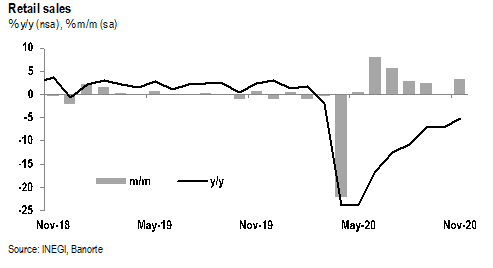 Positive results, but cautious about higher short-term risks. Despite all the caveats already mentioned, we believe the report was positive, with a stronger result than suggested by advanced data at the time. We advise to take these results with caution, as consumer behavior may have been modified by direct and indirect effects stemming from the pandemic. In this respect, data already known for December point to a significantly weaker print in the period. Among them, ANTAD’s total sales dropped 6.7% y/y in real terms after advancing 1.8% in November, with departmental stores plunging -11.3% (previous: +3.9%).

These were likely affected by worse epidemiological conditions, remembering that key states in terms of activity, such as Mexico City and the State of Mexico, returned to ‘red’ in the traffic-light indicator, which meant higher restrictions to open non-essential businesses.

Nevertheless, we also think that a further hit resulted from a shift in consumption patterns, bringing forward holiday expenses to November to take advantage of the discounts. On the contrary, purchases of big-ticket items remain challenged, with AMIA data showing domestic vehicle sales falling 19.4% y/y in December, very close to the -23.5% observed in November. On the other hand, consumer confidence seems to be consolidating after the recovery accumulated since the low last May. Specifically, we note the latter has been pushed higher mainly by the increase in components related to expectations, both for households and the country. We do not rule out that this has been highly influenced by news about the vaccine. Therefore, some retracement in optimism may be in store given the relatively slow start of the vaccination process. In turn, this could dampen consumers willingness to spend, given higher uncertainty about the virus and how high are the prospects for a return to ‘normality’.

With this result and considering the risks for December, retail sales are likely to have declined around 9.5% in full-year 2020. This estimate incorporates a contraction close to 4.8% m/m in the last month. Nevertheless, we will heed the trade balance report for said month to be released on Thursday, which should help us assess performance better. For 2021, we believe the recovery will continue at a modest pace, underpinned by the gradual strengthening of labor market conditionsand resilient remittances. Overall, we expect private consumption to rebound 6.5% this year, albeit only after falling more than 10% in 2020.