Minimum wage set to increase 20% in 2023. Today, the National Commission for Minimum Wages (CONASAMI, in Spanish) announced a 20% increase in the minimum wage (MW) starting on January 1st, 2023. Once again, this is composed of two factors: (1) An increase in pesos related to the Independent Recovery Amount (MIR, in Spanish), designed to protect Mexican households’ purchasing power; and (2) a percentage increase above this updated amount, linked to inflation. In this respect, the National Minimum Wage will stand at $207.44 from $172.87 per day (see chart below to the left), comprised of an increase of $15.72 in the MIR plus 10.0%. Hence, the total hike stands at 20% (see table below for details). We should mention that average inflation so far this year (until 1H-November) has been 7.9%, which would imply a recovery despite additional pressures for the rest of the year. Remembering that the Minimum Wage for the Northern Border was introduced since 2019, the latter will pick up by the same magnitude (20%), with the MIR up by $23.67 and the same inflation adjustment of 10.0%.

More ambitious target towards the end of this administration. The announcement comes in a context in which the target for the minimum wage has been increasing. In this sense, it should be noted that, at the beginning of this administration, the goal was for the minimum wage to increase 100% relative to its level at that time (of $88.32), which implied reaching $176.72 by 2024. With the increase announced today, this amount has already been exceeded. After this, and according to press reports, the target was reconsidered towards the end of 2021 due to a more adverse inflationary backdrop because of the pandemic. In particular, it rose to $226 per day, which means that a 10% gap remains to be filled with the upcoming MW. However, it seems that the objective was adjusted again in the middle of this year. Specifically, the president of CONASAMI, Luis Munguía, commented that a target of $260 a day is being considered by the end of this administration due to the impact of energy price pressures –as well as other goods, especially food items– and the war in Ukraine. Therefore, an advance of around 25% would be needed by 2024 to reach the target. On the other hand, Munguía commented that the target level is not fixed and can be negotiated in the Board of Representatives.

Additional progress needed to cover the ‘Poverty Line in Urban Areas per Family Unit’. In its 2021-2024 Institutional Program, the CONASAMI proposed reaching 100% of the ‘Poverty Line in Urban Areas per Family Unit’ (PLUAF). The latter is a monetary reference of the minimum income necessary for a family to buy the food and non-food basket each month in urban areas. It is calculated from CONEVAL’s estimate of the ‘Urban Income Poverty Line’ (individual) –which contemplates a basic basket of food and non-food goods and services–,then multiplied by 1.7 times to convert it to a family unit. Until October 2022, the equivalent monthly income based on this line would be around $7,155.18 (see graph below, left). Meanwhile, the monthly income with the minimum wage that will take effect next year is $6,223.20. Therefore, the gap would remain. To close it at the beginning of 2024 –and applying our forecast of 5.7% for core inflation in 2023 to the PLUAF in order to add an inflationary impact– the MW would have to rise another 22%. Considering this, we believe that the adjustment for 2024 could be around 22-25%, which in our view is high.

Similar to the previous year, the agreement was unanimous, expecting a benefit for 6.4 million workers. According to comments from the CONASAMI and from the minister for Labor, Luisa María Alcalde, the agreement was unanimous, supported by government entities, worker’s unions, and the private sector. On the other hand, and similar to previous years, this hike would benefit a greater share of the population. According to the National Employment Survey (“Encuesta Nacional de Ocupación y Empleo”, ENOE, in Spanish) 31.9% of the labor force earned up to one MW as of 3Q22 (vs. 24.1% as of 4Q21), totaling around 18.3 million people (see chart below, right). According to Munguía, around 6.4 million formal workers will be benefitted. Assuming all of them are workers affiliated to IMSS, this would correspond to close to 29.6% of total employees. In our view, this distinction is important as enforcement is likely to be much stronger in the formal than the informal sector.

CONASAMI anticipates a limited effect on inflation. On his Twitter account, Munguía affirmed that the Commission’s research points to a practically null effect on headline inflation from this increase. Specifically, he said that the 20% increase could imply an increase of 0.12% in headline inflation. Among the papers studied, we highlight one that calculates the additional labor cost each year due to the increase in minimum wages. The latter is based on IMSS’s formal employment microdata. To provide more context, the minimum wages applicable for 2022 were $260.34 per day at the Northern Border and $172.87 for the rest of the country. Consequently, they calculate the additional wage that should be given to those earning less than these minimum wages to fill the gap. For example, a person who earned $150 per day in December 2021 would require $22.87 more to reach the new wage of $172.87 (for the rest of the country). This represents an increase of 15.2%. Applying this procedure to every employee in the formal sector who earns less than the new minimum wage, the total additional labor cost in the formal sector can be estimated.

It is important to use the total payroll because an increasing number of people will need to be compensated to achieve the new MW as it rises, it. This also increases the total cost. Lastly, the additional cost is presented as the percentage of the total payroll, therefore approximating the effect on companies’ labor costs. For 2022, CONASAMI calculated that the additional cost was only 1.8% of the total payroll at the Northern Border and 1.2% for the rest of the country, which is quite low (see graph below). In this backdrop, the paper also emphasizes that the labor costs represent only 9% of total companies’ costs, according to 2020 Economic Census. Despite of the latter, it is important to emphasize that: (1) These figures only take into account the direct and marginal impact of the increase in total labor costs and exclude the ‘lighthouse effect’, which refers to the upward influence that the increase may have on other wages in the economy; and (2) it does not consider the potential costs that it may represent in terms of higher job instability, especially in the event of a migration of employees from the formal to the informal sector. Finally, if the increase implies losses in total jobs, the labor cost would tend to be lower than calculated. 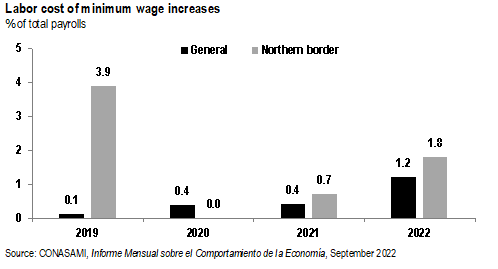 Pressures in some sectors due to higher input costs during the last two years. This is due to an environment of higher raw material prices for businesses due to supply chain issues and the war between Russia and Ukraine, among other factors. The chart below on the left shows the accumulated increase in the last two years on PPI for some sectors, when pressures in raw materials prices from said shocks exacerbated. We highlight Agriculture; Construction; and Lodging & Restaurants among those which have had the largest increases. Moreover, the graph below to the right shows that PPI excluding oil had a stronger cumulative advance than CPI up to August. In this context, the increase announced today –which will apply to a higher percentage of the population– might represent additional challenges in these categories, as is partially alluded by CONASAMI in the previous study. Consistent with this, sectors with the highest input pressures are very similar to those that Banxico identified yesterday in its Quarterly Report –also including Commerce– as those in which the minimum wage increases translate more strongly into the Average Wage at IMSS (AWI). Said similarity seems relevant to us and suggests the possibility that the increase announced today could have a higher impact on CPI items such as food (processed and agricultural foods), dinning away from home, and even housing. In addition, we think this increases the risk that annual core inflation takes longer to decline towards levels more consistent with the central bank’s target.

Meanwhile, we believe the ‘lighthouse effect’ will likely remain moderate. Recent dynamics and available data for this year suggest that the impact from the minimum wage increase on the rest of the wage distribution –through the so-called ‘lighthouse effect’– remains limited. In this sense, so far in 2022 (with figures until October), the AWI has increased little less than half of the MW. This is in line with dynamics seen in 2021 and quite similar to the average observed since 2017 (chart below, right). Therefore, we believe the 20% increase for the MW in 2023 could have an impact of around 10% in the AWI.

All in all, we believe the available evidence points to a scenario in which the minimum wage increase will have a moderate impact on headline inflation. However, its effect could be higher for the core. Firstly, due to the strong and diverse cost pressures that companies have experienced, which have eroded profit margins. Among them, we highlight goods producers, including in food items. Considering the minimum wage increases already accumulated in recent years and higher mid-term inflation expectations (currently at 4%), we will analyze closely its potential impact on CPI dynamics. In this backdrop, we reiterate our year-end 2023 inflation forecast of 5.4%. The core would be higher, at 5.7%. The latter is explained, at least partially, by our view that cost pressures and this MW increase will limit a faster decline despite a higher reference rate by Banxico and a potential economic slowdown. Lastly, the 20% increase is quite in line with our previous expectations, so we do not adjust our estimates even though it could add some risks to our forecasted path.