Mexico: May inflation – Remains relatively pressured in both components

Inflation at 0.20% m/m in May. This was above consensus and our estimate, even after a strong upward surprise for the market in the first half. Monthly inflation is seasonally low due to the second round of electricity tariffs discounts, which fell 21.3% m/m. Nevertheless, it was quite high relative to its 5-year average of -0.30%, (ex 2020 because of the pandemic). At the non-core, other energy items were more positive, such as LP gas (-1.3%) and low-grade gasoline (0.2%). On the contrary, and despite a slight moderation of the country’s droughts in the 2nd half –which have been the most severe since 2011–, fruits and vegetables remained high at 2.9%. At the core, goods stayed pressured (0.6%), particularly processed foods (0.8%). ‘Others’ (0.4%) moderated at the margin on Hot Sale discounts, albeit modestly relative to declines in the previous year. Services (0.4%) gained some momentum, highlighting ‘others’ (0.7%), possibly still resenting past input cost increases, such as food and energy items, along the reactivation of economic activity. 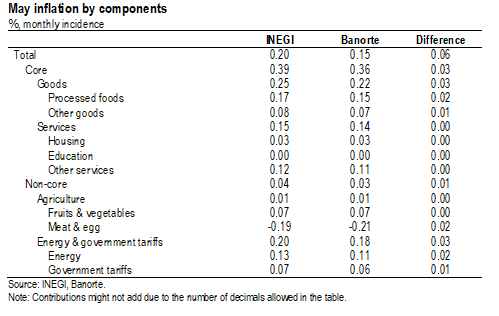 Annual inflation should keep falling in coming months. This metric declined to 5.89% from 6.08% in April as challenging base effects start to gradually fade out. On the contrary, core inflation was higher, at 4.37% from 4.13% in the same period. We expect the former to remain on the downside, as last year’s pandemic shock resulted in an abrupt decline in headline inflation in April 2020, mainly on lower energy prices. After this, base effects will gradually become less challenging, at least until September/October. As a result, we see annual inflation falling close to 5.0% by the beginning of 4Q21. Despite of this, we expect inflation to stay relatively high, with several supply-side issues still affecting price dynamics (e.g. lack of raw materials, difficult weather for food items, still high commodities prices) along a possible reweighting of spending towards services instead of goods as vaccination campaigns progress and people go out more. On the positive side, transportation costs seem to be moderating at the margin. All in all, we still see some cost-push pressures lingering around. In this sense, our year-end inflation forecast at 5.5%, consistent with an average of 5.3% for 4Q21, remains more elevated than most analysts’ view and Banxico’s recently updated forecasts. Given this, a more vigorous economic recovery, and the high likelihood of the Fed announcing tapering in 2H21 (likely in September, to start early next year) –which could impact market dynamics, including the FX rate–, we still expect the central bank to hike this year. Specifically, we see two 25bps increases, in November and December, with the reference rate ending 2021 at 4.50%.

The local yield curve is likely to hold its recent flattening bias. The new upward CPI surprise is likely to result in some profit taking in Mbonos after the strong performance during the week, though holding a flattening bias given the Treasuries’ rally ahead of the US inflation report tomorrow. In our view, this inflation backdrop validates the current pricing in the yield curve for Banxico, incorporating implied hikes for 43bps by year-end. Meanwhile, Udibonos will hold the positive performance in recent days that was also reflected in strong appetite for Udibono Nov’31 auctioned yesterday, where inflation breakevens have decreased from mid-term readings onwards, however are still elevated in short-term marks. This reflects a market that integrates inflation pressures prevailing in the short-term. In this sense, the 3-year breakeven stands at 4.34%, close to fresh highs since 2017 reached at the end of May.