Mexico: IP – Upward surprise in March, driven by a rebound in construction

Industry better than expectations in March. The indicator reached 2.6% y/y (see Chart 1), higher than consensus which matched our call. This is also better than the implied growth for March in the 1Q22 preliminary GDP of 2.0%. Considering revisions to January and February, industry grew 3.1% y/y in the full quarter, which is better than said report. As time passes by, base effects are leaving behind the distortions introduced by the pandemic, helping gauge the underlying trend more clearly. In this sense, manufacturing led at 3.6% y/y, while construction stood at 3.0% and mining was negative at -1.3%. For details, please see Table 1.

Modest rebound, albeit still with some warning signs. Industry rose 0.4% m/m (Chart 3), moderate considering last month’s 1.2% drop –despite being influenced by a base effect–. Unfortunately, total activity has not fully recovered after two years since the pandemic broke, standing 1.4% below February 2020, and -5.2% vs. its historical high in September 2015 (Chart 4). In our view, further inflationary pressures –with producer prices excluding oil accelerating to 9.0% y/y in the period– are still limiting some sectors.

Despite of this, construction surprised to the upside at 3.7%, with some revisions suggesting that it had not been as negative as portrayed by previous figures. Inside, all three subsectors were higher, with edification leading (4.4%), and civil engineering rebounding 1.7%. We believe the latter may have been benefitted by works ahead of the official inauguration of the Felipe Angeles Airport on March 21st.

Mining was down 0.6%, extending the -6.4% seen in February. Despite higher volatility in the data (mostly because of ‘related services’, which has had very sizable adjustments), this was driven by oil and gas (-1.6%). In turn, available figures from the National Hydrocarbons Commission showed lower oil production at the margin and a modest uptick in gas.

High prices keep boosting flows in the trade balance, but production remains limited by capacity, among other issues. Non-oil fell 0.8% despite a possible boost from higher prices. Lastly, ‘services’ were still volatile at +8.6%.

Last but not least, manufacturing dropped 0.2%, breaking with five consecutive months of growth. This contrasted with the signal from IMEF’s PMI manufacturing, employment, and a resilient demand in the US. Inside, only 8 out of 21 sectors were positive, as seen in Table 2. Among these, we highlight transportation equipment (0.7%), which had backtracked in the first two months of the year. We also saw some strength in clothing (0.6%) and metallic products (0.5%). On the contrary, food (-0.4%) and beverages (-4.8%) were among the worst performers, which is important considering that these categories remain among the most affected by price pressures. Others with relevant declines include textile inputs (-2.8%) and other textiles (-2.5%), along with oil and carbon (-1.5%) and electronic equipment (-1.2%).

COVID-19 restrictions in China, price pressures, and the war suggest an industry slowdown in the second quarter. As mentioned above, these results imply an upward revision to 1Q22 GDP. Nevertheless, we are more concerned about dynamics ahead as most news has been negative since March.

First, potential indirect effects due to the war in Ukraine may still be in the cards given the sanctions imposed by a plethora of countries. Although Mexico has not joined them, some disruptions are likely given the interconnection of global supply chains. The effect will probably be limited, as the most relevant goods that Mexico imports from both Russia and Ukraine include fertilizers (natural and chemical), aluminum, wheat and cooking oil, more closely related to the primary sector. Second, and with a potentially higher impact, trade disruptions because of COVID-19 lockdowns in China were likely not meaningful in this report. Their latest outbreak began near the end of February, with lockdowns in the port-city of Shanghai starting until March 28th and measures encompassing the entire city until April 5th. Logistics issues –especially in maritime transportation– worsened from that date onward, affecting global supply chains once again. In this sense, Mexico’s Economy Minister, Tatiana Clouthier, stated that industry is facing delays of up to 60 days in shipments from China because of this. According to the Institute for Industrial Development and Economic Growth, Mexico is highly dependent of intermediate goods imports from this country in the electronics, electric, automotive, textile, and plastics sectors. This week, Shanghai imposed even harsher restrictions, which may result in even longer delays. Although several companies are looking for new suppliers, this is not either easy or very quick to do. In our view, risks are clearly to the downside despite manufacturing staying so far resilient. This is especially the case in the US based on the PMI for April, positive for Mexico despite domestic market weakness.

In construction, several issues remain. The president of the Mexican Chamber of the Construction Industry, Francisco Solares, recently said that some of these headwinds include insecurity, high bureaucratic burdens and inflation. On the latter, he estimates that input inflation is running at up to 17% y/y, with rebars and steel among the most pressured items.

This problem has also been pointed out by the National Chamber of Housing Development and Promotion (CANADEVI, in Spanish), which sees more challenges to attend housing needs for low-income families as profitability erodes. To counter this, one initiative includes helping migrants abroad to acquire a house in Mexico. Meanwhile, dynamism in financing may moderate as interest rates rise, especially for the private sector. The latest banking credit report showed that mortgage credit rose 3.4% y/y in real terms in March, maintaining some stability, albeit remaining weak in low-income housing. On a more positive note, the main government housing finance agency, INFONAVIT, recently announced that: (1) They will maintain mortgage rates unchanged until 2024 (with a range from 1.91% to 10.45%, depending on the beneficiary’s income) as part of the government’s Plan against inflation; and (2) starting in May, they will allow workers to convert their existing mortgages denominated in “times of minimum wage”, influenced by inflation –among other factors– to pesos. Although these measures could help, it is our take that construction keeps facing very difficult challenges.

Lastly, in mining, we note PEMEX’s 1Q22 earnings. As expected, the company’s finances improved because of higher prices. Crude oil production grew 2.3% y/y to 1,755kbpd on average due to the incorporation of new fields and higher production in others. Nevertheless, they cut their full-year 2022 production estimate to 5.3% y/y from +8.4% in the previous quarter. We still see operating and financial challenges at the company as maintaining risks to the downside and resulting in muted growth ahead. 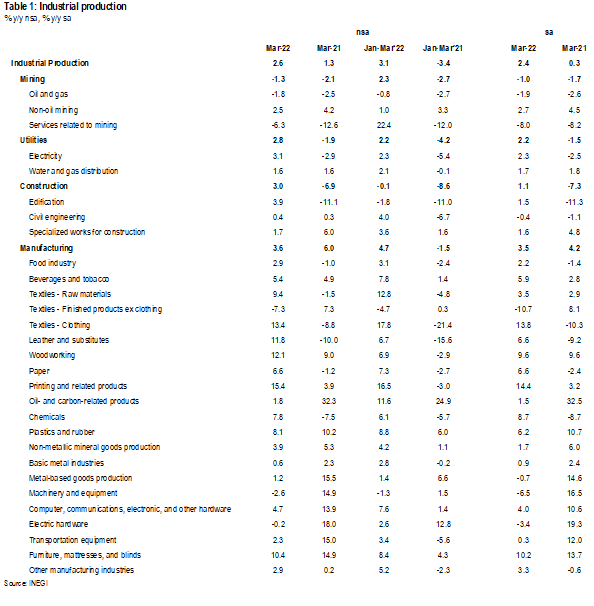 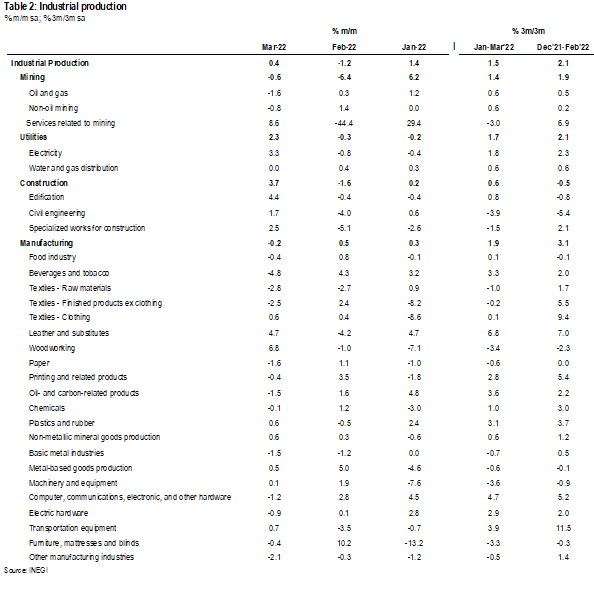