Industry keeps recovering in annual terms. The sector rose 2.6% y/y (see  Chart 1), lower than consensus (2.9%) but higher than our estimate (1.6%). Using seasonally adjusted figures, growth was 3.5% y/y. This is much better than the 2.7% within INEGI’s Timely Indicator of Economic Activity. Inside and with original data, manufacturing remained as the main driver (5.1%), followed by mining at -0.8% and construction at -1.0% (see Chart 2). For details, please refer to Table 1.

Sequential uptick, driven by strength in manufacturing. Industry rose 0.4% m/m (Chart 3), adding five consecutive months of gains. As such, in this period it accumulates a 1.8% expansion. With this, production stands practically in line with its pre-pandemic metric (February 2020) but is still 3.8% lower than its historical high in September 2015 (Chart 4). Manufacturing climbed strongly at +1.6%. This is consistent with a better scenario in the US, with the same indicator showing a positive rate. Locally, the impact of the fifth COVID-19 wave was lower in the labor market and, therefore, in production. Both factors are in line with IMEF’s manufacturing PMI, with improvements in ‘new orders’ and ‘production’. By categories, there is a slight upward bias, with 13 out of 21 subsectors higher (Table 2). Some of the largest increases were in oil and carbon (+18.0%) and transportation (+6.0%), to name a few. Meanwhile, declines centered on clothing (-6.7%) and chemicals (-1.6%).

Construction fell 0.9% and is up only 0.7% so far in the year, failing to establish a clear upward trend. The sector continues to face higher input costs, which affected business confidence. The main drag came from specialized services (-4.3%) breaking with four months of increases. Meanwhile, edification (+0.3%) and civil engineering (-0.3%), were more modest, impacted slightly by base effects from the previous period.

Lastly, we highlight mining at -2.5%. This reflects volatility in ‘related services’, a constant so far this year. Specifically, it decreased 18.7%, impacted by a difficult base effect. In the remaining categories, oil advanced 0.3%, in line with data from the National Hydrocarbons Commission, which indicates higher gas extraction, partially offset by a slight drop in oil. Non-oil added a second month of gains at 0.8%, apparently with little effect in production from the moderation in commodity prices.

We will closely follow the evolution of risks, although remaining optimistic about US demand. Today’s figures suggest that the three major components remain impacted –to a greater or lesser extent– by different shocks or disruptions that have taken place in recent years. In this sense, we believe that industry still has room to continue recovering and that, in the short-term, it will be determined by the evolution of said risks.

Analyzing the likely performance of the US, uncertainty about a recession is still present –according to the latest Bloomberg survey, the probability of a recession is at 50%. It is also true that expectations about activity and the main components of demand remain relatively positive. On consumption, it is expected to expand 1.4% q/q saar and 1.5% in the last two quarters of the year; private investment is seen at 2.0% and 1.6%, respectively. Likewise, consensus expects industrial production in these periods at 4.4% and 3.4% y/y. This could be explained by supply chain improvements. In this regard, delivery times are shorter, maritime transportation costs are decreasing (the Baltic Dry index maintains a downward trend since mid-May and is at levels not seen since November 2020), greater stability in inventories, among others. Additionally, with lower energy prices, an eventual fall in inflation expectations may also add to the optimism. However, the S&P Global PMI manufacturing sets the negative note by continuing its negative trend, adding its third month lower in August, reaching 51.5pts (previous: 52.2pts), its lowest since July 2020.

Locally, the main risk comes from inflationary pressures and their expectations. More specifically, from costs of certain inputs for key industries –such as steel, natural gas, glass, aluminum, among others. In that sense, Banxico will stay with a hawkish stance for the rest of the year. This would materialize even if the shocks have mainly been from the supply side, with the central bank trying to control second-order effects. In this context, August’s total PPI (including oil) stood at 9.4% y/y, with manufacturing at +9.9%, and construction even higher at 13.6%. Considering other timely figures, IMEF’s manufacturing indicator fell below the 50pts threshold, with weakness centered on ‘production’ and ‘new orders’. This negative trend could be reversed in coming months if US demand stabilizes, supported by a strong labor market and a possible downward inflation trend. On the other hand, AMIA shows a rebound in auto production in August of 0.9% m/m, positive after two months of declines. These, despite technical stoppages still reported due to lack of inputs –as is the case of GM’s plant in Silao, which remained in this situation in the last week of August.

In mining, we could see a boost from the creation of the state-owned company LitioMx. The company will seek, in a decentralized manner, to exploit lithium deposits in 82 locations in 18 states of the Republic, as well as the administration and control of this mineral’s value chain. The decree establishes that the company must start operations in the next six months. According to the Federal Government, the door for private participation is open, with the Chinese company Ganfeng Lithium as the first to show interest. For construction, the scenario remains complex. We believe short- and medium-term dynamism will be based on government projects. An example is the Mexico-Toluca Interurban Train with plans to be inaugurated at the end of 2023.

Considering the latter, we maintain our baseline scenario for the second half of the year, with industry still growing, although more modestly. We anticipate that any improvement in US demand will likely have an immediate positive effect on domestic manufacturing. As already mentioned, we anticipate shocks in productive chains to improve in the remainder of the year, so the national industry capacity to respond will be adequate. 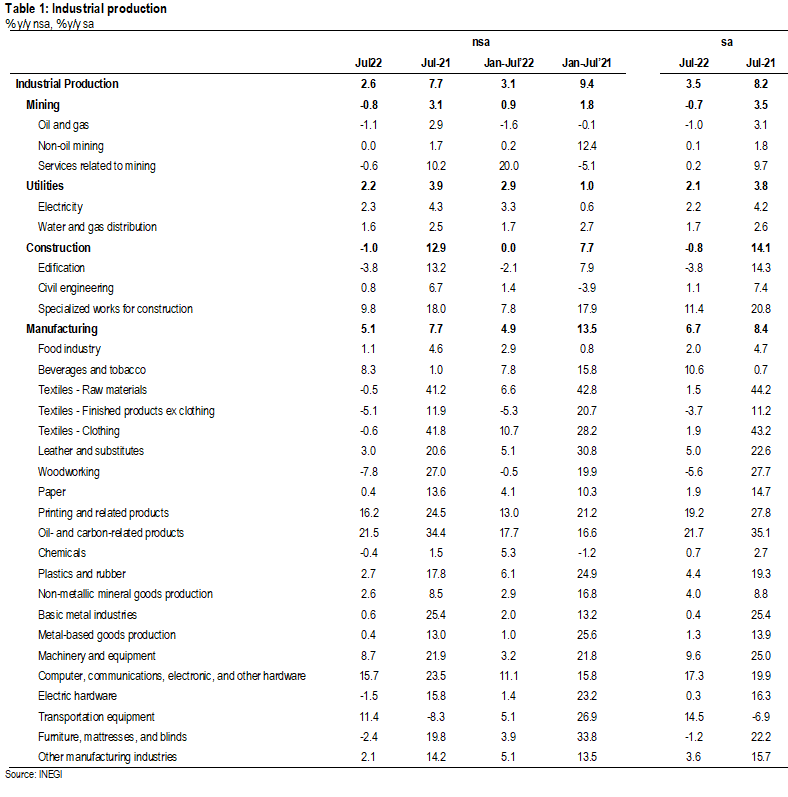 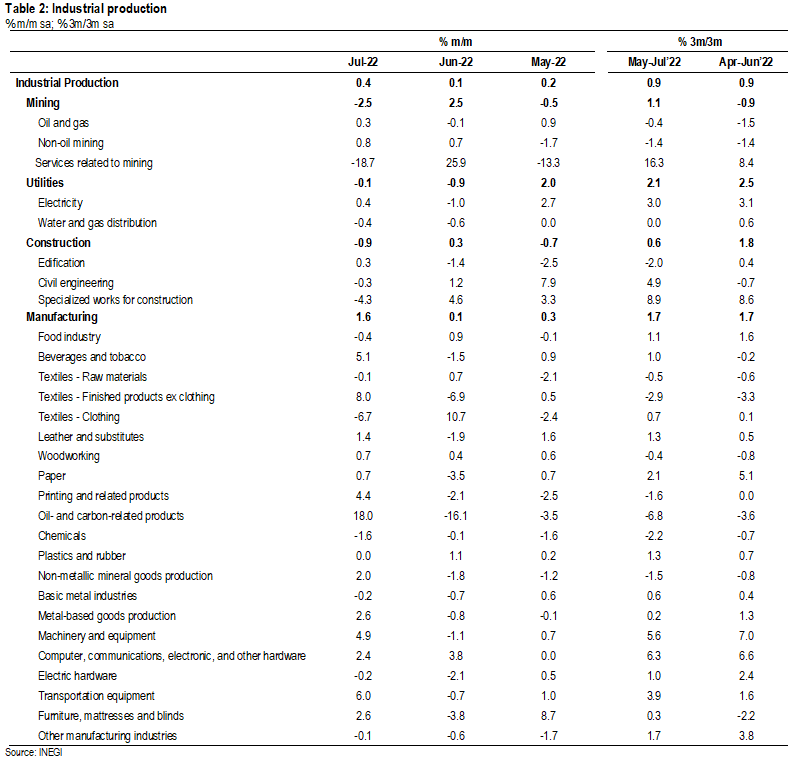