Industry stronger in annual terms. The sector picked up 3.8% y/y (see Chart 1), below consensus (3.9%), but higher than our estimate (3.5%). The period did not have a meaningful distortion from calendar effects, so growth with seasonally adjusted figures stood at 3.8% y/y. This was slightly stronger than the 3.5% within the Timely Indicator of Economic Activity. Back to original data, manufacturing maintained a high pace (5.1%), followed by mining (2.3%). Lastly, construction was more modest at 1.3% (see Chart 2). For details, please see Table 1.

Moderate sequential uptick, boosted by mining and construction. Industry rose 0.1% m/m (Chart 3), adding four months higher. With this, the sector is 0.5% below February 2020 –pre-pandemic benchmark– and 4.3% lower than its historical high in September 2015 (Chart 4). Mining went up 2.1%, more than enough to compensate for the -0.4% seen in May. The oil sector stood at -0.1%, contrasting slightly with reports by the National Hydrocarbons Commission showing a slight increase in oil production. On the other hand, the non-oil sector rebounded 0.8% after a 1.6% loss previously. Related services remained very volatile as they increased 24.4% in the period, with double-digit changes in five of the last six months.

Construction grew 0.3%, with the move led by ‘specialized works’, up 3.7%. Also positive, civil engineering kept improving, rising 1.4% after the 9.1% expansion in the previous month. In our view, this is mainly explained by the continuation of key projects –such as the Dos Bocas refinery and the Mayan Train–. On the contrary, edification fell for a second straight month (-1.5%), affecting the headline. We believe weakness in the residential sector –impacted by higher costs– keeps dragging the sector down, despite persistent appetite for industrial parks.

Manufacturing was unchanged at 0.0%. This is relatively favorable considering a challenging base effect after two months higher, and also the delayed effects from lockdowns imposed in China in previous months. In the US, daily COVID-19 cases remained high, while in Mexico, the rebound was relatively strong during the period, although seemingly having a modest impact on output. By sectors, only 6 out of the 21 were higher, as seen in Table 2. Among those with the largest improvements we note electronic equipment (+3.6%) and the food industry (+0.9%). On the contrary, we saw declines in transportation (-1.1%) –consistent with AMIA figures–, electrical equipment (-2.0%), and oil and carbon related manufacturing (-15.7%).

Cautious for the rest of the year, albeit with mixed signals. On the positive side, we stress that the NY Fed’s global supply chain pressures index has been falling since the historical high reached in December last year. The decline was generalized across components in July and has been hand-in-hand with the reduction in transportation costs as well as some raw materials, highlighting oil and gasoline prices (the latter falling even more so far in August in the US). On the contrary, July’s PMI manufacturing indicators warn of an additional slowdown. In the US, it dropped to 52.2pts from 52.7pts previously, its lowest in the last two years. This was driven by the decline in ‘production’, while ‘new orders’ corrected lower and at their highest pace in two years. In Mexico, it went from 52.2pts in June to 48.5pts in July, contrasting with the same indicator from IMEF. Specifically, the report stated that factories cut production, input purchases, and hiring. The rise in energy prices and droughts around the country were added as additional negative factors. Growth in new export orders was sustained, although there were weak sales to US clients –our main trading partner. On the other hand, highlights in both countries included: (1) A more modest pace in the rise of input prices, albeit remaining high; and (2) lower demand, in turn affected by the rise in consumers’ cost of living.

Taken together, this information is consistent with less supply chain problems in both countries, even though the situation remains fragile and with some challenges still to be solved. Moreover, and in our view more relevant, data suggests that the situation is shifting gradually to one in which lower demand is gaining more relevance relative to supply problems. Hence, it is affecting decisions on production, orders, and inventories. Lastly, it goes in the ‘right direction’ in terms of addressing strong price pressures in inputs and final goods.

In Mexico, other themes are worth evaluating closely. First, the Minister of Economy, Tatiana Clouthier, said that the consultations promoted by the US and Canada on Mexico’s energy sector will take place between August 14th and 19th. Our country’s Business Council (Consejo Coordinador Empresarial, in Spanish) is confident that an agreement can be reached during this period. Nevertheless, they also see the possibility that one of the four issues subject to complaints –the one that prioritizes electricity produced by CFE over private competitors in dispatching it to the grid– could reach the stage of international arbitration (dispute settlement panels) for a resolution. They do not foresee a potential exit from the treaty.

On the other hand, the Center for Economic Studies of the Private Sector (CEESP, in Spanish) has estimated that if the US and Canada win the case against Mexico in these panels, they could impose tariffs worth between US$10 to 30 billion.

On the other hand, given water scarcity in the northern part of the country (with CONAGUA declaring a ‘state of emergency’ in mid-July), President López Obrador ruled out that the government will grant more permits and concessions for the operation of the beer and soda industries in said region. As an alternative, he said that companies will have all the support from the government to establish operations in the south. This is relevant when considering that the ‘beverages’ industry accounted for 0.9% of GDP last year and about 3.0% of all industrial activity (in real terms). In the auto sector, light vehicle production in July reached 259,994 units (+10.9% y/y), contracting 1.5% sequentially based on our seasonal adjustment model. On August 3rd, the Ministry of Economy announced that panel hearings on the case initiated by Mexico and Canada against the US about the interpretation of rules of origin had ended. A final ruling is expected by late November and will be important for the relative attractiveness of our country in this sector.

Our base case for 2H22 is that industry will keep growing, although at a more modest pace. Apart from the abovementioned factors, we believe the main headwind is the likely deceleration of the US economy, in tandem with still high inflation. Jointly, these factors suggest lower demand in coming months in an environment in which supply chain problems have not been resolved fully yet, despite their gradual improvement. 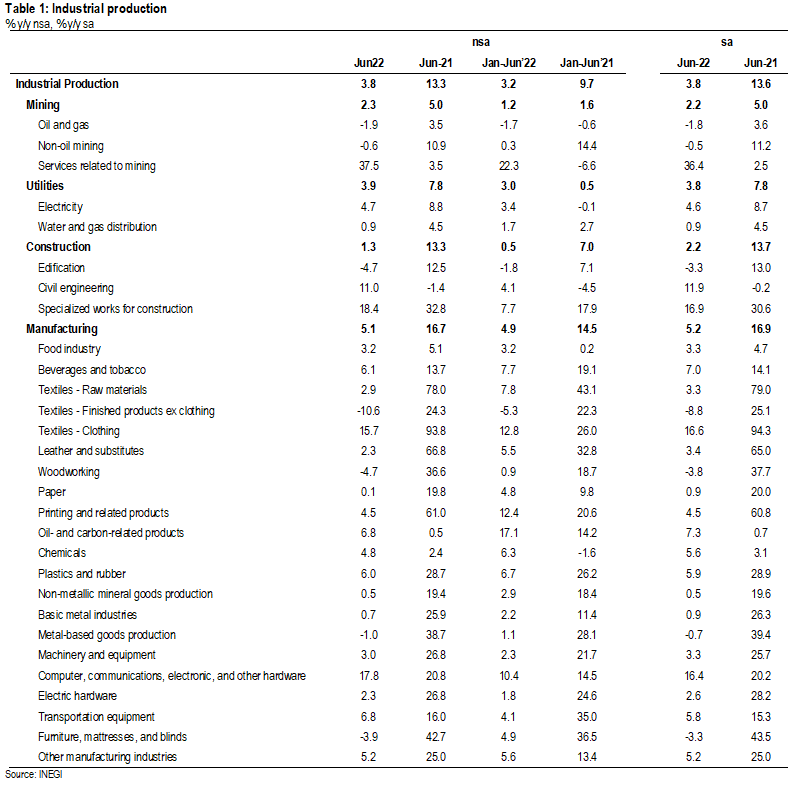 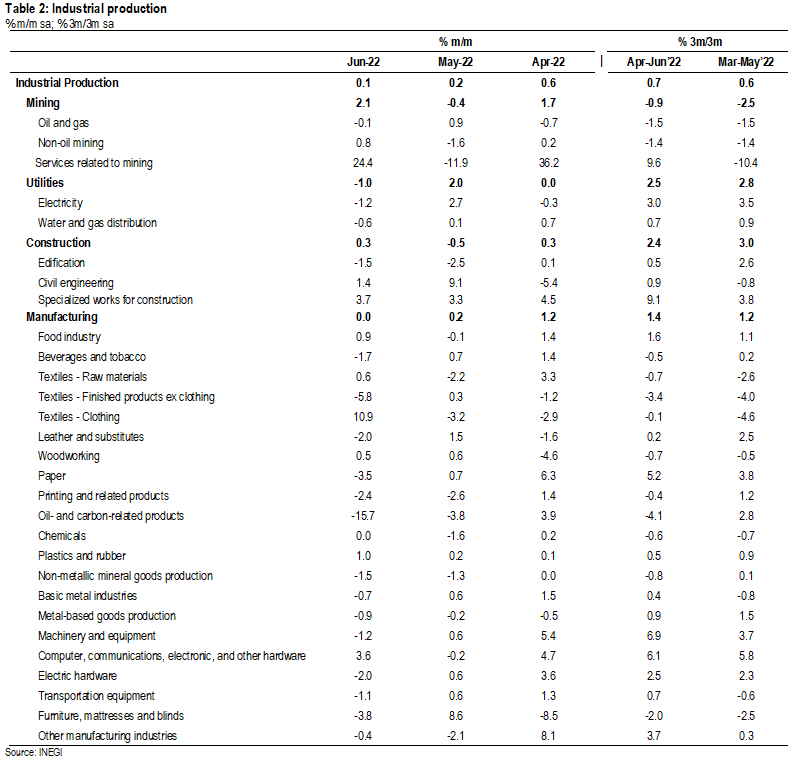