Industry below consensus in October. The indicator reached 0.7% y/y (see Chart 1), below analysts’ median expectations (1.8%), but closer to our 0.2%. Using seasonally adjusted figures, growth was 1.6% y/y, above INEGI’s Timely Indicator of Economic Activity, at 1.3%. Back to original figures, mining increased 1.1%, construction 2.9% and manufacturing was flat. For further details, please refer to Table 1. Industry has recovered 7.4% year-to-date after falling 11.0% in the same period of 2020.

Modest sequential uptick. Industry grew 0.6% m/m, in our view low considering the -1.1% seen in September, which also coincided with weak overall economic activity (Chart 3). Despite increased mobility as COVID-19 cases kept trending lower, supply chain issues and higher operating costs remain as headwinds. With this, activity stands 3.4% below February 2020’s level, which we use as a pre-pandemic benchmark, on top of being 7.3% lower than the historical high in September 2015 (Chart 4).

Manufacturing rebounded 1.8%, albeit only after strong contractions in the previous two months. Of the 21 subsectors, 11 were higher, as seen in Table 2. We note that transportation grew 6.8% after deep declines in both August and September. Therefore, the base effect has a meaningful impact, so it should be taken cautiously in terms of its signal about the state of the sector. In our view, the case is very similar for computers, communications and other electronic components (10.8%). We also note oil and carbon (3.6%), which picked up and is consistent with reports of a resumption of operations in the Tula refinery by the middle of the month, as it had to lower production recently because of roadblocks in the state of Hidalgo. Other categories with sizable growth included clothing (2.2%), metallic products (2.0%) and plastics and rubber (2.3%). In contrast, textiles excluding clothing (-6.7%), furniture (-2.3%), and machinery and equipment (-2.2%) were a drag for the headline.

Construction added a second month with a strong decline (-1.3%). Edification               (-1.4%) led losses once again. Meanwhile, civil engineering remained resilient (+0.1%), despite Federal Government data showing a moderation in capex spending and after strong prints in each of the previous three months. Related services stood at 1.6%.

Lastly, mining was up 0.2%, with oil at 0.1%. Available data on crude and gas from CNH showed stable output, possibly related to seasonal patterns due to the weather. Non-oil lost some dynamism (-1.1%), albeit only after having strung four months to the upside. Meanwhile, related services had a modest setback of 0.5%

One swallow does not a summer make. Today’s sequential pickup is welcome, although the tough operating environment for factories prevails. Therefore, we remain cautious about the pace of growth in the short-term. Markit’s manufacturing PMI for Mexico in November states that supply-side problems kept weighing, with raw material shortages, energy and transportation costs resulting in increasingly higher input costs. On top of this, the depreciation of the Mexican peso and a further lengthening of delivery times have also affected purchases, with inventories and production taking the hit. All these issues may be influencing demand more forcefully, with the report showing another decline in external sales. On the other hand, IMEF’s PMI manufacturing fell from 50.7pts in October to 50.3pts in November, albeit with production up and all other components lower. Meanwhile, US indicators were mixed, with the ISM slightly up at 61.1pts but with a marginal decline in Markit’s indicator to 58.3pts. Nonetheless, both are still firmly in expansion.

On a more positive note, there have been some news lately. Among them, the announcement by Constellation Brands that they will build a brewery in the state of Veracruz with an investment of US$1,300 million, after the cancellation of a similar project at the beginning of 2020 in Baja California. The CEO of Kansas City Southern de México said that 2022 is likely to be better as railway blockades in the state of Michoacán –lifted at the beginning of November– may have been solved and the shortage of semiconductors lessens. In addition, businesspeople and associations (e.g. CONCAMIN) keep seeing greater interest in Mexico’s logistics sector, with ample opportunities to capitalize from the shift to nearshoring strategies. Preliminary data from Pfizer/BioNTech suggests that a third dose of their vaccine is effective against ‘Omicron’, with other studies also pointing that it may be milder despite a higher infection rate. This is relevant as disruptions to global trade may linger around in case of additional restrictions to fight the pandemic.

In construction, November’s business confidence and aggregate trend indicators showed a generalized increase, signaling that a gradual recovery may be underway. According to the approved budget for 2022, the government is aiming to accelerate investment, focused on priority projects. Although positive                                 –especially for civil engineering–, uncertainty about the economic outlook exacerbated by new COVID-19 variants, higher raw material and energy costs are still among the most relevant headwinds for more sustained dynamism.

We keep monitoring news about public-private partnerships, which have been delayed. In this respect, the president of the Mexican Construction Chamber, Francisco Solares, said that these delays have prevented a stronger recovery. Specifically, he estimates that the projects announced in the first two packages have progressed about 30% relative to expectations. Going forward, he is confident that the third package will be presented with better conditions to be executed, which is likely the reason behind its current delay.

In mining, there have been some news about Pemex lately. Specifically, the Federal Government announced a US$3.5 billion capital injection for the company, as well as other liability management operations and other measures. The goal is to ease its financial burden and improve its operating performance. In this respect, they may be helpful for new production initiatives, despite ongoing challenges. On the other hand, crude oil prices remain high despite the recent correction on fears about COVID-19 and the release of strategic reserves by some countries. 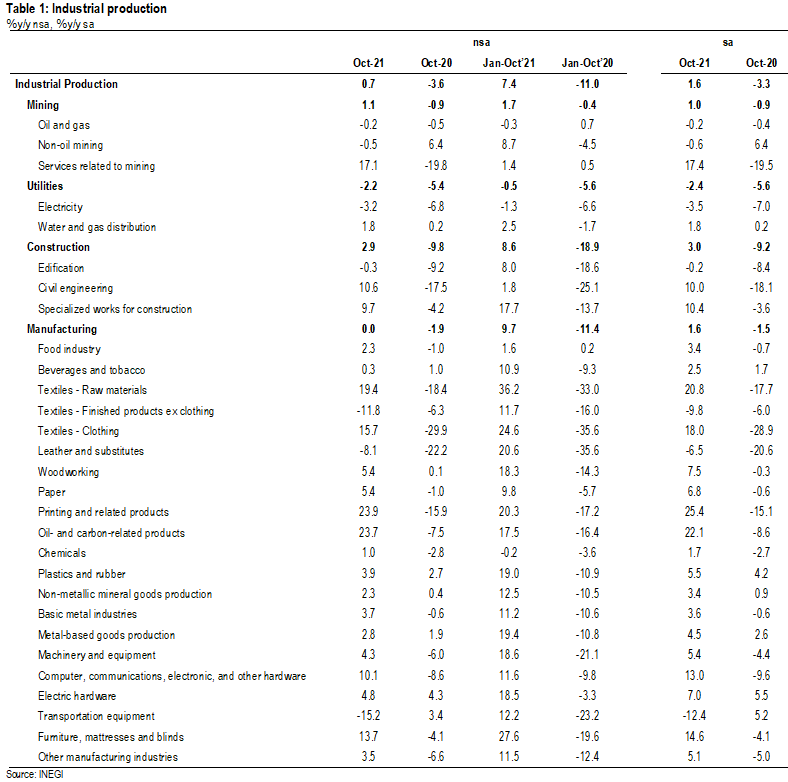 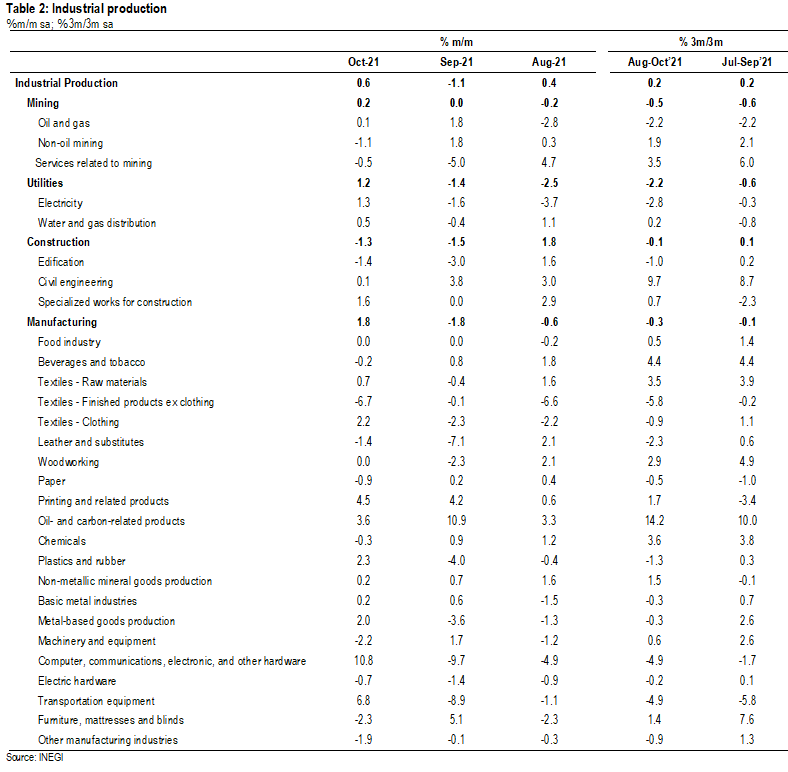