Mexico: IP – Growth continues in May, driven by manufacturing

Industry keeps advancing in annual terms. The sector increased 3.3% y/y (see Chart 1), higher than consensus (3.0%), which coincided with our estimate. This was favored by an additional working day compared to the previous year. Correcting for this with seasonally adjusted figures, growth was 3.1% y/y, lower than INEGI’s Timely Indicator of Economic Activity estimate (+3.3%). In detail and back to original data, manufacturing accelerated its pace, growing 6.1% y/y, followed by construction at -0.1%. Finally, mining decreased 1.8% (see Chart 2). For details, please see Table 1.

Modest sequential uptick, adding three months higher. Activity rose 0.1% m/m (Chart 3). With this, the sector is 0.7% below February 2020 –pre-pandemic metric– and 4.4% lower than its historical high in September 2015 (Chart 4). In our opinion, some factors likely limited performance. Broadly speaking, domestic inflationary pressures are still the main drag. PPI (without oil) in May was 8.95% y/y –construction: 16.70%, manufacturing: 9.90% and mining: 6.86%. Additionally, the shutdown of some Chinese ports and factories at the end of April started to have negative effects on production chains in various industries and several fronts –due to supply shortages, inventory management, higher transportation costs, delivery times, etc. To the latter we must add the deterioration from previous and persistent supply shocks (e.g. war in Ukraine and more Omicron cases).

By sectors, we highlight the -0.7% in mining. It is worth mentioning that this comes after a strong uptick of 1.4% in April. Significant volatility persists in ‘related services’, with a 16.9% contraction after +40.4% in the previous month. Meanwhile, there is a divergence in the two main items, with oil at +0.9% and non-oil at -2.3%.

In the first, the result is consistent with the National Hydrocarbons Commission’s report, in which we saw a slight increase in oil extraction and a marginal drop in gas output. On the latter, the decline is consistent with a moderation in prices.

Construction fell 0.6%, modest considering previous increases. Edification (-2.2%) was the main drag, although also having the most challenging base effect. Civil engineering rose 7.7%, which may be connected to a renewed push in key projects such as the Dos Bocas refinery and ahead of the June 5th election. Also positive, specialized works rose 6.1%.

Lastly, manufacturing grew 0.2%, with 11 of 21 sectors positive, as seen in Table 2. The monthly increase is consistent with some hard data, albeit disagreeing with sentiment indicators. In exports, the trade balance was positive (1.4%), with non-auto exports accelerating (2.0%) and autos moderating their decline (-0.1%). Intermediate goods imports also grew (0.6%). In contrast, IMEF’s manufacturing PMI, its US equivalent, and local business confidence, fell in the period. Looking at the breakdown, items with significant expansions were transportation (0.6%), beverages and tobacco (0.8%) and electric equipment (0.6%). On the contrary, we highlight oil and carbon (-3.5%) –consistent with reports of a decline in production at refineries–, chemicals (-1.1%) and electronic equipment (-0.2%).

Moderation towards the end of 1H22. So far this year, high uncertainty, various global supply shocks and higher dynamism of demand in certain regions have resulted in elevated prices and a change of central banks’ monetary policy towards a more restrictive stance. This has pressured production chains. Nonetheless, Mexican industry has been resilient, making progress over the period. However, this resilience may be weakening. June’s IMEF’s manufacturing indicator is below the expansion threshold, highlighting the slowdown in ‘new orders’ and ‘production’. INEGI’s manufacturing orders indicator show a similar trend, where 4 of the 7 subsectors declined. In the US, our main trading partner, the ISM manufacturing also fell in June and consumer confidence kept moderating, with a sharp drop in the expectations component. All this has been backed up by a gradual moderation in the second quarter of the year. However, such a slowdown may be brief. We maintain our view that manufacturing will be the driver in the second half of the year and that construction will provide an additional boost.

In manufacturing, although the auto sector has still not recovered its pre-pandemic levels of production, AMIA considers that supply chain issues seem to be recovering at a modest pace, and with it, both production and exports. In auto parts, the relocation of Asian companies to Mexico –as part of the trend to substitute imports from that region– is encouraging for the director of the National Auto Parts Industry. According to this organization’s figures, the sector has received US$524 million in FDI so far this year. Nearshoring has also benefited and will be a tailwind for non-auto manufacturing in the short- and medium-term. According to the IDB, potential gains from new manufactured exports in the country is equivalent to 2.6% of GDP.

Construction will also get a boost, especially edification. The Ministry of Finance reported that 4.7 million square meters are currently being built as industrial spaces. In addition, demand for this type of construction has increased by 42% compared to last year. On the other hand, we believe civil engineering works will be positively impacted by the federal project ‘Corredor Interoceánico del Istmo de Tehuantepec’, which includes the expansion and rehabilitation of railways and highways, modernization of the Coatzacoalcos and Salina Cruz ports, as well as construction of ten industrial parks along the Istmo, among other works. This comes on top of key projects such as the Dos Bocas refinery and the Mayan Train.

Lastly, we continue to see short-term uncertainty in mining, related to metal and energy prices –especially on the possible of an energy crisis in Europe during the coming winter. However, we believe public and private-public projects can stimulate the sector in the medium-term. Specifically, within the framework of the ‘Corredor Interoceánico del Istmo de Tehuantepec’, the development of a new gas pipeline –which starts in the Gulf of Mexico and ends in the Pacific– and a liquefaction plant –with the intention of exporting gas to Asia– are included, likely promoting higher extraction of natural gas. Following up on what we mentioned about NewFortress Energy’s investment in the country in our previous report, the company gave more details last week. These include collaborations with CFE (a regasification terminal in Baja California Sur) and Pemex (exploitation of the Lakach deep-water natural gas field at the Gulf of Mexico). Together, they represent an investment of about US$3.7 billion. 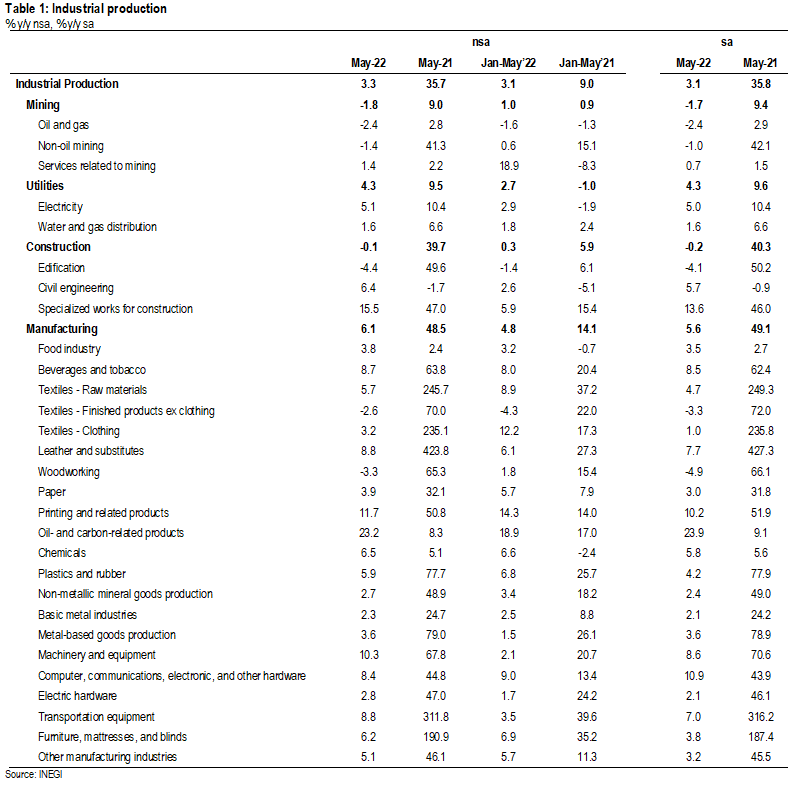 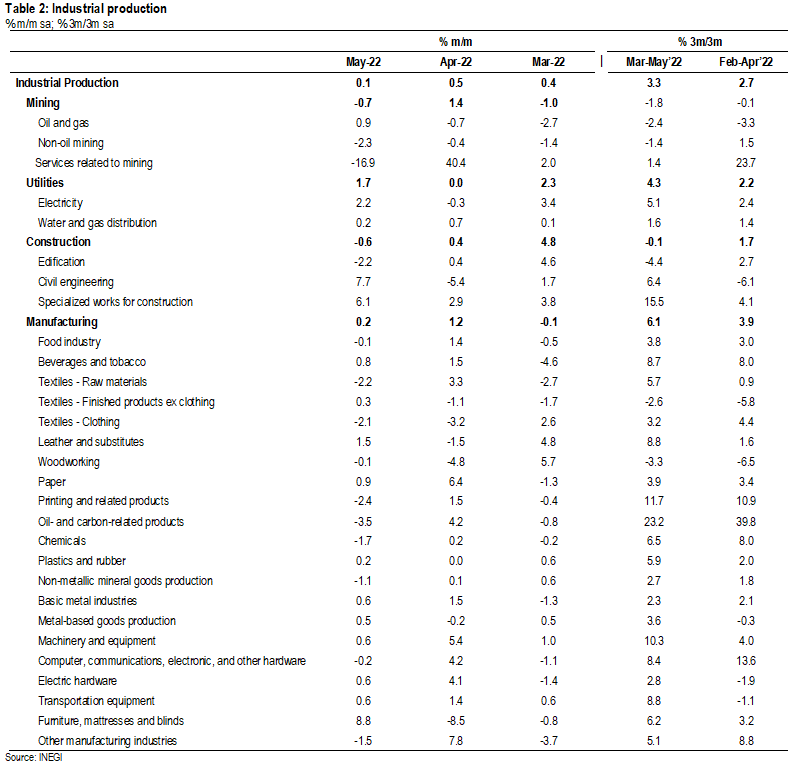