Industry grows at the same pace despite a more favorable base effect. The sector rose 3.9% y/y (see Chart 1), lower than consensus (4.5%) and our estimate (4.9%). Calendar effects were not very sizable, with growth using seasonally adjusted figures at 4.3% y/y. Despite of this, the latter stood above INEGI’s estimate within the Timely Indicator of Economic Activity (4.1%). Back to original data, we highlight manufacturing at +8.4%, with utilities also on the positive side (6.5%). However, both construction and mining were negative at -3.3% and -2.0%, respectively, as seen in Chart 2. For details, see Table 1.

Sequential weakness, with relatively more concerns about manufacturing. Industry contracted 0.2% (Chart 3), extending August’s drop of the same magnitude. With this, the sector is 1.3% lower than the level seen in February 2020 (used as a pre-pandemic metric) and still 5.0% below its historical high seen in September 2015 (Chart 4).

In our view, manufacturing was the most negative surprise, constituting a warning signal going into the fourth quarter. The sector fell 0.3%, extending the previous month drop of the same magnitude. This contrasts with IMEF’s manufacturing PMI –back in expansion territory– and positive signs in the US –also reflected in the trade balance. We do not rule out some lingering issues in inventory management. Looking at the details, 11 out of the 21 categories were down in the monthly comparison (Table 2), with the most relevant adjustments in transportation equipment (-2.9%), oil and carbon (-2.6%), and textiles’ raw materials (-2.3%). The most favorable subsectors were machinery and equipment (4.0%), computers and other hardware (3.0%), and beverages (1.3%), albeit helped by to a relevant extent by favorable base effects. We also highlight a relatively muted rebound in the food industry (0.5%), which seems to remain in a tight spot.

Construction showed the largest expansion at 0.2%, although only after a string of significant declines since April. The expansion was centered in civil engineering (+0.9%), in our view benefiting from the continuation of Federal Government projects, but also with some signs of a boost from state and municipal works. Edification remains dampened (-0.3%), with residential likely offsetting some dynamism in works related to industrial parks and commercial construction. Finally, ‘related services’ rebounded 1.4%, helped by base effects.

Mining declined 1.2%, significantly weak after being flat in August. Weakness centered in oil, down 1.2%, consistent with lower oil output reported by the CNH. Meanwhile, the non-oil component came in at 0.8%. Finally, ‘related services’ extended its decline at -3.4%, still very volatile but stringing three months to the downside. Finally, utilities fell 0.6% (previous: -0.9%).

Global headwinds consolidate, likely pushing the sector into contraction in 4Q22. Despite the downward surprise, today’s results are still consistent with a recovery in the third quarter. In particular, the print –and the revisions to the previous two months– totaled a 3.5% y/y expansion, slightly below the 3.8% seen within the 3Q22 preliminary GDP. However, it suggests that the outlook is turning more adverse, with risks from abroad gathering strength and domestic conditions for some sectors still challenging. As such, our 0.0% q/q forecast for GDP in the last quarter of 2022 does incorporate a modest sequential decline in industry.

On the external front, manufacturing showed some signs of an additional slowdown in the US, at least according to October’s PMI from S&P Global. This indicator fell to 50.4pts, its lowest level since June 2020. However, employment in the sector kept climbing, with 32 thousand new jobs in the month. As such, the narrative seems to be one of more subdued growth. In a context of additional monetary tightening, this could turn more adverse soon. The latter is happening in a context in which broad trade conditions seem to be improving, albeit still with disruptions persisting in key sectors. In this sense, COVID-19 cases in China have remained to the upside –recently reaching a 7-month high– and with lockdowns in tech hubs such as Zhengzhou. Its economic impact may be more modest as authorities are easing restrictions cautiously. Domestically, IMEF’s manufacturing PMI also moderated, decreasing to 50.1pts –impacted by a decline in ‘new orders’ and ‘inventories’. In addition, technical stoppages in the auto sector continued, with closures in VW, Nissan, and GM plants. Consistent with the latter, auto production declined 7.7% m/m (on top of a 7.1% contraction in September). However, other sectors seem to be faring better, anticipating a slight boost on electronics and appliances ahead of the holiday season (which may well have been seen as soon as in September).

On construction, prices continue to be a large hiccup. According to several regional representatives from the Mexican Construction Chamber (CMIC in Spanish), residential works have been highly impacted by cost pressures, especially in low-income housing. While commodities prices have decreased –already reflected in the sector’s PPI at 11.4% in October from a high of 16.7% in May–, this factor will likely continue affecting at least through 1H23.

In the non-residential sector, nearshoring efforts seem to be driving further interest in industrial parks and other projects. As such, reports abound across states such as Jalisco, Baja California, and San Luis Potosí, among others. These types of works could prove key to support activity, not only in the next quarter, but also into 2023, as part of long-term investment programs from foreign companies. On infrastructure, news are somewhat mixed. We highlight that progress on the Interoceanic Corridor of the Tehuantepec Isthmus is lagging, particularly in Veracruz according to Luis Escamilla (head of the CMIC in the southern part of the state).

On mining, we believe the situation in the non-oil sector could become more challenging as prices moderate, with companies having less incentives to increase producing further. Regarding oil, Pemex has kept pursuing some key projects, noting the recent approval by the CNH to develop the Lakach field in deep waters, with an estimate of 937 billion cubic feet in gas reserves. Considering this, as well as the performance so far in the year, we believe new efforts will maintain production relatively stable, albeit still with additional investment needed to set an upward trend for the sector. 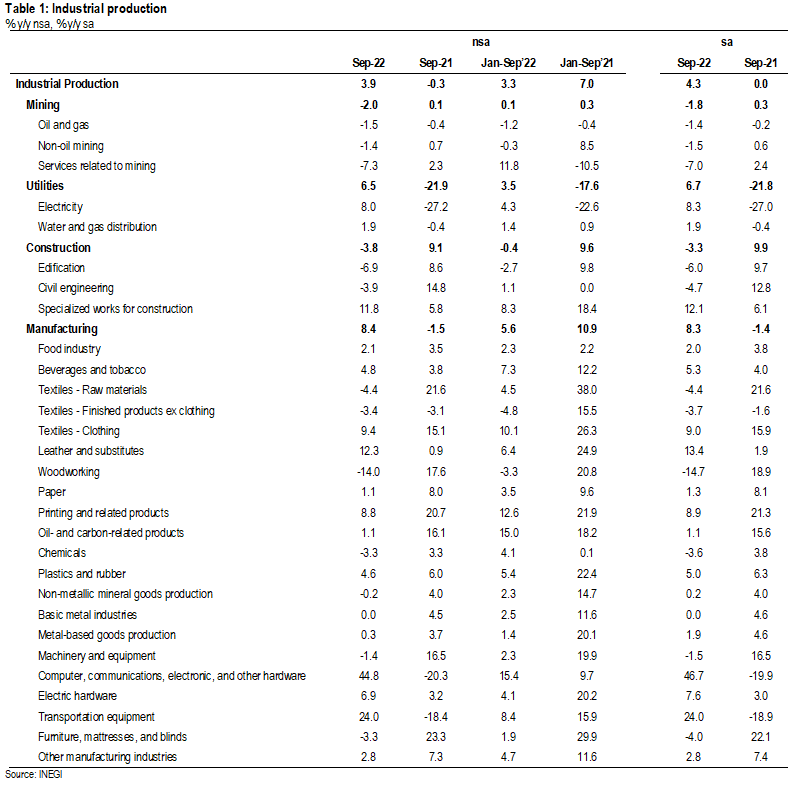 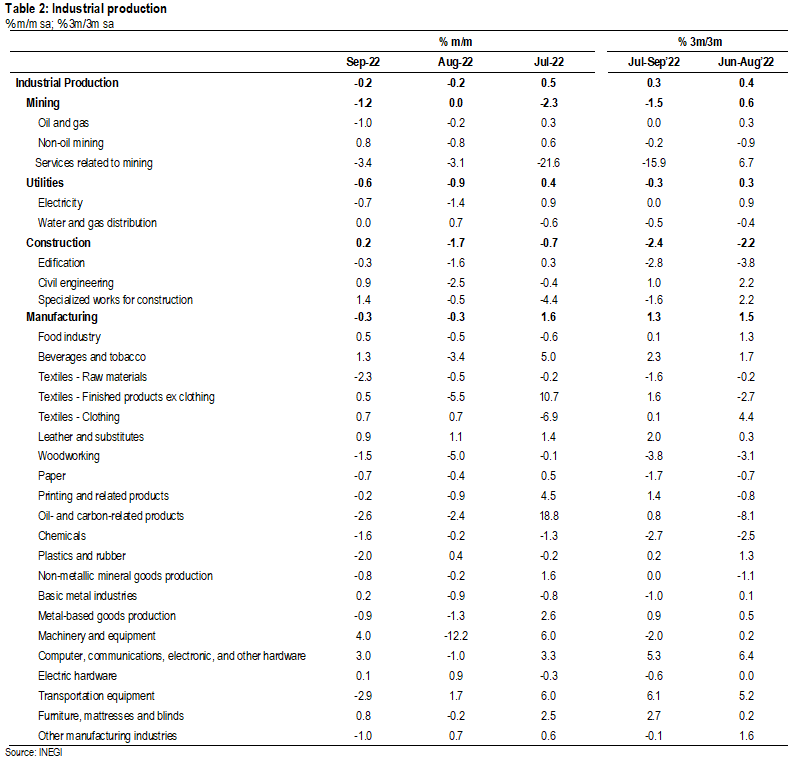