Mexico: Inflation 2021 – Reversal of pandemic distortions amid a weak economy

Inflation to close 2021 at 3.7% y/y. As mentioned recently, we expect inflation at 3.7% y/y by year-end 2021, above the 3.2% seen on December 2020. Broadly speaking, the main drivers behind our revision are: (1) A more persistent effect from ample economic slack, especially during the first half of the year; and (2) our view of a more stable Mexican peso against the USD, resulting in a limited pass-through effect. These are mainly reflected in our call for the core, anticipated at 3.1%. On the contrary, we see some pressures at the non-core, now expected at 5.4% (previous: 4.2%), mainly in energy as international reference prices climb on the back of the recovery. We believe overall dynamics will be favorable, especially relative to the central bank’s forecasts for the 1st half of the year. This is relevant as there is an important negative base effect in April which will drive inflation temporarily above the upper bound of the target range, at 4%. Moreover, this supports our call that Banxico will resume its easing cycle very soon.

Core prices subdued throughout the year. Starting from a relatively high level of 3.8% y/y at the end of 2020, we expect overall pressures to be modest, resulting in a final print in 2021 of 3.1% for this component. We expect distortions induced by the pandemic to prevail during the first half of the year, inserting a downward bias to key categories within services, such as those related to tourism and entertainment, which are more dependent on social interactions. We also do not anticipate large shocks in goods, benefitted by: (1) A more stable exchange rate (see chart below, left), with structural downward pressures for the USD worldwide; and (2) supply chain adjustments and operating procedures already in place that help prevent shocks as those observed last year. In this sense, we believe authorities will prevent nationwide lockdowns again despite worrying trends in COVID-19 cases, given their economic costs. Further ahead, and as the vaccination process moves forward (see table below, right), we could start to see an upward adjustment in some of these categories, mainly on higher demand due to accumulated pandemic fatigue coupled with possible supply constraints –given the bankruptcy of some companies–. We believe this could start to be more evident at the end of 3Q21 and throughout the last quarter of the year. For example, one component that could be relatively pressured by then would be education, as students return to school facilities. In contrast, one category that we expect to remain mostly contained is housing, strongly impacted by ample slack in the economy.

Non-core prices higher on energy and a challenging base effect. Contrary to the core component, the non-core index would trend higher, standing at 5.4% y/y by YE21 from 1.2% in December. We recall that oil and other commodity prices started to fall precipitously after the initial shock from the pandemic in March, with the worst moment by the end of April and still not recovering fully towards the levels seen at the start of last year. This would result in a very challenging base effect for almost all 2021, mainly in energy. Apart from this effect, the main factor driving the increase would be gasolines, with both low- and high-grade rising around 7%, according to our models. It should be noted that the impact from the annual upward adjustment in excise taxes (see chart below, left) would represent an increase of only about 0.9% in retail prices. Therefore, the main boost would be from an adjustment higher in prices due to the global economic recovery (chart below, center), more than outweighing for the relative strength of the exchange rate. A similar situation might happen in gas, albeit more modestly factoring in its accumulated increase throughout 2020, along other commodities.

We expect agricultural goods to remain very volatile, albeit with an upward trend in fresh fruits and vegetables, affected by challenging weather conditions related to climate change and other phenomena, such as “La Niña”. Meanwhile, meat and egg would be more stable. We also expect a more sizable upward adjustments in government tariffs after the mid-term election, which will be held on June 6th. In this respect, we should mention these dynamics were observed at least in the last two mid-term elections, in 2009 and 2015, as shown in the chart below on the right.

Modest impact from the minimum wage increase… As we stated at the time, we expect the 15% minimum wage increase to have a rather limited effect on inflation. As in previous years, we believe that a key factor that will limit the impact will be the two-stage adjustment, with the Independent Recovery Amount (MIR in Spanish) –which accounted for 57% of the total increase– only applying for those who earn just one minimum wage. As a result, the remaining rise is the one that effectively spreads through the labor market. Moreover, it is our take that the cyclical position of the economy, characterized by a very negative output gap and still ample degree of slack in the labor market, should dampen the pass-through effect to prices from operating cost pressures to companies. In this respect, we note the labor force participation and unemployment rates (see charts below, left and center) are still far off their levels before the pandemic hit. This is mainly because there is still a very high number of people not in the labor force (NLF) but available for work, as they do not see opportunities to find a job. For example, they averaged around 15% of the NLF in 2019, currently stand at 22.1% and reached almost 40% in April 2020, when lockdowns were most severe (chart below, right). We think this will also dampen the so-called ‘lighthouse effect’ as employees have relatively low bargaining power relative to employers, thus resulting in a moderate rise in overall salaries. In addition, the fact that the final increase was more modest than in the previous two years should also help dampen its final impact.

…and from tax cuts at the Southern border. As part of a stimulus plan, the Federal Government announced late last year tax cuts for municipalities in the Southern border. This echoes actions taken in 2019, when a similar program was unveiled for the Northern border. In that occasion, 43 municipalities in 6 states (Baja California, Sonora, Chihuahua, Coahuila, Nuevo León and Tamaulipas) were benefitted, from which 5 were also in the CPI sample. Among them, we highlight key border cities such as Tijuana and Ciudad Juárez. In a research note (available only in Spanish), Banxico estimated that the impact from VAT deductions to countrywide annual inflation in 2019 was -11bps, which is quite moderate. This time around, only 23 counties in 4 states (Chiapas, Tabasco, Campeche and Quintana Roo) will be part of the program, with the same magnitude of VAT rate reduction, from 16% to 8%. Of these, only two municipalities are also included in the CPI: Tapachula in Chiapas and Chetumal in Quintana Roo. Specific weights for these cities are not publicly available, albeit we do have them for their corresponding states. Given previous estimates of the final impact on prices and significantly lower beneficiaries this year as a share of the country’s total population, we estimate that the effect on Mexico’s inflation in 2021 will be negligible.

Relevant base effects along the year. Given sharp distortions in 2020 due to the pandemic, we expect annual inflation to show a sort of roller-coaster ride throughout the year. Broadly speaking, some of these distortions included: (1) Pressures in core goods, particularly processed foods, affected by supply chain disruptions and higher demand; (2) the absence of some recurrent seasonal effects, such as those in airfares and tourism services ahead of holiday periods; and (3) the lack of precise information about the evolution of prices in some components due to the suspension of operations by some businesses. Some of these may persist (particularly in the first half of the year), with its most immediate impact in annual rate dynamics centered on base effects. In this respect, we expect an additional decline most of 1Q21, starting with an upward trend in March. After this, the peak would be reached in April, standing at 4.4% y/y. However, we expect a relatively fast decline, returning to the target range in May and continuing its fall towards the low in the year in August, at 2.8%. Finally, as the base effect becomes increasingly challenging, we expect inflation to climb towards our 3.7% forecast in December.

We anticipate more favorable dynamics relative to central bank’s estimates. Throughout most of the year, our inflation forecasts show a shallower path when compared to Banxico’s estimates. This is more evident during the first half, with the central bank expecting much higher inflation, mainly in 2Q21 (see table below). As a result, we believe the room for easing has not been exhausted, especially considering recent concerns about the inflation outlook. Nevertheless, we warn that uncertainty regarding the evolution of prices is still elevated as the pandemic and the challenges that it has imposed on inflation dynamics remain in place, signaling the need to maintain a prudent and very data-dependent stance considering the forecast-based inflation targeting regime followed by the central bank. 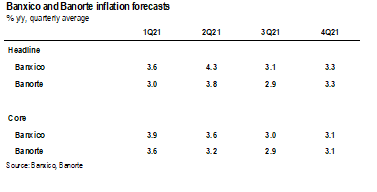 We expect Banxico to resume the easing cycle in their next meeting. We reiterate our forecast that the central bank will cut the reference rate by 25bps on the February 11th decision, the first to be held this year. We also expect two additional reductions of the same magnitude on the following meetings (March 25th and May 13th). With this, the reference rate would reach 3.50%, where we expect it to remain until the end of 2021. As outlined above, our inflation forecasts constitute a key driver behind our call. Nevertheless, we believe there are also other relevant factors backing our forecast, including: (1) Changes to the central bank’s Board, with known hawk, Javier Guzmán, having departed on December 31st, replaced by Galia Borja, which in our view will take on a more dovish stance; (2) risks for economic activity, with the recent uptick in cases and the transition to ‘red’ in the epidemiological traffic light indicator of 5 states (at least until January 17th), including Mexico City and the State of Mexico; (3) a more positive scenario for financial inflows, with renewed risk appetite after the ‘Blue Wave’ in the US and expectations of extended monetary stimulus around the world; and (4) greater awareness over the risks to the central bank’s independence due to the amendments proposed to the law that governs its operations.