Industry below expectations in November. The indicator reached 1.6% y/y (see Chart 1), below our 2.4% forecast, which matched consensus. Using seasonally adjusted figures, growth was barely at 0.7% y/y, with an additional working day boosting original figures. This was below INEGI’s Timely Indicator of Economic Activity, at 1.4%. Back to original figures, mining rose 1.8%, manufacturing was up 2.8%, but construction fell 0.6%. For further details, please refer to Table 1. Industry has rebounded 6.9% year-to-date after dipping 10.4% in the same period of 2020.

A modest setback in sequential terms, led by construction. Industry declined 0.1% m/m, with activity failing to gain ground decisively in recent months (Chart 3). Supply disruptions remain a binding restriction for growth. In our view, the resulting accumulation of price pressures throughout the year are likely impacting demand more significantly, even as COVID-19 cases trended lower during the period. With this, activity was 3.5% lower than in February 2020, which we use as a pre-pandemic benchmark, on top of being 7.4% lower than the historical high in September 2015 (Chart 4).

We flag the 0.6% fall in construction, adding three consecutive months in contraction. Weakness remains centered in edification (-0.2%), with, with civil engineering up 0.3% and related services down 3.2%. This is consistent with reports of greater headwinds due to significant cost pressures, a situation that is likely affecting the expected profitability of several projects. Moreover, manufacturing was flat, with 10 out of 21 subsectors lower, as seen in Table 2. Sectors such as computers, communications and other electronic equipment             (-1.3%), as well as electric appliances (-1.7%) were among the weakest. The latter, coupled with transportation equipment (+0.4%), suggests that semiconductors issues keep affecting performance. In turn. Moreover, food  (-0.2%) and beverages (-0.4%) have been quite limited, especially the former. In turn, we think this likely reflects the impact from higher prices, as flagged by processed foods within inflation’s core component. On the contrary, mining surprised higher (0.4%), with all three subsectors stronger at the margin.

Industry remains challenged, with global restrictions because of Omicron increasing. Today’s result was a bit disappointing, especially as advanced data suggested some renewed dynamism during the period. This adds some skepticism to the view that better epidemiological conditions –both locally and abroad– resulted in better dynamics through December. In this respect, the report points to an outlook that remains complex, with problems still plaguing several sectors. On top of supply-chain issues, raw material’s prices have maintained an upward trend. Moreover, the main overall challenge remains COVID-19, especially as the ‘Omicron’ variant spreads rapidly across the globe. So far, data suggests infected people develop mild symptoms. However, they still need to quarantine themselves and some countries have imposed restrictions again –especially in Asia–, with temporary productivity losses and renewed logistics issues likely taking a toll on the recovery.

Focusing on short-term dynamics for manufacturing, IMEF’s PMI for December rebounded by 1.8pts to 52.6pts. Nevertheless, details were not entirely positive, as both ‘new orders’ and ‘production’ fell. Markit’s PMI was unchanged at 49.4pts, with the report quoting additional problems in logistics and deliveries of supplies, while input prices rose sharply. Positively, auto production stood at 212.3 thousand units, which using seasonally adjusted figures translates into a 10.0% m/m expansion, adding three months higher. In the US, both the indicators from Markit and ISM declined slightly, albeit firmly in expansion. On other relevant data, Bloomberg reports that data from Susquehanna Financial Group points to an additional lag in semiconductor wait times after improving in November, now at 25.8 weeks. This continues to suggest a long path ahead for a sustainable recovery and normalization in this sector.

In construction, timely data from business confidence and the aggregate trend indicator showed broad improvements. However, and as evidenced today, these are not especially accurate for forecasting short-term trends. According to the head of the Mexican Construction Chamber (CMIC in Spanish), Francisco Solares, sharp cost increases are affecting prices of new projects and limiting total output from public budgets. He also stated that early signals suggest these will continue in 2022 and could be exacerbated by shortages of some key materials, such as steel. In this backdrop we are also waiting for the announcement of a third public-private infrastructure package, which according to President López Obrador, should be disclosed this month. Regarding the latter, Solares also mentioned that progress of the two previously announced packages stands only around 30%, with delays as some of these did not have all their permits in order. As such, while signals from public spending are positive, the sector remains in a very tight position.

Lastly, on mining, the Federal Government’s capital contribution of US$3.5 billion and debt refinancing of Pemex finalized this week. This should help free resources for additional E&P, as well as help improve operating performance. However, we believe the state-owned company remains in a difficult situation, with a plethora of challenges ahead for production to return to levels seen in previous years. Finally, and positive at the margin, metal prices have extended higher, which could maintain dynamism within the non-oil sector. 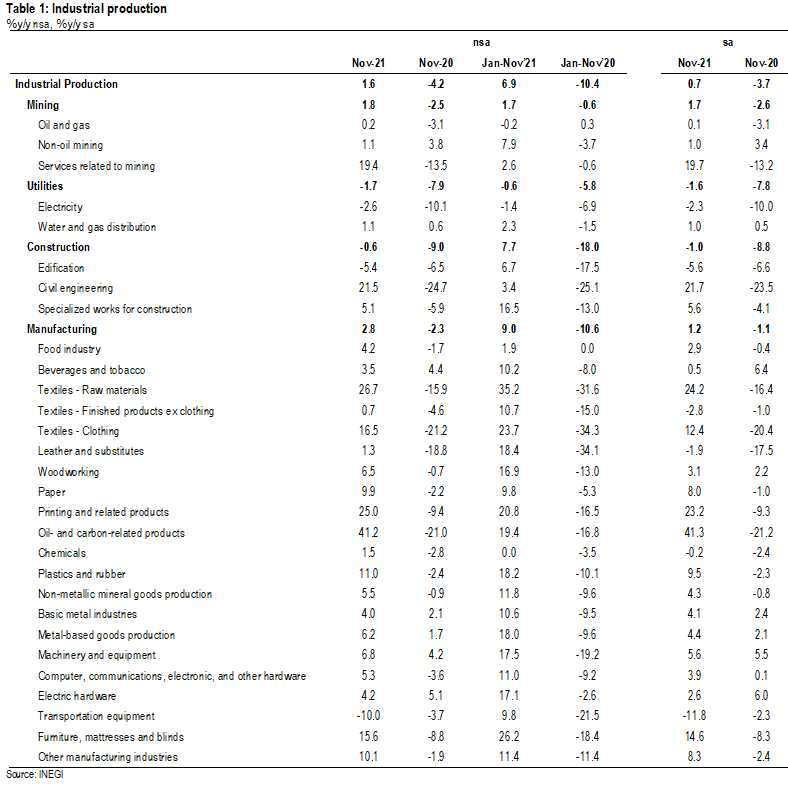 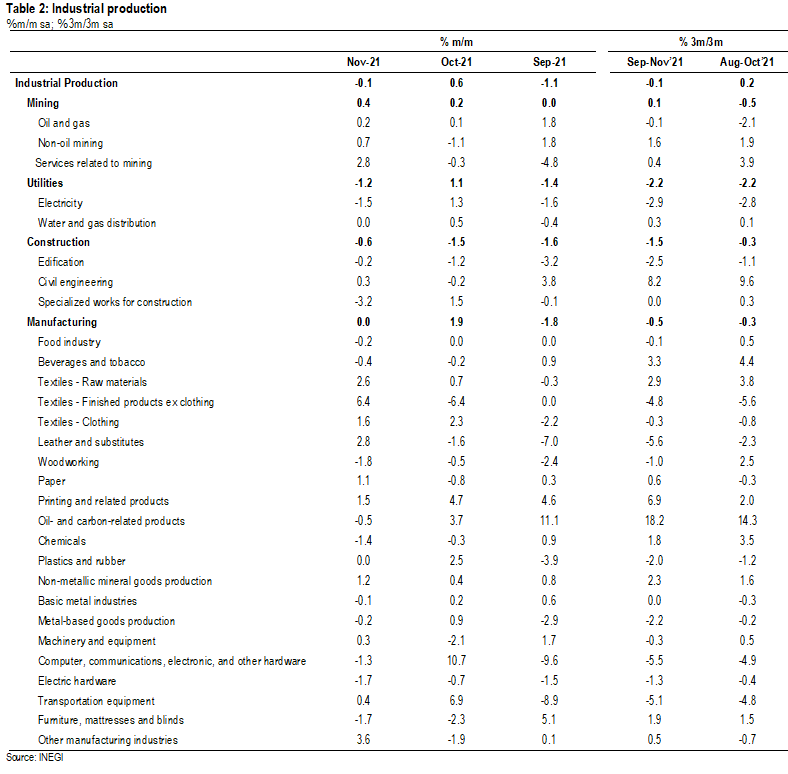