Mexico: IGAE – A sequential decline on weaker services in February

Economic activity fell 5.1% y/y in February. This was lower than both consensus at -4.1% and our -4.3%. Details are presented in Chart 1. There was a negative calendar effect in the month, with the leap year in 2020 subtracting a day in the annual comparison. Correcting for this (using seasonally adjusted figures) activity fell 4.0%, practically in line with the mid-point within INEGI’s Timely Indicator of Economic Activity. The print surprised to the downside, as we saw a more relevant impact from cold weather (which we thought would affect industry more) and a still complex environment for the virus in the first half of the period. It also contrasts with other timely data which seemingly pointed to a better performance. By sectors –and back to original data–, industry declined 4.5%, with construction closing the gap left in previous months while manufacturing was affected by temporary factors. Services declined 5.8% (Chart 2). As has been the case recently, non-essential sectors such as lodging (-43.5%), recreational (-18.2%) and transportation (-13.6%) remain weak, still consistent with social-distancing measures being followed. However, we also note the 6.0% decline in retail, which we expected to show a more vigorous performance after the reopening in the second half of the period. On essential sectors, education and healthcare were stronger (1.1%), while government services were hit at -5.3%, which is somewhat surprising as it had outperformed in the last few months (Table 1). Lastly, primary activities stood at 5.9%, consistent with signals of falling prices. Considering these figures, total activity accumulates a 5.3% y/y contraction so far in the year.

Monthly figures point to a strong impact on services. The economy declined 0.3% m/m, with revised figures for January also in contraction at -0.1% (Table 2). This signals that the effects from lockdown measures were larger than we expected, which on the flipside had a positive effect in bringing cases down sharply. However, we expected the reopening in the second half to have had a more positive impact. In this context, activity levels remain close to those seen in late 2015 - early 2016 (Chart 4).

Industrial production rose 0.4% (Chart 3), which at the time we catalogued as an upward surprise. Inside, utilities (-1.9%) and manufacturing (-1.2%) were strongly impacted by the blackouts and the lack of natural gas. Meanwhile, construction (1.7%) and mining (1.2%) were much stronger, somewhat isolated from these effects.

Within services, only four out of the nine subsectors were negative. Those with sequential declines include transportation (-5.3%), lodging (-4.2%), retail (-1.3%) and wholesales (-1.0%). We consider that more stringent distancing measures may have played a role in bringing them down. Nevertheless, there are some key details for each. For the first, we think that it is also consistent with the decline in manufacturing, also impacting the shipment of goods. On the second (and also impacting transportation) some tourism indicators fell, albeit we thought it had been more modest. On the third, this contrasts significantly with the 1.6% expansion in the standalone report. However, differences in accounting (total sales vs. added value) may be behind the discrepancy. On a more positive note, we highlight the 3.8% expansion in professional services, adding two strong months, while recreational bounced back slightly at 1.4%.

Weakness at the turn of the year, with a more favorable outlook ahead. With this print, the economy added three consecutive months down, consistent with the deterioration in pandemic conditions globally and locally. If this link is to be believed, we should see more dynamism soon considering the notable improvement through March and most of April. However, February’s figure does represent some downside risks to our forecast of a 0.3% q/q expansion in 1Q21 GDP. As mentioned in our preview, signals for March are much more positive, both for industry and services. In broad terms, this is explained by three main factors: (1) Some boost from the recently approved fiscal stimulus package in the US, flowing into Mexico through higher remittances –given additional one-time payments– and increased external demand; (2) disruptions from blackouts and lack of gas fading out; and (3) improving epidemiological conditions, highlighting no states in ‘red’ in the period and further progress on the vaccine rollout.

In April, most recent figures have shown a slight deterioration in virus conditions despite a mostly favorable performance throughout the month. Specifically, half of the country’s states show mild upward trends. In our view this could be related to the Easter holiday, which drove people out and engage in recreational activities. While this probably had a positive effect on activity, we believe its ramifications in terms of overall contagion have so far been relatively modest, especially given the current global backdrop in which some countries have shown a strong worsening of contagion curves.

Moreover, additional passthrough from higher demand from abroad could have permeated further, resulting in a rebound in key sectors such as manufacturing. However, some risks prevail, including supply-chain disruptions and, more recently, an impact on refining capacity. Specifically, there were explosions in the Minatitlán refinery in Veracruz about two weeks ago, as well as in natural gas pipelines in Coatzacoalcos. Regarding the former, operations are estimated to be offline for at least three months, albeit fortunately with no loss of life

All in all, we will focus on the quarterly GDP report –to be released on Friday at 7:00am ET–, as it will help to paint a more complete picture for activity in the quarter. In this backdrop, we maintain our forecast of a 5.3% y/y expansion in 2021 GDP, still above market expectations and not ruling out some adjustments after these figures are released. 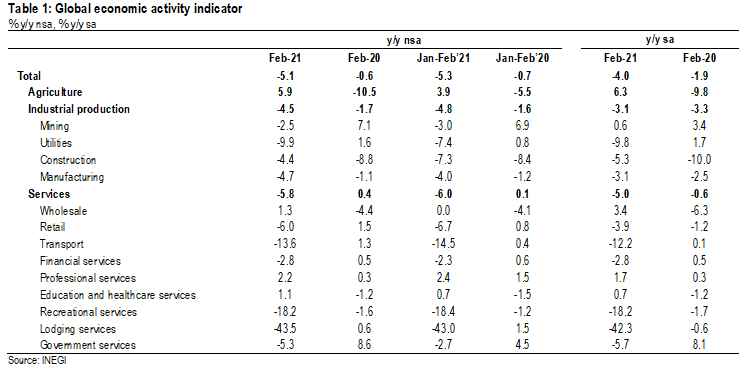