The economy grew 5.7% y/y in August. This was much higher than consensus (3.1%) and our estimate (3.7%). In the annual comparison, there was a positive effect from an additional working day. Therefore, with seasonally adjusted figures, growth was 4.7% y/y, considerably higher than INEGI’s Timely Indicator of Economic Activity at 3.2%. Back to original figures, industry grew 3.9%. On the other hand, services improved substantially, climbing 6.6% (Chart 2). Inside, categories were relatively more stable vs. the previous period, still with significant increases in lodging (23.5%), while professional services and business support moderated on a less challenging base effect to -11.0% (previous: -39.0%). Finally, the primary sector recovered to +4.4%. For further details, see Table 1.

Relevant uptick in sequential terms despite mixed signals. Activity grew 1.0% m/m (Table 2), extending July’s gains (0.5%). This result came as a surprise, as early data suggested a moderation in the pace of growth, especially on additional headwinds from inflation and monetary tightening. As such, we believe some of the key drivers included: (1) Strength in fundamentals –especially employment and remittances; (2) an additional moderation in COVID-19 contagions domestically; and (3) resilience abroad, especially in the US, which could be having a positive spillover effect on both industry and services –mainly related to tourism categories. In addition, performance could have also been benefited by some relief in commodities prices and lower transportation costs. In this context, the local economy now stands 1.1% above its pre-pandemic level (February 2020). However, it is still 0.5% below its historical high in August 2018 (Chart 4).

Industry was unchanged at 0.0% (Chart 3). The only positive component was mining (0.4%), thanks to the oil sector. On the contrary, construction extended its decline (-1.7%) –still impacted by high input prices. Finally, manufacturing took a slight step back (-0.1%), suggesting some resilience in a more complex backdrop. Primary activities rebounded 3.6%, in our view benefited by a relatively modest hurricane season, although still noting adverse effects from drought conditions in some parts of the country, especially in northern states.

Services were quite favorable at +1.2%, positive considering the +0.6% expansion of the previous month. Inside, performance was mostly positive, with seven out of nine components climbing. Among the items with the best performance, we highlight lodging (+5.0%) –consistent with better dynamics in tourism indicators–, professional and business support services (+1.3%) –still very volatile–, and wholesales at +1.3%. To the downside, we highlight education and healthcare at -2.7%, likely impacted by both the decline in cases and the holiday period. In addition, retail sales were also negative at -0.7%, almost matching the contraction in its stand-alone report.

Positive performance so far in 3Q22, although with signs of additional headwinds at the end of the period. While results so far in the third quarter have been quite positive (+3.5% y/y on average), September could take a slight step back, at least according to timely data. As such, we believe GDP in this period could still moderate relative to the growth seen in the first half of the year, but it is almost a certainty that it will be positive in sequential terms. In this context, our attention turns to the trade balance for September (to be released on Thursday), as it will be key to measure dynamism for both industry –with stronger signs out of the US– and consumption –ahead of the holiday season.

Regarding available data, local PMIs (from IMEF) point to mixed conditions in September, with manufacturing better, but services decelerating further. The latter is consistent with a moderation in ANTAD sales, both in nominal and real terms, suggesting that prevailing price pressures could be having a more relevant effect on household spending. However, tourism remains quite favorable. In industry, we are still concerned about the outlook for construction, especially for the residential sector. Nevertheless, there are signs of support for the non-residential branch from government projects and nearshoring interest. Meanwhile, mining could also benefit from a relatively modest hurricane season, pushing yearly figures higher.

Turning towards 4Q22, risks seem to be higher. Early data for US industry suggests an additional slowdown, with S&P Global’s manufacturing PMI falling to 49.9pts, its lowest since June 2020. According to the report, demand is seemingly cooling down despite lower supply disruptions –due to lower commodities and transportation costs, in our view starting to reflect some of the early hikes by the Fed. In addition, other risks from abroad also include: (1) A possible fuel export ban by the US, with President Biden saying that it cannot be ruled out as international fuel prices can still pressure US inflation, in a context of low inventories –especially diesel– and with November’s midterm elections in sight; (2) uncertainty out of China, still affected by the COVID-zero policy and some social disruptions; and (3) the progress of USMCA consultations.

On services, the outlook is also more challenging as inflation will likely continue to be a drag. We are worried about the effect that it could have on leisure spending and other non-essential categories. As such, we remain on watch for possible changes in households’ spending and financing patterns. Despite of the latter, we remain relatively optimistic about the strength in fundamentals, which have been key so far to support the sector. 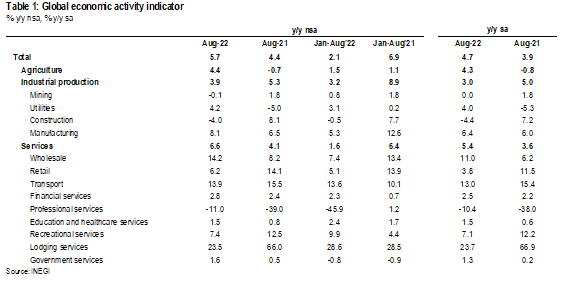