Activity up 2.1% y/y in May, better than consensus. As already known, industry stood at 3.3%, high since last January, but boosted to some extent by one more working day in the annual comparison. Services were relatively more modest, at 1.4% (Chart 2). Distortions due to the pandemic kept fading out in terms of the base effects. Nevertheless, we noted strength in lodging (24.8%) and transportation (13.8%); on the contrary, the steepest declines were in professional and support services (-49.0%) and government (-1.8%). Lastly, the primary sector picked up to 3.7%. For further details, see Table 1. With seasonally adjusted data, growth was 1.3% y/y, lower than the estimate from INEGI’s Timely Indicator of Economic Activity.

A modest sequential decline, with industry and services decelerating. The economy fell 0.2% m/m (Table 2). Although any contraction is unwelcome, we do not see it as highly concerning yet after accounting for accumulated growth of 1.4% in the previous two months. In this respect, it is our take that conditions remained mostly favorable. Among them, we highlight: (1) Additional real wage gains –despite high inflation–; (2) A new historical high in remittances inflows; (3) an extension of the recovery in banking credit, especially in consumption; and (4) stable epidemiological conditions, with the last acceleration in new cases clearer since the beginning of June. On the contrary, employment lost steam, while consumer and business confidence started to moderate. Albeit close, the economy is still below activity levels seen before the pandemic, standing 0.4% lower than in February 2020. On the other hand, it is 2.0% short of its historical high in August 2018 (Chart 4).

Industry decelerated at the margin, up 0.1% (Chart 3). Mining (-0.7%) and construction (-0.6%) weakened, with the result driven by utilities (+1.7%) and, mostly, manufacturing (+0.2%). Primary activities rebounded 2.2%. We believe this was aided by a favorable base effect. Nevertheless, the sector faced a difficult backdrop. Among these challenges, we had the impact from the surge in bird flu cases in the US and northern Mexico, as well as drought conditions that kept worsening at the national level.

Services inched lower (-0.3%) after a relatively strong advance of 1.3% in April. Six out of the nine components rose. Among the top performers were professional and support services a 3.2% –maintaining high volatility and still very weak as portrayed by annual results–, wholesales at 1.0% and financial services at 0.8%. Meanwhile, retail sales fell 2.2%, which although contrasting with the stand-alone report, comes from a highly challenging base of +8.0%. Also negative, recreational services (-8.9%) and transportation (-1.4%) declined, although not enough to make up for their sizable gains in April. In the latter, the increase in gasoline prices –and its impact on companies’ cost structures– likely affected dynamism at the margin. Also related to this, lodging decelerated to +0.3%.

The economy will probably decelerate further. With May in line with our expectations, we are waiting for the 2Q22 preliminary GDP report, which will be released on Friday. Our forecast stands at 0.7% q/q, lower than the 1.0% of the first quarter. However, it is above our previous estimate (+0.5%), although below the one implied in the Timely Indicator of Economic Activity (+0.8%). We do not make changes after today’s report, with our full-year call of +2.1% still very feasible.

The balance of risks for the rest of the year has deteriorated. Externally, July’s PMI manufacturing in the US showed an additional declaration, reaching a new low since July 2020, with weakness in ‘new orders’. Although still in expansion, we are monitoring closely the latest COVID-19 wave as new lockdowns in China could induce additional trade disruptions. This would be quite bad considering that global supply chain pressures lessened for a second month in a row in June (according to the New York Fed’s index) but remain elevated. In our view, investors will be watching closely the resolution of the formal request by the US government to begin consultations on Mexico’s energy sector, and which could be followed by a panel under Chapter 31 of the USMCA framework. Nevertheless, we do not see a sizable impact from this in short-term production. On the contrary, we continue hearing about very strong appetite from foreign companies to establish operations in our country because of the benefits of ‘nearshoring’. In our view, competitiveness in manufacturing will remain as a key structural driver for these industries. However, as the Fed continues restricting monetary policy and the fiscal outlook suggests very low room for stimulus, Mexico’s export sector will probably see lower demand.

Locally, we still think that high inflation is the highest risk for domestic demand and services –which have had a pretty good performance so far in 2022. Specifically, it is our take that households may increasingly cut their spending in the latter, favoring goods instead. This could be more so for food items as price pressures have concentrated in them and demand curves are, generally, more inelastic. Other headwinds include: (1) The acceleration in COVID-19 cases, with the Social Security Institute reestablishing its online tool for workers to ask for temporary leave permits (July 6th) and several municipalities returning to ‘red’ in the ‘traffic-light’ indicator (and even full states, such as Tamaulipas), which could in turn impact mobility and employment; and (2) we do not rule out that remittances moderate due to lower strength in US construction, one of the most important sectors for migrants’ employment, with housing starts and building permits falling sequentially in June.

On the contrary, social program payments of the Federal Government resumed at the beginning of July as the electoral ban was lifted.

Lastly, primary activities are still in a difficult backdrop. We highlight that SEMARNAT declared the ‘state of emergency’ because of “severe, extreme or exceptional” droughts, in place since July 13th. Reports state that the most affected states include Aguascalientes, Baja California, and Sonora. Moreover, it is expected that these difficulties will extend at least until August, a situation that will probably affect the agricultural and livestock sectors. 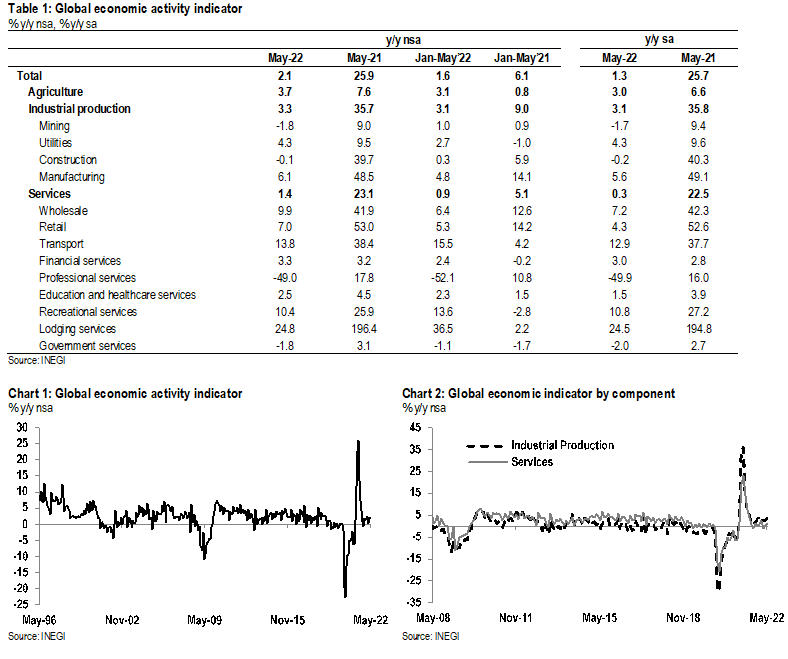