Mexico: Domestic demand–Further progress in investment and consumption in April

Investment extends gains in April. Investment came in at 7.0% y/y (see Chart 1), close to consensus (7.2%), and higher than our 5.0%. Using seasonally adjusted figures it was at 8.4% y/y, with one less working day due to the Easter holiday. By sectors, and back to original data, machinery and equipment rose 11.7% –with imports as the main driver (17.3%)–, while construction increased 3.3% –driven by the non-residential component (3.9%)– (Chart 2). Details can be seen in Table 1.

Sequentially (using seasonally adjusted figures), investment continued to grow, up 1.9% m/m. This is very positive considering the +3.4% of the previous month. Figures so far in the year –except for February– suggest that investment has consolidated its recovery trend (Chart 3). Nevertheless, considering that it came from such a low starting point, even before the pandemic, additional progress is needed. As such, the sector stood 2.8% above February 2020 –used as a pre-pandemic metric–, but 10.6% below its historical high in September 2015 (Chart 4). Inside, both items gained. The best was machinery and equipment, increasing 4.1%. The imported component (+5.3%) once again led dynamism, a situation that has prevailed through the year. Figures were relatively line with capital goods imports in the trade balance (+6.9%), although more modest considering that the latter are measured in nominal terms. Strength centered in transportation (10.4%), but with ‘others’ also positive (4.9%). The domestic component climbed 3.4%, consistent with positive results within industrial production. Both categories were higher, with transportation at +4.8% and ‘others’ at 2.8%.

Construction climbed 0.7%, positive considering the +5.7% in March (Table 2). Similar to machinery and equipment, this is consistent with industrial production, although likely boosted by the acceleration in ‘services related to mining’ which in said report includes the oil rig construction.

Looking at the breakdown, the expansion centered in the residential sector (+1.4%), adding a second month up despite a more challenging backdrop in terms of prices. Meanwhile, non-residential was flat (0.0%), not ruling out lower dynamism after the inauguration of the Felipe Ángeles Airport in the previous month.

Sequentially, consumption increased 0.8% m/m (Chart 7), achieving a ten-month cycle of gains (from July 2021) something not seen since 1994 (from February to November). We believe this is explained by dynamism in its fundamentals. We highlight employment –which, reached a record in April in the total number of employees– and remittances –in a context of a new maximum of Mexican migrants employed in the US. Additionally, we see a couple of positive factors, including a low level of contagious and remnants of extra income in households that receive social programs (due to advanced payments during February-March). However, inflationary pressures likely limited additional growth. Inside, all categories improved, with imported goods (1.5%) leading. Meanwhile domestic services were also strong at +1.4%, with goods more modest at +0.2% (Table 4). With these results, consumption marked a new historical high for a fourth month in a row (Chart 8).

Domestic demand will keep advancing in 2Q22, but at a slower pace. We believe that economic uncertainty during the second quarter will be reflected in domestic demand. Timely data indicates some moderation since May, although the effect could be clearer towards the end of the period. According to INEGI’s Timely Indicator of Economic Activity, services and industry would moderate. Meanwhile, employment fell in May (although not ruling out a one single period fall, especially after June’s IMSS figures). Finally, capital goods imports in May’s trade balance dropped for the first time after eight months of positive rates. With June data, sentiment indicators showed a similar path. IMEF’s indicators closed 2Q22 with a decline for a second month in a row, highlighting manufacturing, which ended in contraction. Likewise, in the US manufacturing ISM fell in the same period. Lastly, consumer confidence in both Mexico and the US deteriorated, likely driven by inflation in both countries.

On a positive note, other data suggests room for domestic activity to continue expanding at a modest pace in 2Q22. Regarding private consumption, remittances remained strong in May  –expecting this to continue in June. In addition, sales from ANTAD affiliated stores, vehicles reported by AMIA and consumer credit, also posted gains. On investment, hey include: (1) Lower commodity prices (e.g. energy and metals –copper, tin, palladium, etc.); (2) relaxation of Chinese lockdowns; and (3) prevailing company interest to operate in our country.

In the second half of the year, the outlook will be challenging. This is due to an extension of some of the risks and the possibility that new ones could materialize. Among the former: (1) Inflationary pressures will continue the rest of the year –with the peak of the cycle in 3Q22 and a 8.1% y/y year-end rate; (2) China's zero-contagion policy could pressure international trade again; and (3) the war in Ukraine and sanctions against Russia could drive up the prices of some commodities, such as energy, fertilizers, and grains. On the latter, concerns have risen about: (1) A US economic slowdown, implying lower employment and consumption; (2) a possible energy crisis in Europe; and (3) a more restrictive monetary policy by Banxico, in line with other central banks.

Despite this scenario, domestic demand would end the year with positive rates. On investment, growth will come from both the public and private sectors. On the latter, companies will keep betting on the reconfiguration of international trade (both due to nearshoring and the weaknesses of current production chains, starkly revealed by the pandemic), where Mexico is strategic place for the assembly and manufacturing of several industries. According to Francisco González Díaz, president of the National Auto Parts Manufacturing Industry, most appetite has been in additive manufacturing and 3D printing, textiles, metal extrusion and fusion, glass, and plastic parts (the latter, traditionally produced in Asia). In this sense, we consider non-residential construction could be boosted in the second half of the year. This would come on the back of greater demand for plants and industrial buildings, as well as the federal government’s project for the ‘Corridor Interoceánico del Istmo’, which started last month. Said project contemplates the construction of 10 industrial parks and the rehabilitation of 309 kilometers of the Istmo de Tehuantepec railroad tracks.

Finally, we maintain our consumption forecast for the rest of the year, believing that it will remain as one of the main drivers of aggregate demand. However, we are watching closely the evolution of fundamentals, especially remittances and the labor market both in the US and Mexico, as well as on the possible impact from higher inflation. 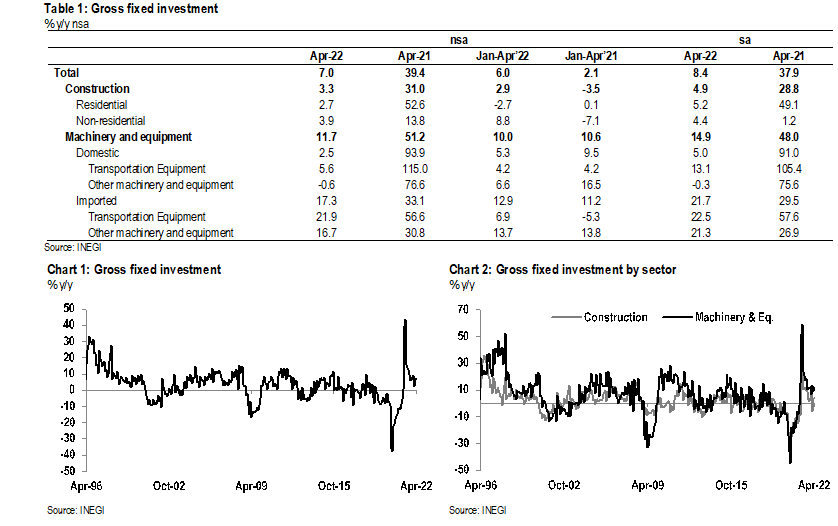 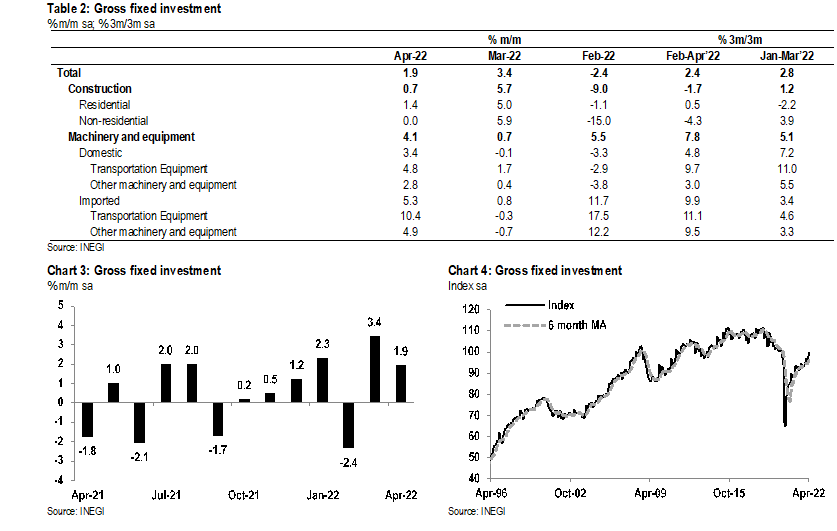 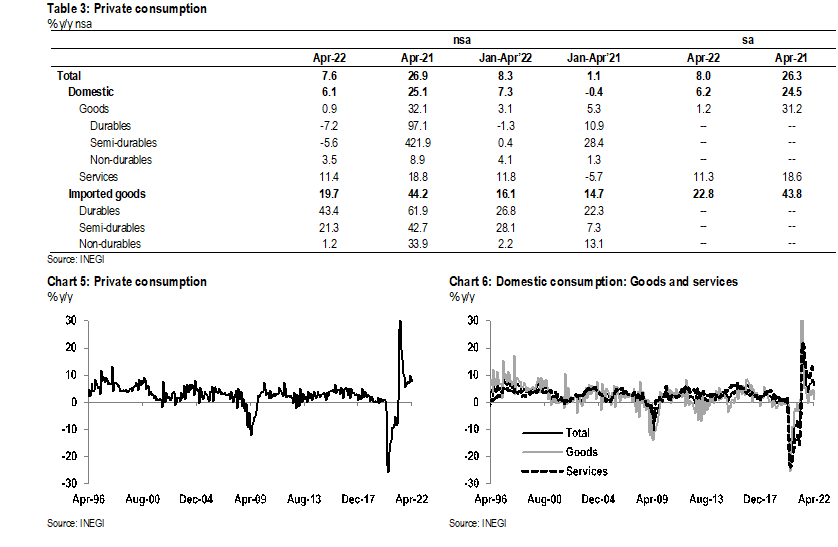 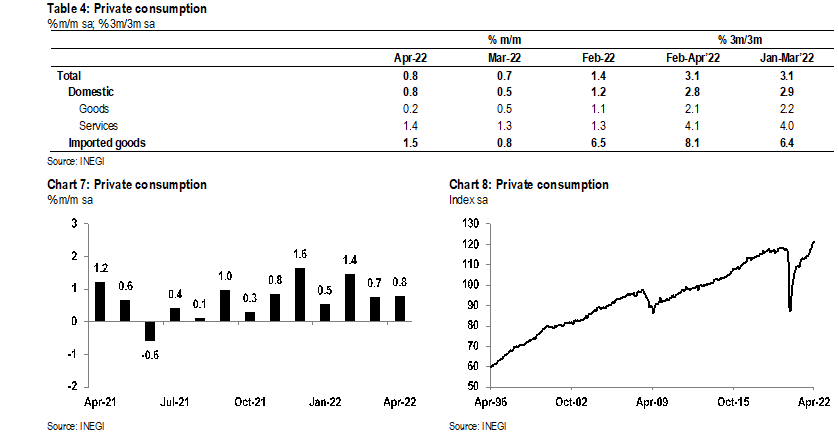