Mexico: Domestic demand–A step back in investment while consumption consolidates

Investment drops, consistent with a more challenging backdrop. At an annual rate, investment grew 3.3% y/y (see Chart 1), below consensus (5.5%) and our estimate (5.3%). We had one working day less, skewing the result downward. Hence, with seasonally adjusted figures it was higher by 4.2% a/a. By sectors, and back to original figures, machinery and equipment had double-digit growth of 14.3%, with the imported component as the best category. Construction continued to fall, down -5.3% (as seen in Chart 2), with both items negative. Further details can be seen in Table 1.

In sequential terms (using seasonally adjusted figures), investment fell 0.9% m/m (Chart 3), not enough to erase August’s +1.8%. With this, the level of activity stands 2.1% above February 2020, used as a pre-pandemic metric. However, it is still 11.5% lower than its historical high in December 2017 (Chart 4). By sectors, machinery and equipment fell 1.4%. This is explained by the domestic component at -5.8%, partially impacted by a challenging base –and with transportation erasing all gains of the previous month, at -7.2%. On the contrary, the imported component kept its upward trend at +0.5%, driven by transportation (+9.8%), as seen in Table 2. Construction declined 0.8%, weak considering null progress in August (0.0%). Inside, residential activity (-2.6%) was the main drag. This is consistent the industrial production report, where edification contracted significantly. Meanwhile, the non-residential sector grew 0.6%, helped by government projects and nearshoring-related activities.

Consumption continues its positive trend. It stood at +6.1% y/y, with a slightly more negative base effect and inflationary pressures continuing (Chart 5). With adjusted figures, growth was 6.0% y/y. Back to original figures, we highlight that imported goods moderated slightly, although still leading at 18.3%, especially due to durable goods (29.5%).

Sequentially, it rose 0.4% m/m (Chart 7), moderating its pace vs the previous month (0.6%). We believe this reflects mixed signals in the period. Specifically, negative results for ANTAD’s same-stores (-0.5% y/y in real terms), as well as prevailing inflationary pressures in the core component. However, fundamentals keep providing support, even with some not-so-positive results. Regarding the labor market the unemployment rate decreased –although with a pause in new job creation. On the other hand, remittances added a fifth month above US$5 billion. Domestic goods grew 0.3%, enough to erase the losses of the previous month (-0.2%). Additionally, services kept advancing by 0.6% (Table 4), likely boosted by the return to in-person classes in the new school year and a drop in COVID-19 contagions. Finally, imported goods grew 1.4% (Chart 8), probably benefited by the strength of the Mexican peso.

We anticipate that consumption will continue as the main driver of domestic demand in 4Q22, with higher risks for investment. Regarding the beginning of 4Q22 and based on timely data for October, we think domestic demand may maintain a favorable performance. Meanwhile, signals from abroad are somewhat mixed, in our view remaining as the biggest risk ahead.

On investment, the scenario is still challenging. Fears of a global recession, the lengthening of the war in Ukraine, and the possibility that the monetary tightening cycle continues in 2023, have begun to dampen demand internationally. In addition, China continued its COVID-zero policy for most of this quarter –with plans to relax some measures until December. Despite of the latter, US domestic demand seems resilient –specifically since October–, also reflected in its manufacturing sector. This rebound has already been seen in IMEF’s PMI manufacturing (November). Therefore, we anticipate that investment may indirectly benefit from this impulse towards the end of the year.

More directly, we remain attentive about the working-groups and upcoming resolutions on the current consultations and controversies within the USMCA framework. According to the Economy Minister, Raquel Buenrostro, progress on energy sector consultations is on the right track and a move through the next stage, which is a panel, may be avoided. Last week, the Minister proposed a new round of negotiations –within this consultation phase–between December and early January to reach an agreement before the North American Leaders’ Summit, on January 9th and 10th. Regarding the auto sector, Alejandro Encinas, the Deputy Secretary of Foreign Trade, said there is already a preliminary decision that could be published in coming days. The resolution could imply a new methodology related to the rules of origin that could benefit productive processes within our country. Along with USMCA consultations, the Mexican and US governments have kept announcing investment alliances that will boost domestic demand as soon as next year. Following up on the High-Level Economic Dialogue (DEAN, for its acronym in Spanish) this year, US Commerce Secretary Gina Raimondo, and her Mexican counterpart Minister Buenrostro, have agreed to strengthen current coordination efforts to accelerate new investments in Mexico.

Likewise, they announced that governments will disclose the economic and fiscal benefits that both countries will offer in the face of nearshoring in the first two months of 2023, thereby taking advantage of appetite from at least 400 US companies –which currently produce in Asia– to move production to Mexico.

Finally, we expect consumption dynamism to extend into 4Q22. We believe there could be some relief due to the moderation in non-core inflation, although there are still concerns about higher prices in food items within the core. Meanwhile, the labor market remain solid with strong job creation in October, as well as an acceleration in wages in annual terms. In addition, remittances will keep contributing to the consolidation of consumption. On the latter, we remain focused on US labor market dynamism, which despite expectations that it will close 2022 strong, we do not rule out a moderation during 2023 ahead of a potential economic slowdown.

All in all, we conclude that consumption will continue as the main driver within domestic demand for the rest of 2022. By 2023, investment could have some elements to resume a bigger role, including higher FDI flows and less uncertainty about USMCA processes. However, we remain cautious in the face of a possible economic deceleration coupled with high interest rates. On consumption, we anticipate a negative spillover from more challenging conditions in the US –with possible effects on local employment and lower remittances. However, the domestic scenario is showing resiliency, which we believe will keep it relatively positive over the next year. 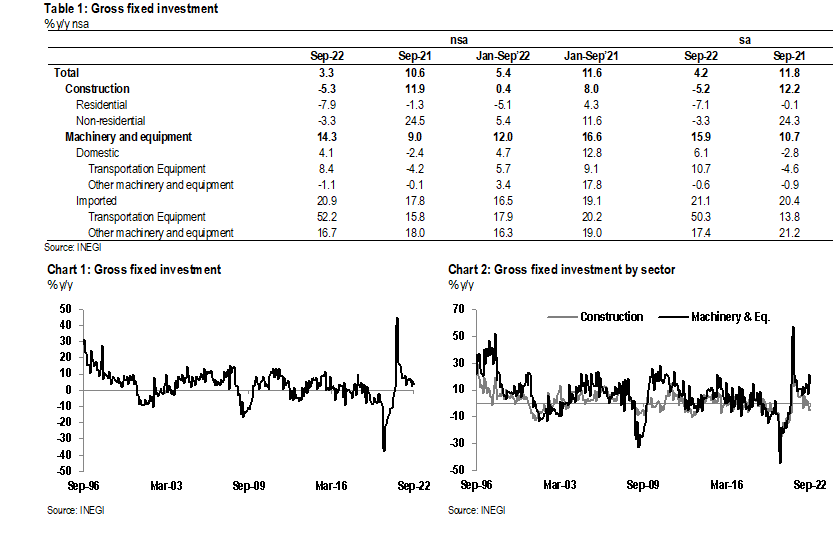 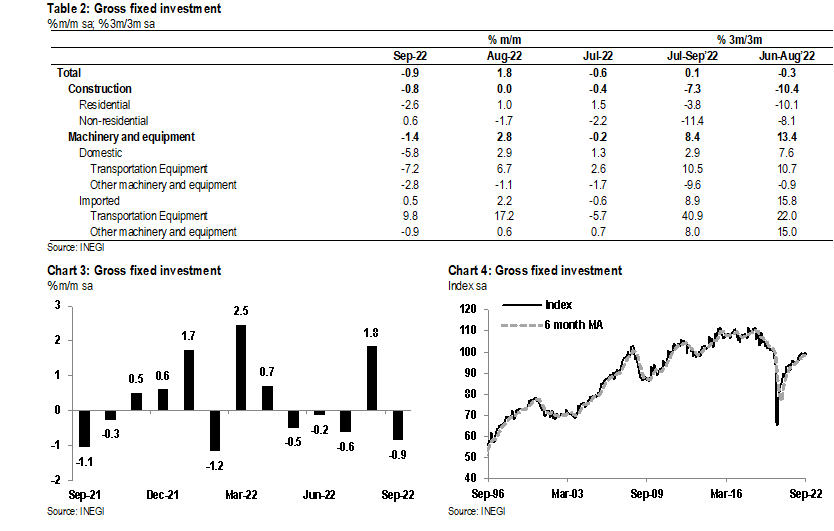 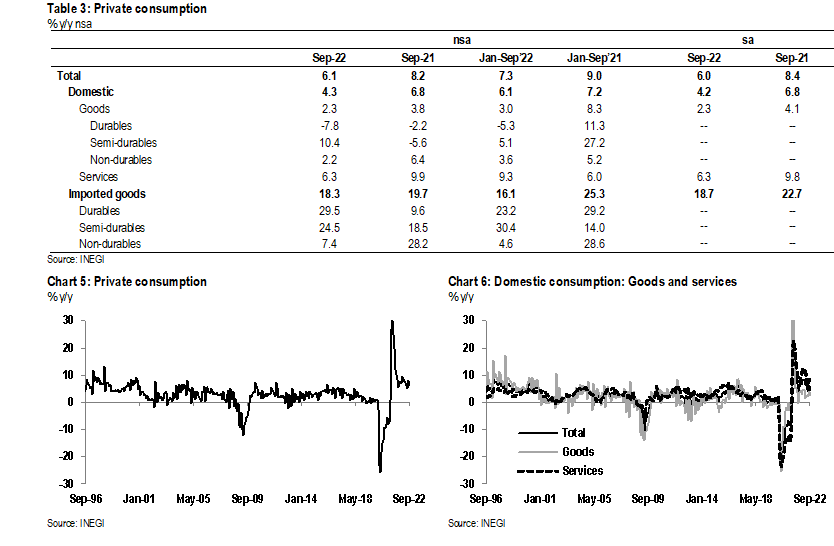 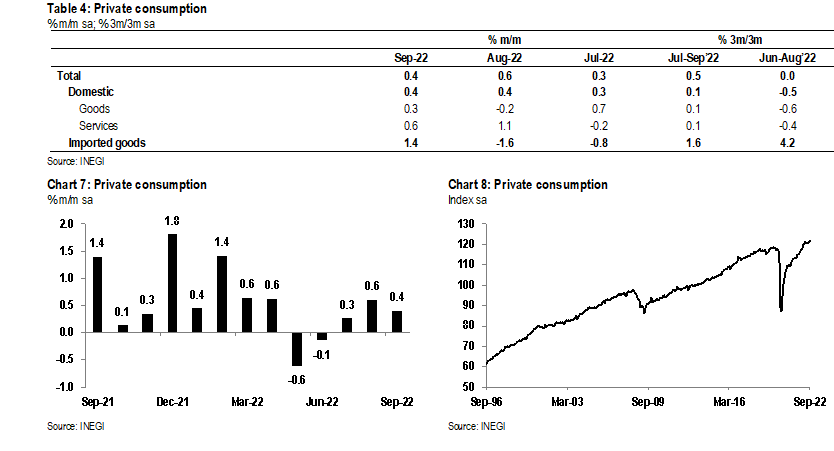