Investment rebounds, with an overall positive performance. Investment grew 7.8% y/y (see Chart 1), higher than consensus (5.7%), and our 6.0%. The figure was affected by one less working day in the annual comparison, therefore with seasonally adjusted figures, growth was higher at 8.5% y/y. By sectors, and back to original data, machinery and equipment kept boosting the sector, although moderating to 13.9% –highlighting, once again, imported goods. Meanwhile, construction returned to positive to +2.4% –with non-residential improving to 10.0%– as depicted in Chart 2. Further details can be seen in Table 1.

In sequential terms (using seasonally adjusted figures), investment rose 0.7% m/m. (Chart 3), erasing some of losses of the previous month (-1.1%). With this, the quarter would increase relative to 1Q22. The level of activity is 2.1% above February 2020, use as pre-pandemic metric. However, it is still 11.3% below its historical high in July 2018 (Chart 4). Inside, construction grew 0.4% (Table 2). The drag continues to be the residential sector (-1.3%) –in our opinion impacted by high prices–, while the non-residential was the key driver at 1.2%, consistent with civil engineering data within the industrial production report. Machinery and equipment increased 1.3%, with imports accelerating (2.3%), while the domestic component was negative (-0.9%). Noteworthy, transportation had a notable contraction in the domestic sector (-4.4%), but stronger in imports (0.7%). However, ‘others’ was better in both components at 4.4% and 2.4%, respectively.

Private consumption up slightly. Growth was 6.6% y/y, continuing a slowdown that began last February (Chart 5), but partly on more challenging base effects. With adjusted figures growth was 6.8% y/y, with a more modest effect from calendar distortions than in GFI. With original figures, imported goods led as they rose 18.4%, also been reflected in the trade balance. Within the domestic category (5.0%), services were stronger (+7.5%), consistent with an easier base due to the pandemic. Meanwhile goods moderated to +5.0%. For further details, see Table 3.

Sequentially, it increased 0.1% m/m (Chart 7). Although positive, it was not enough to offset the losses in May (-0.6%). This may reflect strength in fundamentals, including a modest rebound in employment, sustained growth in remittances, and banking credit expansion. However, we believe the recovery remains limited by inflationary pressures –impacting real wages– and some other factors such as the absence for social programs’ payments (due to the electoral ban), the beginning of the fifth wave of COVID-19, and a drop in consumer confidence, among others. Inside, weakness was mostly in the domestic sector at -0.2%, with a higher deterioration in services (-0.4%) –consistent with rising cases–, but with goods also lower at -0.2%. Imported goods rose by 4.1% (Table 4), still quite positive. With this, consumption resumes its recovery (Chart 8), which we expect to continue, although without ruling out a more modest pace.

Consumption will remain as the driver of domestic demand. We anticipate a slowdown in the growth rate during the third quarter of 2022. Nevertheless, we maintain our forecast that consumption will maintain its recovery trend and will contribute significantly to domestic demand growth. However, some factors may moderate its trend. In the short-term and based on timely data, July’s scenario looks more mixed. Positively, retail sales recovered according to ANTAD sales and despite higher inflation, with same-store sales at 3.3% y/y in real terms from -0.1 % in June. IMEF’s non-manufacturing PMI also improved, which is positive considering that for seven months it has remained in expansion territory. Despite of the latter, on the contrary, AMIA vehicle sales fell for the second consecutive month to 90.0 thousand units (-6.8% m/m). In addition, consumption goods imports (according to the trade balance) fell 3.3%. Lastly, in terms of labor market, the highest number of contagions due to the COVID-19’s fifth wave occurred in July, which implied more IMSS’ temporary leave permits. The impact in terms of employment was much less than in previous waves. With IMSS figures, total permits granted in this wave were 184.3 thousand (previous wave: 364.2 thousand), representing a financial subsidy of $133.7 million and a total of 895.0 thousand days granted on temporary leave.

Regarding investment, the outlook continues to be more challenging, with notable headwinds gathering traction. Among them, we highlight: (1) Inflation –which we forecast may peak in 3Q22 but remain elevated afterwards; (2) Banxico’s tightening cycle, along with a similar monetary policy around the world; and (3) US recession fears. However, in fundamentals, signals continue to be relatively better, which could act as a support. In this sense, we highlight some of the latest plans announced for the country recently. In the private sector, Nestlé announced an investment of $2.5 billion in the Bajío region to modernize and improve its Querétaro plant. Based on local government data, the entity adds $17.9 thousand million with this investment year-to-date on 36 projects. Publicly, the Federal Government created the company LitioMx by decree, to be established in the northwest (Sonora). The company aims to exploit the country’s lithium deposits, allowing private investment for the sector’s development. According to the Economy Ministry, FDI reached US$27.5 billion in 1H22 –with US$11.8 billion in new investments and US$11.7 billion in reinvestments. We anticipate FDI to keep coming amid the ‘nearshoring’ transformation and as the country’s macro stability in the medium- and long-term remains attractive for foreign companies. 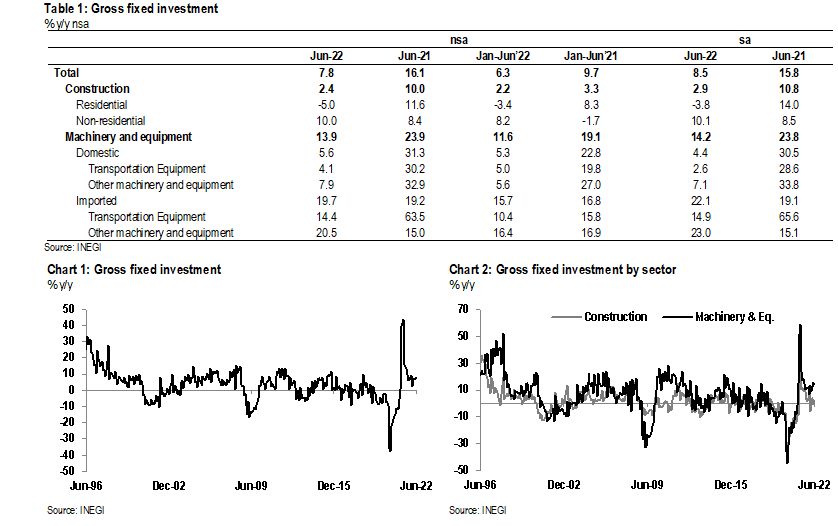 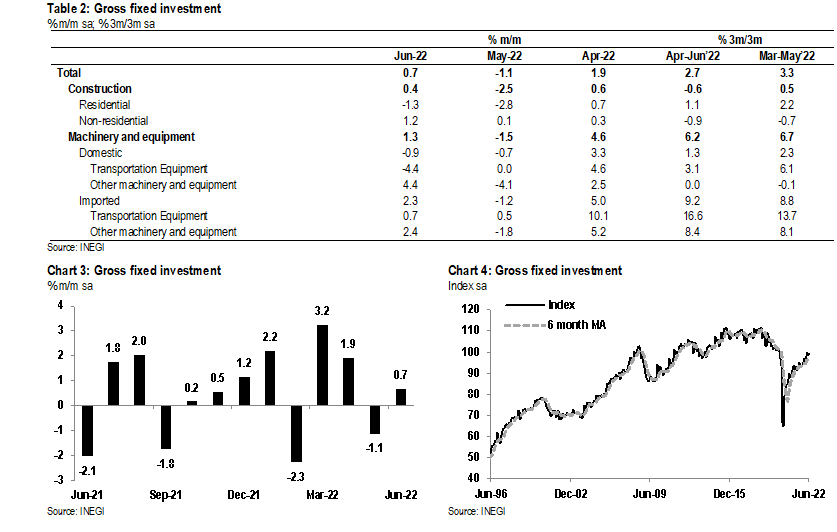 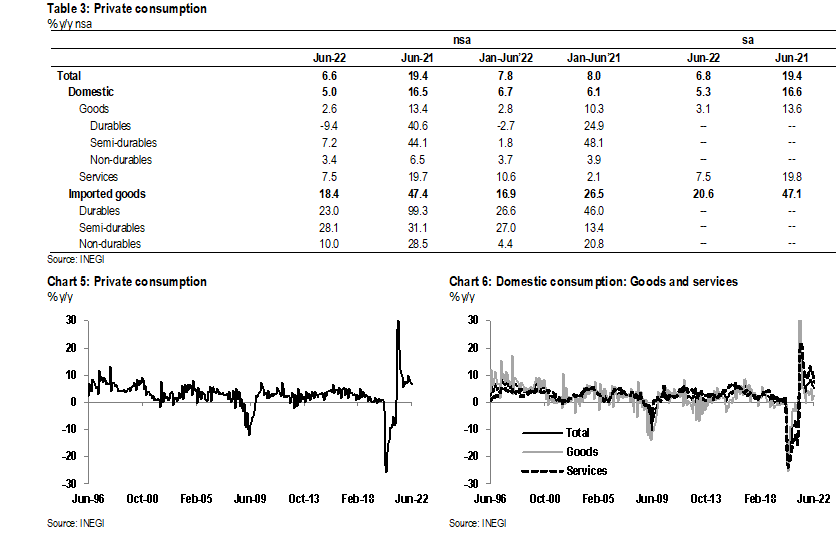 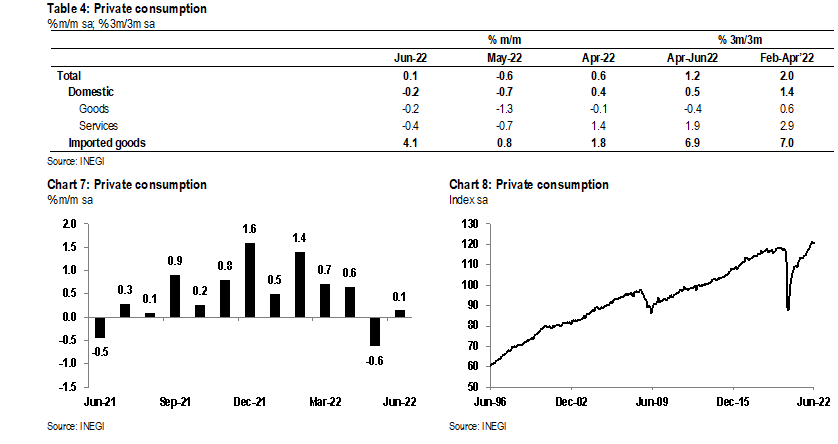