Mexico: Domestic demand – Setbacks in May amid weaker economic conditions

Investment weaker in May. Investment grew 6.2% y/y (see Chart 1), above consensus (6.0%), but lower relative to our 8.1%. This happened despite one more working day in the annual comparison, instead of one less in April because of the Easter holiday. Using seasonally adjusted figures, growth was 5.5% y/y. By sectors, and back to original data, machinery and equipment led the move at 15.4% –with capital goods imports still high, at 22.8%–, while construction moderated to -1.3% –with non-residential (3.5%) more vigorous– as depicted in Chart 2. Further details can be seen in Table 1.

Sequentially (using seasonally adjusted figures), investment contracted 1.2% m/m. This was modest considering the 5.1% accumulated advance of the two previous months. In this respect, we remain relatively optimistic that investment remains in a recovery trend (Chart 3). The level of activity is already 1.3% higher than in February 2020, before the pandemic. Nevertheless, it is still 12.0% below its historical high in July 2018 (Chart 4). Inside, construction fell 2.7% after two months to the upside (Table 2). In turn, this is mainly because of the residential sector (-3.3%), with the non-residential virtually flat at 0.1%. The latter is consistent with some resilience from civil engineering in the industrial production report, which maintained its dynamism. Machinery and equipment also backtracked (-1.0%), with imports dragging the headline (-1.5%) relative to the domestic component (-0.4%). Despite of this, the transportation sector gained some momentum, up 0.2% domestically and 0.3% in the imported sector.

A slight step back in private consumption. Growth was 7.2% y/y, decelerating at the margin, albeit also aided by the difference in working days (Chart 5). Seasonally adjusted, growth was up 6.3% y/y. Using original figures, we highlight that imported goods were up 18.1%, with this dynamism also signaled by imports of these type of goods in the trade balance. Domestically, services (9.3%) remain higher than goods (2.3%). For further details, see Table 3.

More importantly though, sequential performance showed a 0.4% m/m decline (Chart 7), breaking with ten consecutive months of improvements. We believe the result was impacted by the negative employment surprise and high inflation. However, the decline was modest, with other fundamentals limiting this, including remittances, banking credit, and real wage gains. There may also have been some benefit from discounts campaigns that have gained salience, such as the Hot Sale (from May 23rd to 31st) and an additional improvement in mobility  –with the latest wave of COVID-19 more visible until June. Another headwind came from the fact that the latest social programs’ payments of the Federal Government were made in March and restarted until July because of the electoral ban. Inside, weakness centered in domestic goods at -1.1%, with services and imported goods still recovering (Table 4). Despite of the setback, consumption maintains a clear recovery trend (Chart 8), expecting it to continue in coming months.

Consumption likely kept spearheading the recovery. Based on the preliminary GDP for 2Q22, services probably gained further in June (+0.6% m/m), in our view reflecting that consumption rebounded in the period. Although detailed sector data is not yet available, retail sales for the same month could have decelerated as flagged by ANTAD sales, with inflation limiting more robust growth. Moreover, vehicle sales inched lower to 97.6 thousand units (+2.5% y/y), according to AMIA. Nevertheless, other figures paint a rosier picture. These include remittances, banking credit, consumption goods imports, and the rebound in employment. The latter is especially important when considering that COVID-19 cases picked up because of the latest wave, with IMSS rehabilitating its online tool for workers to request temporary leave permits for 5 days in early July. According to the institute, 142,106 temporary leave permits for COVID-19 were given from July 6th to 26th (7,101 daily). For comparison purposes, in the previous Omicron wave, about 373,296 permits were granted from January 10th to February 22nd (8,681 daily). Mobility data indeed shows a decline in ‘workplaces’ in the period, albeit with ‘retail and recreation’ stable. Moreover, it seems consistent with anecdotal evidence that suggests the population has adapted more to living with the pandemic. More timely data for July shows that these trends exacerbated, which could have affected some categories within services, such as lodging and restaurants. Nevertheless, IMEF’s PMI non-manufacturing recovered at the margin, led by ‘production’. Given recent dynamics and these figures, we believe that growth continued, even after accounting for elevated inflation.

On investment, real estate broker CBRE estimates that demand for industrial parks in Mexico City’s Metropolitan Area reached 430,000 square meters in new transactions during 1H22. This is a recovery as it represents 75% of the demand seen in full-year 2021. This is in line with other reports about strong appetite for new space in a plethora of manufacturing industries, in turn boosted partially by ‘nearshoring’ efforts. In our view, this may remain as a positive driver for construction. On the public sector, June’s public finance report showed that capital spending in physical investment by the Federal Government grew 64.1% y/y in real terms and 13.0% in the first half of the year.

In recent days, President López Obrador has stated that new austerity measures are in the works to cut operating and travel expenses for these savings to be directed towards priority programs. These include social transfers (which could help consumption) and the construction of projects such as the Mayan Train and the Dos Bocas refinery. Moreover, he said that both Canada and the US are looking closely at new projects in the energy sector for about US$40 billion. These include gas pipelines, two thermoelectric plants in the Yucatán Peninsula, and gas transportation by land –in a joint venture between CFE and TC Energy–, among others. In this sense, investors are also watching the evolution of USMCA consultations recently requested by both countries on some issues in the energy sector. Overall, we believe that investment looks more fragile ahead, especially as interest rates rise in an environment of heightened fears about a global recession. 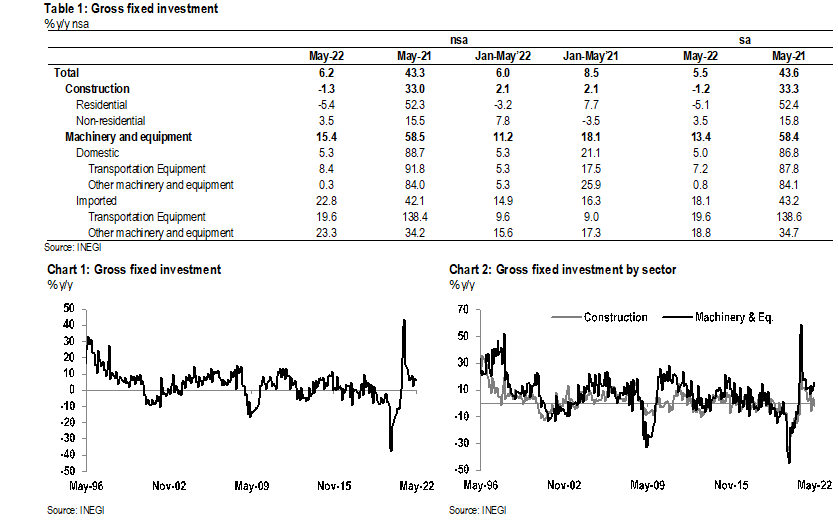 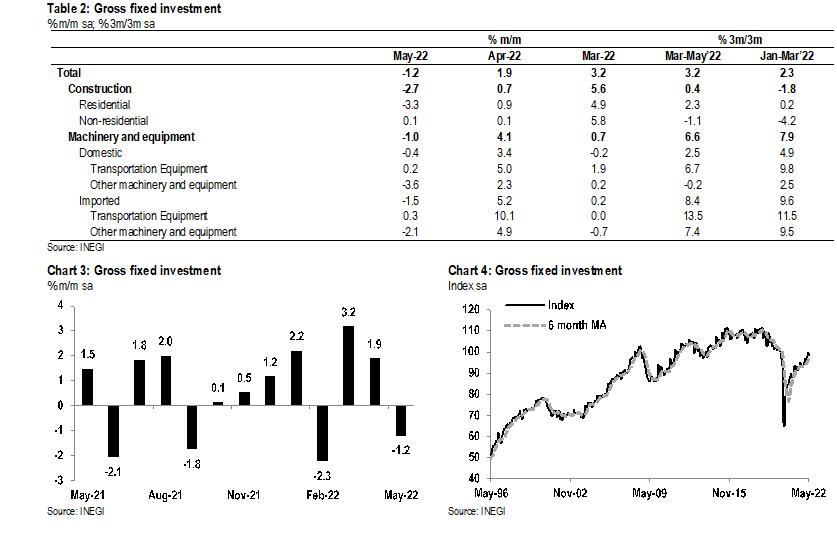 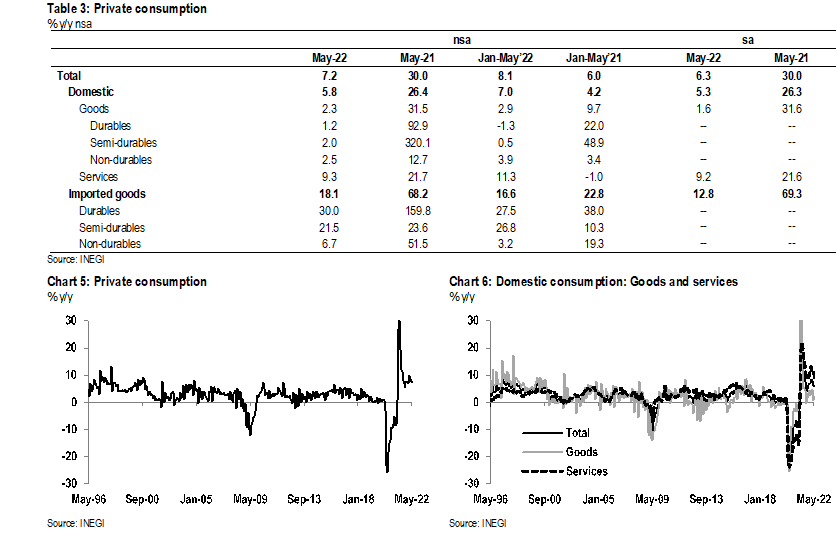 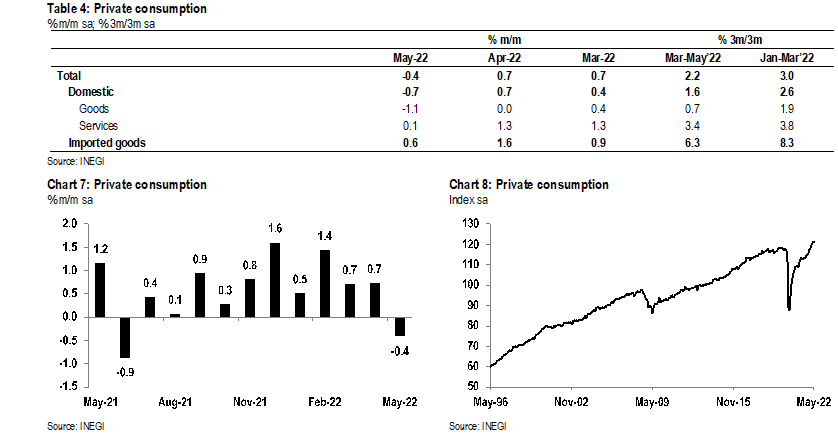