Mexico: Domestic demand – Resilient at the end of 1Q22

Investment rebounds, supported by a base effect. Investment came in at 5.9% y/y (see Chart 1), close to consensus (5.6%), but higher than our 3.3%. Using seasonally adjusted figures, this translates to +4.1% y/y, as figures are skewed higher by the timing of the Easter holiday relative to last year. By sectors, and back to original data, machinery and equipment stood at 8.6% –boosted by the imported component–, with construction at 3.6% –driven by non-residential– (Chart 2). Details can be seen in Table 1.

Sequentially (using seasonally adjusted figures), investment rebounded 2.9% m/m, more than offsetting the 2.3% decline seen in February. However, it is still too soon to confirm if the recovery trend has been reestablished, considering higher volatility in recent months (Chart 3). With this, the sector stood 0.2% higher than in February 2020 –used as a pre-pandemic metric– but 13.0% below its historical high in September 2015 (Chart 4). The increase is explained by a 5.2% expansion in construction, greater than the recovery in the industrial production report. The main driver was the non-residential component at +5.7%, likely related to progress on civil engineering works (such as the Felipe Ángeles International Airport, which was inaugurated in the month) and interest in industrial parks. Also positive, the residential sector climbed 4.7%, favorable considering prevailing price pressures. On the contrary, machinery and equipment fell 1.3% (Table 2), with a negative base effect and dragged by the imported component (-1.6%). This contrasts with the performance of capital goods imports within the trade balance, which rose 6.8%. We attribute most of the difference to price pressures, as the latter figures are reported in nominal terms while investment takes into account only added value. Inside, weakness centered in transportation (-2.9%), but with ‘others’ also lower (-1.2%). Domestically (0.4%), figures were flatter, with ‘others’ (0.5%) slightly outperforming transportation (0.2%).

Consumption maintains a positive trend, supported by fundamentals. In annual terms it stood at 8.8% y/y, marginally lower than the previous figure (Chart 5) as the base effects continue to unwind. Seasonally adjusted, the effect from the Easter holiday is much more modest, with growth at 8.5% y/y. At the sector level, and using original figures, we highlight imported goods at +14.1%, still favored by base effects. Within the domestic component, our opinion is that both goods –with a significant improvement (4.8%)– and services –still quite high (11.3%)– reflected the resilience of fundamentals despite price pressures. For details see Table 3.

Sequentially, consumption grew 0.7% m/m (Chart 7) adding nine months up and accumulating an expansion of 7.0% in said period. While moderating relative to the previous month (+1.4%), we consider that the result is quite favorable, bolstered by some developments in the period. Among them, we highlight: (1) A continuation in the downward trend of COVID-19 cases, contributing to a consolidation in mobility; (2) an additional round of early social-program payments, this time focused on the elderly; and (3) additional progress in fundamentals, mainly employment and credit. However, inflation remained to the upside, with pressures concentrated at the core. Inside, all categories were higher once again, but with domestic services (1.3%) outperforming. Meanwhile, imported goods increased 0.7%, with local goods at +0.5% (Table 4). With these results, consumption is 2.1% above its previous historical high of July 2019             –which was already breached by February’s print– and 2.9% higher than in February 2020 (Chart 8).

Going forward, domestic demand will likely maintain a positive trend, with consumption as the main driver. In the short-term, domestic dynamism will likely continue, although noting some key challenges. Despite additional progress in consumption fundamentals (such as employment, remittances, and loans), we do not rule out a moderation on the distortion due to the early disbursement of social programs payments. This was already reflected in sentiment indicators such as the non-manufacturing PMI from IMEF. On investment, we await construction data from the IP report later this week, seeing a more modest performance given the important uptick this month. On the flipside, capital goods imports accelerated to 7.8% m/m in April, pointing to a rebound in machinery and equipment.

In the medium-term, we expect domestic demand to moderate, especially on investment. Caution mainly stems from the persistence of inflationary pressures on inputs –especially in energy and other commodities–, the increase in the cost of credit and the lengthening of external supply shocks that continue generating disruptions in various production processes (e.g. scarcity of microchips, commodities). However, we do not rule out that it could maintain some dynamism, both from civil engineering works by federal government projects, but also from different projects in the private sector. Appetite remains on nearshoring efforts by foreign companies, looking to take advantage of low labor costs and the proximity to the US. As such, the outlook for investment in maquiladoras is relatively positive. According to Luis Manuel Hernández, president of the National Council of the Maquila and Export Manufacturing Industry, this sector will contribute US$11 billion in fixed assets in 2022, partly supported by the Mexican maquila program that allows imports of inputs free of tariffs and taxes.

On consumption, the overall trend looks better, although also likely moderating slightly. We expect dynamism to remain tied to the general pace of the economic recovery as well as progress on the pandemic. So far, risks remain more tied to the former. On fundamentals, remittances will likely continue growing at a brisk pace, bolstered by progress in the US labor market. However, dynamism could decrease as the Fed continues with its tightening cycle. Locally, consumer loans continue to lead the overall recovery in credit, likely boosted by discounts initiatives (e.g. Hot Sale and others) but also by efforts from institutions to recover after the pandemic slowdown. Lastly, job creation remains favorable, with overall labor market conditions on track to recover its pre-pandemic levels before the end of 2022. On the other hand, –and similar to investment– we believe that inflationary pressures remain as the main curb for consumption both in the short- and medium-term, as increases have centered in food items. Despite the latter, we believe consumption will remain a key driver of aggregate demand for the remainder of the year. 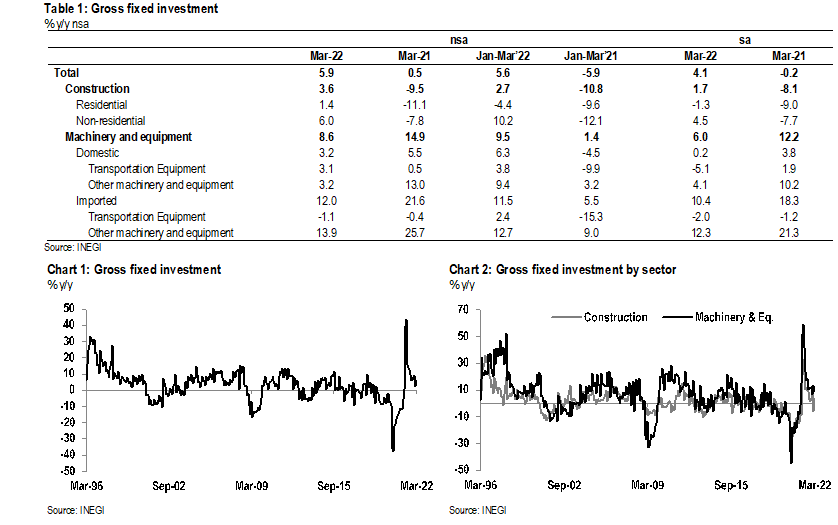 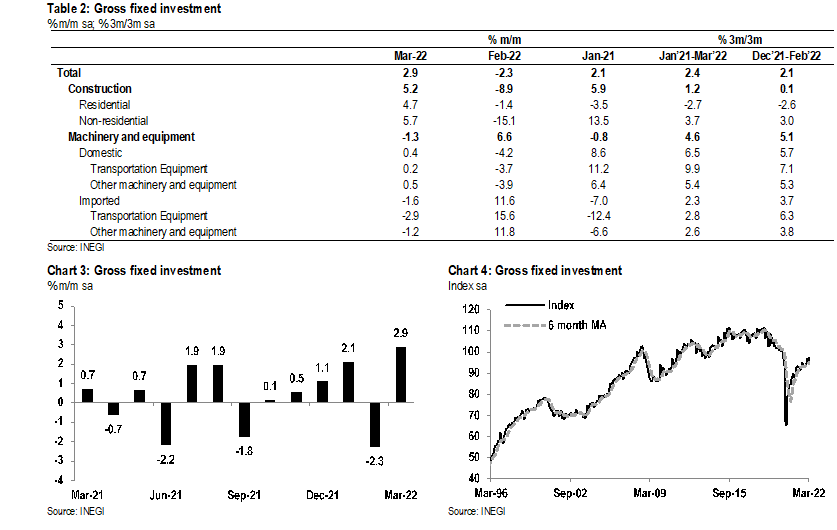 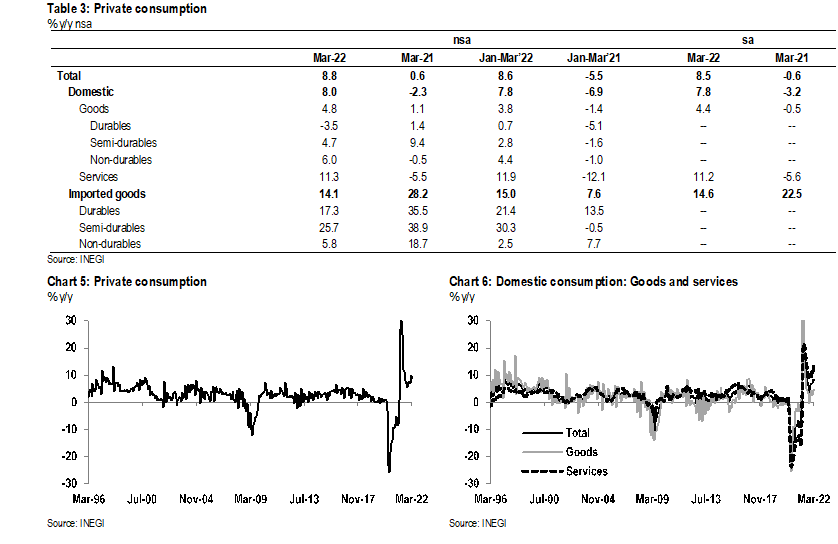 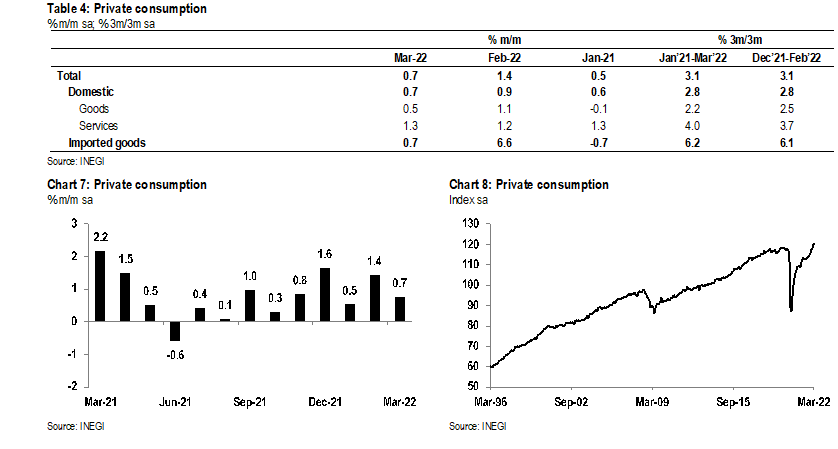