Investment accelerates in January. Investment came in at 8.6% y/y (see Chart 1), better than consensus, which in turn matched our forecast of 4.0%. By sectors, machinery and equipment stood at 6.6%, meanwhile construction reached 10.0% –still with a favorable base effect– (see Chart 2). Details by subsectors can be seen in Table 1.

Sequentially (using seasonally adjusted figures), investment grew 2.2% m/m (Chart 3), achieving its fourth consecutive increase, not having seen such a period since mid-2008. With this, the sector stood 0.7% higher than February 2020’  –used as a pre-pandemic metric– and 13.1% below its historical high on September 2015 (Chart 4). Construction was strong (4.8%) and much more positive than in the industrial production report –with strong movements in the ‘related services’ item in the last couple of months–. Similar to previous periods, strength concentrated in non-residential (14.0%). In our opinion, this was driven by the acceleration in infrastructure projects by the federal government, especially the Felipe Ángeles International Airport –considering its inauguration by the end of March–. Meanwhile, residential came in at -2.7%, still with some weakness likely associated still to hefty cost increases in the sector. Machinery and equipment declined 1.1% (Table 2), dragged by the imported component (-7.1%). This was larger than suggested by capital goods imports within the trade balance, supporting our hypothesis that figures in said report are skewed to the upside by higher prices. The domestic surprised to the upside at +8.0%. This is quite positive considering signs from various subsectors within manufacturing –including transportation– anticipating more of an impact from supply disruptions, higher contagions and work absenteeism.

Consumption consolidates its recovery trend. The figure came in at 6.9% y/y, with a more positive base effect at the margin (Chart 5). Categories that benefited most from this were still imported goods (9.6%) and services (11.4%), while domestic goods were lower (2.4%).

We think activity may have slowed down due to the increase in COVID-19 cases, although still supported by the general recovery trend of recovery. For details see Table 3.

With seasonally adjusted figures, consumption grew 0.3% m/m (Chart 7) adding seven months up an accumulating +4.2% in this period. We believe the slowdown relative to the previous month is explained by several factors, including: (1) A deterioration in epidemiological conditions, with a moderate impact on mobility; (2) lower employment levels; (3) persistent price pressures; and (4) a more challenging base effect. However, stability in other fundamentals (e.g. remittances and credit), as well as less concerns about the virus –due to progress of the vaccination campaign– could have lessened the impact. Inside, services remained positive (+0.8%), with domestic goods down just 0.2%. On the other hand, imported goods fell 1.0% (Table 4), consistent with the deceleration in this category within the trade balance. With these results, consumption is 0.8% below its historical high (July 2019) and matched the level on February 2020 (Chart 8).

Divergence in the recovery between investment and consumption will probably continue. Even though the outlook for activity in the short-term seems favorable, as we have mentioned recently, we consider medium-term challenges persist, particularly for 2Q22. Thus, it is possible February and March remained better (considering available data), albeit with higher uncertainty starting in April.

More structurally, we believe consumption is better positioned to keep growing. We could see an acceleration in coming figures given a recovery in employment –which probably will extend to the rest of the year–, signs of higher wages, and payments of social programs being brought forward prior to the electoral ban (although leaving a gap in resources in the second quarter of the year). In addition, greater numbers of people returning to in-person work schemes could have a positive spillover in consumption categories. However, price pressures should weigh at the margin, especially given the negative shocks from the conflict in Ukraine. As such, the latter, along with the effects that a new variant or the increase in contagions could imply, are the most relevant short-term risks.

For investment, we think the outlook remains more complex. Particularly, construction costs have maintained an upward trend, which, along with likely increases in financing costs –due to Banxico’s restrictive cycle– represent additional risks. Besides, ‘machinery and equipment’ could be limited by the latest wave of contagions in China, affecting both the imported category due to finished goods, along domestic sectors due to inputs used. However, other reports reflect dynamism in the development of industrial clusters in the north of the country. This mostly responds to nearshoring efforts of various US companies to diversify operations. Although positive, we believe the challenges described above are more worrying than those seen for consumption and may reduce part of the positive trend. 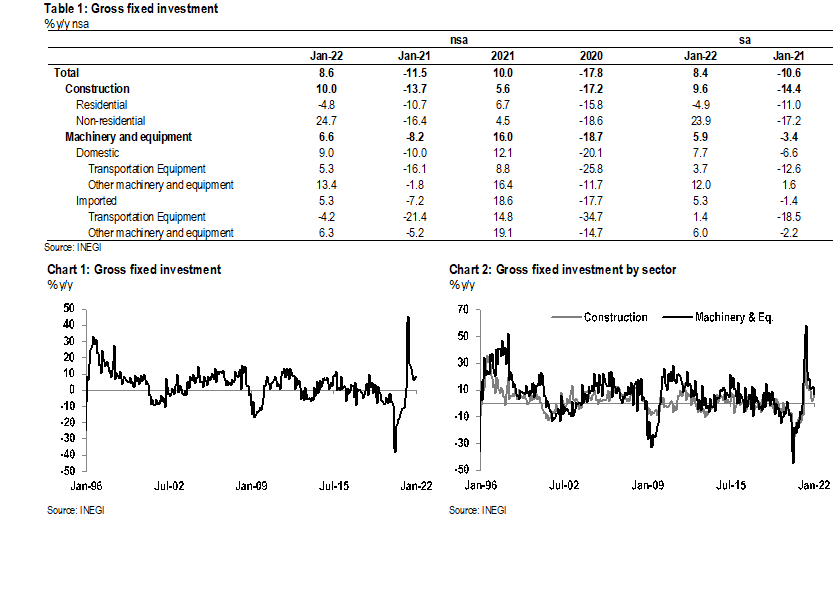 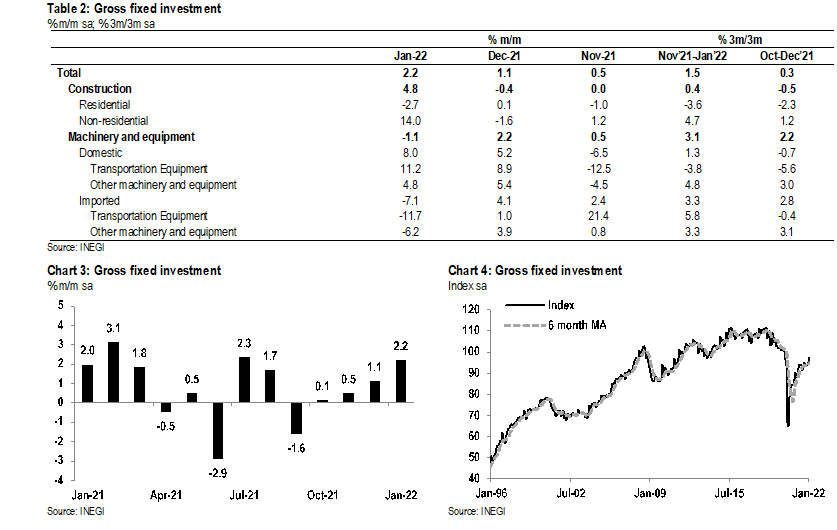 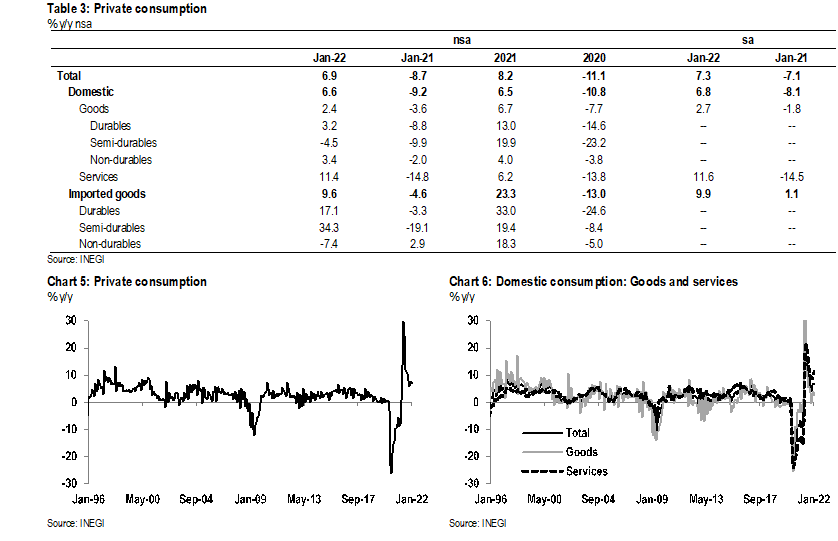 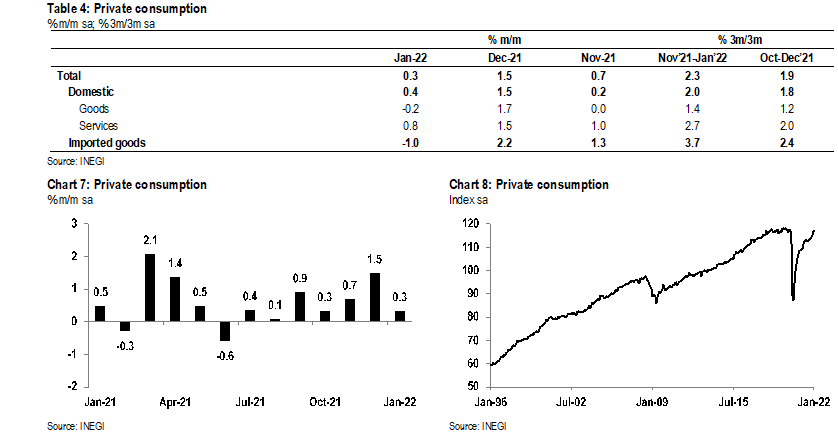