Investment moderates in February after a strong acceleration in the previous month. Investment came in at 1.7% y/y (see Chart 1), lower than consensus (4.3%), but practically in line with our 1.8%. Using seasonally adjusted figures, this implies +1.5% y/y. By sectors, and back to original data, machinery and equipment stood at 13.6%, with construction at -6.2% (Chart 2). Details can be seen in Table 1.

Sequentially (using seasonally adjusted figures), investment backtracked 3.0% m/m, breaking with four months of increases. However, we believe these results were skewed by the strong 2.7% increase of the previous month (Chart 3). With this, the sector stood 2.6% lower than February 2020 –used as a pre-pandemic metric– and 15.7% below its historical high in September 2015 (Chart 4). The decline is explained by the 8.2% contraction in construction, lower than suggested by the IP report. We think this is due to a decline in ‘services related to mining’, which in said report includes investment in oil infrastructure, but reflected in non-residential construction here. As such, this latter category fell 15.0%, even despite some boost coming from the government’s key projects. Meanwhile, residential remained to the downside at -1.1%, extending its negative trend for a second straight month. Machinery and equipment rebounded 6.7% (Table 2), boosted by the imported component (12.4%). This was better than the signal from the trade balance, although also coming on an easier base. Inside, dynamism centered in transportation (14.4%), with ‘other’ also high (11.8%). Meanwhile, the domestic component fell 2.9%, dragged by transportation (-3.4%), which on top of facing a more challenging base, showed more complicated signs based on the performance of the sector in IP. However, and despite dynamism in other production categories more closely related to ‘others’, this category fell 2.7%.

Consumption maintains a positive trend, with better fundamentals. The figure came in at 9.9% y/y, higher than the previous month (Chart 5). Distortions prevail across sectors, with imported goods (21.8%) and services (12.7%) boosted by base effects, which will likely dilute more strongly in coming months. Overall, we believe the decrease in COVID-19 cases and the consolidation of fundamentals played a key role. For details see Table 3.

With seasonally adjusted figures, consumption grew 1.3% m/m (Chart 7) adding eight months up and accumulating an expansion of 5.9% in this period. Despite an increasingly challenging base, the backdrop for this category has kept improving, with special support from: (1) The rapid decline in contagions, helping mobility to consolidate; (2) a recovery in employment, with remittances holding strong and consumer loans higher; and (3) earlier payments of social programs due to the electoral ban. Nevertheless, we still think that strong price pressures keep limiting additional dynamism. Inside, all categories were higher, but with imported goods (6.2%) outperforming. Meanwhile, and consistent with the factors outlined above, domestic services increased 1.6%, with local goods at +1.0% (Table 4). With these results, consumption is 0.8% above its previous historical high (July 2019) and 1.9% higher than in February 2020 (Chart 8).

We expect domestic demand to keep recovering, albeit with uncertainty in the pace for 2Q22, especially for investment. The outlook for March seems to have remained favorable, although with some caution signs in the implied figures within 1Q22 preliminary GDP. However, both sentiment (e.g. business and consumer confidence, IMEF’s PMIs) along activity indicators (e.g. trade balance) seem to contrast a bit with this, suggesting some underlying dynamism.

In the medium-term, signs are more uncertain, especially with greater doubts about investment. In addition to shocks from external factors –including the war in Ukraine and output disruptions in China–, some domestic risks seem to be gathering traction. Among these, we highlight persistent price pressures, impacting construction costs –especially for the residential sector– and machinery fabrication. In addition, credit costs for businesses will keep increasing given additional monetary tightening by Banxico, which could limit the sector even further. Nevertheless, interest surrounding the construction of industrial parks continues as part of nearshoring efforts. A couple of weeks ago, a development of 12 projects in the State of Mexico was announced, totaling $30 billion and which could be disbursed in the next 18 months. This comes on top of plans from the Federal Government to develop 10 more parks in the Tehuantepec Isthmus corridor, with an investment of at least $4.6 billion. We believe that, if interest in these projects continue –in addition to the boost from the public sector–, the impact of the abovementioned factors could decrease.

Meanwhile, the outlook for consumption seems more favorable. In terms of fundamentals, employment keeps recovering, managing important steps to return to the conditions seen before the pandemic. In addition, remittances remain strong, albeit with higher risks given the acceleration in monetary tightening in the US. Meanwhile, consumer loans seem to be gaining dynamism, which could also boost the sector.

In our view, the main risk continues to be the limits that price pressures and the relative scarcity of some goods imply. Although we expect a positive but limited impact from the recent government plan, problems from abroad continue to be quite large, potentially representing a larger drag for activity. In spite of this, our conviction is that positive factors will have a greater weight, resulting in a larger expansion of consumption this year. 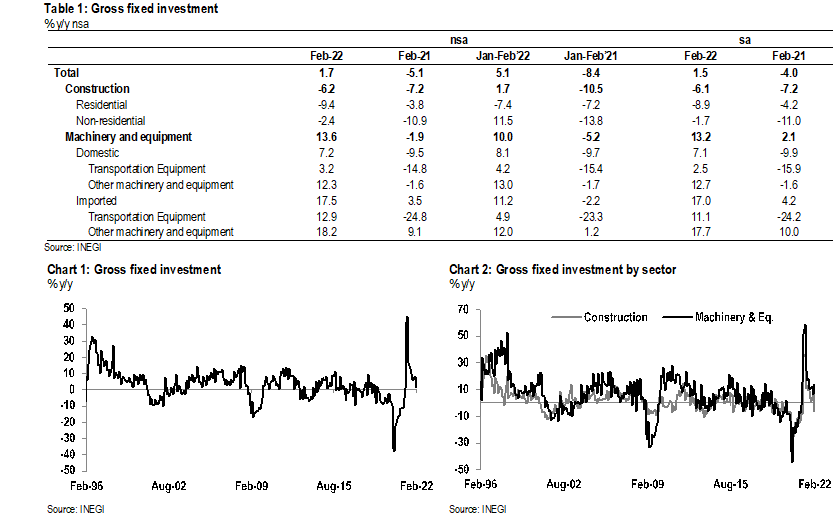 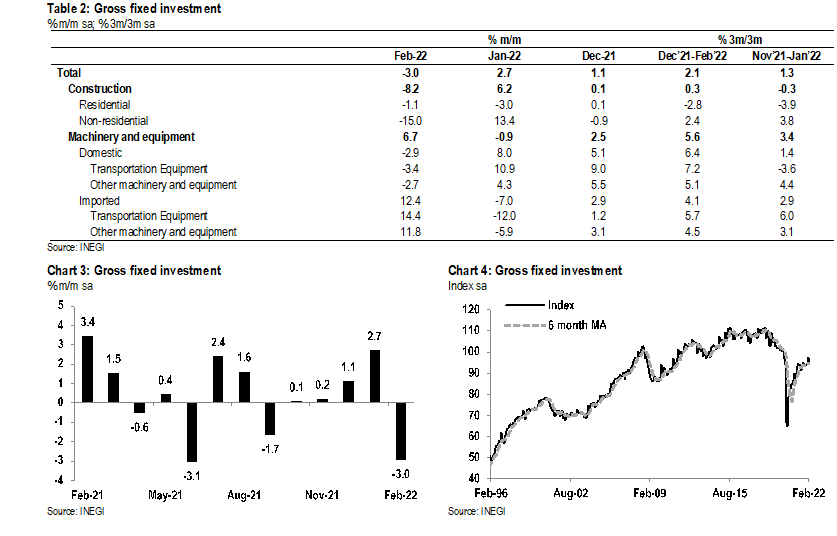 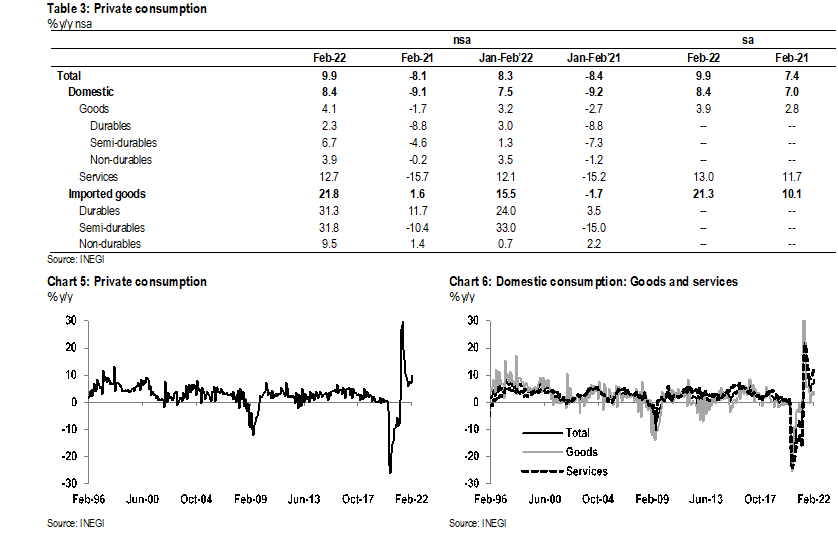 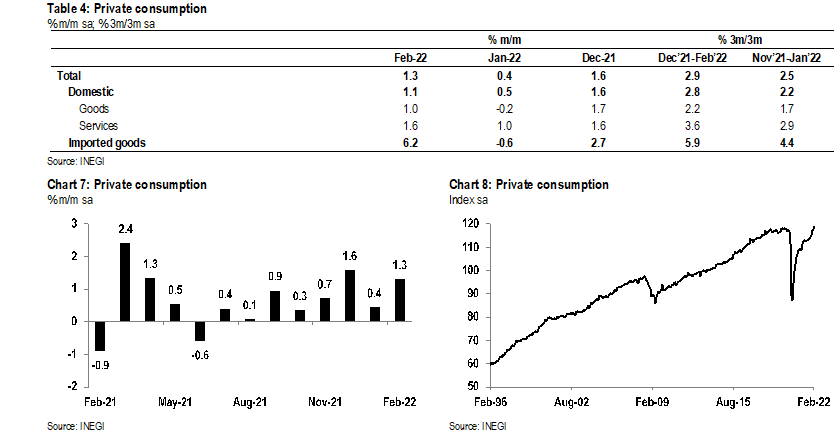