The MoF submitted to Congress its budget proposal for fiscal year 2023. The Minister of Finance, Rogelio Ramírez de la O, delivered yesterday the documents to the Lower House, which include: (1) The General Economic Policy Criteria (GEPC) –which states macroeconomic projections used to estimate the budget–; (2) the Revenue Law; and (3) the Spending Budget. In the first two cases, they must be approved by both the Lower House (October 20th) and the Senate (October 31st), while the spending budget should be approved only by the Lower House no later than November 15th.

Updated assumptions, stronger than consensus. Regarding GDP, mid-point forecasts stand at 2.4% and 3.0% for this year and next, respectively. The former is lower than in line with their previous forecast, but the latter is lower (previous: 3.5%, as seen in the table below). Nevertheless, both are above our 2.1% and 1.0%, respectively. The average USD/MXN was more stable, standing at USD/MXN 20.4 per dollar this year (previous: 20.1) and 20.6 in 2023 (previous: 20.8). We recall that a weaker peso has a slight positive effect on the fiscal deficit, as gains in terms of higher oil income expressed in local currency more than compensate for a higher financial cost in foreign debt. Inflation stands at 7.7% and 3.2% for the same periods, in line with the latest central bank forecasts. Regarding oil, the average price for this year is slightly lower than in the Quarterly Report, to 93.6 US$/bbl. For 2023 it stands at 68.7 US$/bbl (previous: 61.1 US$/bbl). Oil production for 2022 would be an inch higher, at 1,835kbpd from 1,805kbpd. For 2023 the adjustment was also upwards, at 1,872kbpd from 1,851kbpd in the preliminary version of the GEPC, released in April. Just as a reference, YTD production until July has averaged 1,696kbpd according to Pemex (considering just oil, as with condensates, the average rises to 1,779kbpd).

Higher fiscal deficit in 2023. Public Sector Borrowing Requirements (PSBR)  –the broadest measure of the fiscal deficit– were unchanged for 2022 at -3.8% of GDP. Nevertheless, PSBR for 2023 are projected at -4.1% (previous: -3.3%). According to the MoF, this was driven by two factors: (1) Higher payments related to inflation-linked debt and the use of financial assets to cover part of this expense; and (2) higher financing costs derived from rising interest rates. The public balance[1] would be at to -3.0% of GDP for 2022, with 2023 more negative at -3.6%. Lastly, the primary balance, was revised to +0.1% and -0.2% of GDP, in the same order. Full details are presented in the table and charts below. 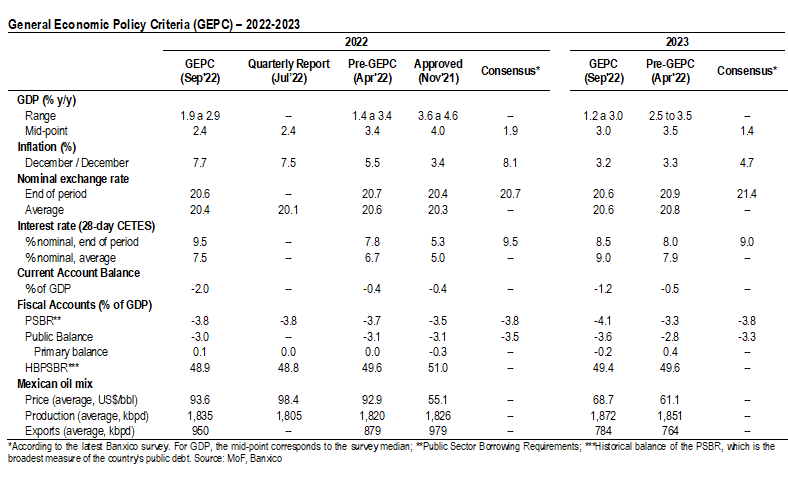 Stronger revenues this year... For 2022, total revenues are estimated at $6.7 trillion (US$330.0 billion), $560.4 billion more than originally approved in the 2022 Revenue Law. This is explained by higher oil-related income by $397.8 billion, as well as $162.5 billion in non-oil. Inside, tax revenues would be $61.0 billion higher, even after accounting for the additional subsidy to fuels. According to the head of the Revenue Service (SAT in Spanish), Raquel Buenrostro, these have had a cost so far of nearly $300 billion.

…with a modest uptick in 2023. For next year, revenues are estimated at $7.1 trillion (US$345.8 billion), up 0.8% y/y in real terms relative to this year’s updated estimate (see table below). Considering the new estimates above, a 15.5% y/y decline is expected in oil-related income as prices move lower, and despite a slightly higher output.

In this sense, the document states that the government has continued with its hedging strategy, specifying that the contracted amount fully covers next year’s expected output. Non-oil income would be 5.4% higher, factoring in 9.9% growth in tax revenues –with a special focus on excise taxes at +310.6% as fuel subsidies will likely decline next year– and non-oil, non-tax revenues contracting 25.8%.

More spending in 2022. Total expenditures for this year are projected at $7.6 trillion (US$560.4 billion) relative to the approved Spending Budget. In our view, the most salient adjustment was in the non-programmable component, specifically in the cost of financial debt, which would rise by $113.5 billion due to higher interest rates and consistent with the changes seen in fiscal balances.

Higher expenditures in 2023, prioritizing social programs again. For 2023, the MoF proposes spending of $8.3 trillion (US$400.9 billion), 3.4% higher in real terms relative to this year (see table above). The document highlights that spending is based on the three guiding principles of the National Development Plan. Flagship projects and programs are projected at $836.4 billion (US$40.6 billion), as shown in the table below, which represents an increase of around 34.6% (in real terms) relative to last year. Some of the most significant increases were in Pensions to the Elderly (31.3%) and in the Mayan Train (110.6%).

Important adjustments to programmable spending. This component would rise only 0.8% y/y in real terms relative to year-end 2022. Nevertheless, when compared to the Spending Budget approved for the current year, it is 8.2% higher. Based on the latter (which is the only available comparison), spending in autonomous branches would increase 5.4%. The National Electoral Institute (INE) would increase by 19.2%, recalling that elections will take place in the State of Mexico and Coahuila. Administrative branches are estimated to expand 16.3%. As in the previous year, ministries with some of the largest increments will be Tourism (111.2%) and Welfare (+30.0%). The former includes the Mayan Train and the development of sustainable projects. We should recall that social programs are accounted in the latter, as mentioned above. In state-owned companies, we flag the increase of 1.6% in Pemex, but with CFE at -6.9%. Lastly, IMSS is slated to rise 9.9%, with ISSSTE more modest at 5.4%.

Higher financial costs in the non-programmable component. This category’s total would be up 10.5% relative to estimated data for full-year 2022. Moreover, it would be 21.2% higher relative to the approved budget. With the latter benchmark, financial costs are expected to rise 29.9%, driven by higher interest rates, albeit also because of higher inflation. Transfers to states resulting from taxes collected at a federal level are estimated to increase 14.0%, as detailed in the following section.

More resources to federal entities. Total resources for states in 2023 would amount to $2.4 trillion (US$118.1 billion), up 9.9% from last year’s approved amount. This is driven by higher tax collection expected for the year, improving the availability of some of these resources. Apart from this, the government boosted contributions marginally, higher by 6.7% (see table below).

A marginal downtick in debt to GDP in coming years. For 2022, the Historical Balance of Public Sector Borrowing Requirements (HBPSBR) is now expected at 48.9% of GDP from 48.8% in the latest quarterly report. Nevertheless, it is about 70bps below expectations in the preliminary version of the GEPC. The forecast for 2023, as well as for the rest of the horizon (until 2028) was adjusted marginally lower, to 49.4% (see below). Lastly, public debt is estimated at 48.7% of GDP in 2022 and 49.2% in 2023. 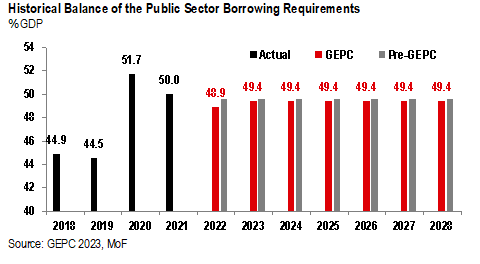 Additional insights in the conference call with financial analysts. The call was led by Rodrigo Mariscal Paredes, Chief Economist of the MoF; and María del Carmen Bonilla, Deputy Undersecretary for Public Credit. Among the key highlights we noted that the budget does not account for any additional stimulus for Pemex under the baseline scenario. As such, support would only be provided if the situation merits it, with the condition of not compromising the position of public finances. Regarding tax revenues, they expect modest adjustments, preferring to miss to the downside and have a positive surprise. Finally, they are working to replenish stabilization funds, with some resources already earmarked within the Treasury accounts.

The government continues prioritizing fiscal prudence, while pushing for higher social spending. We believe the budget proposal continues to reinforce the Federal Government’s commitment with healthy public finances, as they have done in the last four years. While some estimates seem optimistic relative to our projections and market expectations, it is our take that even if these are not met, the government will carry out any necessary changes in other to achieve these goals. Another relevant point is that measures continue prioritizing social programs and key infrastructure projects. All in all, we believe this budget supports our view that Mexico will maintain its ‘investment grade’ credit rating from the three main agencies, sustained by sound macroeconomic fundamentals and adequate policy actions.