Mexico: Banxico – 50bps hike, while not ruling out an even faster pace ahead

Banxico hikes 50bps again, but with a more hawkish tone than expected. With this, the rate reaches 7.00%, in line with our call and consensus. However, and contrary to our expectations, the decision was not unanimous, with Deputy Governor Irene Espinosa favoring +75bps. By itself, this adds a more hawkish tone to the decision. However, it was reinforced by: (1) Changes in the statement, especially the inclusion of the phrase that they would evaluate ‘taking more forceful measures’ to achieve their target; and (2) larger-than-anticipated upward adjustments in the forecasts (see table below), along with concerns about higher medium-term inflation expectations. Given these changes and signs of a faster tightening by the Fed, we are revising our monetary policy call. Specifically, we expect the reference rate at 9.00% by year-end (previous: 8.25%), with three more 50bps hikes each (June, August, September), followed by another two of 25bps (November and December). For 2023, we see the terminal rate at 9.50%, with two 25bps increases each at the start of the year. In addition, the risk of at least one 75bps hike has picked up, concentrated in the next two meetings.

Inflationary conditions remain difficult. In addition to previous shocks (the pandemic and the war in Ukraine), Banxico now added the possible effects of the latest lockdowns in China to the drivers behind adverse price dynamics. The balance of risks not only remains skewed to the upside, but “…continues deteriorating…”. The main factors that could increase it further did not change. To the downside, they now included a better functioning of supply chains in second place (was not stated before), the negative output gap (now third vs second previously) and the potential effects from the Policy Program to Fight Inflation and High Prices (new driver). Thus, the paths for headline and core inflation were revised strongly, with an average adjustment of +83bps for the next four quarters in the first and +65bps in the second. Likewise, they highlighted that market expectations for 2022 and 2023 “increased significantly”, while those for the medium-term increased.

A faster normalization is likely... After today’s decision and previously flagged as an upside risk, we adjust our estimated path and expect the reference rate at 9.00% by year-end (previous: 8.25%). We pencil in three more 50bps hikes (June, August, and September), followed by two more of 25bps (November and December). Several developments point to the need of adjusting to a restrictive stance more rapidly. Most relevant, the strong signal that the Fed wants the policy rate to reach neutrality soon. Hence, last week we revised our Fed funds rate forecasts higher, ending this year at 2.75% - 3.00% (chart below, left). The main drivers of our call are:

(1) Managing the short-term rate spread to the Fed. It is our take that Banxico’s reaction function puts an important weight on this metric, especially in an environment of tighter global monetary policy given its potential effect on capital flows and the exchange rate. In turn, this can affect current inflation and mid- to long-term expectations. We note that this spread has been around 6.00% since Banxico’s March decision, reestablishing it today given the lag between meetings. This is relevant when comparing it to the previous hiking cycle, which spanned from Dec-2015 to Dec-2018 (3 years). The highest spread back then was 5.75%, first reached virtually at the middle of the cycle (May 2017). It was maintained until late 2019 as fears of an economic deceleration increased, finally declining as the virus wreaked havoc on the policy outlook since March 2020. Although no two cycles are the same, we do not see an immediate need for the spread to widen further from here as the exchange rate has been resilient relative to other EMs, while mid- and long-term inflation expectations remain stable.

(2) Annual inflation will likely moderate until late 2022. We expect Banxico to cut the pace to 25bps steps in November, in tandem with the Fed. An open question in the market is if the central bank can decouple or not, as the tightening cycle started earlier than in the US. Based on our Fed and inflation views, it is our take that it will not be necessary nor desirable. In this sense, the chart below on the right shows our forecasts for annual inflation, with the textboxes placed on the latest inflation print that Banxico will know by the corresponding meeting. For example, by the September 29th decision, inflation for 1H-Sep will already be available, which we estimate at 7.3% y/y. This is important as we think it would be tough for the central bank to hike only 25bps with inflation above 7% and the Fed still moving in +50bps steps.

This rationale is also valid for June and August. In our estimates, annual inflation will exhibit a clear move lower (below 7%) until early October, despite leaving behind the peak since April. In our view, most members will be more comfortable of reducing the pace after this materializes, estimated to happen by the November meeting. With the Fed also lowering the pace by that time, Banxico can do the same and maintain a high spread to the Fed funds. Another relevant issue may be that some measures in the Plan against Inflation would be close to expiration in that month (assuming the start date in May and no renewal after the six-month period). This should give the central bank more elements to assess if these helped to contain price pressures in food items, constituting an additional factor to evaluate the best policy ahead.

…with this cycle’s terminal rate estimated at 9.50% (previous: 9.25%). To reach it, we see two more 25bps hikes at the beginning of 2023. In our view, there is high uncertainty about the terminal rate due to low visibility in several fronts (e.g. the effect of Chinese lockdowns, the length of the war in Ukraine and a possible extension in sanctions, food price dynamics, recession risks, and the degree of tightening in other economies). Nevertheless, we approximate a level based on our projections for the ex-ante real rate. First, the latest point-estimate of neutrality from the central bank is 2.6%, with an interval between 1.8% to 3.4%. With today’s increase, we estimate it at 2.4%, with restrictive territory to be reached until August, close to 3.9%. Additional hikes would take as high as 5.4% by early 2023 (see chart below, left). In absolute terms, this is above the previous cycle high (4.4%). Nevertheless, it should also be factored in that the Fed is also very likely to reach a higher rate than in the previous tightening cycle. In nominal terms, our US terminal rate estimate is 4.00%, above the previous high of 2.50%; with this, the real rate would reach about 1.5% by mid-2023, instead of a high around 0% before. It also incorporates more price pressures. For example, 12-month ahead inflation in the Fed survey of consumer expectations is currently at 6.3%, while it averaged 2.7% in 2016-2018 (range: 2.4% to 3.0%). Although this is likely to decline going into next year, other measures paint a similar picture (chart below, right). Overall, and based on these calculations, the US-Mexico real rate spread could reach as high as 4.5% - 4.9% in this cycle.

Higher risks of at least one 75bps hike on the possibility of more ‘forceful measures’. The most relevant addition in the statement was the phrase that “…Given the growing complexity in the environment for inflation and its expectations, taking more forceful measures to attain the inflation target may be considered…”. In our opinion, the main factors that could trigger this are: (1) More aggressive Fed hikes, which would be matched by Banxico; and (2) greater pressures in the inflation path, especially if annual core inflation keeps increasing. We see a low probability of the first one taking place, but the second one is more likely –although not our base case–. If this materializes, more members may side with Irene Espinosa, supporting +75bps in at least in one of the next two meetings. Given his skew in previous decisions, we believe the most likely candidate to join her is Jonathan Heath, while Gerardo Esquivel would likely not support that call. Therefore, we think it will be very important to identify and analyze comments from Governor Victoria Rodríguez and from Galia Borja to evaluate more carefully the balance of risks in upcoming votes, especially in the minutes (May 26th) and the Quarterly Report for 1Q22 (June 1st).

From our Fixed Income and FX strategy team

The market keeps seeing Banxico following the Fed. The initial reaction of local rates was muted. However, pressures in short-term securities were seen subsequently. It is worth noting that today was characterized by a strong rally in global sovereign bonds amid a heightened risk-off mood. Concerns of a strong economic slowdown have increased amid inflationary pressures and tighter monetary policies. Against this backdrop, the Mbonos’ curve ended a flattening bias. Short-term securities lost 8bps, while long-term tenors appreciated as much as 9bps. The 10-year Mbono closed at 8.84% (-3bps) after reaching highs since late 2018 of 9.15% on Friday. Hence, the market remains of the view that Banxico will be broadly anchored to the moves of the Fed. The curve is pricing-in three 50bps hikes in the next meetings and a high probability of two additional of +25bps. Therefore, the market anticipates cumulative implied hikes for Banxico and the Fed of +186bps and +184bps, respectively. This is very close to our new path of +200bps in the same period.

In our view, the market is likely to start pricing-in more aggressive moves at any of the June and August meetings after Irene Espinosa’s dissenting vote. In terms of strategy, we see value in long-term Mbonos, particularly in maturities Nov’42 and Nov’47, following a sharp cumulative adjustment in April of +85bps. Additionally, duration-adjusted yields also reflect greater value in this segment. In real rates, short-term Udibonos have recently shown greater relative value to Mbonos. In particular, the 3-year breakeven stands at 4.55%, a 100bps compression from historical highs reached in mid-April. However, this relative cheapening is not enough yet to start new directional positions.

In FX, the dollar reached new highs since 2002, with the DXY and BBDXY gaining 0.9% and 0.5%, in the same order. The Mexican peso appreciated modestly after the decision, albeit closing unchanged on the day at 20.24 per dollar. We remain USD bulls ahead amid a hawkish Fed and elevated risk aversion. At the same time, we consider MXN has little room for significant gains as the fair value is around 21.50 according to our models. This is equivalent to a 6.2% overvaluation. Therefore, in case of a defensive performance, we favor USD longs below the psychological level of 20.00. 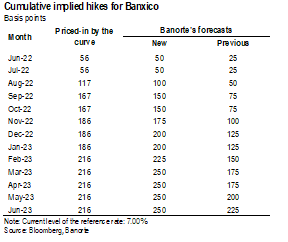