Attention on distortions from El Buen Fin on November’s inflation

Consumer confidence to improve in November. We expect confidence at 41.5pts (seasonally adjusted), higher than the 41.0pts in October. We believe sentiment improved due to several factors, including: (1) A moderation in non-core prices –at least through the first half of the month–, driven by a decline in LP gas; (2) the pandemic being left behind, with mobility consolidating at high levels; and (3) favorable dynamics related to year-end discounts and even a potential boost ahead of the 2022 FIFA World Cup. Another relevant push could come from MXN appreciation, with a strong performance during the last couple of months. Nevertheless, core inflation remains pressured, while Banxico hikes could also be clouding the outlook ahead. 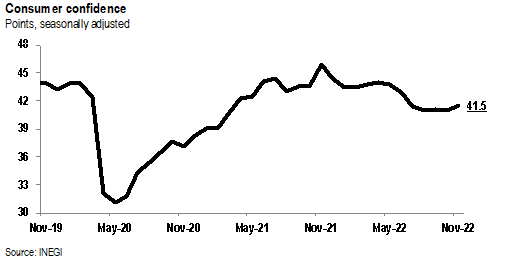 Investment to stabilize in September. We expect GFI at 5.3% y/y (previous: 6.5%), which in sequential terms translates into +0.1% m/m. This would be rather positive considering the 1.9% expansion of the previous month, in part aided by strong economic activity lately. However, the sector remains in a tight spot, with high costs –both of materials and financing– and uncertainty weighing on businesses’ decisions. As such, and despite the overall improvement, both subsectors would decline (with the contrasting results driven by the seasonal differences in seasonal adjustment models).

We forecast a 0.4% m/m decline in construction (-4.3% y/y). This would be lower than the sector’s performance in the IP report, coming in at +0.2%, albeit with the latter result benefited by a less challenging base effect –at -1.7% vs. +0.3% in GFI. Timely data suggests some progress in civil engineering, but with edification still to the downside. This could translate to a decline in the residential sector, with non-residential projects rebounding at the margin. Related to the latter, physical investment spending by the Federal Government remained high at +19.1% y/y in real terms.

In addition, key sectors within manufacturing within IP suggest some weakness. Among them, we note transportation (-2.9% m/m), albeit with others to the upside, such as machinery and equipment (+4.0%). We must note that some sectors keep facing challenges despite the overall improvement in supply chain conditions. Data is better on the imported component, explaining our +0.5% forecast (+20.9% y/y). This would contrast with the decline of the same magnitude in capital goods imports, although we think that some of the 3.1% expansion of the previous month might flow through to September. Meanwhile, we anticipate some benefits from a more stable MXN, albeit partially dampened by heightened recession fears.

All in all, we believe the backdrop for investment remains very challenging, with risks from abroad likely weighing. Nevertheless, several reports suggest that the country has benefited –and has potential to benefit further– from nearshoring efforts, acting as a much-needed catalyst. 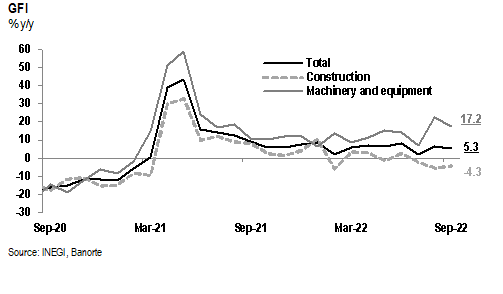 Consumption to improve modestly in September. We anticipate an additional sequential increase, building up on the +0.7% m/m of the previous month. Both timely signals and fundamentals were mixed –with a slight tilt to the upside–, leading us to believe that dynamism will extend, albeit at a more moderate pace. Activity was strong, up 0.7% m/m according to the GDP-proxy IGAE, with services driving the result (+1.0%). However, retail sales –at least according to its own report– were still lower at -0.2%. Also modest, non-oil consumption goods imports were practically flat at +0.1%. On fundamentals, remittances added a fifth month in a row above $100bn in MXN, while wages rebounded at the margin. Nevertheless, employment backtracked, with seasonal distortions still in play. Lastly, price dynamics were mixed, with a decline in LP gas possibly helping offset some of the adverse pressures in food within the core. Going forward, we believe these could gather speed, with positive results in October’s ANTAD sales and a further acceleration in IMEF’s non-manufacturing PMI in November.

Headline inflation down further, but with the core still up. We anticipate headline inflation in November at 0.69% m/m (previous: 0.57%). There would be some sharp differences relative to the first half, with a favorable seasonality from El Buen Fin (Mexico’s Black Friday) benefiting the core (0.53% m/m; contribution: +40bps). On the contrary, some of the favorable trends at the non-core would be partially offset, albeit with the overall result still positive at +1.16% (+29bps). If our estimate materializes, headline inflation would moderate to 7.92% y/y on average from 8.41% in October. The core would accelerate once more, to 8.60% from 8.42%, adding 24 months of increases. Lastly, the non-core would fall to 5.97% from 8.36%, its lowest level since early 2021.

Back to the monthly performance, the core would be mixed given price discounts in the second half for some categories. Goods would stand at 0.5% (+22bps). Most of the contribution would be from processed foods (0.7%; +16bps), with our monitoring showing increases in flour-based items such as bread and tortillas. ‘Other goods’ would come in at 0.4% (+7bps). As such, the markdowns in the second half would not be enough to reverse increases in the first fortnight. Some of the discounts might not be fully reflected as cashback and other financing arrangements in credit cards have been increasingly relevant. Turning to services (0.5%; +17bps), housing would remain subdued at 0.2% (+3bps). On ‘other services’, performance would be more mixed at 0.9% (+15bps). While tourism categories would also benefit from the discounts, the monthly reading would be somewhat flat as these already expanded in the first half. Meanwhile, non-tourism services would remain pressured on higher input costs, not ruling out an additional boost because of higher traffic in restaurants due to World Cup matches.

The non-core would remain high in absolute terms due to its adverse seasonality. We must recall that energy is quite high at 3.3% (+31bps), impacted by the end of the second block of discounts in electricity tariffs (20.3%; +35bps). Meanwhile, the overall result from LP gas would be to the downside at -2.3%  (-4bps), despite some pressures in the latter part of the month on higher international references. Gasolines would have shown an opposite behavior, with the final outcome to the upside despite some relief in the second fortnight. As such, low-grade fuel would have climbed 0.1% (+1bp). Similar to LP gas, agricultural goods would have rebounded towards the end of the period, but still negative as a whole at -0.3% (-3bps). In fruits and vegetables (-0.7%; -4bps) we identified pressures in the second half in key items such as chilies and tomatoes, albeit with onions and bananas declining. Lastly, in meat and egg (0.1%; +1bp), our monitoring suggests an increase in beef, which has a larger weight in the index than chicken, with signs of moderating.