GDP to climb for a fourth consecutive quarter in 3Q22. We forecast a 4.1% y/y expansion (previous: 2.0%), which implies sequential growth of 1.3% q/q with seasonally adjusted figures. Contrary to our original view, this would equate to an acceleration relative to the +0.9% of the previous quarter. This would be very favorable, with strength in fundamentals (e.g. employment, remittances and credit), along external demand resilience. These likely offset other adverse developments, such as: (1) Additional inflationary pressures, impacting household’s income; (2) faster monetary tightening by global central banks; and (3) increased risks about a recession heading into the end of the year or in 2023. In this backdrop, we keep seeing differences across sectors, anticipating higher dynamism in services, up 1.6% q/q (4.0% y/y), with industry also high at 0.8% (3.6% y/y). Lastly, primary activities would expand 0.6% (1.6% y/y).

Considering that we already have figures for the first two months of the quarter     –with an average expansion of 3.5% y/y–, we turn our attention to September. Our GDP estimate implies null growth (0.0% m/m) in the period’s GDP-proxy IGAE (+4.7% y/y). In our view, this would be partly explained by a challenging base effect –following the 1.0% sequential uptick in August– and some negative signals for several sectors, as outlined in the next paragraph. Despite of this, and especially considering the upside surprise in August, our estimate is considerably higher than implied by INEGI’s latest Timely Indicator of Economic Activity.

By sectors, we forecast sequential growth in industry. Signals for manufacturing are mostly positive, with IMEF’s PMI for the sector back to positive territory at 50.1pts. Meanwhile, the trade balance showed manufacturing exports at +5.7% m/m, supported by ‘others’ (6.4%), in line with US dynamism. Auto production seems to have experienced some payback, falling 2.5% after +5.1% in August. Mining would be negative, with CNH data showing a slight moderation in oil output to 1,619kbpd (previous: 1,626kpbd), while gas was relatively stable. Non-oil exports declined modestly (-1.4%), likely impacted by an additional move lower in prices, with their net effect possibly slightly positive. In construction, employment according to INEGI was favorable, with +71.7 thousand new positions. However, survey data is mixed, with the aggregate trend indicator marginally higher, but business confidence declining. As such, we believe the latter sector contributed positively to the total result.

On services, we forecast a marginal decline, as some sectors still resilient. Overall, IMEF’s non-manufacturing indicator decelerated for a second month in a row to 50.9pts, lowest since January. By sectors, tourism could be strong, with timely data on hotel occupancy rates suggesting dynamism, while air passenger traffic stayed high (using figures from privately operated airports). Commerce, figures were more negative, with ANTAD sales decelerating, even on the same-stores metric, which was negative in real terms (-0.5% y/y). Auto sales fell 1.2% m/m. Education and healthcare may be mixed, with the first one likely benefiting from the return of in-person teaching after two years of pandemic, while the latter could remain impacted by the additional decline in contagions. 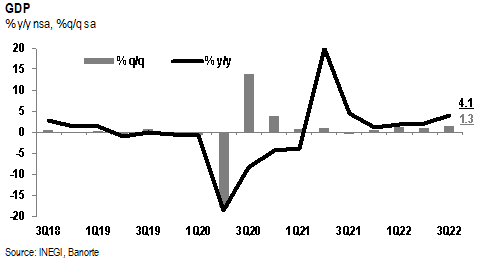 Banking credit to maintain momentum in September. We anticipate a 3.6% y/y expansion, stringing six months growing. We believe the recovery continued, helped by several factors such as an additional improvement in fundamentals and some slack in loan dynamism relative to economic activity. Meanwhile, high inflation levels are having mixed effects. Specifically, there is some evidence that families are turning to loans to smooth out their consumption, with credit card operations gaining strength recently. Nevertheless, the arithmetic effect remains negative, as inflation held at 8.70% y/y in September. Finally, we believe reference rate hikes could be starting to have an effect in some sectors, such as corporates. In the detail, consumer loans would stand at 6.4% (previous: 6.2%), corporates at 2.3% (previous: 2.1%) and mortgages at 3.3% (previous: 2.9%).

Remittances to slow down on seasonality, albeit still boosted by favorable US employment conditions. We expect remittances at US$4,973.0 million in September, below the US$5,121.5 million of the previous month. However, this would imply a 12.8% y/y expansion, much more favorable than the +7.8% seen in August. In our view, dynamism would be underpinned by favorable employment conditions in the US. In this sense, non-farm payrolls showed a net creation of 263k positions, moderating from 315k in August, but with the unemployment rate lower to 3.5% (previous: 3.7%). The latter metric had a slightly larger improvement for Hispanics and Latinos, down to 3.8%, its lowest ever. On a similar tenor, we estimate that it declined by 116bps –to 3.5%– among Mexicans.

The working age population –including ‘natives’, ‘non-native citizens’, and ‘non-citizens’ (legal or illegal)– increased by 147k, in line with its seasonality. Moreover, there were 378k more employees, recouping last month’s losses. In our view, these results suggest that August’s apparent deterioration in labor conditions could have been mostly temporary, with these improvements still key for flows.

Regarding activity, early PMI data –especially from S&P Global– suggests an additional recovery. This was supported by IP, while data from the housing sector was more mixed, noting a slight uptick in building permits. Price challenges remain, with CPI surprising higher at +0.4% m/m (+8.2% y/y), still with relevant pressures in core categories, such as transportation and healthcare services. We believe that inflationary pressures could hinder the total amount sent, even with employment conditions still as the main driver.

All in all, we continue to believe that risks for flows are tilted to the downside. Nevertheless, we have no doubt that migrants will keep going above and beyond to send resources back to their families. Hence, this result would be consistent with our forecast for full-year 2022 flows between US$59 and US$60 billion. 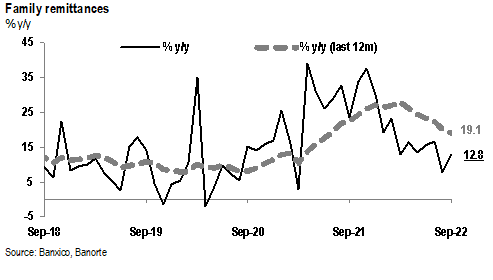 Banxico’s survey of expectations. Focus will be on inflation, growth, the reference rate, and exchange rate. On prices, the year-end 2022 median is at 8.4%, still lower than our 9.0% forecast. Considering additional price pressures –such as the ones that drove our change–, we cannot rule out further adjustments. Nevertheless, recent downward surprises may prevent this. We do not see substantial moves in medium and long-term expectations, remaining above target. On GDP, the 2022 estimate is 2.0% (Banorte: 2.1%), with 2023 at 1.2% (Banorte: 1.0%). The reference rate stands at 10.25%, below our 10.50%, with the following year at 9.75%. Lastly, the exchange rate stands at USD/MXN 20.62 by December (Banorte: 20.70), not anticipating large adjustments despite recent volatility. An additional depreciation is expected for 2023, towards USD/MXN 21.38.

In October, mixed performance inside IMEF’s PMIs. Specifically, we see a modest drop in manufacturing, erasing the progress of the previous month. Meanwhile, non-manufacturing would rebound after two months down. These results would be consistent with our call of a slight slowdown within industry, with services better at the margin.

We expect manufacturing at 49.5pts (from 50.1pts) on further headwinds, highlighting US industry. S&P Global’s PMI manufacturing of said country contracted significantly to 49.9pts –below the 50pts threshold for the first time since June 2020. According to the report, producers felt the impact of both inflation and the build-up of inventories, in addition to weakening demand. Locally, inflation impact would also be a limiting factor, while supply chain problems –mainly in the auto industry, but not limited to it– are still present. According to Luis Espinosa Rueda, president of CANACINTRA in Puebla, “...unfortunately this is going to continue, it was expected that this would be normalized by now or next year, what assemblers tell me is that the shortage will still be present in the middle of next year…”. Hence, Volkswagen Puebla will have a partial technical stoppage this week and a full one is scheduled for the first week of November. In this context, we could see slight declines in both ‘new orders’ and ‘production’, although we do not rule out a modest improvement in ‘employment’. Finally, we continue expecting volatility in logistics’ categories: ‘deliveries’ and ‘inventories’.

Non-manufacturing would recover modestly from 50.9pts to 51.4pts. In our view, this could be justified by entertainment activities (highlighting tourism) on activities ahead of the ‘Día de Muertos’ festivities –Tourism Ministry calculates a consumption expenditure of $37.7 billion–, and from Mexico City’s Grand Prix. On the latter, the Chamber of Commerce, Services and Tourism of Mexico City estimates a positive impact of $15 billion, +13.6% relative to 2021. On the contrary, growth remain dampened by price pressures. The 1H-October inflation posted its third consecutive fall in annual terms (in the fortnightly comparison). Nevertheless, upward pressures continue for both food and services at the core. We do not rule out that the decline in LP gas prices could alleviate input costs for many businesses (and for industry). In this context, we anticipate that index could be helped by an increase in most of its subcomponents, mainly in ‘new orders’ and ‘production’. 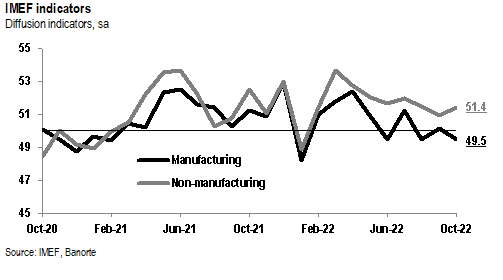