Inflation mixed in 1H-October, albeit with an upward skew on the period’s negative seasonality

Inflation in 1H-October pressured by the negative seasonality in electricity tariffs. We forecast the headline at 0.49% 2w/2w (previous: 0.10%). The period has a negative seasonality due to the first reversal of summer discounts on electricity tariffs. However, we expect this impact to be partially mitigated by more favorable dynamics in other energy items, mainly LP gas. In this backdrop, we anticipate the core at +0.33% 2w/2w (contribution: +24bps), with the non-core up 0.96% (+24bps). With these estimates, annual inflation would stand at 8.58% from 8.70% on average in September. The core would be more stable at 8.29% (previous: 8.28%), although maintaining its upward trend, with the non-core moderating to 9.47% (previous: 9.96%)

At the core, goods would continue rising (+0.4%; +16bps). Once again, pressures from processed foods would stand out at +0.5% (+10bps). In this regard, we remain attentive to the implementation and impact from the additional measures to the ‘Plan Against Inflation’ –announced on October 3rd–, which we consider positive, although with a limited effect due to the global nature of this inflationary cycle. On the other hand, ‘other goods’ (+0.3%; +6bps) would moderate slightly. Services (+0.2%; +8bps) should be driven by ‘others’ (+0.4%; +6bps), where we continue to see input costs passed on to consumers. In addition, the contribution of airfares (+1bps) and tourism services (0bps) would be positive, although limited, with the former probably influenced by higher international prices of jet fuel. Lastly, housing would be lower at the margin, at +0.1% (+2bps).

Within the non-core, agricultural prices (+0.6%; +7bps) would accelerate vs. the previous fortnight. Fruits and vegetables are expected to rise 1.0% (+6bps), with our monitoring providing mixed signals. We observed considerable declines in avocadoes, potatoes, and onions, but relevant pressures in tomatoes and husk tomatoes, among others. ‘Meat and egg’ would be lower, at +0.2% (+2bps), with drops in eggs and beef. In energy (+1.8%; +17bps) and already mentioned, we anticipate a drop in LP gas (-5.4%; -11bps), although more than offset by the rise in electricity (+18.7%; +27bps) and gasoline, mainly low-grade (+0.1%; +5bps), with the latter impacted by the rise in international prices. Finally, government tariffs would climb 0.1% (+1bps).

August’s GDP-proxy to take a slight step back, hindered by services. We expect 3.7% y/y growth, higher than the 1.3% in July. Nonetheless, with seasonally adjusted figures it would stand at 2.8% y/y, with the spread explained by one more working day in the annual comparison, among other factors. This would be lower than the mid-point in INEGI’s Timely Indicator of Economic Activity, at 3.2%. More importantly, this would imply a 0.2% m/m contraction, consistent with our view of a moderation in the pace of economic activity on increased headwinds.

As already known, industry was unchanged at 0.0% m/m (+3.9% y/y). We saw mining up (+0.4% m/m) –supported by non-oil– and resiliency in manufacturing (-0.1%), noting some strength in key categories such as transportation and electric equipment.

However, construction fell further (-1.7%), with broad weakness. Moreover, we see the primary sector at +0.1% (-0.8% y/y), quite modest considering mixed signals from the trade balance and prices, noting in the latter declines in meat and egg, but a push in fruits and vegetables.

Data in services is mixed, anticipating a 0.1% m/m contraction (+3.8% y/y). We expect most of the drag from additional price pressures, with inflation accelerating in the period. However, strength in fundamentals, highlighting employment and remittances, may have provided some support. In this context, IMEF’s non-manufacturing PMI moderated to 51.5pts (-0.4pts), noting declines in ‘production’ and ‘new orders’. Performance across sectors could be mixed. We expect consumption-related categories negative, as suggested by the 0.4% m/m drop in the stand-alone retail sales report. Meanwhile, tourism remained strong despite a slight seasonal moderation, suggesting that the spillover effect from the holiday may have extended further. This is both evident in a high number of air passenger traffic and hotel occupancy rates. Turning to more essential categories, we could see a rebound in financial and professional services after a slight decline in the previous month, while education and healthcare could moderate on the back of the holiday period and lower contagions.

Further improvement in labor conditions in September, with seasonal distortions starting to fade away. We estimate the unemployment rate at 3.42% (original figures), down from 3.53% in August. Part of the adjustment is driven by seasonality, with a moderation given more ‘normal’ conditions in the labor market after the summer holidays, aided by the start of classes. As such, with seasonally adjusted figures we anticipate an improvement to 3.20% (previous: 3.28%). We believe that job creation will continue (although at a more modest pace), supported by the return to in-person teaching after nearly two years of remote or hybrid classes. It is our take that this could allow for additional people to look for and get jobs, as their home obligations decrease. In addition, virus conditions kept improving, which may tilt some people and companies in a positive direction. While these trends would be consistent with an expansion in the labor force, we could see a slight moderation, which would match the period’s seasonality. Additional improvements in part time rates and informality would also be welcome. Lastly, we will continue to pay close attention to wages, which are becoming increasingly relevant as they have shown a slight downward trend, exacerbating the impact from mounting inflationary pressures.

Most timely data is favorable. IMSS reported 172.5 thousand new jobs. More importantly, this is equivalent to 43.1 thousand new positions with seasonally adjusted figures, lower than the +66.7k of the previous month, but still positive. In aggregate trend indicators, employment components in three of the four major items (manufacturing, construction, and services) ticked up, with only commerce lower. IMEF indicators were somewhat mixed, with +1.4pts in manufacturing, but non-manufacturing down -0.4pts. Consistent with the latter, the S&P Global manufacturing PMI points to an expansion, stating that “…Upbeat sentiment underpinned job creation in September, following reductions in employment in the prior two months…”.

Going forward, we believe economic risks are increasing, mainly on additional inflationary pressures and monetary tightening. However, employment conditions could keep a favorable trend in the short-term, supported by domestic resiliency and still some slack. 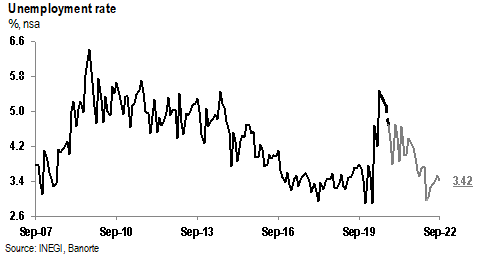 September’s trade balance will stay with a wider deficit, despite a likely moderation on lower prices. We estimate a US$4,829.6 million deficit, moderating relative to the -US$5,498.2 million in August. Exports and imports would grow 20.0% and 24.6% y/y, respectively. Commodity prices and transportation costs kept declining, which will result in lower flows due to their nominal nature. However, annual comparisons will remain high given that prices have not fully normalized. Regarding other drivers, Chinese supply seems to have improved modestly, while conditions in the US were also better.

We anticipate a US$4,002.9 million oil deficit, moderating relative to August. We see lower flows given an additional drop in prices, albeit with mixed signals in volumes. We expect exports at +11.2% y/y and imports at +44.5%. The Mexican oil mix averaged 81.84 US$/bbl (+21.1% y/y) from 87.27 US$/bbl (+35.7%). Nevertheless, outbound volumes show a slight recovery in shipments to the US, which would explain the lower deficit. Inflows would be more relevant as volumes declined, especially after an important acceleration in the previous month. In addition, prices also trended lower, with front-end gasoline futures falling from 2.91 US$/gallon to 2.45 US$/gallon.

We expect a US$826.6 million deficit in the non-oil balance, with a moderation in both exports (+20.5% y/y) and imports (+22.2%). In the former, we forecast a modest rebound in agricultural goods (+15.5%), with mixed signals from prices, but with drought conditions in the US prevailing. Non-oil mining would decline sequentially again on lower prices of metals and other raw materials, standing at 4.0%, benefited by a less challenging base. Manufacturing exports (+21.0%) would be boosted again by autos at +34.0%, with positive signs from both AMIA and US industrial production. ‘Other’ would also be positive (+15.3%), rebounding on more positive signs out of the US after a recent moderation. In imports, flows from China seem to have improved again, albeit with data for September still unavailable. In addition, transportation costs have remained to the downside. While favorable for volumes, this could have an adverse effect on final flows. In this context, we expect consumption goods’ imports at +30.0%, with more evidence of an inventory build-up ahead of the holiday season. Intermediate goods would be relatively stable at 21.0%, possibly rebounding sequentially. Lastly, capital goods could decelerate (24.5%), not ruling out some weakness as recession fears increased.

MoF’s public finance report (September). Attention will center on the Public Balance and Public Sector Borrowing Requirements (PSBR), which accumulated a year-to-date deficit of $362.1 billion (until August). We do not expect much changes despite being a quarterly report –in which updates to macroeconomic and fiscal estimates are released– as the General Economic Policy Criteria were released a relatively short-time ago (in early September). In revenues, oil-related will probably remain high due to prices, awaiting data on income taxes and VAT collection. In addition, we will pay attention to excise taxes, possibly returning to positive as the complementary stimulus to fuel taxes ended were not necessary in the period. On spending, financial costs and programmable spending –especially in autonomous and administrative branches– will also be important, along with progress in Pemex and CFE outlays. Lastly, we will analyze public debt, which amounted to $13.3 trillion in August (as measured by the Historical Balance of the PSBR). We believe that the analysts call could take place on Monday, October 31st, although we are still waiting for confirmation from the MoF.