US deceleration likely affected remittances in June. We expect remittances at US$4,944.7 million, up 10.9% y/y and decelerating at the margin after a new historical high in absolute terms in May. Moreover, accumulated growth in 1H22 would have reached 15.7%, still very favorable for consumption in Mexico. Despite of this, data suggests a deceleration of US economic activity and the labor market, without ruling out another sequential decline after dropping 1.5% in the previous month.

The US economy kept creating jobs, with nonfarm payrolls at +372 thousand and the unemployment rate for a fourth month in a row at 3.6%. For Hispanics and Latinos, the latter metric was also unchanged, standing at 4.3%. Nevertheless, we calculate that among Mexicans, it increased to 4.5% from 4.2%. In this respect, we saw a fall of 495.8 thousand in the working age population –including ‘natives’, ‘non-native citizens’, and ‘non-citizens’ (legal or illegal)– after two months reaching new maximums, with the total at 27.8 million. Total employees fell by 307.5 thousand, with the largest drop in ‘natives’ at -291,668. The labor force was also lower, which could be because of the rise in COVID-19 cases and voluntary lockdowns (as the government has not reimposed mobility restrictions again).

Although the latter factor may have affected, we also had signals of an economic deceleration. Regular gasoline prices reached new highs since the series is available (1990), reaching US$4.87 per gallon. In our view, this is important as it impacts households’ purchasing power, with real average hourly earnings more negative (-3.6% y/y). In this backdrop, retail sales grew 1.0% m/m, but we are very cautious with this figure as it is distorted to the upside given that it is expressed in nominal terms. On the other hand, industrial production (in real terms) contracted 0.2% m/m, with the ‘employment’ component within the ISM manufacturing also declining. The construction sector, which is an important employer of Mexican migrants, showed also lower housing starts, construction permits and existing home sales in June. We think this is starting to reflect the effect of the Fed’s hiking cycle. Despite of this, the employment report showed 13 thousand new positions in this sector, which is positive despite decelerating at the margin.

We maintain our remittances forecast at US$56.5 billion for full-year 2022. Nevertheless, downside risks could be on the rise. Hence, we will analyze the report closely in search of signs of a deterioration. On the contrary, we highlight that economic weakness –with 2Q22 GDP falling 0.9% q/q saar– has not translated yet to a significant loss of labor opportunities. This situation may partially isolate inflows due to a more modest economy, albeit with risks of an eventual impact still present, but that could be reflected more clearly by the end of the year or into 2023. 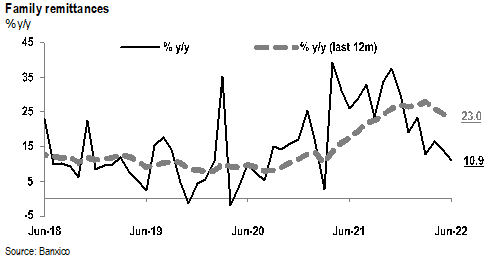 Banxico’s survey of expectations. As usual, focus will be on inflation, growth, the reference rate, and exchange rate. On prices, the year-end 2022 median is at 7.5%, lower than our forecast at 8.1%. Considering additional pressures, we could see a further increase. Meanwhile, we do not see substantial changes in medium and long-term expectations, remaining above target. On GDP, the 2022 estimate is at 1.8% (Banorte: 2.1%), not expecting sharp changes as forecasts were submitted before the preliminary print for the second quarter was released. The reference rate by the end of the year stands at 9.50%, below our 10.00%. Based on the latest private sector survey, this number could stay unchanged. Lastly, the exchange rate stands at USD/MXN 20.79 (Banorte: 20.70) by December, not anticipating large adjustments despite persistent volatility.

IMEF PMIs to start 3Q22 on a positive note, with both indicators rebounding. We expect both PMIs to improve, partly recovering from losses in the previous month and setting a relatively more positive print for the start of 3Q22. Nevertheless, some challenges have prevailed while some others have even gained in importance, limiting the room for a stronger rebound.

We expect a larger recovery of manufacturing, coming back to expansion at 50.1pts from 49.2pts previously. The sector could regain some ground despite adverse signs from the US, where S&P Global’s manufacturing PMI showed a moderation to 52.3pts from 52.7pts, with weakness centered in ‘new orders’. The report mentions a slight decline in input costs, which could help offset for a less optimistic view ahead. On the contrary, intermediate imports in June were positive, which on top of better Chinese exports to our country, might suggest more dynamism. At the margin, the relative stability of the MXN against other EM currencies could also be positive, partly limiting the effect of high raw material prices. Locally, reports of technical stoppages in auto plants decreased relative to the previous month. Related to this, VW’s Director of Corporate Relations, Mauricio Kuri, mentioned that they are looking to surpass the output of the previous year, recognizing that vehicle demand exists, and production needs to improve to satisfy it. In this backdrop, the increase would reflect an improvement in ‘new orders’, still expecting volatility in ‘deliveries’ and ‘inventories’.

Non-manufacturing would also see some dynamism, improving to 52.3pts from 51.8pts. We think the main boost would come from the resumption of payments from social programs after the electoral ban expired. According to the Welfare Ministry, around 12.1 million persons received payments for the July-August period this month, with a total disbursement of over $50 billion. Pandemic conditions were more mixed, with the peak in contagions in this wave reached in the first half of the month, moderating subsequently. Despite of this, mobility has remained resilient, which could limit the shock. On a negative note, our main concern are remains on inflation dynamics, especially after an acceleration in food items in the first fortnight. Considering this, ‘production’ and ‘employment’ could concentrate most of the move higher. 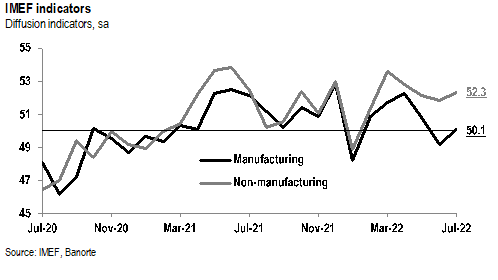 Consumer confidence to rebound marginally in July. We expect confidence at 44.0pts (seasonally adjusted), marginally higher than the 43.6pts in June. In our view, sentiment may have rebounded slightly due to the resumption of social programs’ payments after the electoral ban, along relative stability in energy prices. However, the outlook is still quite challenging, especially considering the latest wave of COVID-19 cases, noting a new high for this cycle of 39.1 thousand cases on July 11th –similar to those seen in late January–. Other factors that may remain as a drag include persistent increases in food prices (both processed and fresh) along prevailing financial market volatility –with sharp moves in the MXN and a depreciation vs. the previous month–. 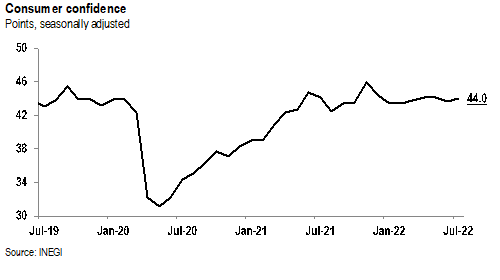 Investment to drop slightly in May. We expect GFI at 8.1% y/y (previous: 7.0%), boosted to a great extent by one additional working day in the annual comparison, while in April there was one less because of the timing of the Easter holiday. With seasonally adjusted figures, we see a 0.1% m/m contraction. This would be modest considering growth accumulated in the past two months. On the other hand, the economy was weaker according to the GDP-proxy IGAE, albeit with industry stringing three consecutive months up, which is relatively favorable for investment.

Specifically, this would be driven by a 1.3% m/m fall (+1.0% y/y) in construction. According to industrial production, the sector contracted 0.6%, dragged by edification that fell 2.2%. The difference would be influenced by mining-related services, a category that has been very volatile in recent months and that corrected heavily (-16.9%) in May. Nevertheless, its impact in the category would be limited as its influence is probably low. Moreover, employment in the sector fell by 33,615 positions in the period, adding two months down. On the contrary, and more positive for the non-residential sector, civil engineering remained vigorous as it advanced 7.7%. The latter is consistent with +11.6% y/y growth in real terms in federal government spending in physical investment. Hence, the contraction that we anticipate would not be so negative considering recent dynamics.

We see more relative resiliency in machinery and equipment, at -0.3% m/m (+16.8% y/y). This would be explained by the domestic component, up 0.2% despite rebounding 3.4% in May. Sectors such as machinery and equipment, transportation, and electric appliances (all of them at 0.6%) within industrial production signaled dynamism. To the latter we add a still favorable performance of external demand, reflected in manufacturing export growth. On the other hand, the imported component is expected to backtrack 1.7%, impacted by a difficult base effect (as it grew 5.3% in April). Capital goods imports dropped by a similar magnitude (-1.5%) in the trade balance. Despite of this, they have grown constantly since September 2021. In this sense, this component’s trend has surprised us favorably, especially when considering high inflation and market volatility that has been seen in tandem with high uncertainty about the global outlook. 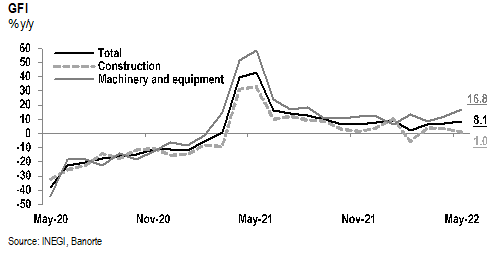 Consumption to keep growing in May, although likely at a very modest pace. The sector could extend sequential gains for an 11th month, although if this materializes it will probably be quite moderate considering a challenging base   –accumulating +8.0% since June 2021 until April– and a more difficult backdrop. Specifically, fundamentals were more mixed, with strength in credit, wages, and remittances –reaching a new historical high– although highlighting a loss of 518.1 thousand jobs, possibly counteracting gains in the other categories. Another negative point is the lack of social programs payments due to the electoral ban, remembering that these were suspended from April to June. Activity data also shows diverse signals. Services within the GDP-proxy (IGAE) fell 0.3% m/m after advancing 1.3% in the previous month, although with six out of nine subsectors higher. Among those down we find retail sales (-2.2%), which contrasted with the 0.5% expansion in their stand-alone report. At the margin, inflation moderated in the period, reaching 7.65% y/y. Nevertheless, pressures continued, centered once again in food. Towards June, signals also seem to be mixed, considering implied performance for activity in 2Q22 GDP, but with an acceleration in inflation, higher COVID-19 contagions, and an additional month without payments from social programs.