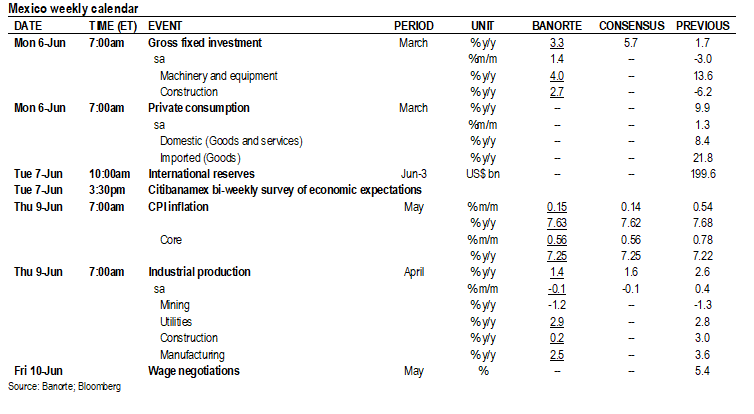 Investment likely stayed somewhat sluggish in March. We expect GFI at 3.3% y/y (previous: 1.7%), with a mixed performance between sectors as economic activity (from the supply side) was modestly higher, according to the monthly GDP-proxy IGAE. With seasonally adjusted data we estimate 1.4% m/m growth, not enough to make up for the -3.0% setback seen in February. Moreover, we have seen higher volatility in sequential terms in recent months.

Specifically, we expect construction at 3.6% m/m (+2.7% y/y), rebounding after last month’s downward surprise. Nevertheless, this would be short of making up for the sizable contraction of 8.2% seen in February. Nonetheless, it would be close to its performance in industrial production, at 3.7%. A positive signal in the latter report was the 4.4% rebound in edification, which we believe is more closely related to the private sector. In turn, civil engineering picked up 1.7%, not ruling out some boost from continued works in the Santa Lucía Airport, among other priority projects of the Federal government. Employment was also favorable as 196.0 thousand posts were added in the period, with total jobs at their highest since May last year and possibly helped also by a better backdrop in terms of COVID-19 cases.

On the other hand, machinery and equipment would contract 4.3% m/m (+4.0% y/y), with a sizable payback from its previous surge (6.7%). This would be concentrated in the imported component (-4.8%), decoupling from capital goods imports within the trade balance (+6.8%) despite being closely correlated historically. In this sense, the latter grew only by 1.7% in February, while imports within GFI surged 12.4% in the same period. Although we are not entirely sure, different accounting methods, inflation and exchange rate volatility, coupled with transportation and other supply-side issues, may help explain these discrepancies. Therefore, we see a meaningful reversal from a challenging base effect. On the other hand, the domestic component may be skewed in the opposite direction, estimated at +0.2% m/m from -2.9% in February. Despite growing at the margin, it should keep lagging imports in their path towards a full recovery. We note that manufacturing activity grew except for transportation, with machinery and equipment also higher, albeit at a more modest pace. On the other hand, business confidence fell across the board, with the ‘adequate moment to invest’ component particularly affected. 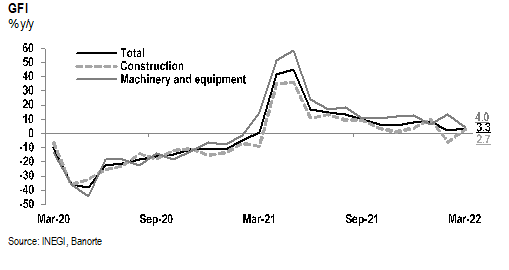 Consumption to keep climbing in March, although likely at a more modest pace. As such, we expect a sequential increase in the period, stringing 9 months of gains. We believe dynamism will continue, bolstered by additional progress on fundamentals, mainly employment –with 566.5 thousand new jobs in the period, but also with strength in remittances and consumer loans. Moreover, we see a positive boost from the early disbursement of resources from social programs ahead of the electoral ban, mainly to the elderly. However, the overall pace might be more modest, considering additional challenges on prices –mainly food–, as well as a challenging base effect, with a 1.3% m/m expansion in the previous month. As such, figures so far have been relatively mixed. Services within the GDP proxy (IGAE) dipped 0.1% m/m, with expansions across several sectors, but mainly dragged by retail sales. Nevertheless, their stand-alone report was much better, showing a 0.4% m/m increase. Finally, non-oil consumption goods imports declined 1.3% sequentially, although likely impacted by the 12.2% expansion in February. Going forward, we believe dynamism could decrease, not ruling out modest sequential declines considering: (1) Prevailing price pressures, with the core component extending higher; (2) the gap left from the early payments of social programs; and (3) additional challenges on supply chains and global activity. Despite of the latter, it is our take that consumption will keep growing and will be a key pillar for GDP in the year.

May’s inflation to remain high, despite positive seasonal factors. We anticipate headline inflation at 0.15% m/m, with the core at +0.56% (contribution: +42bps) and the non-core falling 1.02% (-26bps). The period’s dynamic would be characterized by positive seasonal effects, including summer discounts to electricity tariffs (already seen in the first half), and the Hot Sale discounts in the second fortnight. Nevertheless, we believe pressures in food –particularly processed foods and meat and egg– would offset a large part of this. In addition, considering that tariff provisions in the Plan Against Inflation were enacted until May 17th, their effect on prices will likely not be quite evident. If our estimates materialize, inflation will moderate to 7.63% from 7.68% on average in April. The core would be higher at the margin at 7.25% (previous: 7.22%), reaching a new high since January 2001. Meanwhile, the non-core would decline to 8.77% (previous: 9.07%)

Back to monthly dynamics, within the non-core, energy would fall 3.4% (-35bps), dragged by electricity tariffs (-20.4%; -35bps). In the remaining categories, LP gas would have a modest decline of 0.5% (-1bp), aided by a moderation in international references and with the strengthening of the MXN in the last days of the month. On the contrary, low-grade gasoline would continue climbing (+0.5%; +3bps), despite a larger stimulus to excise tax given prices abroad extending higher. In agricultural goods (+0.7%; +8bps), we anticipate a lower increase in fruits and vegetables, although with meat and egg pressured. The former would climb just 0.1% (+1bp), with our monitoring showing a mixed performance. We note increases in tomatoes, potatoes and avocadoes, although with declines in onions and husk tomatoes, among others. The latter would increase 1.2% (+8bps), anticipating additional increases in eggs and chicken given higher contagions of bird flu in the north of the country and the US. Lastly, government tariffs would be quite modest (0.9%; 0bps), expecting stability given efforts to contain prices and ahead of the June 5th elections.

The core would remain pushed by goods (0.8%; +31bps), with the adjustment centered again in processed foods, up 1.2% (+25bps). In addition to expecting milk remaining on the upside (as already seen in the first half), we believe corn tortillas and other wheat-based items will also show relevant increases. In ‘other goods’ (+0.3%; +6bps), discounts from the Hot Sale, on top of previous sales campaigns, would help limit the category. On services (0.3%; +10bps), we expect mixed dynamics. In ‘others, we expect +0.4% (+7bps). Although tourism-related categories rose in the first fortnight, discounts in the second half would ease some pressures. Nevertheless, categories such as restaurants and dining away from home will likely remain pressured. Finally, housing could accelerate slightly, expecting +0.3% (+4bps).

Industry to take a step back in April. We expect IP at 1.4% y/y. The annual figure for this period is skewed downwards by the timing of the Easter holiday as it happened entirely in April. As such, with seasonally adjusted figures we expect a larger print of 1.8% y/y, which would be lower than INEGI’s estimate in the Timely Indicator of Economic Activity at 2.5%. More importantly and in sequential terms, we expect -0.1% m/m after the 0.4% expansion in the previous month.

We expect a 0.3% rebound in manufacturing (+2.5% y/y), more than compensating for the -0.2% of the previous month. So far, known data for the sector is mixed, although suggesting that the impact from external shocks (e.g. war in Ukraine and lockdowns in China) is still not evident. Overall, IMEF’s manufacturing PMI rose to 52.4pts, up in three out of five categories, while the PMI for the sector in the US accelerated to 59.2pts, quite strong. The trade balance showed conflicting data, with manufacturing exports moderating to -0.1% m/m, dragged by autos (-1.4%). Nevertheless, non-oil intermediate goods imports climbed 3.1%, suggesting that activity may have not been as impacted. Related to the former, auto production reached 251.5 thousand units, translating into a 2.1% m/m contraction (with our in-house seasonal adjustment model). On employment, INEGI’s report showed 9.5 thousand new positions, impacted by the negative seasonality of the period. As such, we believe the sector will remain benefited by the general strength of several categories, although with autos still lagging.

Mining would rebound 0.4% m/m (-1.2% y/y) despite a deceleration both in the oil and non-oil sectors. Part of the uptick would correspond to the adverse base effect in the two previous months, anticipating some stabilization in the ‘related services’ category. Meanwhile, oil output points to a moderation, with production from Pemex falling to 1,767kbpd (previous: 1,777kbdp) and similar in gas. In non-oil, prices adjusted marginally lower, with a sequential decline in exports that hints of a deceleration.

Finally, construction would decline 0.1% m/m (0.2% y/y) after the strong 3.7% increase seen in March. There was a generalized progress in the aggregate trend indicator, but business confidence moved lower. The decline might center in edification, especially in an environment of high prices. Regarding the latter, the construction index within PPI accelerated to 16.3% y/y, representing a hefty barrier for additional dynamism. Meanwhile, public sector works might have moderated marginally after the inauguration of the Felipe Ángeles Airport late last month, which could impact civil engineering. Despite of this, spending in physical investment by the Federal Government accelerated to 20.4% y/y in real terms, possibly still reflecting payments from the latter project.

If we are right, figures would suggest dynamism continued at the beginning of 2Q22. However, we believe risks are greater for the rest of the quarter, with relevant hurdles coming from a more challenging global backdrop. 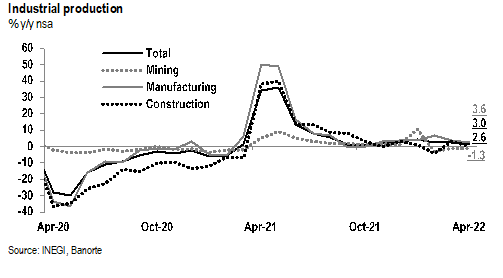