March remittances to accelerate on US economic growth. We expect remittances at US$4,737.4 million, up 14.0% y/y. It is important to note that distortions driven by base effects are likely to be more modest, with inflows surging in the same period of 2020 (+35.1% y/y) because of the start of the pandemic and already seeing payback from this in 2021 (+2.8%). Hence, it is our take that these results will be important to gauge the underlying growth trend in remittances, for which we maintain a positive view.

We expect that US economic and labor market strength keep underpinning good dynamics. In this respect, nonfarm payrolls in the period shoed 471k new posts, with the unemployment rate declining 20bps to 3.6%. This is virtually at the level seen in the first two months of 2020 of 3.5%, before the pandemic. For Hispanics and Latinos, this rate fell by about the same, to 4.2%. In the case of working-age Mexicans –including ‘natives’, ‘non-native citizens’, and ‘non-citizens’ (legal or illegal)–, the total number of people declined for a second consecutive month, down by around 162k. Nevertheless, and similar to February, total employees picked up, reaching a new historical high of almost 17.5 million. Coupled with less unemployed workers, the unemployment rate dropped by 96bps to 4.32%, according to our calculations. This matched the level in year-end 2019 and suggests a “hot” market. In turn, it has been supported by economic activity, with available data suggesting that growth remain strong. For example, both the ISM manufacturing and services indices went up further, while hard data such as retail sales and industrial production grew sequentially.

Our main concern is the inflation outlook, especially as energy prices have surged due to the war in Ukraine. Meanwhile, housing prices keep climbing at a strong pace (close to 20% according to the S&P CoreLogic Case-Shiller index). Coupled with higher interest rates and no additional stimulus, these factors represent important risks for dynamism given its impact on real incomes. So far, evidence of this remains scant, possibly also because of wage gains that help to compensate for higher utility bills, at least for now. Lastly, we are following closely developments on migration, with tensions rising significantly in recent months and poised to remain as a very contentious issue at least until the US mid-term elections in November. 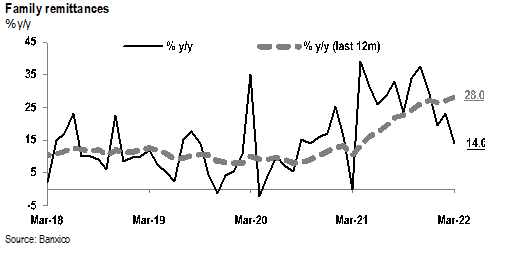 Banxico’s survey of economic expectations. As usual, focus will be on inflation, growth, reference rate, and exchange rate forecasts. On prices, the year-end 2022 median is at 5.5%, lower than our 6.7%. Given that pressures continue unabated, we do not rule out additional increases in short-term estimates. Meanwhile, we do not see substantial changes in medium and long-term expectations, remaining above target. On GDP, the 2022 estimate is at 1.8% (Banorte: 2.1%), possibly unchanged as they will not incorporate the latest release, in which activity rose 0.9% q/q in 1Q22. On the reference rate, the end of the year is seen at 8.00%, below our 8.25%. Considering adjustments in private sector surveys amid a more challenging backdrop, we expect it to climb again. Lastly, the exchange rate stands at USD/MXN 21.31 (Banorte: 21.30), still not anticipating large changes.

IMEF indicators to continue with their recovery, accumulating three consecutive months in expansion. We believe the manufacturing sector should remain driven by favorable external demand conditions, despite some adverse events in the period. On the other hand, the non-manufacturing sector could benefit from the reactivation of domestic activity, although limited by the extension of price pressures.

We anticipate manufacturing at 52.6pts from 52.3pts in March. As we already mentioned, most of the impulse would come from dynamism in the US. In this sense, Markit’s PMI for that country was positive by increasing 0.9pts to 59.7pts its best level in seven months. Inside, operating conditions kept increasing, with significant increases in ‘new orders’ and ‘production’. However, we expect the increase to be more limited in Mexico, impacted by: (1) The possibility of delays in production due to the lack of imported inputs coming from China, given strict lockdowns in that country; and (2) the imposition of strict scrutiny on cross-border transportation in Texas due to the executive decision from Governor Greg Abbott. On this regard, although the order only lasted a week in the middle of the month, facing strong criticism from companies in both countries, we believe that the impact could have extended to the following weeks. In addition, other problems such as the lack of semiconductors continued, resulting in additional stoppages in some auto assembly plants and limiting further growth. To this we must add the risks of growing price pressures, which have increased the costs of inputs and transportation, which may impact production. As such, although we expect gains in ‘new orders’ and ‘production’ at the local level, we do not rule out more volatility in logistics’ categories (‘deliveries’ and ‘inventories’).

On the other hand, non-manufacturing could improve to 53.0pts from 52.8pts, with a more modest increase. At the margin, we expect stable epidemiological conditions to contribute to a greater reactivation in activity, especially in services. Similarly, progress on fundamentals in previous months could contribute to greater dynamism, especially considering advances in employment and credit. Anecdotally, reports of increased in-person work have continued, which we believe will continue to support related services, with a possible spillover in other categories. However, there are various headwinds that we believe could have limited the growth trend. The main one continues to be inflationary pressures, with evidence of additional increases in important items, such as food, in the first half of the month.

We believe that, if this persists and households have to assign more of their resources to these goods, dynamism of other categories could be compromised. In addition, it will be important to confirm whether the loss of jobs in this sector in March is due to a seasonal factor or if it corresponds to an adverse impact on activity. To this we must add the possible effect of spending patterns of resources from social programs, bearing in mind that the payments were delivered in February and March, and will not be paid again until after the elections on June 5th. 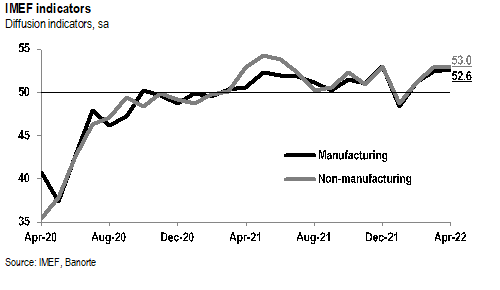 Consumer confidence modestly higher in April. We expect confidence at 44.2pts (seasonally adjusted), higher than the 43.9pts in March. The increase would be mainly associated with better political sentiment because of two factors: (1) The inauguration of the Felipe Ángeles International Airport at the end of March; and (2) the recall consultation of President López Obrador. In addition, we must remember that the second point resulted in payments of social programs being brought forward to the previous two months, which may have also aided sentiment. This comes on top of better virus conditions, which could also help current conditions components. Nevertheless, the extension of price pressures  –with a new upward surprise in the first half of the month– will probably keep weighing on purchasing power. In addition, financial market volatility, including in the exchange rate, could also be perceived as negative. As such, we consider that the indicator will keep moving higher, albeit with a more modest growth pace. 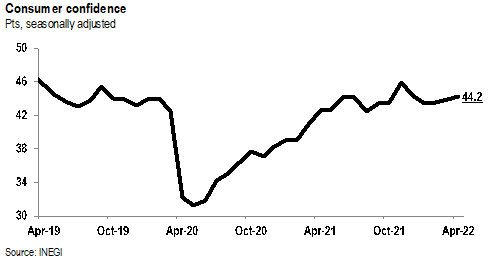 Investment setback likely in February after its recent run. We expect GFI at 1.8% y/y (previous: 8.6%), moderating after last month’s sizable upward surprise and limited by muted economic activity, with the GDP-proxy IGAE stalled at 0.0% m/m. More importantly, with seasonal-adjusted data it would translate into a 3.0% m/m contraction, its first decline since September last year.

This would be driven mainly by construction, estimated to fall 6.3% m/m (-2.5% y/y). It would also be weaker than the sector’s performance in industrial production at -1.5%, albeit with a more difficult base effect as it surged 4.8% in January. In this respect, we see both residential and non-residential negative, but with the latter more impacted after unusual strength in the previous month. The acceleration in spending and works of federal government projects such as the Felipe Angeles Airport may explain some of this. Nevertheless, we also noted very strong adjustments in services related to mining within IP. Specifically, these declined 22.4% y/y after surging 68.3% previously. This may well have to do with rigs in oil platforms, which is accounted for as construction in GFI. Hence, we see a potentially sizable payback from this category. Despite this volatility, we believe deep challenges remain for this sector.

For machinery and equipment, we expect a 2.9% m/m rebound (+8.4% y/y). There would be meaningful differences between sectors, with base effects still influencing significantly. The domestic component would backtrack 3.4% after surging in the past couple of months. In our view, this may also be related to public spending in flagship projects. Nevertheless, the main driver would be transportation equipment, with production figures suggesting weakness in autos after two very positive months. We believe this reflects that issues with inventory management remain in place, with higher volatility in monthly data. On the contrary, imports would rebound 4.7%. In this respect, capital goods imports within the trade balance picked up 0.6% after retracing 0.4% previously. Distortions are high, as the imported component in January plunged 7.1%. The average exchange rate was stable at 20.45 per dollar, with volatility increasing only late in the period because of the war in Ukraine. Hence, the effect from this should be modest, although in our view poised to be stronger given developments in global markets and the growth outlook since then. 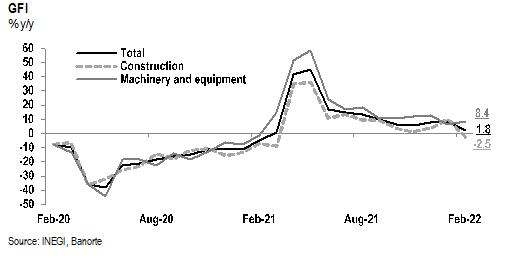 Consumption will maintain its positive trend in February. As such, we expect a sequential increase in the period, stringing 8 months of gains –with an average growth rate of 0.6% m/m–. We believe that dynamism will continue, although likely at a more modest rate. The latter, we think would happen due to two factors: (1) The persistence of inflationary pressures; and (2) a more challenging base effect given previous gains. Nevertheless, the positive performance would be justified by improvements in fundamentals, highlighting a recovery in employment, strength in remittances, and better signals from consumer loans. On top of this, we believe that some figures in the period also reflect favorable conditions for private consumption. Services within the GDP-proxy IGAE showed a favorable trend, including retail sales (also seen in their stand-alone report), matching an improvement in virus conditions after experiencing the worst of the wave in January. Meanwhile, non-oil consumption goods imports added a seventh month higher, albeit still very likely skewed by higher prices. Although in the short-term we expect dynamism to continue, risks toward 2Q22 are increasing, which could result in lower dynamism from consumption. Among them we highlight an acceleration in inflationary pressures in some sectors, such as food and energy, as well as possible supply shocks related to disruptions on production processes. However, we believe other positive factors could partly offset part of this impact.