We expect inflationary pressures to extend in November 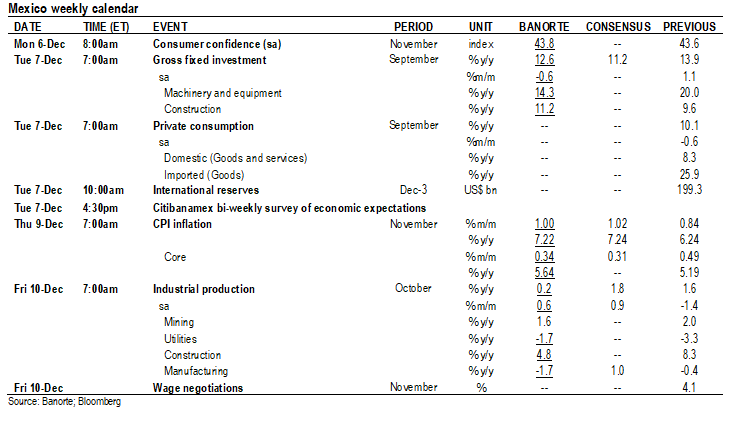 Consumer confidence to extend higher in November. We expect confidence at 43.8pts (seasonally adjusted), better than the 43.6pts from October. Similar to the previous month, we expect progress on the pandemic to explain most of the increase, with cases trending lower while the ‘traffic light’ indicator reached its best levels since it was introduced. As such, mobility has kept climbing, surpassing pre-pandemic levels. Nevertheless, we expect several adverse factors to drag optimism, noting: (1) Continued price pressures, especially in foods (both processed foods and fresh fruits) and despite a breather in energy, as seen in the inflation report for the first half of the month; and (2) the depreciation of the Mexican peso, averaging USD/MXN 20.61 in the first 20 days of the month (during the survey sampling period) from 20.46 in the previous month, albeit with a sharp increase in the latter part of the month. 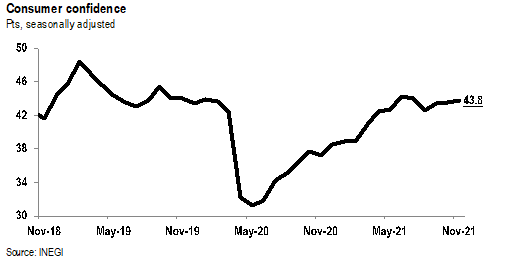 Investment likely weaker in September as activity lost steam. We expect GFI at 12.6% y/y (previous: 13.9%). Sequentially, we estimate a 0.6% contraction after two consecutive months higher. In our view, higher COVID-19 cases, supply chain issues and price pressures took a toll on performance. In this sense, the GDP-monthly proxy IGAE showed the economy fell further, with weakness especially in industry. It is our take this situation will be also be clearly reflected in this component of aggregate demand.

By sector, we see construction at -1.8% m/m (11.2% y/y). This would come after recent gains in both components. We believe that a more sizable contraction is likely in the residential sector, with the IP report signaling a drag from edification. In turn, civil engineering, likely more related to non-residential investment, may continue showing some resilience on government spending. Apart from the factors above that have raised uncertainty levels, we believe higher raw material prices –including industrial commodities– have also taken a toll on project costs and expected profitability. Business confidence for the period strengthened at the margin, including the ‘adequate moment to invest’ component, a situation that may help dampen some of the retracement.

Machinery and equipment would decline 0.5% m/m (14.3% y/y), extending the weakness observed in August. This would be mainly in the domestic component (-1.4% m/m), in turn mainly affected by the auto sector.

Specifically, transportation was very weak according to industrial production at -8.8% m/m. Trade data was better, although we fade out this because of disruptions and higher delay times that have occurred because of supply chain problems, as well as likely distortions because of higher inflation. Moreover, sectors such as electric and electronic components, as well as computers, also had a downbeat performance. Hence, semiconductors and inventory management may well explain this situation. Other subsectors were stronger, with overall machinery and equipment up 1.9% after falling 1.1% in the previous month. The imported component would be better, at 1.0%. Base effects are more challenging here as trade recovered more rapidly last year. Nevertheless, capital goods imports strengthened sequentially, with higher volatility in the data possible because of bottlenecks. The exchange rate was quite stable despite concerns about the rise in COVID-19 cases, with a more meaningful depreciation until October and November.

We continue seeing relevant headwinds for a sizable move higher in investment. High uncertainty remains in place because of the evolution of the virus –including the ‘Omicron’ variant– and unsolved issues in supply chains. To the latter we must add higher input prices, including key raw materials and energy. Overall, investment is likely to keep lagging other components of domestic demand going into next year, limiting GDP growth. 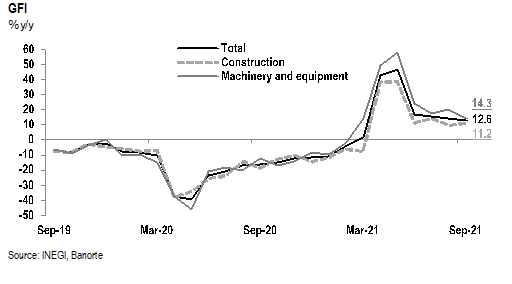 Private consumption to rebound modestly in September. Similar to other indicators, we anticipate an additional moderation in the annual rate (previous: 10.1% y/y) as the base effects become more challenging. In sequential terms, signals are quite mixed, suggesting that at best we might see a modest uptick after a 0.6% m/m contraction in the previous month. However, we do not rule out an additional decline. In this sense, fundamentals are mixed, with remittances still quite high –albeit losing some dynamism–,and additional employment losses, but with an apparent improvement in consumer loans. On the positive side, retail sales edged-up 0.2% m/m, albeit with an uneven performance inside. Non-oil consumption goods imports rebounded 1.1% m/m –accelerating further in October to 3.2%– after a three-month slide. On the contrary, services within the GDP-proxy fell 0.3%, with weakness centered in two sectors. Price pressures remained high in the month, likely dampening purchasing power. Going forward, the outlook seems to have improved based on the latest employment and activity prints, supporting our call for a rebound in 4Q21.

Seasonal factors among other trends driving inflation in November. We expect headline inflation at 1.00% m/m (previous: 0.84%), with additional price pressures in top of those seen in the first half of the month. The core is estimated at 0.34% (contribution: 26bps), with a somewhat low print as some categories were benefited by El Buen Fin discounts (Mexico’s Black Friday) earlier in the period, despite some additional pressures in some items. Meanwhile, the non-core would expand 2.94% (+74bps), with adverse seasonality from the end of summer discounts on electricity tariffs and pressures in fruits and vegetables. With these results, annual inflation would accelerate to 7.22% (previous: 6.24%), highest since early 2001. Both the core and non-core would also be higher, standing at 5.64% and 12.06%, respectively.

On monthly dynamics, part of the increase in the non-core would be concentrated in energy, up 3.8% (+38bps). The bulk of the hike comes from the end of the summer discounts in electricity in the remaining regions of the country. As already known, this increase amounted to 24.2% (+41bps). On the contrary, there would be some relief in LP gas, lower by 0.8% (-2bps), driven by lower reference prices abroad, despite an overall depreciation of the MXN. Gasolines would be more stable, with the low-grade fuel at -0.1% (-1bp), also helped by decreasing international prices, also benefited by a slight increase in the subsidy to excise taxes vs. October. Meanwhile, agricultural goods would spike 3.2% (+35bps), with fruits and vegetables up 5.7% (+29bps). Most of the expansion would have already been seen in 1st half, albeit with signs of additional pressures in goods such as tomatoes, husk tomatoes and chilies. However, these would be partly offset by declines in potatoes and onions. Meat and egg would be more modest (+1.1%; 6bps), with signs of pressures in chicken moderating in the second fortnight of the month. Lastly, government tariffs would remain quite muted at 0.1%.

At the core, dynamics are mixed. Goods are estimated at 0.3% (+11bps), with a sharp difference inside. Processed foods would remain highly pressured (+0.5%; +11bps), climbing further as costs keep mounting. Just to name a few, as corn has kept increasing, we have seen adjustments in derivatives such as tortillas and oil. Meanwhile, ‘other’ would be much more moderate (0.0%; +1bp), with the rollback from discounts occurring in the second half of the period. Nevertheless, as discounts were modest vs. our forecast, we expect the rebound to also be relatively subtle. Services would be somewhat pressured, up 0.4% (+15bps). The uptick would be centered in ‘other’ (0.6%; +12bps), as we saw increases across the board, including tourism-related categories. Meanwhile, housing would accelerate slightly, climbing 0.2% (+4bps) and at its highest since early 2020.

Industry to rebound modestly in October. We expect a 0.2% y/y increase, lower than September’s 1.6%. The favorable base effect keeps dissipating as industry bounced back faster than services once the reopening started. The period has one less one working day in the annual comparison. As such, using seasonally adjusted figures activity would expand 1.2%, weaker than the +1.7% forecast within INEGI’s Timely Indicator of Economic Activity. More importantly, in sequential terms we anticipate a 0.6% m/m rebound, modest after the 1.4% contraction seen in the previous month.

Part of the uptick would be driven by manufacturing, up 0.4% m/m (-1.7% y/y). Despite of this, challenges continue plaguing the sector, still at the mercy of supply disruptions. In this context, auto production from AMIA came in at 257.8 thousand vehicles, which translates into a 9.0% m/m expansion using our in-house seasonal adjustment model. This coincides with less reports of stoppages in auto plants relative to previous months. In addition, IMEF’s manufacturing PMI accelerated to 50.7pts, up 0.8pts. This is supported by positive dynamics in the US, as manufacturing output rose 1.2% m/m after a 0.7% decline, with a relevant boost from autos and a rebound after issues following hurricane Ida. On the contrary, manufacturing exports within the trade balance fell 1.4% m/m. However, we are starting to see signals of a lag between these and IP, which could be related to bottlenecks. Also negative, employment according to INEGI fell by 92.3 thousand, contrasting with IMSS’ +22.1 thousand positions.

Mining would also be positive, up 0.5% m/m (1.6% y/y). The oil sector should remain broadly stable, as suggested by output figures. According to the CNH, oil extraction stood at 1,651kbpd, slightly below the 1,666kbpd seen in September, while gas figures showed a similar trend. Non-oil could be more dynamic, boosted by an additional increase in prices, especially silver and copper. This comes on top of favorable export data, with a large sequential uptick –albeit likely skewed up as these figures are measured in nominal terms–.

Lastly, construction likely extended its decline, to -0.4% m/m (+4.8% y/y) after  -1.4% in September. However, this would not be enough to offset accumulated gains in July-August. Signals from the sector are mixed. Business confidence kept climbing across all components, with the aggregate trend indicator doing just the opposite in all categories. However, we still maintain some caution about both, as they have failed to capture short-term adjustments while predicting the overall trend more accurately. We are also concerned about cost increases, with several companies saying that it affects project development. On ‘harder’ data, physical investment by the Federal Government moderated to 11.2% y/y in real terms vs. 20.4% in the previous month. Lastly, and favorable at the margin, INEGI reports jobs up by 7.9 thousand, with IMSS even better at +24.7 thousand. 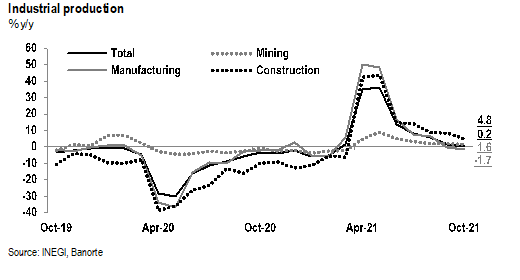