Inflation in 1H-September estimated at 0.29% 2w/2w, with pressures at the non-core

Aggregate demand in 2Q21 to surge given the accumulated recovery since strict lockdowns. We expect both aggregate supply and demand to expand 25.8% y/y, sharply higher than the -2.9% of the previous quarter. Annual figures will shoot upwards on base effects due to strict lockdowns in April and May last year, which led to an unprecedented deceleration of the economy. Considering the accumulated recovery, we now see large expansions. Moreover, and favorable sequentially, daily cases of COVID-19 fell relative to the previous quarter, allowing for a broader reopening and helped boost consumer and business confidence. In this respect, we see a better sequential performance in the quarter.

On the supply side and as already published, GDP expanded 19.6% y/y, with sequential improvements in the main three categories, with strength centered on services. Meanwhile, we expect imports at 45.2%. Timely data points to an additional acceleration in the quarter, in our view related to a better-than-expected performance in domestic demand. Measured in USD at current prices, inbound shipments in the trade balance –which only considers goods– grew 61.0%, with the current account –also including services– close to 61.7%. Nevertheless, when considering MXN strength (appreciating 14.3%), this exuberance loses some steam, standing at 38.2% and 38.6%, respectively. This is even lower when factoring in inflation, as this indicator is measured in real value-added terms.

In demand, available figures show higher dynamism relative to our former expectations, both in external and domestic sectors. Specifically, we anticipate exports at 49.1%. This is supported by flows data, similar to imports, with the trade balance up 44.1% in MXN and current account slightly higher, at 47.6%. The main driver has been the US, with a significant push from both fiscal and monetary stimulus measures. On the contrary, trade flows have been affected by supply chain issues (e.g. lack of semiconductors affecting autos, high shipping costs, scarcity of containers, unusual maritime traffic, etc.), limiting growth.

Domestically, consumption’s monthly indicator grew 24.4% y/y. We saw a relevant acceleration in April and May, consistent with the reopening and higher mobility. Nevertheless, June showed a sizeable decline, likely on: (1) A more challenging base effect after accumulated gains in previous months; (2) purchasing power losses stemming from high inflation, particularly in food and energy items; and (3) an initial impact from the deterioration of epidemiological conditions. Despite some methodological differences between aggregate demand and the first indicator –especially in services–, we expect a 24.4% expansion. In investment, the monthly indicator came in at 34.5% y/y (same link above), also expecting the print in aggregate demand at the same level. Performance was rather lackluster, with ups and downs in construction and some prevailing weakness in machinery and equipment. Finally, we expect -2.5% in government spending, with federal public finance indicators showing a similar trend, as current spending fell 8.9% y/y in real terms.

We point to at least two adverse effects in the annual comparison: (1) Spending on several social programs (including those based on direct transfers), among others, were brought forward to 1Q21 by the Federal government to comply with electoral rules, which may have distorted figures; and (2) spending was boosted in the same period of 2020 given the initial shock from the pandemic.

We maintain our full-year GDP forecast at 6.2%, expecting growth to continue at a slower pace in the second half. Moreover, we see modest downside risks given most recent data, especially those related to domestic demand. Lastly, lingering concerns remain on manufacturing given persistent supply chain issues, as well as some soft signals for mining and construction. 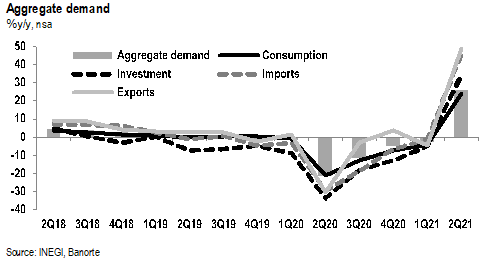 We highlight complicated dynamics at the non-core, mainly in agricultural goods (0.9%). Specifically, we anticipate a 1.7% increase in fresh fruits and vegetables, with our monitor showing relevant moves higher in tomatoes and onions, and to a lesser extent, chilies. Drought conditions in our country have improved notably, although in the US remain harsh. We also do not rule out an impact from hurricanes in the period, particularly Nora in the Pacific and Grace in the Atlantic. Meat and egg would pick up 0.2% with mixed changes, seeing higher prices for beef but declines in chicken and eggs. In energy, we expect a renewed increase in LP gas (+1.1%, contribution: 2.4bps) as the global backdrop for this good remains complicated and the average maximum price grew 2.4% in the period. Gasolines would be more stable.

At the core, we estimate both goods and services higher by 0.2%. In the former, we anticipate processed foods adding 4.5bps, which would be low relative to its most recent performance. Specifically, we noted the stabilization in corn tortilla prices and signs of an adjustment lower in milk. Moreover, there were some news that cost pressures waned somewhat after the recent decline in the price of LP gas; on the contrary, commodity prices (used in packaging, such as aluminum) stayed high. We will look to both, although with special focus on the potential effect from gas on other components. We expect other goods at 0.3%, seasonally high because of students returning to school, which could be boosted further by the return to in-person classes in some cases. This would affect school attires and other related items. Related to this, we also see an increase of 1.7% in tuitions within services. In other categories, we expect lower prices in airfares (-1.4%) and tourism-related services (-0.3%) because of the end of summer vacations, although much more modest in magnitude.

Going forward, we will keep paying close attention to the evolution of commodity prices –given added pressures in international markets– as well as supply restrictions because of their potential second-round effects in other goods and services. In turn, we think the pandemic is still influencing price dynamics, particularly with signals of higher caution among consumers that suggest some weakness in domestic demand, and even with mobility levels remaining quite strong so far.

Retail sales limited by pandemic cautiousness in July. We expect an 11.6% y/y increase (previous: 17.7%), still influenced by the base effect but also as there was one less working day in the annual comparison. Using seasonally adjusted figures we estimate +0.2% m/m. Although positive, it would be limited when factoring in the -0.6% registered in June. In this respect, available data for the month was mostly weak, albeit with consumption fundamentals staying strong. In our view, consumers may have been more cautious due to the rise in COVID-19 cases, refraining from spending more freely because of this situation.

In this respect, consumer confidence fell meaningfully for the first time since November 2020. This was mainly driven by expectations components –both for households and the country–, with the move lower extended through August. Auto sales reached their lowest levels since the beginning of the year, with the annual rate moderating to 12.7% from 38.5% in June.

Nevertheless, these are likely to have been affected also by production constraints, in turn reflected in higher prices. On the other hand, mobility levels were broadly stable, while volumes of gasoline sold showed a modest sequential uptick. Overall, we believe these are consistent with more prudence.

Total sales by ANTAD members decelerated, up 10.6% y/y in real terms (previous: 16.3%). Nevertheless, base effects are also very important here. On the details, supermarkets and specialized stores were stronger, with departmental stores dragging the headline. Annual inflation was broadly stable at 5.88% (June: 5.81%), although essential categories (e.g. processed foods, agricultural goods) and LP gas prices remained very pressured. In our view, this may be dampening overall performance, particularly considering gains in consumption fundamentals. Among them, job creation was quite strong, while remittances reached a new record in the period. Moreover, banking credit to consumers was also better with the exception of durable goods.

We maintain our call that the recovery in consumption will continue. Nevertheless, recent data suggests increased caution. Specifically, we may be observing the first signals of a more protracted slowdown in domestic demand. If this continues it may well increase downside risks for our view of GDP growth of 6.2% and 3.0% this year and next. Therefore, added vigilance of short-term data is necessary to assess potential changes to the outlook. 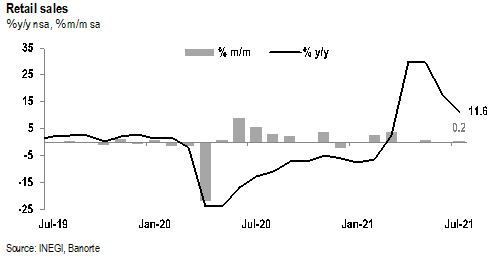