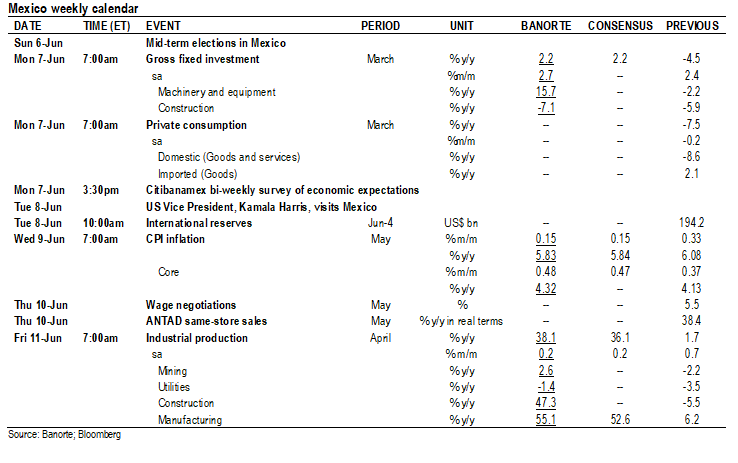 Largest mid-term elections in history. This Sunday, June 6th, mid-term elections will be carried out in Mexico. In total, 20,446 positions are up for grabs, both at the federal and local levels. In the former, the whole 500 seats of the Lower House will be renovated, remembering that 300 positions are based on the outcome of districts’ voting, while 200 are assigned by proportional representation. These deputies will start once the ordinary legislative period begins on September 1st.

After Election Day, the National Electoral Institute (INE in Spanish) and state institutes will begin two exercises to present results: (1) Fast counting; and (2) the Preliminary Electoral Results Program (PREP in Spanish). The first one is a statistical procedure that estimates trends of overall results the same night of the election. This will be released only for the Lower House and all governorships. Meanwhile, the second adds data from official results at each polling station. Nevertheless, these are not the official results, which will come from District Accounts, which start on June 9th and finish on June 13th.

Investment to continue gathering steam in March. We expect GFI at 2.2% y/y, higher than the -4.5% seen in February. However, this is distorted by several factors, including calendar effects (the start of the Easter holiday and one more working day in the annual comparison) as well as the first shocks from the pandemic. In this regard, sequential data becomes more important to isolate for them, forecasting 2.7% m/m growth, adding three months of strong expansions.

We estimate construction at -7.1% y/y (-0.1% m/m), which would be below figures in the industrial production report. The most relevant difference is that production was boosted by ‘specialized services’, which are not accounted for in investment. Moreover, we saw a larger deceleration in edification –which correlates more with the residential sector–, compensating for a good result in civil engineering. About the latter, physical investment by the Federal Government was up 17.2% y/y in real terms.

Meanwhile, machinery and equipment would grow 15.7% y/y, reflecting the effects of the pandemic more clearly. Inside, the imported component would lift the sector, at 26.4% (+5.4% m/m). In this sense, capital goods imports were very high, at 30.5%. Although there is a very relevant distortion from the base effect, it also suggests optimism that has not been seen for a long period. The domestic sector would rise 0.4% (4.4% m/m), with rebound in some key components in manufacturing after adverse shocks in February from blackouts and the undersupply of natural gas.

We think the outlook for investment may be improving at the margin, supported by the economic recovery, especially because of the acceleration in the US. Nevertheless, several risks prevail, including some of idiosyncratic nature. We think these will keep affecting investment, which will continue lagging relative to both international trade and private consumption. 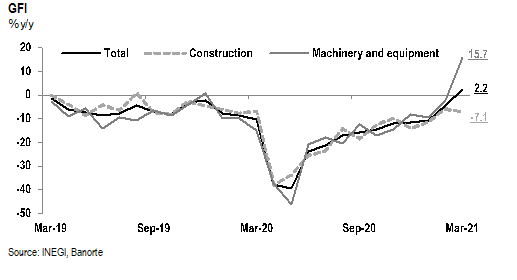 Private consumption to rebound in March. In our opinion, February was somewhat modest by declining 0.2% m/m (-7.5% y/y). However, we must remember that during the first half of the month we saw a significant deterioration in the ‘traffic light indicator’, which we believe had a substantial effect on performance. After this, we expect a recovery in March, boosted by: (1) A considerable improvement in conditions surrounding the virus; (2) the restart of job creation after some distortions at the start of the year; and (3) pent-up demand in previous months. This would be supported by performance in some timely indicators. Specifically, retail sales rose 3.6% m/m, with a renewed dynamism in non-essential sectors, consistent with advanced figures from ANTAD. Moreover, services within the GDP-proxy (IGAE) were also very strong, up 3.1% with increases in all sectors. Considering this, we could see a relatively vigorous print for the month, the possibility of additional gains in April and May on a more favorable backdrop.

Monthly inflation relatively high on an adverse performance across sectors. We expect headline inflation at 0.15% m/m, (previous: 0.33%), quite high considering seasonal trends for the period. The core component would rise 0.48%, contributing 36bps. On the contrary, non-core would decline 0.85%, subtracting 21bps. The latter would be explained by summer discounts on electricity tariffs, which is already known, subtracting 38bps. However, this would be partly offset by higher prices in agricultural goods, with remaining energy categories mostly stable. In particular, the first ones would climb 1.7% (+18bps), mostly in fresh fruits and vegetables (+11bps), but also meat and egg (+6bps). Performance beween fortnights would be differentiated, with a large expansion in the first half partly offset by modest declines in the second. In this context, our monitoring suggests some correction lower in tomatoes, avocadoes, chilies, chicken and eggs. This is somewhat consistent with latest weather reports, suggesting a slight improvement on droughts, albeit still with a relevant deterioration when compared to previous years. On the remainder of energy, LP gas would fall 1.1% (-3bps), mostly aided by the performance of the MXN as it gained around 0.3% m/m, along a normalization in market conditions. On gasoline, low-grade would climb just 0.2% (+1bp), with some decreases on reference prices in the second half of the month and a higher subsidy, averaging $1.84 per liter in the period. High-grade would be steeper at 0.5%, still catching-up to pre-pandemic spreads.

At the core, the brunt of the contribution would be from goods at 0.5% (+22bps). Processed foods would remain high (0.7%; +15bps), influenced by key items –such as corn tortillas– on input cost pressures, along other passthrough effects (e.g. energy, FX). In other goods, Hot Sale discounts in the second fortnight would offset some of the increase at the beginning of the period, for a monthly expansion of 0.3% (+7bps). Turning to services, pressures would still be more subdued, albeit gathering some pace at 0.4% (+14bps) as mobility picks up. Stability would come from housing (0.2%; +3bps), with other services higher at 0.7% (+11bps). Tourism-related services would probably remain higher after the Easter holiday, along a recovery in demand as COVID-19 conditions improve. In addition, passthrough pressures would continue to build-up in other categories, such as dining away from home and restaurants.

If our forecast materializes, annual inflation would stand at 5.83% from 6.08% in April, with a downward trend in coming months as the base effect becomes less challenging. In a similar fashion, the non-core would fall to 10.65% from 12.34%. On the contrary, the core would rise to 4.32% from 4.13%, with mixed shocks because of the pandemic.

Industry should stay positive in April. Annual rates will be heavily skewed to the upside this month and in May, as strict lockdowns brought economic activity practically to a halt in the same periods last year. This means that base effects will be very favorable. As a result, we forecast a 38.1% y/y expansion, which would be a new high in the historical series (since 1993). This should be concentrated in construction and manufacturing, which were not ‘essential activities’ until June 2020. In contrast, mining (particularly oil) and utilities kept operating. More important considering the skew, we expect industry to extend the recovery in sequential terms, up 0.2% m/m and stringing 11 consecutive positive months. According to our calculations, this is better than implied by the Timely Indicator of Economic Activity.

By sectors, we expect manufacturing to lead higher, up 0.5% m/m (+55.1% y/y) even after rebounding 3.0% in March. Available data remains positive, with dynamism despite supply-chain issues worldwide that may be dampening growth. Specifically, the sector in the US grew 0.7% m/m, with companies still talking about very high demand that is increasingly difficult to accommodate. This is likely benefiting Mexico, as flagged by IMEF’s manufacturing which stayed in expansion at 51.6pts, while extending the move higher in May. Nevertheless, the ‘production’ component corrected lower, suggesting more modest gains. The sector’s job creation associated to IMSS was also strong at 16,567 new posts, while intermediate goods imports –closely related to the production process– also advanced sequentially. Lastly, the auto sector clearly shows the distortions of the pandemic, with production up a whopping 7,132% y/y at 269,180 vehicles, when one year ago it grinded to a halt, at only 3,722. Notwithstanding this, automakers are still facing a difficult backdrop, with most announcing temporary stoppages in recent months due to undersupply of key components (e.g. semiconductors), among other issues.

In construction, we estimate +0.3% m/m (47.3% y/y). INEGI’s aggregate trend indicator has been moving higher for almost one year, reaching its best level since September 2018. Similar dynamics were observed in business confidence, particularly in current conditions, with the sector also adding new jobs. Public finance figures on physical investments fell 2.6% y/y in real terms. Nevertheless, this could be skewed as some support programs to fight the pandemic in 2020 were reflected in this line. We will also pay attention to subsectors, particularly ‘edification’, likely more closely related to the private sector.

Lastly, we estimate mining at -0.6% m/m (+2.6% y/y). According to the CNH, oil production stood at 1,695kbpd, slightly lower than the previous month. Moreover, gas production was also weaker. In contrast to the abovementioned sectors, Pemex’s operations were catalogued as ‘essential’ since the pandemic broke. Hence, the base effect in non-oil mining is much more favorable, albeit trade data suggests a deceleration.

Going forward, we still see structural challenges for growth, warning also that weather conditions may be even more disruptive during the hurricane season if we judge by the problems already seen this year (e.g. cold weather in the US, droughts in our country).

Looking ahead, we maintain a positive view on industry for the rest of the year despite lingering risks. These are mostly due to supply constraints and bottlenecks, which may be increasingly felt in higher prices. Nevertheless, the demand outlook remains vigorous, especially from the US. A better-than-expected domestic recovery, along some pent-up demand because of lower uncertainty (helped by better COVID-19 dynamics) may also be of additional help. 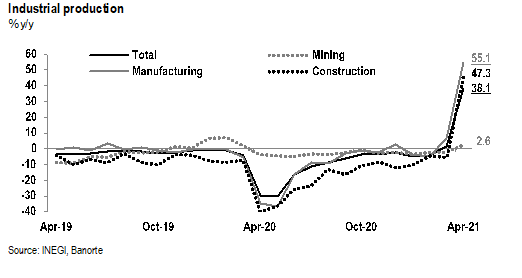