Aggregate supply and demand moderated marginally in 1Q22. These grew 2.9% y/y, less than the previous quarter (3.0%) and below our forecast (3.4%). In this respect, the annual rate fell at the margin with a more complicated base effect, albeit in said period staying negative due to the pandemic’s impact. In the supply side, GDP grew 1.8% y/y. In this backdrop, imports rose 5.8%, slowing down in both goods (5.3%) and services (19.4%), as shown in Table 1. From the demand side, we believe the latter was reflected mainly in private consumption (7.2%), but also on investment, which increased 5.6% (Chart 3). Exports advanced 10.1% (Chart 4), with services +73.4% still much higher than goods +7.2%. After the weakness observed in 2H22, the economy improved on the back of higher mobility despite a new high in daily cases by mid-January because of Omicron, which in turn, we think had a more muted impact. Despite higher worker absenteeism, employment returned to its recovery trend in the period.

Sequentially better on the back of consumption. Aggregate supply and demand picked up 1.2% q/q, better than the 0.3% seen in 4Q21, which in turn was revised upwards from +0.15% (Table 2). We especially note the 3.4% growth in consumption after the +1.4% of the previous period. The surprise is also positive given a high inflation environment. In this sense, total wages kept growing in real terms despite these headwinds. To the latter, we should add other positive drivers, such as remittances growth and stronger banking credit. We also highlight services (3.7%), probably associated with sectors such as entertainment and lodging. On the other hand, the imported component picked up 6.3% –despite continuing supply chain problems–, still higher than the domestic one (Chart 5).

On the other hand, and in contrast with recent results, investment improved to 2.2%. Both the public (1.4%) and private sector (2.5%) supported this. In the former, it is likely associated with higher spending in key projects by the Federal Government, especially the Felipe Ángeles Airport, inaugurated by mid-March (Chart 6). Government spending was positive at the margin (see Chart 7), albeit not enough to make up for accumulated losses in 2H22.

With this, domestic absorption (comprised of these three categories) grew 2.8% according to our calculations, its highest pace since year-end 2020.

On the supply side, imports grew 2.5% (Chart 8). Although we were already quite optimistic about their dynamics, the result was below our expectations. In our view, risks ahead could be concentrated in this component –as well as in exports, where we should mention that strict lockdowns because of COVID-19 in China accelerated by the end of March and early April. Nevertheless, trade balance figures until the latter month did not suggest a meaningful impact. We think challenges in terms of inventory management remain as a headwind. To this, we must add heightened recession fears in the US and USD strength. Lastly, and as already reported, GDP grew 1.0% after weak results in 2H22.

Likely moderation due to the prevalence of headwinds in 2Q22. Although today’s result supports our 2022 GDP forecast of 2.1%, the outlook for the second quarter is more challenging, with a deteriorated balance of risks. The prevalence of inflationary pressures both at the local and global levels continues to be the main limitation for economic activity, adding to the challenges consequent from shocks to supply chains and other distortions of the virus.

At an international level, the disruptions caused by the lengthening of the war in Ukraine keep translating into high commodity prices –especially energy– and supplies in general. Additional pressures are derived from the closure of ports and factories in China that imply higher transportation costs and volatility in inventories, as well as general disruptions in production. On the supply side, this translates into a more complicated environment for imports, as mentioned previously. Further ahead, this have permeated the IMEF’s manufacturing PMI, which moderated its rate of expansion in May and was biased downwards in all its components. Although these factors show signs of deterioration, we believe the behavior of imports could continue showing some resiliency, only moderating the pace of expansion, and still helped by the current slack in terms of the recovery. Lastly, we remain cautious about the increased perception of the likelihood of a recession in the US, which, if it materializes, will add additional pressures domestically, impacting exports and industrial activity.

Locally, so far in 2Q22, inflation has not been contained significantly –despite favorable seasonality, as well as maximum prices and energy subsidies–, with many pressures at the core component. In our view, this will continue for the rest of the period and will extend at least to the third quarter. In that sense, we believe this is the main challenge for consumption. However, this could keep growing driven by the strength in fundamentals such as employment and wages, remittances and banking credit. On the other hand, investment and government spending would be the components with the lowest growth, considering the most challenging base effect. However, we do not rule out that some momentum can be maintained given the period before the elections, where additional support is typically seen, as well as efforts to continue with key works of the federal government. Thus, we think aggregate demand will continue to recover, although at a slower pace than in 1Q22. 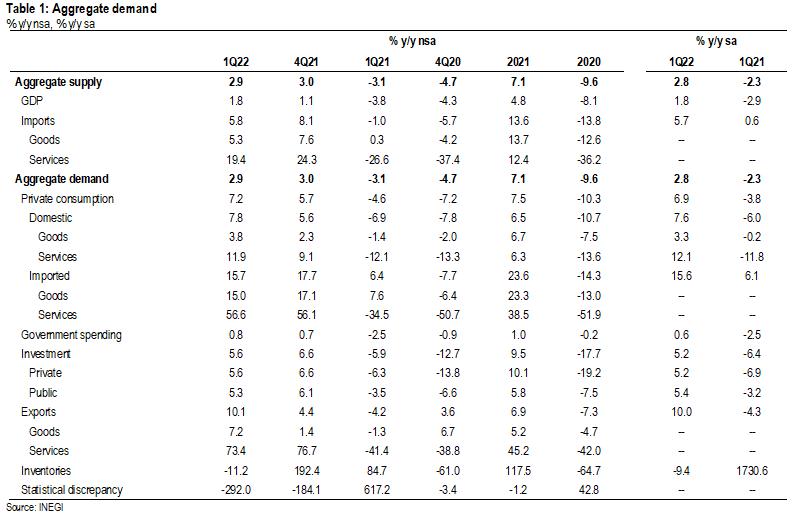 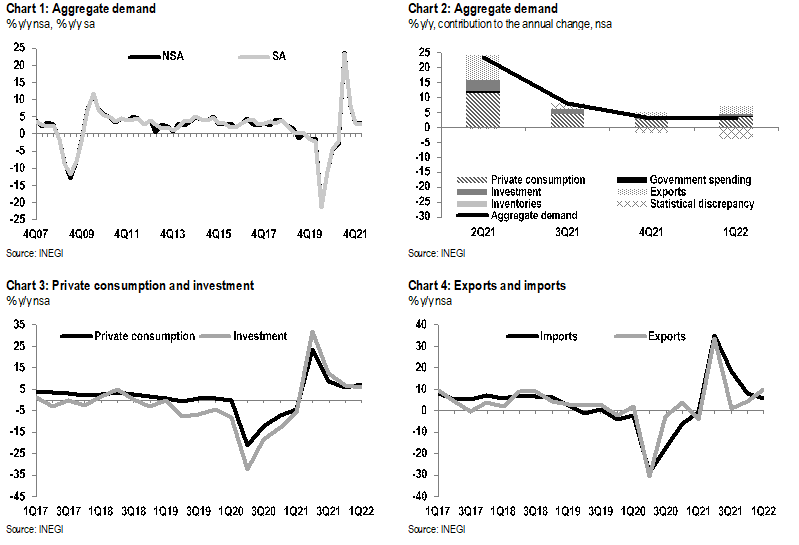 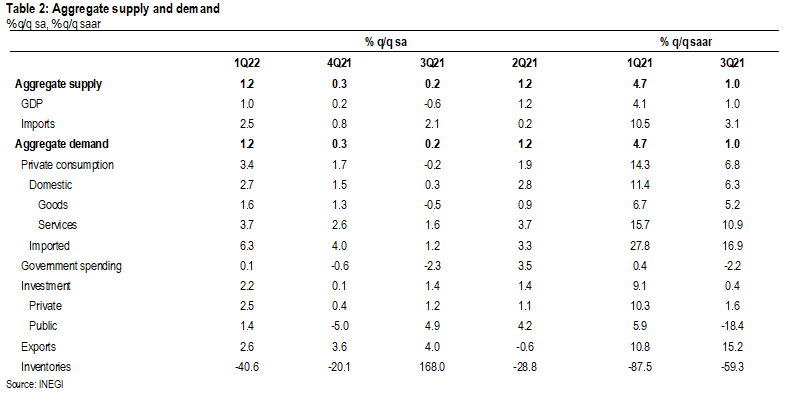 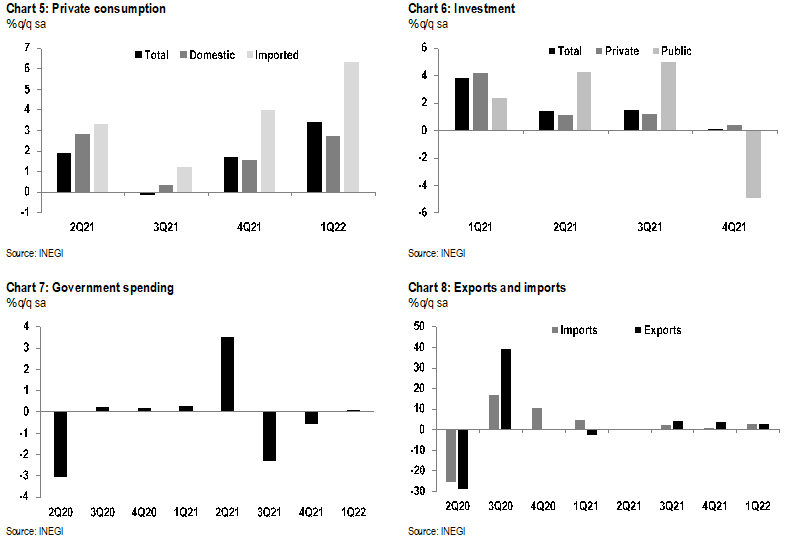