GDP falls 8.6% y/y in 3Q20. This figure was in line with consensus and virtually matched INEGI’s preliminary print. As a result, it was slightly better than our  -8.7%. This represents a significant improvement relative to the -18.7% seen in the previous quarter (see Chart 1). As previously mentioned, this result reflects several efforts to restart economic activity after the lockdown period, albeit still dealing with restrictions related to the pandemic as well as the overall economic shock. By sectors, industry was up 8bps relative to the preliminary print, remaining at -8.8% y/y (see Chart 2), with mining maintaining a relatively stable performance at -3.3% –still benefited by the oil sector operating near full capacity– and with manufacturing regaining some strength at -7.1%, boosted by external demand. Going into services, these were revised marginally down, by 4bps to -8.8%. Inside, weakness prevailed in categories related to social interaction (see Table 1), such as lodging (-53.6%), recreational services (-64.9%) and transportation (-24.9%). Meanwhile, some of the essential categories were relatively more stable, such as healthcare (2.5%) and government activities (3.1%) were among the few in positive territory. Moreover, there was a positive surprise in categories such as business support (2.1%) and real estate (-0.6%). Primary activities were adjusted higher at the margin, to 7.7% from +7.6% in the preliminary print.

Sequential performance an inch higher on services. With seasonally adjusted figures, GDP rebounded 12.1% q/q (Chart 3), 7.4bps above the preliminary print. Therefore, after reaching levels not seen since almost ten years in the previous quarter, this recovery means that activity is now closer to those seen since late 2014 (Chart 5). Despite this quarter’s advance, it should be recalled that lingering weakness had been observed for some time, so activity is about 8.9% below its previous peak, which was observed in 1Q19.

On a more positive note, services recovered more strongly than expected since the preliminary print was released, with a further revision higher today of close to 20bps, to 8.8% q/q. We believe this is explained by a plethora of factors, the main being the start of the reopening since June. Nevertheless, the improvement in epidemiological conditions throughout the quarter (with most states better in the ‘traffic light’ indicator), the gradual adaptation of the population to social-distancing guidelines and overall fatigue of confinements were also relevant drivers, particularly for the informal sector. Sequentially, interpretation of the data should be done with caution (see Table 4). First, there are those sectors most impacted by the lockdowns, which in turn led in the rebound given a very low base effect. Among them, we include recreational services (61.5%), lodging (58.5%) and transportation (22.4%). Second, we highlight others likely helped by their essential status, such as retail (29.8% after contracting 27.8% in 2Q20), wholesale (15.5% after -17.7%), healthcare (1.1%) and government services (1.8%). The former two were likely aided also by stronger-than-expected remittances, among other factors. Third, we flag those that look like significant outperformers, such as corporates (9.4%) and real estate (1.5%). On the contrary, weakness extended in sectors such as mass media (-2.9%), professional services (-1.7%) and, to a lesser extent, financials (-0.5%). Overall, services stand 8.9% below their peak level in 2Q19.

The latter has lagged the rebound in industry, which surged 21.7% and has been boosted by external demand strength, mainly from the US (Chart 4). This is clearest when looking at manufacturing (31.5%), which outperformed all other subsectors and is very close to reversing the shock from the pandemic, standing only 2.7% below its level in the first quarter. On the other end is construction, recovering 21.8% but only after plunging 31.1% in 2Q20. Mining was more stable (+2.4%) as it is heavily influenced by the oil sector, which remained catalogued as essential during the lockdown. By their nature, utilities share similar dynamics to the latter, up 5.0% in the quarter. Lastly, the agricultural sector has been very resilient, surprising heavily as it accelerated to 8.0% from +0.5% previously, managing to keep growing and benefited by its essential status.

Services accelerated in September. Today, results for the monthly-GDP proxy (IGAE) were also released. Activity in the period surprised heavily to the upside as it declined 5.5% y/y, with consensus at -7.0% and even above our -5.9%. By sector, agriculture stood at 6.3% y/y, industry at -6.2% and services at -5.6%. The period was benefited by a calendar effect as it had one additional working day in the annual comparison. Adjusting for this with seasonally adjusted figures, performance was at -7.0% y/y, which is exactly the mid-point of INEGI’s timely indicator (range: -8.5% to -5.5%).

Sequentially, activity rose 1.0% m/m, in line with our call. Therefore, the economy has extended its recovery since the reopening started in June. In particular, we highlight the acceleration in services, which advanced 1.8% after the 0.9% observed in August. Looking at the details, 8 out of 9 sectors grew, only with education backtracking (-0.3%), although this may have been due to some payback after the increase in the previous month. Positively, sectors with more exposure to social interactions kept rising, consistent with the improvement in epidemiological conditions, new initiatives by companies to increase sales (e.g. virtual concerts and theater, rent your cinema room, drive-in movies) and overall fatigue. Secondary activities exhibited null growth, in line with the industrial production report. Lastly, the primary sector (1.1%) reversed some of the losses in August, likely benefitted by better weather conditions.

We reiterate our forecast of a full-year contraction of 9.0% of GDP in 2020, with slight risks to the upside. Specifically, today’s report confirmed that services have been stronger than expected, with a relevant recovery in sectors most exposed to social interactions, stability in essential ones and other positive surprises. This seems to have extended through October, with the timely indicator for the month anticipating a 1.4% m/m advance for this component. Other related indicators already available support this signal, such as ANTAD and auto sales, along air passenger traffic in airports managed by private companies. Moreover, preliminary results of El Buen Fin (Mexico’s Black Friday) have been positive, with Mexico City’s National Chamber of Commerce, Services and Tourism (CANACO, in Spanish) reporting a 4.3% advance (in nominal terms) under this initiative. Nevertheless, it should be recalled that this campaign was extended because of the pandemic –officially from November 9th to 20th, but with some businesses extending it until the 22nd–, which could be skewing results up. In this respect, it is our take that it will be key to see the accumulated performance in November and December, as some people could have front-loaded their holiday season purchases.

On the contrary, signals from industry are more negative, with INEGI’s timely indicator for this component estimating a 0.5% m/m contraction in October. Nevertheless, this contrasts with data pointing to additional strength in manufacturing, such as the IMEF manufacturing and indicators in the US. In this respect, the PMI manufacturing for November in that country reached 56.7pts, accelerating for a seventh straight month. Given this, we will heed tomorrow’s trade balance release for October to gauge the most likely direction of some of the tendencies of the sector, which has been the most vigorous so far. We also believe that the triumph of Joe Biden in the US is favorable as it eliminates one important source of uncertainty that could be capitalized by our country because of USMCA. Therefore, weakness is possibly more concentrated in construction and mining. Specifically, the former could be more impacted by the worsening of epidemiological conditions, which exacerbated by the end of October. So far, timely releases such as business confidence and aggregate trend indicators have been more positive sequentially. On the other, hints on the latter show renewed headwinds, mostly due to hurricanes Delta and Zeta which disrupted the oil sector (but also with railway blockades), which led to the retirement of Pemex personnel in offshore sites.

Considering today’s report and available information so far for 4Q20, we believe risks to our -7.2% y/y forecast for that period are slightly skewed to the upside. In quarterly terms we expect +0.5% q/q, marginally below our 0.6% previously, although this is because of a higher base effect in 3Q20 given the revision to 12.1% from 12.0% in the preliminary report (see Table 2and Table 3). We decided to maintain our call because of the new wave of COVID-19 ant the effect that is already having in some regions. We highlight new restrictions in Europe and, in a more limited fashion, of some activities in the US and Mexico. This is already visible in some hard data, even though positive news of a vaccine that lift expectations could help confidence recover and reduce savings by some economic agents, although in in our view this is likely to be more positive until next year. 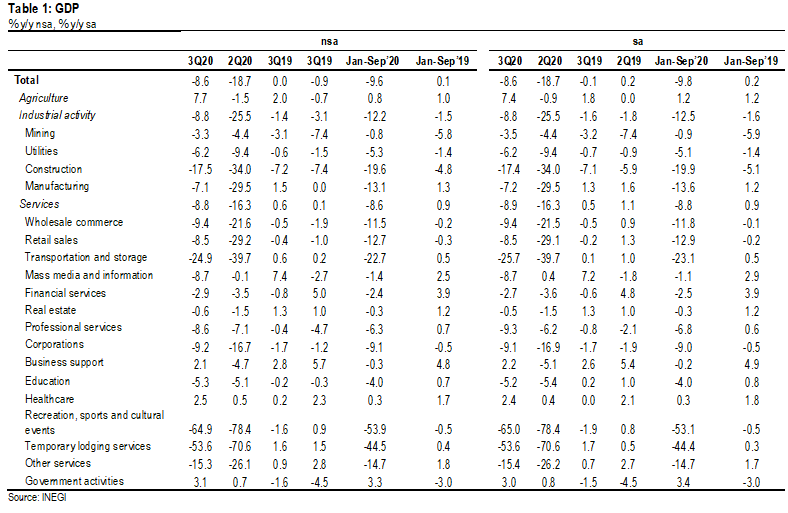 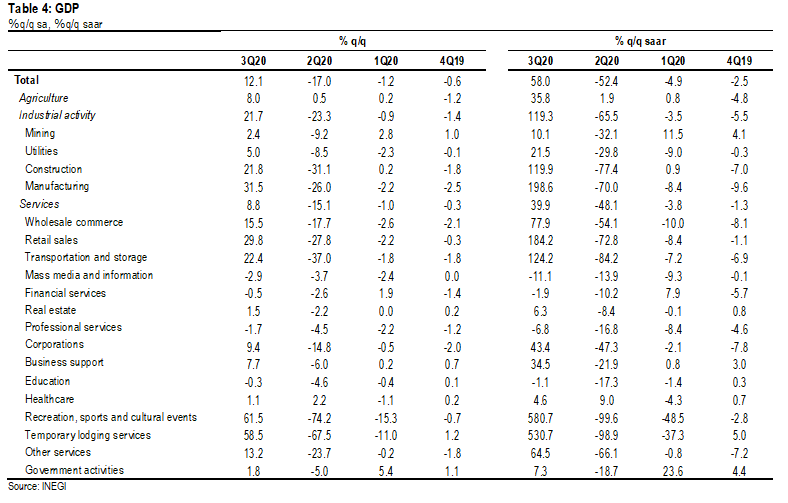