Mexico: 2Q22GDP–Positive surprise with further strength in industry and services

2Q22 GDP better than expected at 2.1% y/y. This compares to our 1.6% forecast and consensus at 1.5%. Moreover, this represents a slight acceleration relative to 1Q22 (Chart 1), despite having a negative calendar effect, as the quarter had one less working day in the annual comparison due to the timing of the Easter holiday. Correcting for this with seasonally adjusted figures, activity grew 1.9% y/y (Table 1). The period began on a right note, taking in some of the dynamism of the first quarter, with favorable fundamentals and other key timely drivers, such as the early payments from social programs ahead of the electoral season. However, as months passed by the outlook turned more difficult, with shocks from abroad (e.g. lockdowns in China, war in Ukraine) and more challenging domestic conditions (e.g. higher inflation, softer fundamentals, increased contagions). Nevertheless, key categories have shown resilience, which we believe was quite important for dynamism to have continued. Back to original data, primary activities stood at 1.5% y/y, industry at 3.3% and services at 1.3%, as seen in Chart 2.

Services and industry kept growing sequentially, with an important rebound in primary activities. The economy grew 1.0% q/q with seasonally adjusted figures (Chart 3), adding a third quarter higher after a hit in 3Q21 (Table 2). With this, total activity remains around 1.2% below pre-pandemic levels (4Q19). We highlight both services (1.0%) and industry (0.9%). Within the former and using known monthly data until May, it seems that non-essential sectors, such as lodging, entertainment and transportation, maintained an upward trend. Considering implied data for June (see section below), these sectors likely regained some speed after a slowdown in May.

Meanwhile, more essential categories likely kept climbing, although at a more moderate pace, especially healthcare and education. Lastly, we believe support services have failed to gather dynamism, remaining quite low and a drag for the total.

Industry advanced for a fifth consecutive quarter, growing 0.9 % q/q (Chart 4). As such, output has finally caught up to pre-pandemic levels, exceeding it by 0.4%. While manufacturing has remained relatively resilient, even despite headwinds (mainly from abroad), construction experienced a relevant acceleration, in our view boosted by public projects along interest from foreign firms in new facilities. On the contrary, mining lagged, with relative weakness in oil output while ‘related services’ stayed quite volatile.

Lastly, primary activities rebounded 0.9% q/q after falling 2.0% in the previous quarter. As such, we believe this is mostly explained by an arithmetic effect, albeit also with drought monitors deteriorating, especially in the northern part of the country. We believe that this has been reflected in higher prices domestically, which are also being affected by external disruptions.

GDP implies a marginal rebound in June. Considering that the monthly GDP-proxy (IGAE) averaged 1.7% y/y in April-May, today’s estimate implies that June was close to 2.1% y/y (nsa). According to our calculations, this would translate to +0.1% m/m, partially reversing some of the losses from the previous month. This is quite positive considering more challenging conditions in the period across the economy. Specifically, these figures point to a sizable increase in services (0.6% m/m), possibly driven by consumption strength and a positive effect on non-essential sectors such as tourism and retail sales. Meanwhile, industry would have added a fourth month in expansion (+0.2%). Using known data from the trade balance and employment, it would seem that this was centered in manufacturing and construction. Lastly, agriculture looks to have taken a tumble (-6.4%), possibly impacted by Hurricane Agatha in the south-southwest, while drought conditions worsened in northern states.

GDP to keep growing in 2H22, albeit at a more modest pace. On its own, today’s print would imply a larger expansion than we had originally expected for the whole year. However, we believe it helps to offset some of the risks that have started to materialize. As such, we maintain our forecast of a 2.1% y/y expansion in full-year GDP, with sequential increases of 0.3% and 0.1% q/q in 3Q22 and 4Q22, respectively (see Table 3 and Table 4). This remains more positive than consensus (at 1.8% according to the latest banking sector survey), although more modest than the IMF’s latest revision to 2.4%.

In the short-term, we believe some dynamism could be in store, supported by some favorable developments in both demand and supply. On the former, social program payments resumed at the beginning of this month, which will come as a relief after a three-month hiatus due to the electoral ban. In addition, fundamentals recovered in the last month, mainly employment, which should also boost demand. On supply, higher imports in June might set the stage for an expansion in manufacturing output, especially considering dynamism in intermediate goods and the large drop in US inventories in the second quarter.

This is relatively consistent with other indicators that point to an easing in trade disruptions, which could help alleviate some price and supply pressures. However, not all signals are positive, as evidenced by PMIs in the US, with the manufacturing indicator from S&P Global lower at 52.7pts, and services even contracting at 47.0pts. This is especially relevant after the downside surprise in US 2Q22 GDP, despite an additional uptick in consumption. Domestically, risks from the fifth wave of COVID-19 contagions prevailed in July, likely limiting employment growth –given new facilities to obtain sick leave permits. In addition, risks for primary activities prevail, with SEMARNAT declaring a ‘state of emergency’ because of “severe, extreme or exceptional” droughts, in place since July 13th. Reports state that the most affected states include Aguascalientes, Baja California, and Sonora.

Going forward, the main risks for our forecast include prevailing price pressures, along increased fears of a global recession on the withdrawal of monetary stimulus. Regarding the former, some commodities have shown moderations, but supply constraints for production continue, including grains (due to the war in Ukraine) and oil, prevail, which will likely limit the magnitude of the decline. As such, global central banks, led by the Federal Reserve –and followed-up by Banxico– will continue hiking rates and reducing stimulus with other measures, taking a toll on investment prospects and boosting recession fears further. In addition, another latent risk remains the implementation of the Covid-zero policy in China, with the propagation of a new wave likely having negative effects on global output. lastly, investors will be watching the resolution of the formal request by the US and Canada to begin consultations on Mexico’s energy sector, which could be followed by a panel under Chapter 31 of the USMCA framework.

Nevertheless, we believe some positive factors might continue, including resilient fundamentals, mainly employment, loans, and remittances, although the latter may moderate in tandem with the US labor market. Despite concerns about CAPEX because of higher rates, interest from foreign companies continues with nearshoring plans, which could support investment. While the outlook looks more challenging, we remain relatively optimistic about economic performance for the rest of the year. 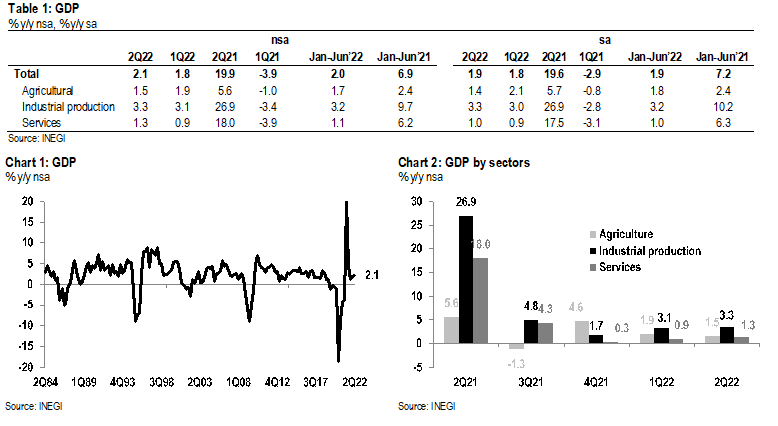 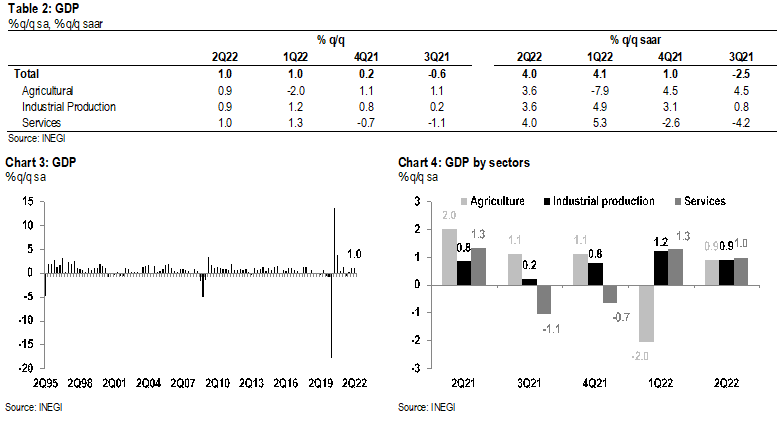