2021 midterm elections. Yesterday, midterm elections took place, in which more than 20 thousand posts were elected at both the federal and local level. Among them, we highlight the renovation of the full 500 seats in the Lower House and 15 governorships. There were also elections for 30 out of 32 state legislatures (except for Durango and Hidalgo) and 18,868 posts including municipalities, trustees, and counselors, among others. In terms of the total positions elected, this was the biggest election in the country’s history, recalling that the last electoral reform aimed for consolidation to eventually have only two electoral processes in each six-year presidential term. We should mention that, as of today, results are not official. Nevertheless, the National Electoral Institute presents timely information about trends based on the Preliminary Electoral Results Program (PREP, in Spanish). We use this data for results in this report. In this respect, District Accounts, from which official results are obtained, will begin on June 9th.

With these results, an estimate for the remaining 200 representatives allocated through the proportional representation principle must be made. According to projections by INE (Quick Counts), Morena would obtain about 196 seats and 82 would go for the rest of the coalition (PVEM and PT). This totals 278 positions, not enough to obtain a qualified majority, which requires two thirds of the chamber (334 seats). We recall this is a necessary, but not sufficient, condition for Constitutional changes. Another relevant factor for the final configuration of the Lower House is the modification to the rules for the determination of proportional representation officials, which were established to avoid potential overallotments (for details, listen to our podcast, Norte Económico, with special guest Roy Campos from Consulta Mitofsky –available only in Spanish).

… and in governorships. Out of the 15 state governorships, preliminary results so far show a very close race in 3 of them (+/- 5%-pts), with the remaining 12 exhibiting a clearer trend. Considering those at the first place in all of them, the president’s party and coalitions would win 11. Hence, the opposition would obtain the remaining 4. One of the most closely watched races was Nuevo León, with the current leader being Samuel García from Movimiento Ciudadano (MC). The spread with the second place is somewhat narrow, with about 8.4%-pts.

On the other hand, in Baja California, the winner seems inclined to be Marina Avila from the Morena/PT/PVEM. The difference in this contest is wider, with 16.6%-pts higher. One of the most contested races is Campeche, with Layda Sansores from the Morena/PT coalition in first place by only 0.7%-pts. The remaining close elections are Michoacán (with a 2.4%-pts spread between the first and second place) and San Luis Potosí (3.1%-pts). Details by state and the percentage of votes counted so far are presented in the following table.

Strong citizens’ participation. Using data for federal elections –given that these are held across the entire country–, the PREP shows that the participation rate reached 52%. We believe this is very positive, as it is considerably higher than the 48% in the 2015 election. In this respect, efforts to consolidate local with federal processes may be boosting results. Nevertheless, and consistent with previous periods, it remains below levels seen in Presidential elections (average: 66%), as shown in the chart below. 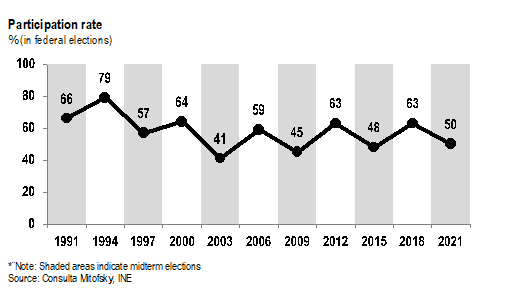 Final remarks. Yesterday, the most important midterm elections in the history of Mexico were held. This is due to the number of positions that were voted and their importance. The participation rate stands at 52% at the time of this edition (with 82% of records computed in the PREP). This level of citizen participation has been higher than the most recent midterm elections of 2015 (48%), 2009 (45%) and 2003 (41%), reflecting greater interest in exercising their democratic rights and complying with their civic duty. According to INE’s President, Lorenzo Córdova, 99.73% of the voting places were installed without any problem, in an environment that was generally safe and with good logistics despite the challenges of the pandemic. So far, the INE has released preliminary information based on the “Quick Count”, as well as an important advance in the PREP. The official tallies will begin from this Wednesday, June 9th.

Based on information obtained so far, in relation to the renewal of the 500 seats of the Lower House, the alliance of ruling-party Morena together with PVEM and PT would obtain between 265 and 292 seats, less than the 334 seats it has in the current legislature. This gives them an absolute majority, which allows them             –among other things– approval of the budget, as well as modifications of regulations and secondary laws. However, on this occasion they will probably not have a qualified majority, meaning they will not be able to carry out reforms to the constitution by themselves. On the other hand, the alliance made up by PAN, PRI and PRD parties could obtain between 181 and 213 seats, more than the 137 that it currently has. Meanwhile, Movimiento Ciudadano would reach between 20 and 27 seats (currently 26). Broadly speaking, this reflects a greater balance of political forces within the Lower House.

Another focus was in the 15 governorship races. Based on information available to date from the INE, the alliance led by Morena has a clear advantage in 9 states (Baja California, Baja California Sur, Colima, Guerrero, Nayarit, Sinaloa, Sonora, Tlaxcala and Zacatecas), PAN in 2 states (Chihuahua and Querétaro), and Movimiento Ciudadano in 1 (Nuevo León), while 3 states find themselves with a very narrow margin among contending candidates (Campeche, Michoacán and San Luis Potosí). This reflects a greater territorial presence of the alliance led by Morena in the states that voted for governorships, since prior to the election it only governed in one state: Baja California.

Finally, the election in municipalities and in 30 of the 32 local legislatures, has also been of great relevance. So far, some preliminary results have been released –mainly in very important urban centers–, reflecting a balance of the vote towards the different parties. More specific information will be released in the coming days.

All in all, yesterday’s midterm elections in Mexico were carried out in an environment of relative calm, good logistics, and high citizen participation, reflecting the evolution and strength of Mexico’s democracy. So far, preliminary results reflect a greater balance between the different political parties.