Mexico: 1Q22 GDP – Back on the growth trend, but with risks ahead

GDP in 1Q22 in line with expectations at 1.6% y/y. This compares to our 1.9% forecast. At the margin, the annual rate accelerated relative to 4Q21 (Chart 1), in part helped by one more working day relative to the same period of 2021, albeit with a slightly more difficult base effect. Correcting for this with seasonally adjusted figures, activity also grew 1.6% y/y (Table 1). Given lingering economic weakness since the second half of last year and the surge of COVID-19 cases due to the ‘Omicron’ wave –with a new historical high by mid-January–, we think these results are favorable. In this sense, the virus had a more muted impact. To some extent, this was likely driven by a less aggressive strain despite being more contagious, along with progress in vaccinations (according to Our World in Data, 66% of the population had at least one dose as of March 31st from 63% at the end of last year). Nevertheless, it is likely also related to fatigue, more adaptation and higher natural immunity. Back to original data, primary activities stood at 1.8% y/y, industry at 2.9% and services at 0.6%, as seen in Chart 2.

Services rebound sequentially, while industry remains resilient. The economy picked up 0.9% q/q with seasonally adjusted figures (Chart 3), resuming its recovery after stalling in the second half of 2021 (Table 2). The main highlight was services (+1.1%). Information by sector is still missing. Nevertheless, based on the monthly GDP-proxy IGAE until February, outperformance seems to have been centered in recreational and transportation services, both among the most affected by the pandemic.

This seems consistent with higher mobility, which surpassed pre-pandemic benchmarks according to several indicators. Retail and housing were also relatively strong. Although it suggests lower risks for domestic demand, we remain cautious as professional services were likely a drag. Apart from virus dynamics, we believe today’s results were also helped by employment gains and an additional recovery in consumer credit, among other factors.

Industry advanced for a seventh consecutive quarter (since the reopening started pace in 3Q20), at 1.1% (Chart 4). Specifically, with today’s data, factory production is just 0.8% lower than in 4Q19, before the pandemic (while services are at -3.4%). Despite persistent supply chain issues and significant cost pressures, US demand remains strong, as signaled by the relative resiliency in manufacturing. Meanwhile, construction and mining have lagged so far, with the latter more concerning given an environment of elevated prices (especially by the end of the period because of the war in Ukraine).

Lastly, primary activities contracted 1.9%. This decline comes after three consecutive quarters higher, to which we must add its commonly high volatility. In addition, the weather may have had an adverse impact, although cost pressures were likely a more significant driver, as suggested by stronger price pressures in meat and egg relative to fruits and vegetables in inflation figures.

GDP implies an expansion in March. Considering that the monthly GDP-proxy (IGAE) averaged 2.1% y/y in January-February, today’s estimate implies that March was close to 0.0% y/y (nsa). According to our calculations, this would translate to a 0.2% m/m expansion. This signals a sizeable improvement in the primary sector, but with sequential declines in both industry and services. For the latter, while it is somewhat surprising, it would not be as negative considering sharp improvements since November. It would also be consistent with signals from the latest employment report. Meanwhile, in industry, a moderation might be in order, in line with the trend seen in non-oil exports. It is our take that weakness within this sector will likely prevail in construction.

Mexico’s GDP growth to moderate as global headwinds are on the rise. In our view, today’s report was relatively favorable, supporting our above-consensus GDP forecast of 2.1% y/y in full-year 2022. Importantly, this estimate already implies more modest sequential growth in the second quarter. Specifically, and incorporating today’s results, we expect 2Q22 GDP to grow 0.4% q/q (see Table 3 and Table 4). In this respect, headwinds have been rising in several fronts, with the most relevant being: (1) Higher price pressures, especially in commodities such as food and energy; (2) renewed supply chain issues given the implementation of strict lockdowns in China due to COVID-19, as well as disrupted trade flows because of sanctions to Russia; (3) expectations of more restrictive central bank policies given this backdrop, increasing interest rates and market volatility, including in the MXN; and (4) greater geopolitical uncertainty in some regions across the world. We will look closely if these factors show up in advanced data for April, such as confidence indicators and IMEF’s PMIs, to be released next week.

Despite of this, we remain relatively optimistic, especially because of US demand. In this sense, the US flash PMI manufacturing for April –which is relevant for the same sector in Mexico– picked up again to 59.7pts, with growth driven by output and new orders, including from foreign clients (with at least some of them likely from our country). Moreover, it is our take that yesterday’s US GDP for 1Q22 (with a 0.4% q/q decline) was stronger than it seems at first sight. Some details also looked favorable for Mexico, such as more convincing evidence that consumers are shifting their spending more decisively to services instead of goods. In this respect, one key driver for our country may be an acceleration in the arrival of US travelers (helping tourism and transportation services). Available data suggests that air passenger traffic in private airports remained strong in March, while we believe it kept outperforming in April. Overall, we remain positive about the lift that some sectors (both in industry and services) could experience because of this.

Domestically, signals are more mixed. First and foremost, more caution is granted because price pressures remain unabated. As mentioned above, some sectors more closely related to the local economy (e.g. construction in industry, as well as professional services in tertiary activities) have been weak recently. Secondly, another issue might be some volatility in consumption if families quickly spent resources from the disbursement of social programs due to the electoral ban, remembering that payments were brought forward to February and March. Despite of this, some fundamentals for consumption have surprised to the upside, highlighting remittances (also related to the US) and employment. Lastly, despite the possibility of higher growth in public sector investment as resources are spent on key projects, an environment of even higher uncertainty and interest rates ahead remains a heavy drag for the private sector, and therefore, difficult for a sustainable rebound and contribution to GDP from this component of aggregate demand. 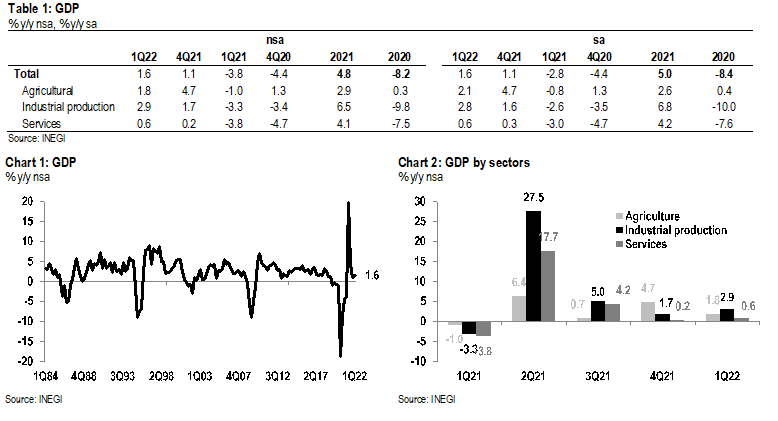