Mexico: 1H-Nov CPI – Another downward surprise despite a high print at the core

Inflation at 0.56% 2w/2w, better than expected. The latter is once again due to a favorable performance in the non-core, at 1.19%. This component has an upward bias because of the second increase in electricity tariffs (20.3%) as summer subsidies ended, adding 35bps to the headline. Nevertheless, this category benefited again from a drop in LP gas (-1.3%), more than outweighing for a marginal increase in low-grade gasoline (0.2%). In agricultural goods (-0.4%), the most sizable decline was in fruits and vegetables (-0.7%), helped by onions, potatoes, and husk tomatoes (see table below). Meat and egg came in at -0.1%, highlighting chicken (-0.5%). The core was high at 0.34%, with goods (0.3%) driving this category. Processed foods moderated at the margin (0.3%), while ‘others’ (0.4%) were more mixed, with early discounts by some retailers ahead of El Buen Fin (Mexico’s Black Friday) partially offsetting for some of the usual adjustments to the upside. In services (0.3%), pressures remained in ‘others’ (0.6%), impacted by tourism categories, but with persistent increases in dining away from home.

Annual inflation adds five fortnights in a row lower... In bi-weekly frequency, annual headline inflation fell to 8.14% from 8.28% previously, further away from the latest high of 8.77% in August’s second half. This has been driven by the non-core, mostly an unexpected decline in the price of LP gas, but also by a more benign performance in agricultural goods. In addition, despite the announcement by OPEC+ to cut its production, oil price pressures –along with gasolines– have been relatively limited and have even declined in the last few weeks on building fears of a global recession. Favorable dynamics –as extrapolated by futures curves– could extend to the remainder of the year, further helping the non-core. Another positive development is that the local bird flu outbreak seems to be relatively contained despite spreading to seven states, with just 0.07% of total birds in the country in quarantine. As such, the effect on meat and egg prices could be contained. However, the core is still in a more challenging position, with the annual print at 8.66% from 8.45% in the previous fortnight, a new high since the second half of August 2000. Processed foods keep climbing at a brisk pace. In our view, producers are still adjusting prices to make up for previous margin pressures due to higher costs. In addition, some uncertainty persists for ‘other goods’, anticipating the usual decline during ‘El Buen Fin’ in the next fortnight, although these will reverse quickly. Services are more mixed, with some signs of relief in housing, but with restaurants still struggling with higher costs and passing them on to consumers as demand seems resilient. Lastly, we do not rule out the latter to increase because of the World Cup, which could increase price pressures at the margin.

…driving a downward revision to our year-end forecast. Considering the dynamics outlined above and signals from short-term market indicators, we revise our inflation forecast for the end of 2022 to 8.4% (see chart below) from 9.0%. This would be close to analysts’ consensus (8.5%) and implies an average for the quarter of 8.3%, in line with the latest central bank forecast. Turning to the core, the adjustment would be more modest, forecasting it at 8.6% from 8.9% previously, consistent with a more challenging backdrop for this component. In this respect, we highlight recent comments from some of Banxico’s Board members. Specifically, Deputy Governor Jonathan Heath stated in our podcast, Norte Económico (available only in Spanish), that core inflation could reach a high between November and December, but with concerns still lingering around. As such, we believe the outlook has not improved enough for Banxico to finish its hiking cycle despite this revision, needing more evidence that inflation has consolidated its downward trend to justify a more meaningful change to the monetary policy stance. In this sense, we expect the minutes from their last decision, due later today, to suggest that hikes will continue, albeit likely at a more modest pace. All in all, we reiterate our call that Banxico will hike by 50bps in December, followed by two consecutive increases of 25bps each in February and March next year. Hence, the reference rate would reach 11.00% by the end of 1Q23, which we estimate as the terminal level of this hiking cycle. 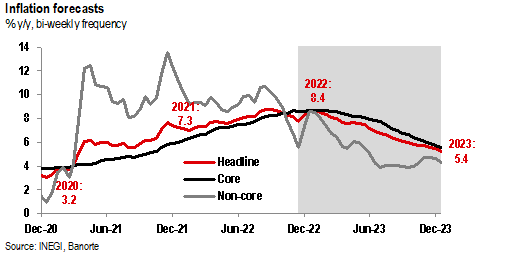 The hiking cycle will continue in Mexico, albeit at a slower pace. The market is betting on a more modest hiking pace from Banxico, in tandem with the Fed, amid a still complex inflationary framework. Moreover, Banxico’s minutes will be released later today, which we think will be important to consolidate market’s expectations. Since the last monetary policy decision, the Mbonos curve has deepened its inversion, with the 2s10s at -88bps from -56bps. In a similar fashion, the TIIE-IRS curve flattened because of a 35bps sell-off in the short-end and gains of 10bps in the long-end. With this, the curve is pricing-in that Banxico concludes its tightening cycle in 1Q23 at 10.90%, very close to our call of 11.00%. The Udibonos curve has shown a slight steepening. Given unusual bond volatility and the shape of the curve, we reaffirm our preference for relative value strategies and avoid directional positions. However, we recognize that long-term Mbonos still have room for additional gains despite the 80bps rally seen so far in November. Specifically, we keep flagging the tenors Nov'38 and Nov'42. In real rates, we do not see Udibonos as attractive enough despite a temporary compression in breakevens. All benchmark tenors remain slightly below their 12-month average except for the 3-year, which stands at 5.02% from 4.69% in the previous week.