Mexico: 1H-May CPI – Above expectations, we adjust our year-end forecast to 5.5%

Inflation at -0.01% 2w/2w, once again surprising to the upside. The print was considerably above consensus at -0.15% but virtually in line to our 0.00%. The core stood at 0.33% (Banorte: 0.24%). Similar to April, the figure was benefited by the final round of subsidies to electricity tariffs, falling 21.3%. However, other components compensated for this. We highlight the rise in fruits and vegetables (1.7%) and meat and egg (0.8%), with the remainder of energy more stable. In our view, the former could still be affected by the harsh drought in several regions of the country. At the core, within goods (0.4%) we noted processed foods (0.4%). However, ‘others’ rose 0.4%, which in turn could be influenced by adjustments before the Hot Sale discounts. Services remain relatively lower at 0.2%. In this category, we noted renewed increases in airfares and tourism services, possibly on improving demand. 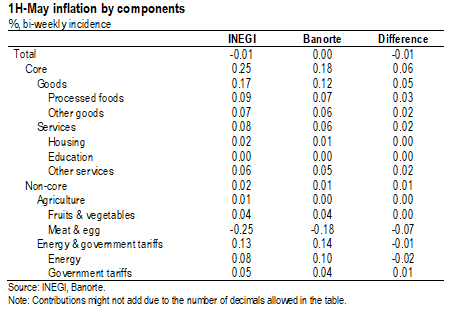 Annual inflation falls on a less challenging base effect but remains above Banxico’s target. This measure fell to 5.80% from 6.08% on average during April. This is in large part due to a less challenging base effect, with inflation in the same period last year standing at 2.83% from 2.15% on average in April 2020, the latter being a low since December 2015. A similar trend will prevail until late August / early September, where we expect inflation to decline to a level close to 4.9%. Meanwhile, the core remained relatively more stable, albeit still pressured at 4.22% from 4.13% in the same period. Lastly, the non-core fell due to the base effect to 10.8% from 12.3%.

We revise our year-end inflation estimate higher, to 5.5% from 4.7% y/y. First, we highlight that higher annual inflation since early in the year –including the modest decline in this report– is not only due to distortions from base effects. Specifically, accumulated price pressures so far have been the strongest since 2017 (see chart below, left). We should remember that energy prices were liberalized in January of said year, with low- and high-grade gasolines up 16.8% and 21.7% m/m, respectively. Given the latter, we also saw passthrough to other goods and services. In our view, current dynamics are driven by a series of supply and demand factors, that despite being considered as temporary, will probably result in even higher-than-expected pressures in coming months. Among them, we highlight several issues that have impacted global supply chains and led to other restrictions, resulting in both raw materials and final goods’ prices going up. Globally, we identify at least three drivers, which themselves are interrelated: (1) Higher transportation costs, resulting in bottlenecks for global trade; (2) shortages of some key goods in the production process, such as semiconductors, aluminum, plastics and lumber, among many others; and (3) relevant droughts in several countries (e.g. Brazil, Argentina and even Mexico), impacting the production of agricultural goods and other commodities. These problems have occurred in an environment of expectations of a strong global recovery supported by the progress in vaccination campaigns along vigorous stimulus in several countries, mainly developed ones. The view of higher aggregate demand growth keeps triggering relative price adjustments, although has also resulted in additional price pressures on top of those stemming from supply. This has been clearer in goods, including oil and several commodities. Given the latter, we once again adjust our year-end inflation call to 5.5% from 4.7% (chart below, right). It is important to note that this revision also includes the view of higher pressures at the core, with our forecast at 4.2% from 3.7% previously, reflecting some passthrough effects from higher businesses’ costs to consumers.

Given a more complex inflation backdrop, we still expect reference rate hikes this year. In this context, our forecasted path for inflation is higher than the one anticipated by the central bank in its latest Quarterly Report (QR), with the inflation ‘hump’ still present, albeit with a much more limited decline than expected just a couple of months ago (see chart below). Although Banxico has already said they will make upward revisions to inflation forecasts, it will be very relevant to see their magnitude in the next QR, to be published on July 2nd. Despite of this, they still estimate convergence to the target in 2Q22. In the short-term we will be looking at the comments on inflation from Board members in the upcoming minutes, to be released on Thursday. Given the latter, we maintain our call of two 25bps hikes in the reference rate this year, taking place in November 11th and December 16th, taking it to 4.50% by the end of 2021. 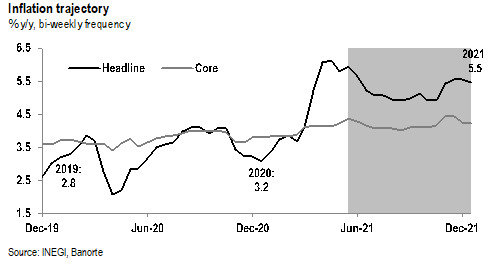 Elevated breakevens depict an expensive valuation for Udibonos. The market’s implied inflation is likely to extend its recent pick-up in the shortest-term tenors, although the high levels these figures already print (3-year breakeven at 4.32%, close to 2017 highs) suggest an expensive valuation for real-rate securities. Meanwhile, this inflation readings will continue to support the market expectation of a more hawkish stance from Banxico by the end of the year, currently pricing-in implied hikes for +61bps for the 4Q21. In terms of strategy, and acknowledging possible pressures to nominal rates in today’s session, we hold our tactical short-term recommendation of long positions in the Mbono Mar'26.