Russia's invasion of Ukraine has had severe consequences for global food security, with the two countries collectively making up 16% of global exports of cereals in 2020 and more than one-tenth of all calories traded globally. This includes 14% of all maize exports, 26% of wheat exports, and 58% of sunflower oil exports.

To make matter worse, much of Ukraine's production takes place in the Black Sea areas most impacted by the war, likely leaving 20-30% of Ukraine's crop area for the 2022 season unplanted or unharvested (especially if fighting continues into the April planting season).

The UN has warned that food prices could surge by another 22% as a result of the conflict, adding to the already eye-watering 54% rise since May 2020 and potentially resulting in another c8-13 million undernourished people in the coming season.

The impact of the war on the global wheat market is particularly concerning, given the sharp price rise (over 40% ytd) and its dietary importance in many EM (with some countries consuming over 40% of their calories from the crop). As such, we take a look at the countries that are the greatest importers of Russian and Ukrainian wheat, in nominal terms, to see which countries may feel the greatest impact: 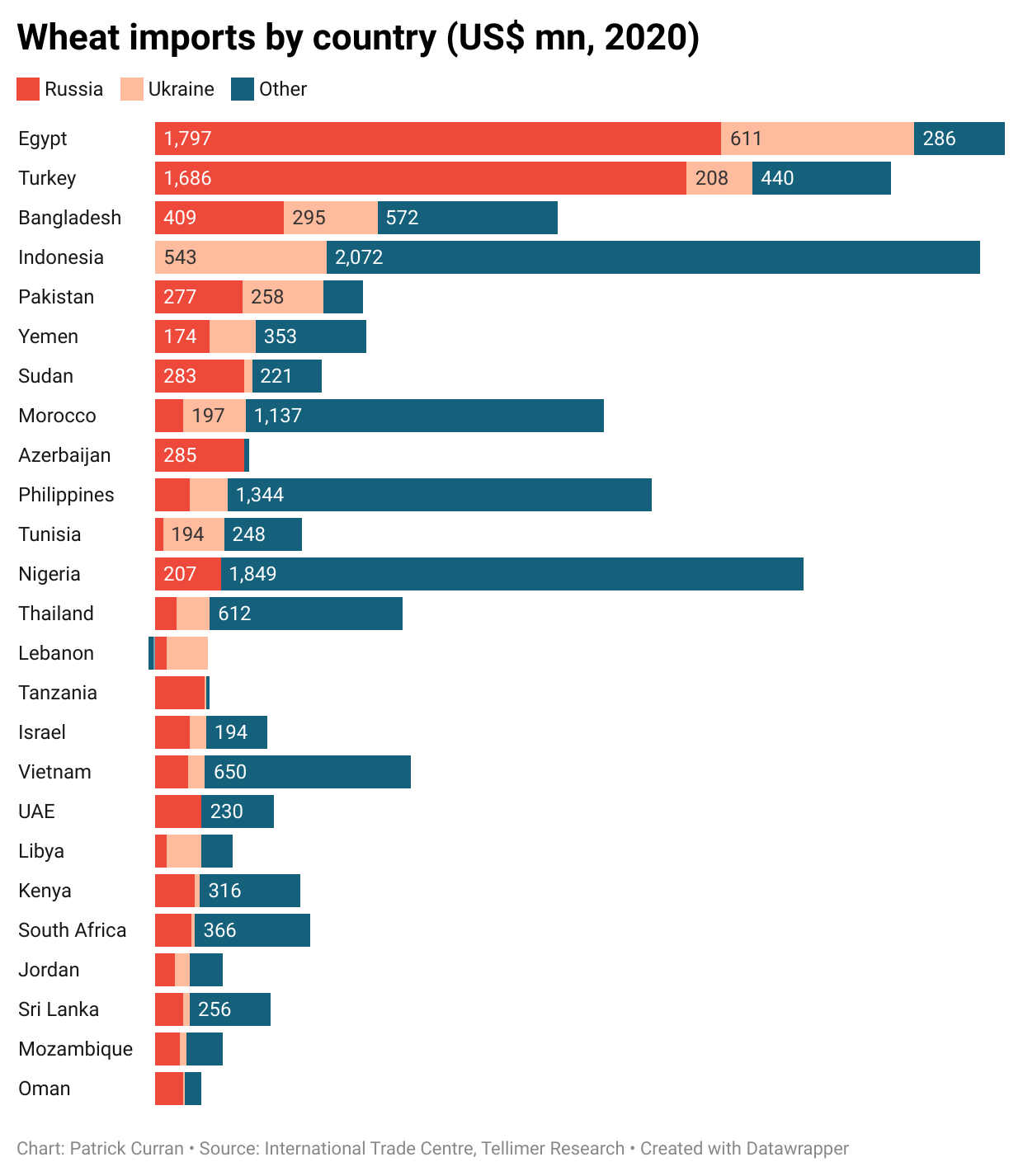 Aside from several countries in Asia and Africa, the impact has been, and will continue to be, felt most severely in the broader Middle East and North Africa (MENA) region, which imports more than 50% of their cereal needs (with a large share coming from Russia and Ukraine).

And this occurs at a time when some countries, like Lebanon and Tunisia, are already facing shortages of FX and key imported goods like food and fuel due to pre-existing, and now worsening, balance of payments (BOP) crises. It also occurs ahead of the holy month of Ramadan, which begins on 2 April. Food consumption typically rises during Ramadan, and wheat shortages have prompted preemptive panic buying in many countries and emptied supermarket shelves.

Indeed, we're already seeing the consequences of rising wheat prices play out in recent announcements by Tunisia, Egypt and Sri Lanka that they intend to seek an IMF programme (and associated currency devaluations by the latter two). While Tunisia was already pursuing an IMF programme due to worsening BOP pressures and rising default worries last year, the wheat crisis has pushed it closer to the brink and likely accelerated the urgency of negotiations.

Conversely, Egypt entered this year on stronger footing, and its turn to the IMF and currency devaluation this week seems to be a much more direct consequence of the war, illustrating the severity of the shock. Meanwhile, Sri Lanka's crisis also pre-dated the war, but the economic fallout finally swayed the government to soften its resistance to an IMF programme and break its soft peg to the dollar, policies that the government had staunchly resisted before the war despite a spiralling economic crisis.

Zooming in on six key countries of interest in the broader MENA region (including Pakistan and Turkey), we illustrate their vulnerability to the worsening global food crisis in terms of their reliance on Russian and Ukrainian wheat imports, as well as current stocks, available FX reserves to pay for more costly imports from other countries, and current inflation before the impact of the crisis is factored in: 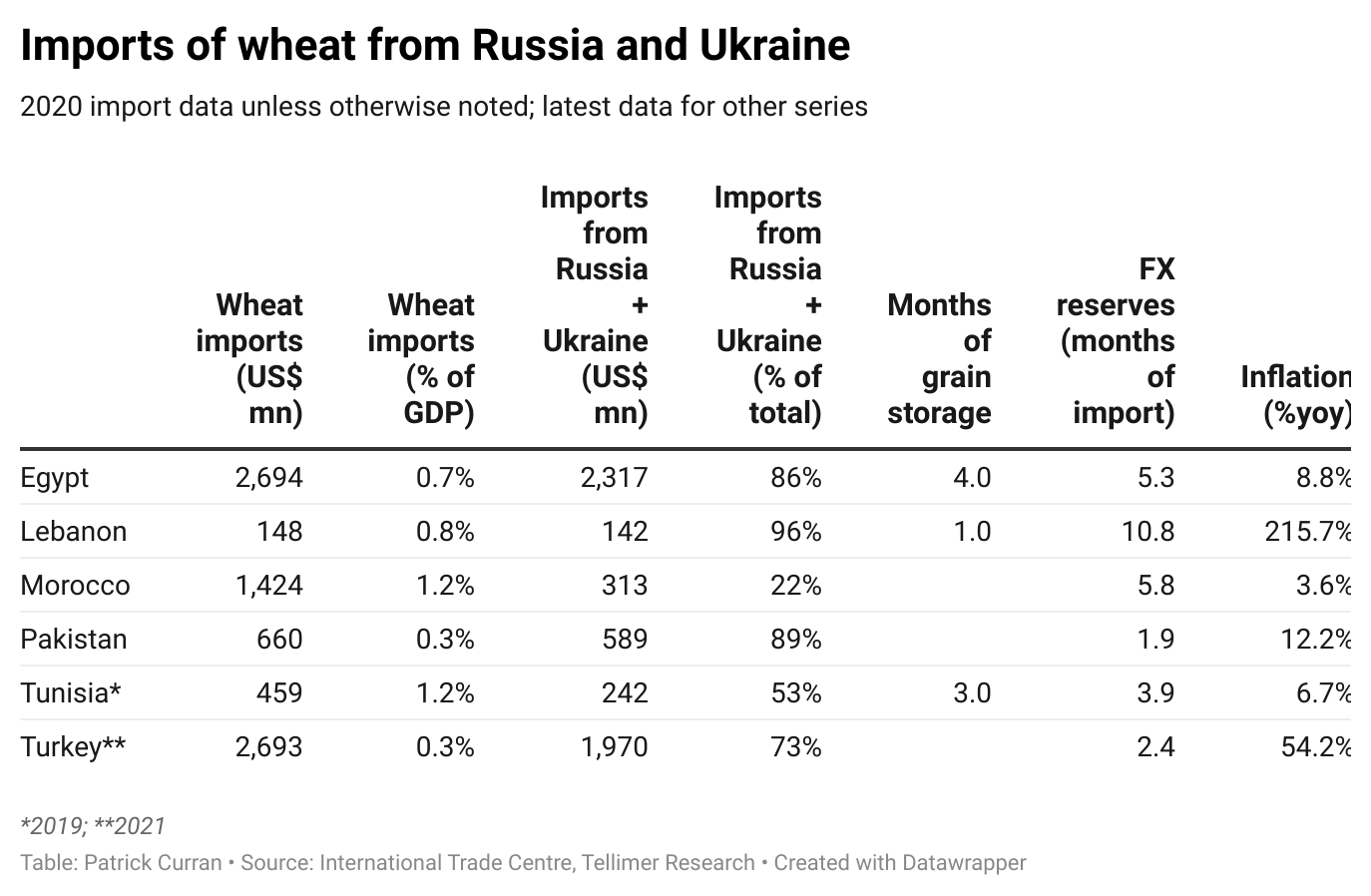 In the note that follows, we will focus on the impact of wheat shortages in three of the countries in our coverage area that we believe are among the most vulnerable: Egypt, Lebanon and Tunisia. Aside from the obvious economic and human costs, these countries may also face a greater risk of social unrest.

In addition to the substantial BOP impact, there will also be a major fiscal impact. Egypt currently provides bread at heavily subsidised prices for about 70 million people at a budgeted cost of EGP40bn (US$2.2bn, 0.6% of GDP) in FY 21/22, with EGP22bn allocated for imported wheat and another EGP18bn to subsidise local production (part of a broader network of US$5.5bn of food subsidies).

The average price for imported wheat has risen to cUS$350/ton, according to supply minister Aly El-Moselhy, versus a budgeted price of US$255/ton. This could add up to US$1bn (0.25% of GDP) to the wheat subsidy bill this year, leading to fiscal slippage.

Subsidy removal is a political non-starter, with an attempt to end food subsidies in 1977 eventually reversed after violent protests. However, the government has resorted to workarounds such as reducing the size of subsidised loaves and has set price caps on unsubsidised bread (the price of which has risen by c25-50% since the invasion began) and banned exports of key staples like flour, lentils and wheat for at least 3 months to stave off price hikes and shortages.

It will be aided in these efforts by a strong local harvest this year, which is expected to come in at 5 million tons versus previous estimates of 4 million, with the government also pursuing policies to incentivise local production. Together with the 4 months of wheat reserves currently on hand, the government estimates that this should be sufficient to cover consumption until November.

The risk of a BOP crisis has also been reduced by this week’s currency devaluation and rate hike, and the authorities are planning to launch negotiations with the IMF for either a funded or unfunded programme. Reserve buffers are also reasonably high at just over 5 months of import, but could quickly be eroded if commodity prices remain elevated.

Lebanon imports 96% of its wheat from Russia and Ukraine. And unlike Egypt, which has substantial stockpiles, Lebanon's grain storage capacity was decimated in the August 2020 explosion at the Beirut Port, which destroyed the state's wheat silos, leaving it with just 1 month of storage capacity (owned by 12 private mills) from 4 months before the explosion.

Lebanon requires about 50,000 tons of imports each month to meet its consumption needs. It received a shipment of 11,000 tons from Ukraine earlier in the month, which was shipped before the war, but two additional Ukrainian shipments have been delayed and no new orders have been placed by Lebanon's 12 private importers since the war began.

The government has therefore stepped in to purchase wheat for the first time in decades, and is reportedly waiting for a credit line from the central bank to import another 50,000 tons of wheat from India. It has also reportedly initiated talks with other countries like the US, but shipments from alternative suppliers could take 2-4 weeks to arrive versus just one week from Ukraine.

The government has been providing a near 100% wheat subsidy at a cost of US$20/month to cushion the impact of rising prices for a commodity that makes up 35% of the population's caloric intake amid a seemingly intractable economic crisis that has pushed over 75% of the population below the poverty line. But with reserves dwindling the economy minister noted that the central bank has "no capacity to pay higher prices."

The owner of wheat importer Crown Mills has also warned of panic buying, saying that "Everyone is buying flour and we cannot fulfill the demand otherwise our stocks will be gone in two weeks." He added that suppliers are turning to countries with the ability to pay given concerns over Lebanon's payment capacity, with the cost of imported wheat rising to US$550/ton from US$350 last month. Without further subsidies, this could cause bread prices to more than double and add to the misery and hunger of a population already on the brink from the ongoing economic crisis.

Tunisia imported 1.2% of GDP of wheat in 2020, equalled only by Morocco within our sample, of which over 50% came from Russia and Ukraine. Even before the war, Tunisia was facing severe shortages of key imports like wheat and medicine due to its BOP crisis, with reports since December of ships stuck at the ports and refusing to unload their cargo due to delayed payment by the state-owned Grains Office (which has a monopoly on wheat imports) amid failure to obtain letters of credit.

While the trade minister says that Tunisia has enough reserves to last until June, bakeries have started to ration bread due to shortages of subsidised flour (which the government denies, blaming the shortages on "speculators" and "thieves"). The price of unsubsidised bread has also risen sharply in recent months, and protestors have taken to the streets as bakery and supermarket shelves have emptied.

The war is likely to make things significantly worse for Tunisia, which has already budgeted TND 7,262bn (5.2% of GDP) for food, fuel and transport subsidies this year based on much lower food and fuel prices, including a US$75/bbl oil assumption for 2022 versus current prices above US$120/bbl (which will push up the budgeted 2.1% of GDP for fuel subsidies).

This is happening at the same time as the government is pursuing an IMF programme, a key pillar of which is the gradual removal and reduction of subsidies. With fuel and food prices increasing sharply from the war, the government will struggle to meet this conditionality without stirring social unrest. This will likely lead to fiscal slippage and could delay IMF negotiations.

Amid Tunisia's worsening crisis, the population is already on edge and President Saied's once sky-high approval rating is quickly slipping. More and more Tunisians are taking to the streets, and Saied's online national consultation for his proposed constitutional changes ended on Sunday with the participation of less than 5% of Tunisia's population. This will only be compounded by worsening food shortages, and raises the spectre of more widespread social unrest and upheaval.