MCB Bank is conducting due diligence to acquire a 55% stake in Telenor Microfinance Bank, the operator of the country’s leading digital payments platform, Easypaisa.

MCB is Pakistan’s fourth-largest bank with strong profitability and premium valuations, but it has lagged its peers on the digital front. Easypaisa, with over 20% market share in mobile money, could fill in that gap, but could also be a great challenge at the same time. Easypaisa is heavily loss-making and MCB’s ROE could come down by 2.5ppts. Note that the deal is still in very early stages and may not actually take place.

In this note, we discuss how Easypaisa is positioned in the mobile money industry, its performance track record and valuation. We also look at how the proposed acquisition could impact MCB’s financials and discuss some of the challenges that MCB could face if it proceeds with the deal. In addition, we compare Easypaisa with bKash to highlight similarities between the two platforms along with some of the ways Easypaisa could turn profitable.

Easypaisa, launched in 2009, is the pioneer of mobile money in Pakistan. Pakistan's mobile money industry is dominated by two major players, JazzCash (owned by Mobilink) and Easypaisa (owned by Telenor). As of December 2020, Easypaisa had 8mn active mobile wallets with an annual transaction value of PKR1.5trn. This translates to Easypaisa’s market share of around 22%, in terms of transaction value.

However, in terms of financial performance, the revenues of Easypaisa have come down by over 20% in 2020 and have remained flat in 2021 so far. In our view, this is mainly because of government regulations to waive inter-bank fees during Covid-19. That said, the revenue growth was not very impressive pre-Covid either, with a 4% and 1% dip in 2018 and 2019, respectively.

Turning to consolidated performance, which includes Easypaisa and the microfinance business, the company’s bottom line has significantly deteriorated in the past few years with losses now touching PKR10bn in 2021e compared with a profit of PKR417mn in 2017. This is due to declining revenues, rising admin expenses and a surge in provisioning expenses. Higher provisions indicate that the microfinance business is creating a further drag on the already cash-burning digital payments business. The bank runs an NPL ratio of 17.2% and the provision coverage ratio is just 52%. 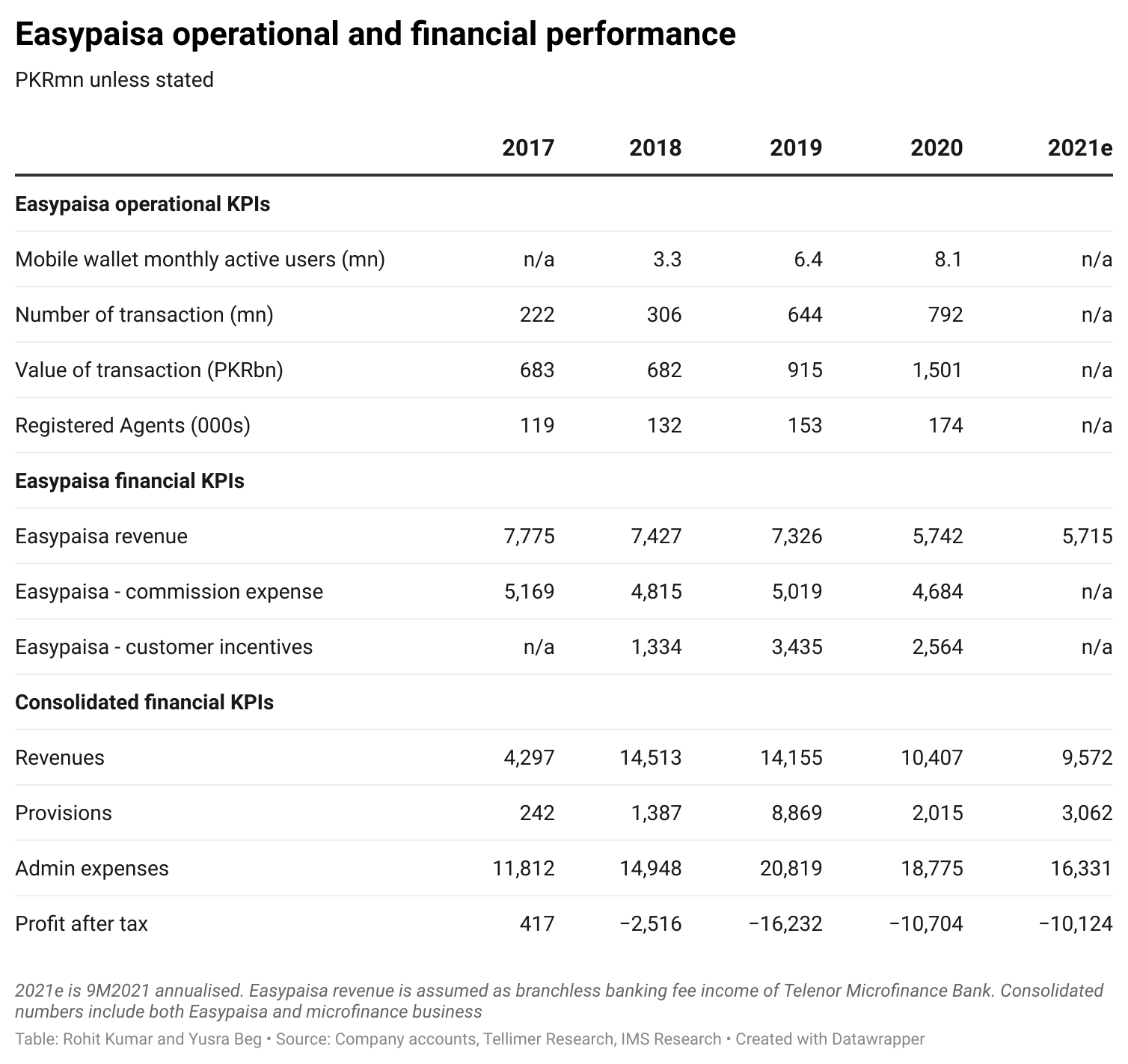 Competition for Easypaisa is high and pricing is under pressure

The mobile money industry is currently dominated by JazzCash and Easypaisa, which are competing aggressively to gain market share. This, along with the government’s decision to remove digital banking fees during Covid-19, has resulted in take rates for Easypaisa coming under pressure. While the resumption in digital banking charges might improve the take rates slightly in the near-term, we think the pressure would continue as various new fintech players are scheduled to commence operations in coming years, and some of them, like SadaPay, have aggressive pricing strategy which could hurt incumbents. 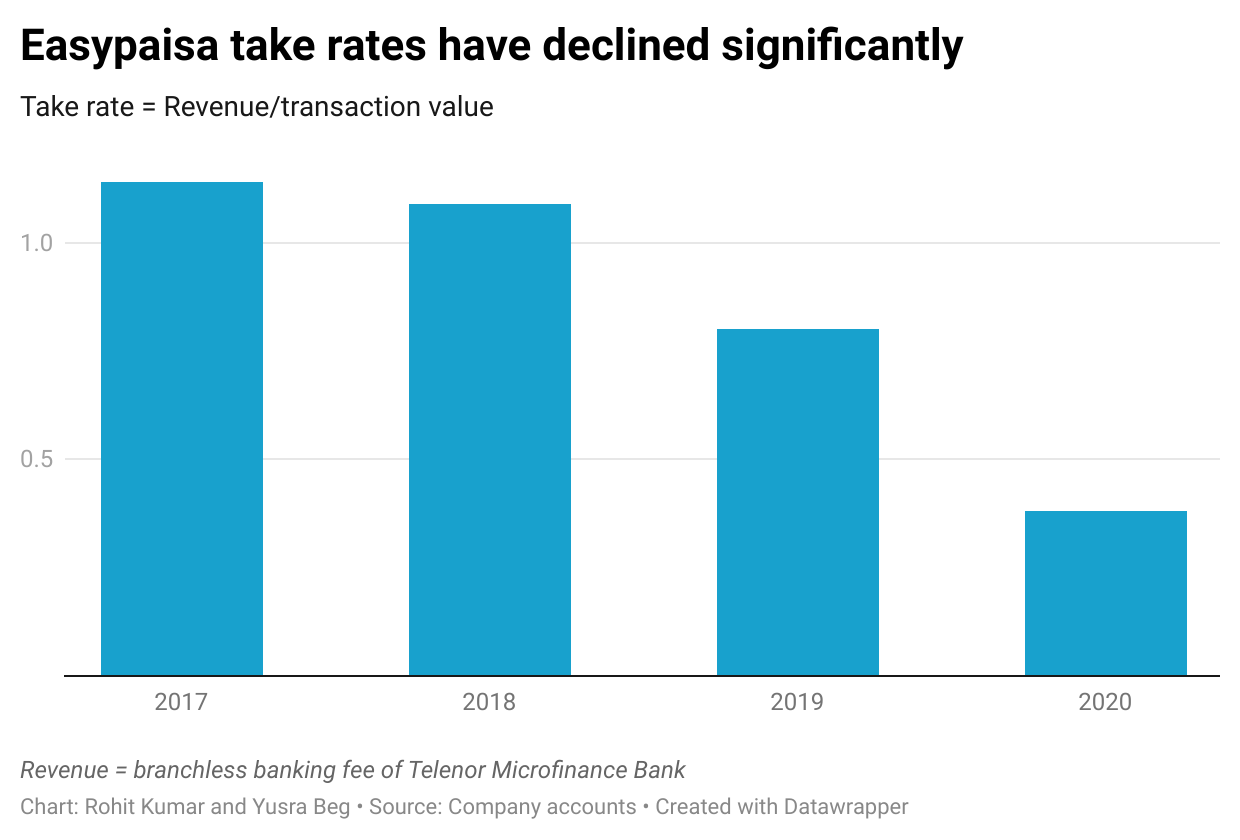 In March 2018, Ant Group acquired a 45% stake in Telenor Microfinance Bank for US$184.5mn, translating into a valuation of US$410mn. This equates to 5.5x revenues and 6.3% of transaction value on 2017 numbers. If we apply the same multiples to 2020 numbers, valuation turns out at US$370mn. However, there could be some other factors in play; the company is burning cash at a significantly higher rate than it was at the time of the Ant Group deal and revenue growth has been very weak due to pricing pressure. On the other hand, investor interest in fintech is greater now than it was in 2018, which could support valuations.

Where does MCB come in?

MCB stands out on most risk-reward metrics, offering superior asset quality and capital structure, manageable costs and growth prospects from its Islamic banking subsidiary – all of which are helping drive ROEs of over 20% through the cycle. This allows it to trade at a premium to Pakistan peers (barring MEBL). 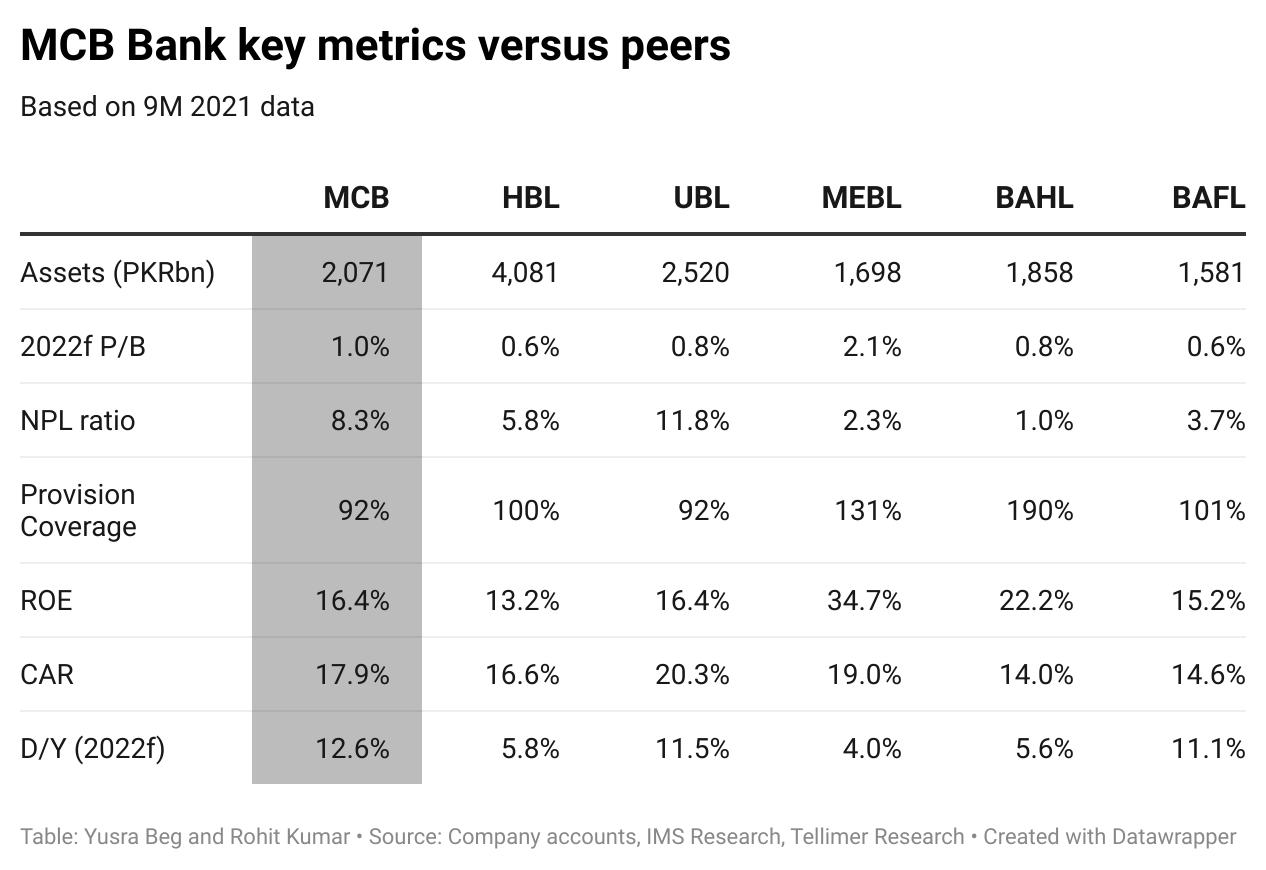 However, MCB has lagged behind in its digital efforts – with a high reliance on branch banking fees among our covered names (21% vs 15% for peers). MCB’s expenditure on Information technology stands at c8% of core expenses (vs c10% for HBL, UBL and BAFL). This reflects in its app rating on Google Play (a score of 2.4 vs over 4 for peers).

Easypaisa could be a strong addition to MCB’s portfolio

We think Easypaisa is the primary opportunity that MCB is eyeing through the potential acquisition of Telenor Microfinance Bank. Easypaisa has a strong mobile application, a widespread agents network, a strong customer base, Ant Group as a partner and is a popular brand.

MCB can capitalise on Easypaisa’s strengths on various fronts including completing its retail franchise. It could also give MCB’s shareholders exposure to the high-growth mobile money industry along with MCB’s current profitable and sustainable business. That said, we do not expect much product portfolio expansion under Easypaisa (eg. digital lending, insurance) as a result of this acquisition.

How the transaction could impact MCB’s consolidated financials

While we think that the acquisition of Easypaisa can provide MCB with exposure to the high-growth mobile money segment, there could be some negative impact on the company’s consolidated financials as Telenor Microfinance Bank is a heavily loss-making business. We have done some calculations on how MCB’s consolidated ratios would look post acquisition, and we conclude the following: 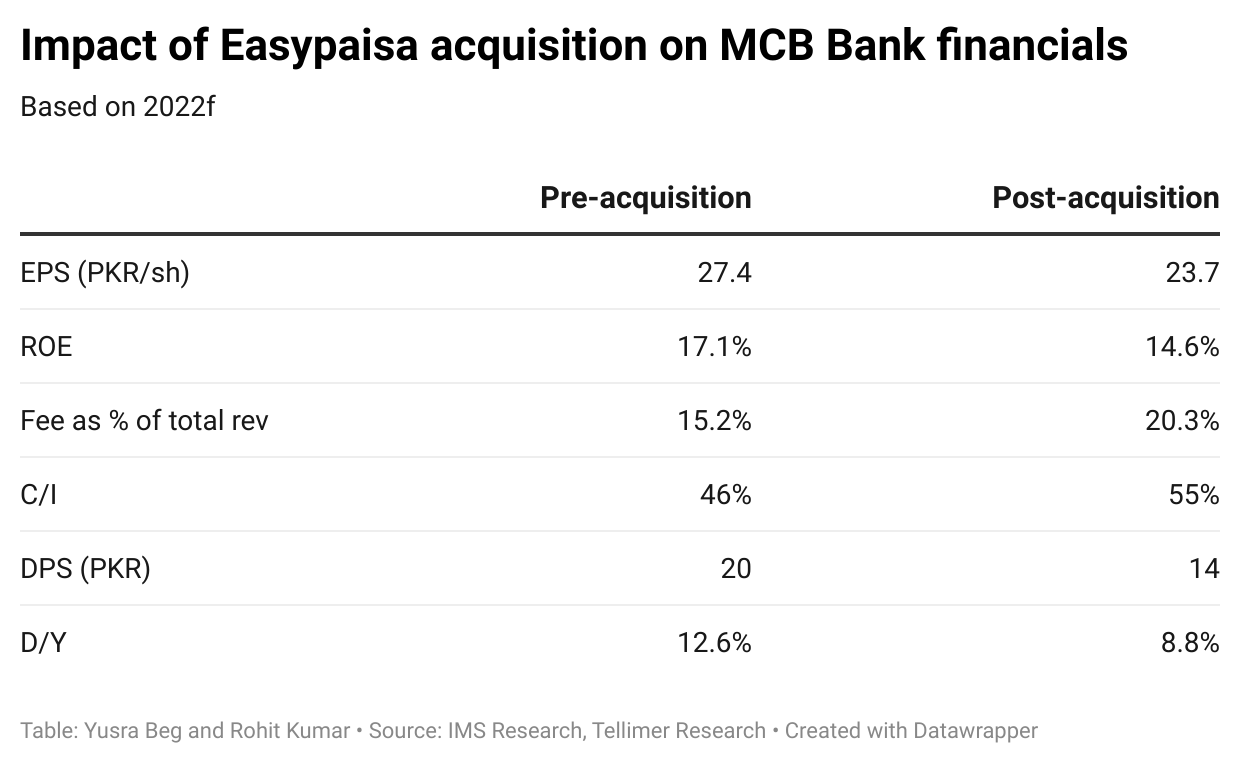 Managing Easypaisa could be a challenge for MCB

Easypaisa is a high-potential franchise with a strong brand in the mobile money industry. However, there are various challenges, which MCB will have to navigate through if it acquires Easypaisa:

MCB’s lack of experience in the digital arena. MCB is a laggard in digital financial services; it has one of the lowest ratings on Google's Play Store among top-tier banking apps and IT expenses have also remained subdued. Running a digital payments platform like Easypaisa requires the right set of expertise, which MCB may be lacking.

High competition in the mobile money industry. Currently Easypaisa and JazzCash dominate, but various new mobile wallet operators like SadaPay and TAG are about to enter the market. They have strong VC backing and are aggressive in their approach in terms of pricing and quality.

High investment is required in the business. The business is running significant financial losses, and is expected to remain so in the near future, which requires the sponsors to inject capital continuously to keep the business afloat. MCB has traditionally been known for its strong and consistent dividend payouts to its shareholders, which could be hurt with this acquisition, in our view.

How Easypaisa could turn profitable?

As discussed earlier, Easypaisa is a heavily loss-making business, but its userbase and transactions are growing strongly. We discuss below some ways the business could turn profitable.

Evolution from agent-driven business to merchant payments. Currently, the bulk of the revenue-generating mobile money transactions in Pakistan are agent-driven, where agents take up over 80% of the fee. The business models needs to shift to high-margin products like merchant payments, but this requires investments in merchants sign-ups and depends on customer adoption, which can take time to pick-up.

Industry consolidation. The mobile money industry usually consolidates around 1-2 players in the long-run. Easypaisa has a strong brand and could turn out to be a winner, which would allow the company to monetise the business. However, given rising competition from upcoming fintechs, this is unlikely to happen in the near term.

Shifting to a super app model. Adding other products such as lending, investments and insurance could contribute positively towards profits. Lending can be highly profitable if executed in the right manner. Customer retention could be also improved with multiple products under one roof. China’s Alipay and India’s Paytm are good examples of successful fintech super apps.

bKash, operated by BRAC Bank, is the leading mobile money operator in Bangladesh with Ant Group as one of its shareholders. Like Easypaisa, it is also running significant losses and is impacting the financial performance of BRAC bank’s profitable banking business. bKash losses reduce BRAC’s ROE by 2.5ppts. The losses have further increased recently due to rising competition (eg. new entrant Nagad by Bangladesh Post Office) which has prompted bKash to spend more on promotional activities.

That said, despite significant losses, bKash is valued at close to US$1bn (by our Dhaka-based providers IDLC Research). We think the experience of bKash could be a relevant reference point for the MCB-Easypaisa deal; there could be a further increase in losses for Easypaisa and the acquisition could impact the overall financial health of MCB, but investors could still value the business highly if the growth remains strong. 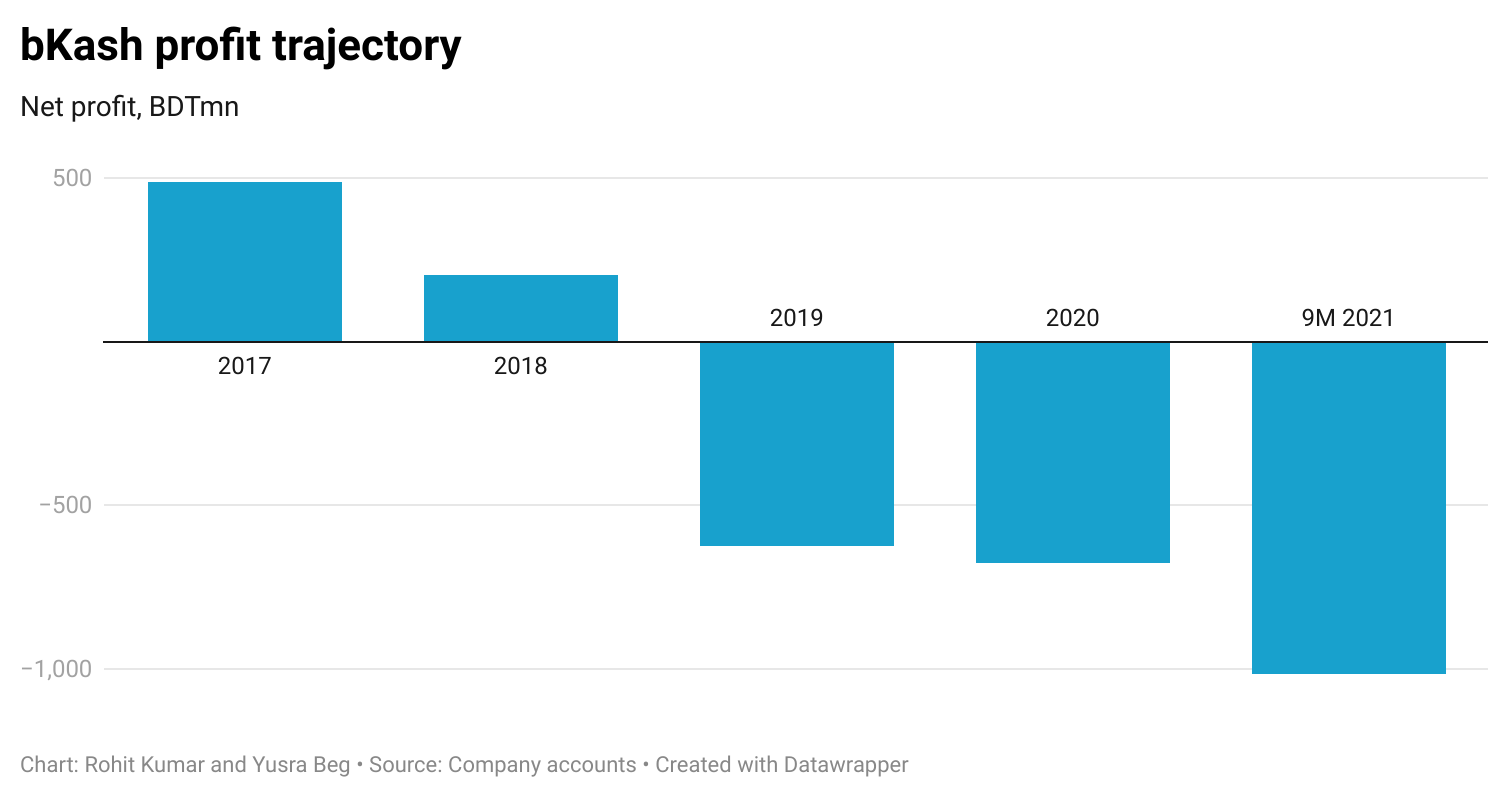 In the below table we compare Easypaisa and bKash on key operating metrics. Easypaisa is relatively a smaller mobile money operator compared to bKash, but its losses are far bigger. 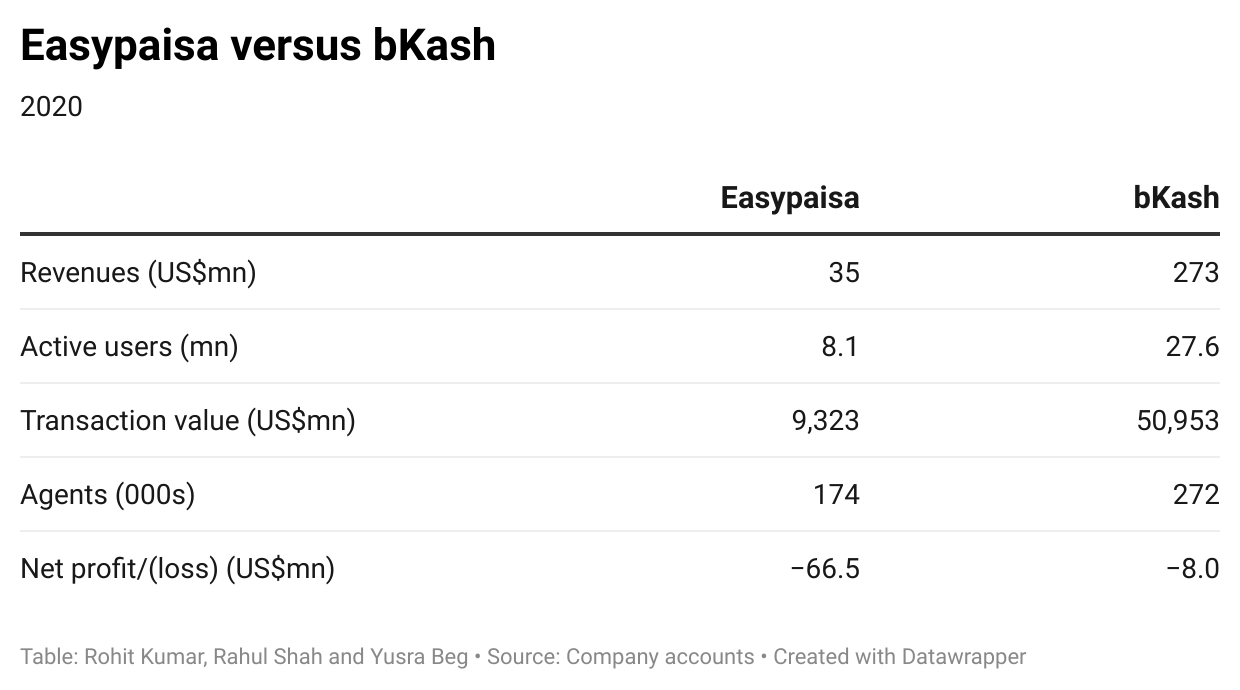