Markets are trading cautiously ahead of FOMC rate decision

All eyes are on the Fed meeting this afternoon and the market reaction it elicits. The BoJ has threatened to intervene if volatility in the JPY spikes, but those are largely meaningless threats as any intervention historically has never worked for particularly long. Meanwhile, the GBP is trading at a near 37yr low, the CAD is under pressure, and the likes of the AUD is struggling for traction. The USD is on the ascendancy and will remain that way for as long as the Fed is perceived to be more aggressive than the other central banks out there. However, so much depends on the guidance the Fed offers investors. Any indication that it will continue to hike aggressively, or if it hikes 100bp, the USD will surge again. Tactically, that could present many opportunities with the USD's valuation already extremely stretched, but we await guidance from the Fed to decide. For now, the EUR-USD is still trading just below parity and is in a holding pattern. The GBP is on the back foot and trading back below 1.1400, while the JPY is trading back up towards 144.00 this morning.

Angola: Bank of Angola Governor Jose de Lima has indicated that the central bank may consider cutting its benchmark rate as inflation slows. According to the governor, the stabilisation of Angola’s foreign exchange market and the consistent deceleration in inflation are creating the type of conditions needed for a revision of the key rate, despite global uncertainties. In August, Angola’s inflation rate dropped below 20% for the first time in more than 24 months, with a firmer kwanza helping curb price pressures. The kwanza has been the second best performing currency against the USD, tracked by Bloomberg. Cutting borrowing costs will make Angola a global outlier as price gains accelerate in many countries across the world.

Egypt: Egypt’s Minister of Petroleum and Mineral Resources has indicated that the government is seeking to export between $8.5bn and $10bn worth of natural gas in the fiscal year 2022/23. The minister added that the government is working on rationalizing electricity consumption to increase the amounts of natural gas for exports. The decline in temperature in September and October is seen as supporting Egypt’s efforts to save more of the natural gas supplied to power plants, which can be directed towards the liquefaction plants for exports. The belt-tightening is a sign of the lengths Egypt is going to earn more hard currency as it copes with the effects of the war in Ukraine.

Egypt: Local reports suggest that the CBE has eased import guidelines. The new guidelines reportedly allow for the use of foreign currency held by parent companies in local banks to carry out import operations. The rules would require that the currency be sold to the bank, which then resells it without margins. The changes are aimed at clearing import backlog resulting from letter of credit restrictions that had been imposed earlier.

Ghana: Economic growth in Ghana surprised to the upside in Q2, accelerating to 4.8% y/y from 3.4% y/y in the first three months of 2022. The Q2 GDP print bettered consensus expectations of a slowdown to 2.7% y/y and was driven by manufacturing and cocoa production. Growth in the manufacturing sector accelerated to 4.4% from a year earlier and compared with a 0.5% contraction in the prior quarter. The better-than-expected growth figure in Q2 is, however, unlikely to signal a reversal in Ghana’s growth trajectory, given the effects of the war in Ukraine are yet to fully filter through, inflation continues to surge, and business conditions continue to deteriorate.

Nigeria: To cushion its people from the impact of high inflation, Nigeria is reportedly set to raise its minimum wage. According to a local report citing the Labour and Employment minister, authorities intend to review the current NGN 30,000 minimum wage. However, no figure was mentioned. Nigeria last adjusted the minimum wage in 2019, when it increased it by 67%. At 20.5% y/y, inflation in Nigeria is at a 17-year high, and risks to the outlook remain tilted to the upside in the coming months amid floods that hit Nigeria’s food-producing regions and continued currency weakness.

Nigeria: Data from the Debt Management Office Nigeria (DMO) showed that Nigeria’s total public debt stock (domestic and external) stood at NGN 42.84trn ($103.31bn) as of June 30, compared to NGN 41.60trn ($100.07bn) at the end of March. Total external debt was $40.06bn at the end of Q2 and compared to $39.96bn in Q1. Over 58% of the external debt stock are concessional and semi-concessional loans from multilateral lenders. Due to new borrowings to part-finance the deficit in 2022, the total domestic debt stock was NGN 26.23trn ($63.24bn). Meanwhile, the total public debt stock as a % of GDP edged higher to 23.06% in Q2 from 23.27% in Q1 but remained within Nigeria’s self-imposed limit of 40%. According to the DMO, while Nigeria’s government continues to implement revenue-generating initiatives in the non-oil sector and block leakages in the oil sector, the debt service-to-revenue ratio remains high.

Forex: Producer price inflation in Ghana surges to a multi-year high with a weaker cedi contributing

Supply-side inflation pressures remained entrenched in the Ghanaian economy in August, with producer price inflation accelerating to 46.0% y/y from 41.20% y/y in July. Note that Ghana’s PPI has risen since September 2021, and the August reading was the fastest pace of price growth in the productive sector since September 2014. A breakdown of the data showed that producer prices rose in the mining and quarrying, utility, and manufacturing sub-sectors. The manufacturing sub-sector, which constitutes more than two-thirds of the total industry, recorded price growth of 61.7%, a rise of 4.4ppts compared to July. 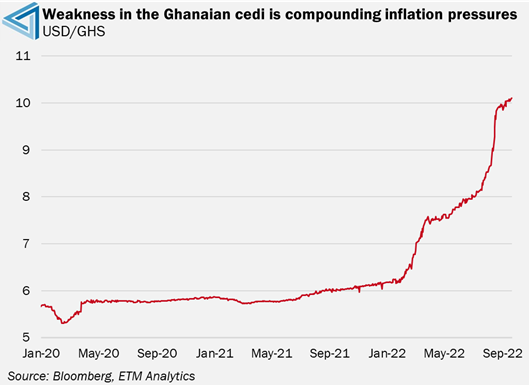 A weaker cedi also fanned inflation pressures in the productive sector in August. The cedi lost north of 14% against the USD during that period and was the worst performing African currency tracked by Bloomberg. While the cedi remains the worst-performing currency year-to-date, it is worth noting that the losses in September thus far have been more modest. For context, the cedi is down by just over 1% month-to-date. Actions by the Bank of Ghana, including significant policy tightening, measures to boost foreign exchange reserves and dollar supply in addition to fiscal steps undertaken by the government to approach the International Monetary Fund for a support program and inflows from a $750mn Afreximbank loan have all contributed to slowing the rate of depreciation of the cedi.

The BoG is set to increase dollar amounts offered at the forward foreign exchange auctions in the final three months of the year, which could further improve dollar supply. In addition, hard currency flows from the $1.3bn COCOBOD loan are expected to come through next month, which should offer the cedi some support.

Fixed Income: Ghana is making progress towards securing a deal with the IMF

While much of the focus for fixed income traders is centred on the FOMC rate decision this evening, there were some big developments in the African fixed income space yesterday. Bloomberg reported, citing people familiar with the matter, that Ghana’s government is preparing to enter into talks with domestic bondholders on restructuring its local currency debt. Bloomberg added that local banks and pension funds are preparing to engage in discussion on debt restructuring that could involve the extension of maturities and haircuts on principal and interest payments. 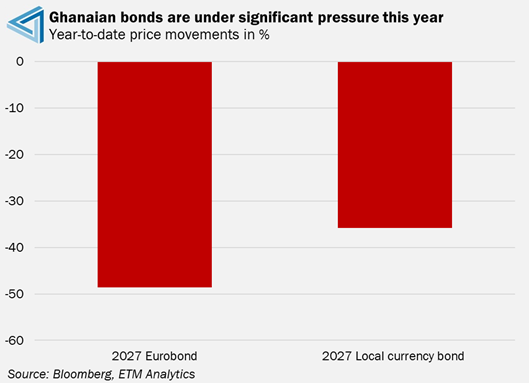 Similar to Zambia, Ghana’s debt restructuring would form part of a debt-sustainability plan required by the International Monetary Fund. Recall that the Ghanaian government recently did an about turn on its stance on the IMF with officials approaching the international lender in July for a $3bn three-year extended credit facility program. Ghana joins an ever-growing list of frontier markets that find themselves in a position of fiscal distress and need to restructure a portion of their debts.

It is expected that a debt restructuring would initially focus on local currency debt and could include external debt down the line. The inclusion of external debt would depend on how much Ghana would have to reduce its debt servicing costs to return to a sustainable fiscal position. The government will likely focus on reducing the country’s interest-payments burden. It is unclear if the debt restructuring will involve haircuts to principals, interest repayments or both. This would likely be decided in the upcoming debates between the government and creditors.

The initial reaction by the market to the news was relatively muted, with the price of the 2027 local currency and hard currency bonds little changed on the session. That said, it is worth noting that Ghanaian bonds have sold off sharply this year, with the price of the local currency 2027 bond down by around 36%, while the comparable Eurobond has lost around 48%, suggesting that a significant degree of fiscal risks has already been priced in.

Macroeconomic: Fixed income markets are on edge ahead of the FOMC rate decision

The big day has arrived, with the FOMC set to deliver its much-anticipated rate decision tonight. Following the shocking CPI data published last week, the Fed is expected to announce another outsized rate hike at its September policy meeting. Consensus expectations as per Bloomberg surveys are for a third consecutive 75bp hike, which is consistent with positioning in the futures market. However, there is an outside chance of a 100bp rate hike, although this is not seen as the base case given rising pressures in the US housing market. 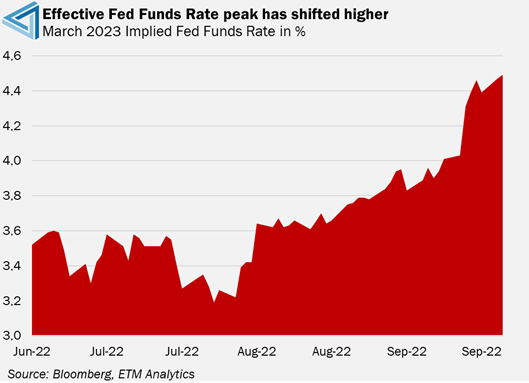 Note that the September policy update will also include the Fed’s Summary of Economic Projections and dot plots, which will be viewed for fresh insights into the US monetary policy outlook. This forward guidance is expected to be extremely hawkish amid rising fears of a wage-price spiral. All told, the Fed is likely to signal that it will remain aggressive in its fight against inflation until the data show a few consecutive months of falling core inflation and a notable loosening of the labour market.

While the actual rate decision will be watched closely, market direction will likely stem from the guidance from Fed Chair Powell’s policy guidance and the rhetoric used in his statement. Following the stronger than expected CPI data and hawkish commentary from Fed officials, the Fed Funds futures market has priced in an additional 50bps worth of rate hikes in the coming months. Specifically, the derivates market now sees the US rate hiking cycle peaking at 4.50%, up from around 4.00% at the start of the month. As has been the case for much of this year, the directional impetus for African Eurobonds will almost certainly stem from developments in the US rates market.