Maldives: Our thoughts on the tender offer and new issue

Maldives (B3/-/CCC) announced on Monday the launch of a cash tender offer for its existing US$250mn 7% 06/2022 bond, financed in part by a new issue. The new issue is a benchmark 5-year US$ Sukuk. Investor meetings started on 22 March. The tender offer expires on 30 March.

The operation makes sense, seeking to reduce the size of the near-term debt service hump and lengthen the curve. The maturity itself is 30% of its current official reserves.

But with the 22s trading at a yield of c11.6% (mid-YTC basis), in a market context of 93-97 according to indicative StoneX prices, there might be a question over the viability of a new issue, and its cost-effectiveness. In this respect, there are some similarities with the situation in Laos, which is struggling to refinance an upcoming maturity of its own in June after the apparent failure of its third attempt last week.

A successful operation for Maldives, amid a small and dedicated regional investor base, could allow a sharp decline in yields – and there might be good reasons to think that the bonds are mispriced anyway. Even if unsuccessful, on this occasion, there should still be time to refinance the maturity or find an alternative solution, unlike Laos which appears to be running out of time. Otherwise, however, investors may begin to fear the need for a bond reprofiling or restructuring. Moreover, as a DSSI participant, there might be a question if Maldives could seek recourse to the G20's Common Framework. 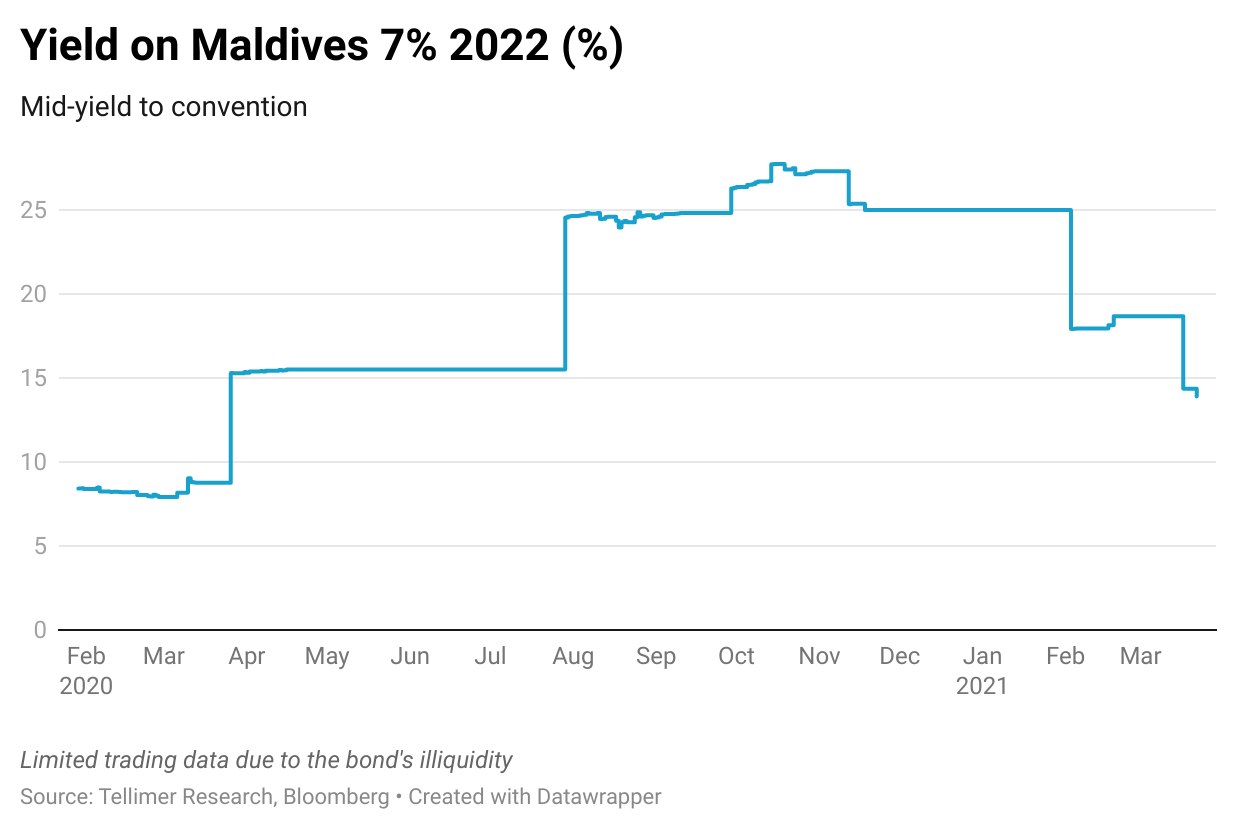 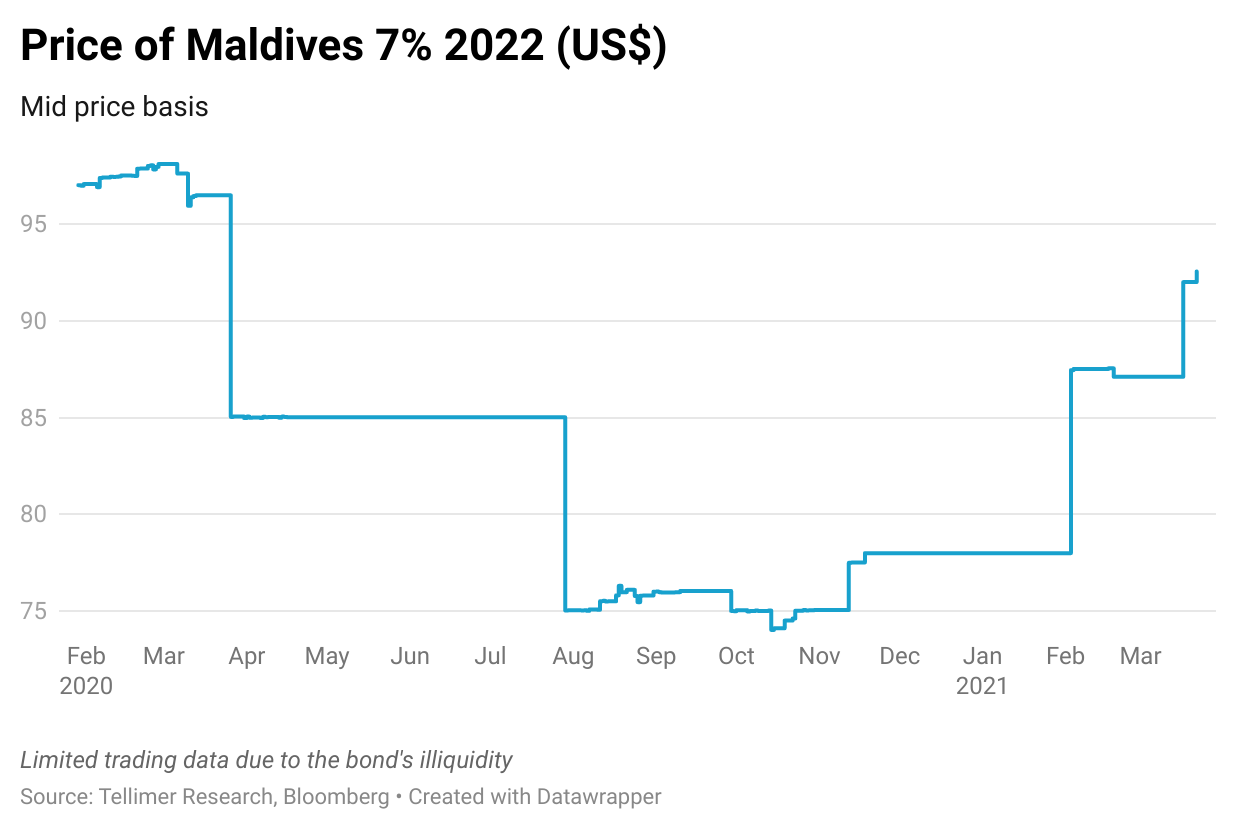 But, while there are echoes of Laos, we see another key difference. Namely, Maldives has a bit more time not only to find a solution but also to benefit from a post-Covid economic recovery.

Maldives (nominal GDP US$5bn, population 530k), a tourist-dependent small island nation (classified as a low income country by the World Bank), has been hit hard by the Covid pandemic due to international travel restrictions, although its own incidence of infections (22.7k) and deaths (66) remain amongst the lowest in the world (in absolute terms and on a per capita basis, according to Worldometer).

Tourism arrivals in 2020 fell by 67% compared to 2019, according to the tourism ministry, to stand at 555k (compared to 1.7mn in 2019). Tourism receipts, which accounted for about 80% of the earnings from G&S exports pre-pandemic, fell by 60% to US$1.2bn last year, according to the central bank (Maldives Monetary Authority). 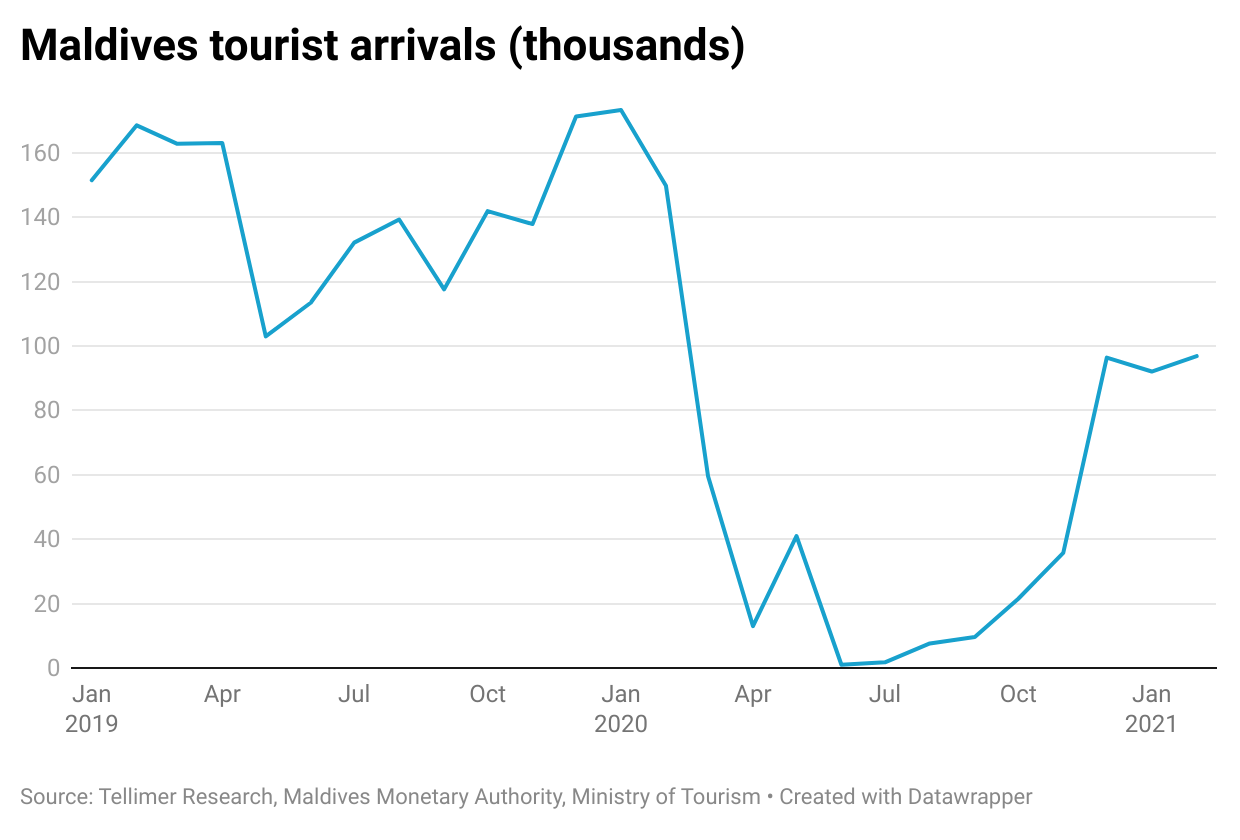 Importantly, however, the tourism outlook might be on the cusp of improving. Tourism arrivals for March (month to 22nd) rose 26% on the same period last year and reached over 260k YTD (peak season is December-April). Nearly half of all tourist arrivals are from India and Russia. A gradual easing of travel restrictions elsewhere, especially in Western Europe, along with vaccinations and possible vaccination passports, may see further improvement even ahead of the next winter season. Maldives won the award for the World's Leading Destination last year at the World Travel Awards 2020, in what are obviously challenging times.

Moreover, the damage to the current account last year was well contained due a concurrent decline in imports, such that the overall current account deficit narrowed from US$1.5bn in 2019 (27% of GDP) to US$1.1bn in 2020, according to the central bank. Official reserves actually rose 31% during the year, standing at US$985mn at end-2020 (latest: US$831mn in January, according to the MMA), although seasonality suggests they will decline through the year until next winter. Reserves strength is important in the context of the country's fixed exchange rate regime.

Still, real GDP is estimated to have fallen by 29% last year, according to the MMA, one of the steepest declines in the world, although is projected to rebound this year with growth of 13.5%. The overall fiscal deficit ballooned to 27.5% of GDP, according to the MMA, compared to just 6.6% in 2019, as government revenue fell 37%.

But notwithstanding some optimism over the outlook and resilience to global conditions, and strong policy management (we think the central bank's website and quality of statistical data ranks favourably by comparison with much bigger EM, let alone low-income countries), the elephant in the room is its high level of public debt and its composition. Maldives is classified as being at high risk of debt distress by the IMF.

The IMF WEO projected public debt to rise to 118% of GDP in 2020, rising by 40ppts from 2019, and more than doubling since 2015. It will take some fiscal effort to restore debt sustainability, with a gradual reduction in the now large primary deficit, although a return to strong trend rates of real GDP growth will help. Real GDP growth averaged 6.2% in the ten years to 2019.

Moreover, Maldives (like Laos) is DSSI-eligible. Maldives benefitted from Paris Club debt service relief in September 2020; as far as we know, it has yet to request extended-DSSI relief. Potential DSSI savings last year amounted to US$50.7mn (0.9% of GDP) according to the World Bank, although it is unclear how much of this actually materialised. Potential savings this year (January-June), if requested, amount to US$61.3mn (1.1% of GDP).

Meanwhile, total debt service on its two international bonds (US$250mn 7% 2022 and the smaller, and much more illiquid, US$100mn 5.5% 2026) is modest at only US$23mn (interest only this year), although that obviously increases sharply next year with the 22s' maturity, when it rises to US$264mn (30% of prevailing reserves).

Overall CG external debt service was cUS$100mn in 2019, according to the MMA. Assuming this is little changed since, at 12% of current reserves and only 6% of G&S exports (based on 2020 exports), it suggests liquidity conditions remain manageable.

CG external debt was US$1.4bn in 2019, according to the MMA, more than doubling since 2015, although amounting to just 25.5% of GDP (the debt/GDP ratio will have increased further in 2020, although this suggests Maldives has more of a domestic debt problem rather than an external solvency problem). Bondholders and multilateral creditors accounted for 24% and 22% respectively of total CG external debt, and are the largest MLT creditors.

However, external debt and debt service is much higher at a wider level of government. According to World Bank IDS data, public and publicly guaranteed (PPG) external debt amounted to US$2.2bn in 2019, about 40% of GDP and 60% of G&S exports. Assuming debt didn't change much in 2020, the fall in exports would have increased the PPG external debt/exports ratio to 138%.

The creditor composition of PPG external debt is also markedly different from CG external debt, with bilateral debt amounting to US$1.1bn and therefore accounting for nearly half the total, and official creditors altogether accounting for 65% of the total, with private creditors (bonds plus other commercial) the remaining 35% (with bonds about 16% of the total and other commercial 19%). 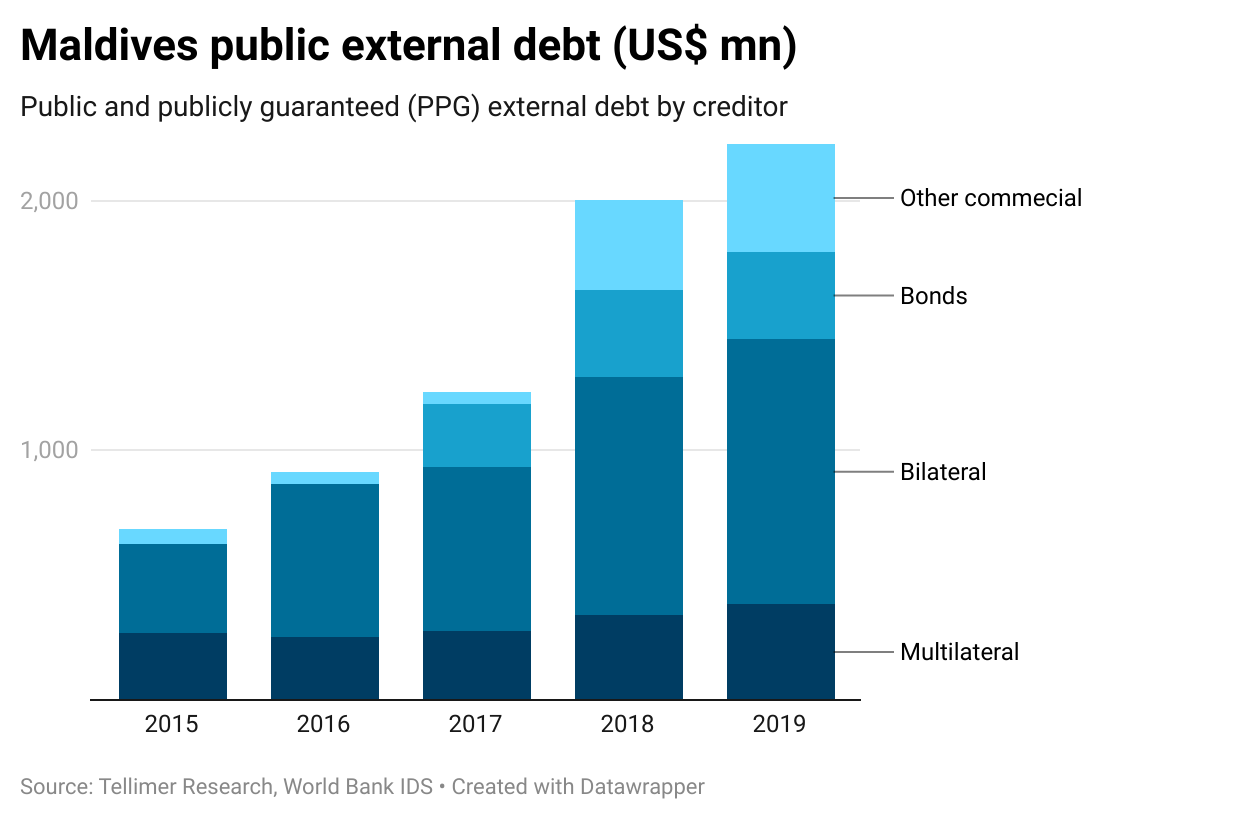 The concern for investors might be, given the high public debt ratio, large bilateral debt and high external debt service, that Maldives may seek recourse to the G20's Common Framework if a refinancing operation isn't successful, which is likely to require PSI through comparability of treatment given the relatively high share of commercial debt (including bonds) in external debt (despite the low bonded debt stock and low interest on the bonds). That said, there doesn't seem an obvious need for significant investor losses on the bonds beyond maturity extension.