Maldives: Improving prospects, but not out of the woods yet

The note below was originally published as part of our IMF/World Bank Annual Meetings summary note on 27 October. Bond prices have been updated.

The IMF concluded the 2021 Article IV on 10 September, and we await publication of the staff report. We hope it will be published; recent AIVs (in 2017 and 2019) have been. Until then, we only have the press release but that was published nearly a month after the board meeting.

Maldives must have been one of the worst-affected countries in the world by Covid. Real GDP fell by 32% last year, the third-biggest contraction among the IMF WEO countries (ahead of only Libya and Macao), mainly due to the collapse in tourism, the economy’s key sector. Tourism receipts represent about 60% of GDP. Public debt nearly doubled to 146% of GDP, the third-largest increase in absolute terms (ahead of only Sudan and Venezuela), so that it now ranks 12th highest in the world (and most countries with a debt burden of this order, except Japan, Cabo Verde, Italy, and Singapore, have had some kind of debt crisis). 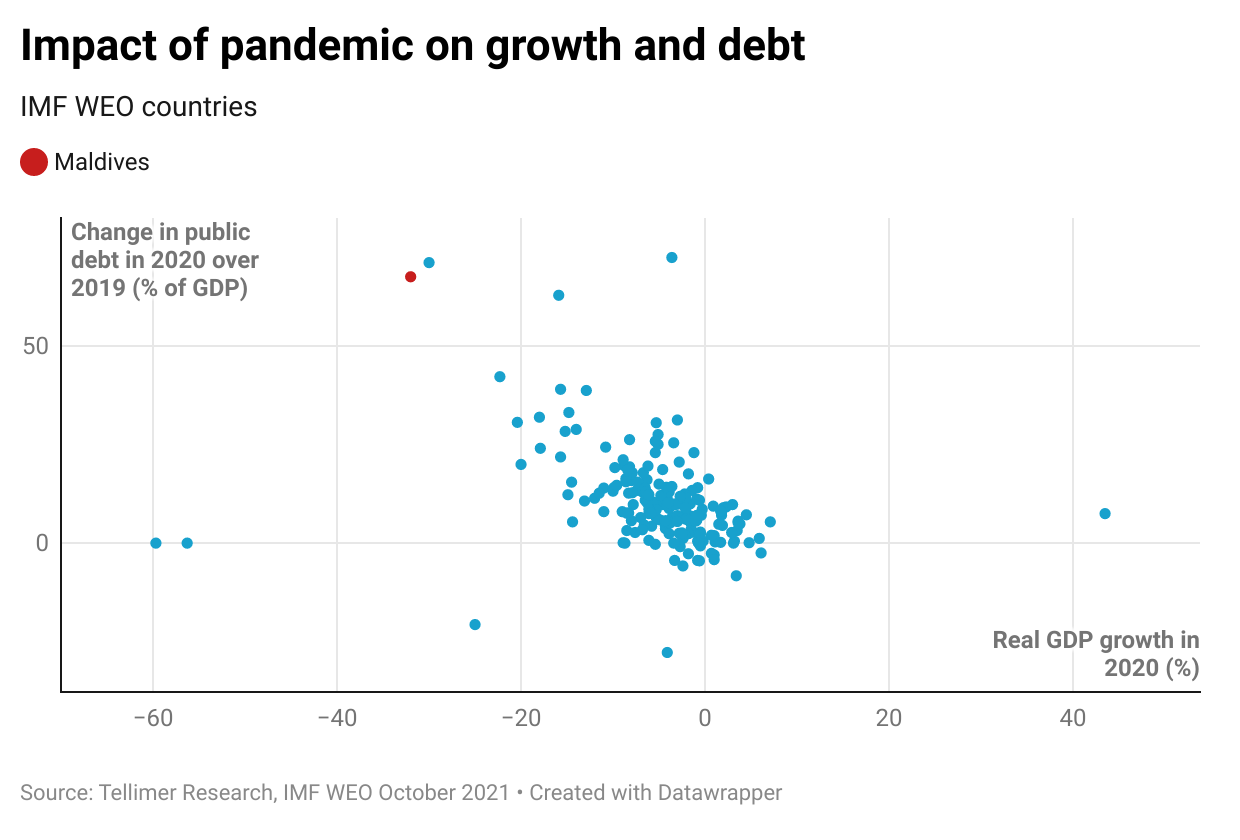 But the authorities acted quickly and took a number of measures, which were praised by the IMF. These included the government's prompt emergency health response, fiscal measures (amounting to 3.4% of GDP) to mitigate the economic impact, and the rapid rollout of the vaccination programme. The tourism sector reopened in July 2020.

Tourism has since returned to almost its pre-Covid level, although the composition is different. Recent media reports say Maldives has received more than 905k tourists so far this year, although that is still 30% down on 2019. The recovery in tourism could also help alleviate stress in the parallel currency market (with the parallel rate at around MVR18 per US$, there was a 15% spread over the official rate, which hadn’t been devalued for ten years) and bolster reserve coverage. Reserves have recovered since last year's lows, standing at US$913mn in August (IMF IFS data), and benefitting also from the IMF's SDR allocation. 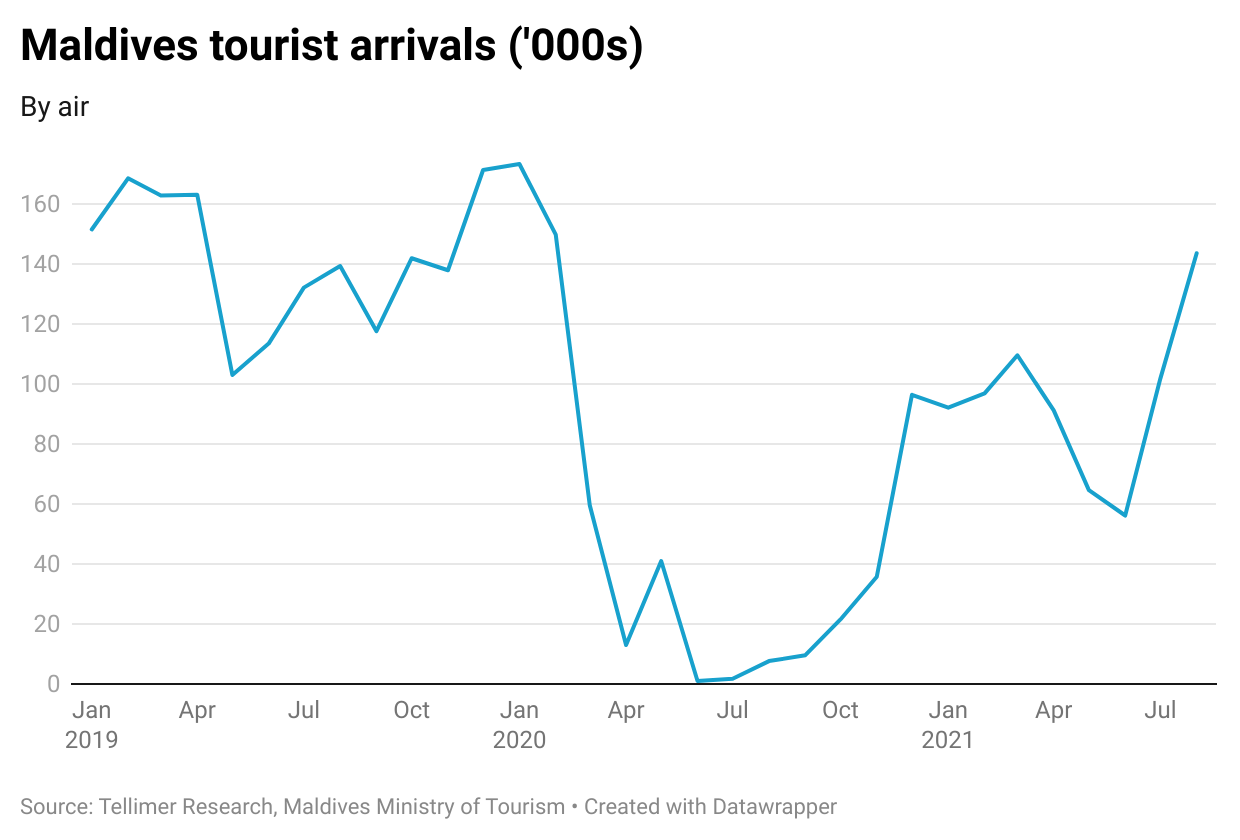 The authorities do not seem interested in an IMF programme. Maldives did receive IMF emergency financing early in the crisis, with a 100% of quota RCF in April 2020, and of course is eligible for DSSI. It has participated in all three rounds of DSSI, with total savings estimated at US$166mn (2.9% of GDP) according to the World Bank. The country’s last Fund programme was a joint SBA/ESF in 2009-2012. But Maldives has been one of the biggest recipients of IMF Technical Assistance (TA) in South Asia in 2020. That said, not having a programme may allay fears over its seeking a Common Framework treatment (an IMF programme is a condition).

Instead, the government’s strategy has been to issue bonds (sukuks). It has issued a total of US$500mn this year, tapping its initial US$200mn offering in March twice (US$100mn in April and US$200mn in September). Part of the proceeds was used for a LMO to fund a tender offer for the 2022s. However, there might be questions over its issuance strategy, and whether by issuing sukuks which might appeal to a regional investor base (and is still index eligible) the authorities are cutting themselves out of a bigger market by not issuing a plain vanilla eurobond. That said, such a small country may only appeal to more dedicated frontier market investors rather than bigger mainstream EM funds, and some investors may be deterred by its CCC rating*.

Maldives has also been able to rely on official and bilateral funding, with financing from India, China and the Asian Development Bank (ADB). India has replaced China as its main bilateral partner and source of financing in recent years. The Reserve Bank of India (RBI) also extended a foreign currency swap to Maldives last year, totalling US$400mn, under a long-standing swap agreement. US$250 million of the swap remains outstanding, and is due by the end of this year, after Maldives repaid part of the facility (US$150mn) in August.

However, we think lack of visibility over external financing needs and sources is a concern, although the IMF staff report may shed more light on this. Equally important are the fiscal measures the government is taking to reduce the fiscal deficit and the debt burden, where domestic revenue mobilisation could be improved and more could be done on the spending side. The authorities are also looking at digitisation. The overall fiscal deficit widened to 23% of GDP last year, compared to 6% over 2018-19 (illustrative of pre-pandemic vulnerabilities), although is projected to narrow to 18% this year and 13% in 2022, in the IMF WEO, in large part due to the cyclical recovery. However, the deficit still remains wide over the medium term, averaging 7% of GDP.

Public debt is projected to fall, albeit gradually, to 137% this year and down to 123% by 2026, in the IMF WEO, in part due to nominal GDP growth. Real GDP growth is projected to rebound to 19% this year, and average c12.5% over 2022-23, before easing to 5-6% over the medium term. But lowering debt further is advisable. Moreover, while the jump in debt/GDP was mainly due to the lower denominator, debt levels were higher too. Debt levels were not falling as fast because of the government’s ambitious capex programme over the medium term, which is largely financed by India. While capex spending was financed abroad, current spending was not.

All in all, our discussions at this month's virtual IMF/WB Annual Meetings painted a positive picture of Maldives in terms of its willingness to engage and prospects for recovery, although we think there are some key questions we want answers to and the country is not out the woods yet.

*Since the original publication of this note, Fitch upgraded its rating from CCC to B- on 28 October. 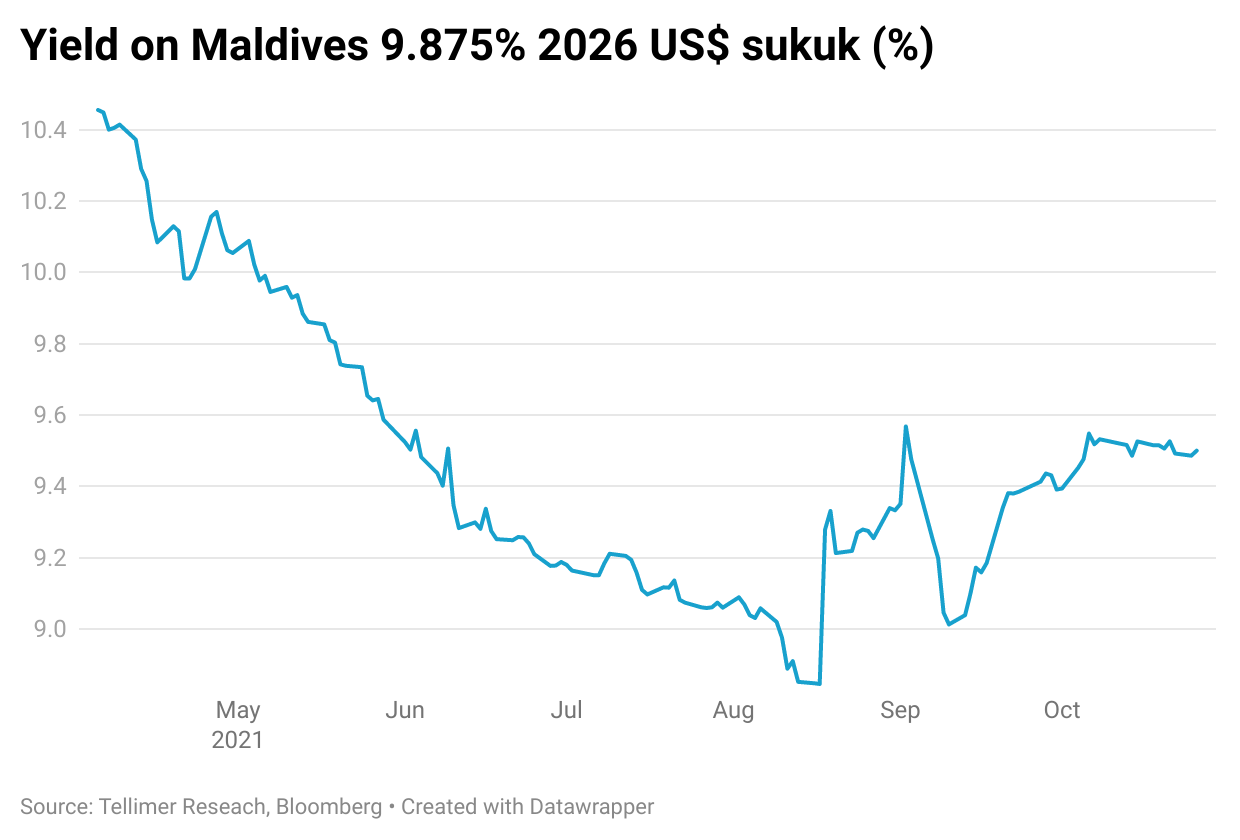