Malaysia equities are cheap but the appointment of 75-year-old Anwar Ibrahim as prime minister on 24 November, following the 19 November election, should not be regarded as a positive catalyst, which in any way resolves deep divisions in politics and establishes a coherent and stable parliamentary majority. 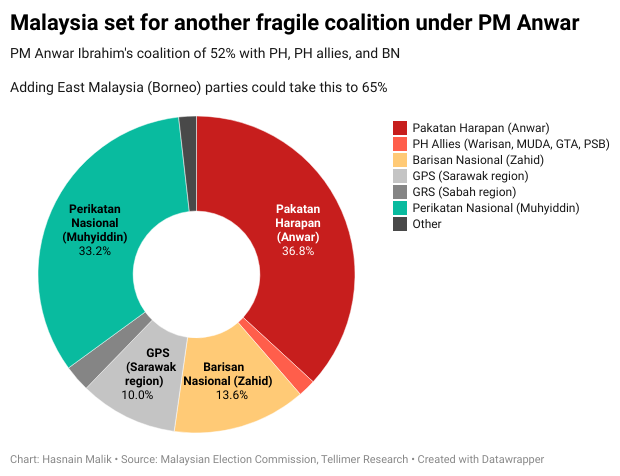 A reformer who needs to ally with non-reformers

In isolation, Anwar might be a progressive reformer, pushing policies which are positive for investors, in terms of economic and political risk outlook:

However, Anwar's Pakatan Harapan plus allies bloc has merely 39% of seats in the lower house of parliament. This has necessitated an alliance with the Barisan Nasional bloc (14%).

Effectively, the stability of this coalition is dependent on meshing the different priorities of structural reform for PH and the dilution of anti-corruption efforts for BN – it is going to be hard to push greater accountability in public finance at the same time as governing with those accused to profiting most from that lack of accountability – as well as the reconciliation of individuals who have been campaigning against each other acrimoniously for over two decades.

The example of the failed reconciliation of former PM Mahatir Mohamed and Anwar – their governing alliance collapsed in early 2020, less than 20 months after their election triumph – is a negative precedent for how quickly old personal animosities and divisions over policy strategy and tactics can resurface and derail a coalition.

Risk that UMNO does not stay for long

Furthermore, the BN bloc's willingness to work with Anwar's PH may be over dependent on the current leader, Zahid Hamidi, of its largest constituent party, UMNO. Zahid was a one-time ally of Anwar's before the latter was expelled from UMNO in 1998.

Zahid remains exposed to anti-corruption prosecution and is at risk of losing control of UMNO. His successor may opt to regenerate the party, which was the dominant force in Malaysian politics until 2018, by jettisoning its association with political leaders like Zahid and former PM Najib Razzak, who are tainted with corruption allegations (in the case of Zahid) or convictions (in the case of Najib).

The new government will be tested soon with Anwar stating he will hold a parliamentary vote of confidence on 19 December, the UMNO general assembly on 21 December, and UMNO party elections before May 2023 (within six months of the general election).

Equities are cheap versus history

Malaysia equities (FTSE Bursa Malaysia KL Composite index) are down 10% year-to-date in US$ total return terms, better than most in Asia, except for Indonesia (flat), India (down 3%), and Thailand (down 6%). 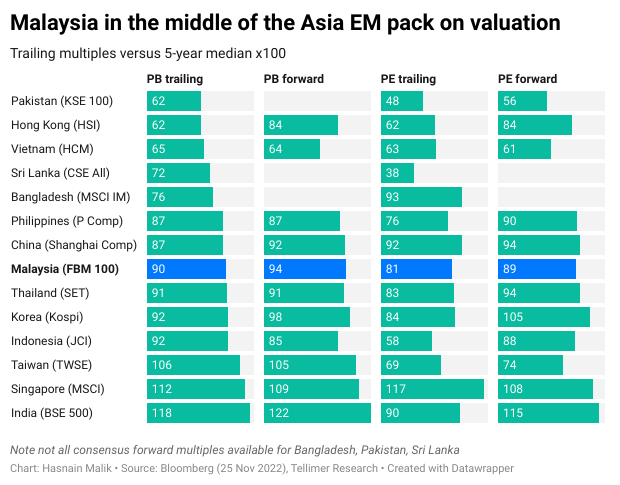