Malaysia: Crisis deepens as no clear government in sight after PM’s resignation

The resignation of PM Muhyiddin who led the Perikatan Nasional (PN) government for 17 months has plunged the country into a deep political crisis for which there are no obvious solutions. Given that new general elections are currently off the table due to the spread of COVID-19, a new PM will have to be elected who will likely govern the country at least until the COVID-19 pandemic subsides. In our view, the potential for a stable long-term government is very small and the next elections will likely happen in H1 2022, more than one year earlier than the end of parliament's term in July 2023. The King, who has the authority to dissolve parliament, has already expressed the opinion that now is not an appropriate time to hold new elections.

Currently, there are several different factions in parliament who have different agendas and is yet uncertain who will manage to convince the King to form a new government. The names who are touted by media to become new PM include Pakatan Harapan (PH) leader Anwar Ibrahim, UMNO veteran Tengku Razaleigh Hamzah, Deputy PM Ismail and foreign minister Hishamuddin. UMNO leader Zahid, who has triggered the collapse of the PN government, could also potentially present his bid to become PM. In addition, we will not be surprised if other names also come out in the following days as potential PM candidates.

King's role and the process of PM's election

Due to the peculiarities of the Malaysian political system, the new PM candidate does not need to officially win a confidence vote in parliament to be appointed as PM. The King appoints a PM candidate who in his judgement is likely to command a majority in parliament, according to the Constitution. In practice, the PM candidate can present to the King a list of MPs who have signed statutory declarations in support of his or her cabinet. We remind that similar thing happened with in Feb 2020 as the Muhyiddin government never actually won a true confidence vote in parliament.

The King can also start consultations with MPs and interview each one individually to determine their allegiance as it happened in Feb 2020 during the previous power transition period. This will likely take a couple of weeks, but the country is currently managed by Muhyiddin as caretaker PM which removes some of the urgency to solve the political crisis. It should be noted that the the King's ability to steer the country through the political crisis remains limited by the Constitution as political leaders need to take the initiative to find a working solution. Still, the King might urge parties to maintain national unity for the sake of the country's stability as it happened with approval of Budget 2021. To remind, PN and the co-ruling UMNO initially disagreed on the budget, but King's insistence on passing a budget helped the PN government to survive the budget vote.

Here are the main scenarios for a new government in order from most likely to least likely.

The most likely outcome of the crisis is some form of unity government supported by a broad range of parties, in our view. Media speculates that such cabinet could be led by UMNO veteran Tengku Razaleigh, who has been one of the most vocal opponents of the PN government and could work with all major political actors. Tengku has previously given indications that he could work with the main opposition PH bloc and is on good terms with former PM Mahathir.

The main supporter of the unity government is likely to be the Mahathir who leads his own Pejuang party with 4 MPs, but is also influencing the regional Warisan party which has 8 MPs. The 96-year-old two-time former PM Mahathir seems like the best option for interim PM, but he has ruled out another PM term due to his age. Mahathir could still try to use his political leverage to promote for the PM post his son, Mukhriz Mahathir, or Warisan leader Shafie.

In our view, a short-term interim cabinet which includes mostly technocrats is the most logical choice as it will allow the government to deal with the current COVID-19 issues and prepare the country for new elections. At the same time, no political party will carry the entire political responsibility for its policies. Still, we think that such a cabinet will not be the first option for most parties and other variants must first be ruled out before parties agree to support a unity government.

PH leader Anwar has control over some 93 MPs in parliament (of which 89 are from PH) who are supported by different ethnic groups. He needs the support of some 18 additional MPs to become PM, but it is uncertain where they might come from. Anwar remains at odds with the Malay political establishment as he can potentially dismantle affirmative action Malay-only economic programmes that prioritise ethnic Malays (so-called Bumiputera groups) over other ethnic minorities (Chinese and Indian).

In addition, Anwar is seen as too soft against the multiracial DAP party, which is his key political ally and is supported mainly by Chinese voters. DAP has been used as the common enemy by ethnic Malay parties and UMNO maintains to this day a "No Anwar, No DAP" policy which prevents it from cooperating with Anwar or DAP. Last but not least, Anwar has also had several sodomy charges raised against him, for which he has been imprisoned twice. This makes him deeply unpopular with conservative Muslim groups, including the minor ruling PAS party.

Anwar, on the other hand, has been consistent in his pursuit of his long-term goal to become PM which has been hindered multiple times in the past, including in 2020, by his long-time rival PM Mahathir. In our view, Anwar is unlikely to support another PM candidate as now it is his best chance to finally become PM. We remind that Anwar claimed in Sep 2020 that he has the support of a "strong, formidable, convincing majority" in parliament to become PM, but this was never actually proven in front of the King. It should be also noted that In April 2021 an audiotape was released in which UMNO leader Zahid and Anwar were heard talking in a friendly manner and conspiring against the government, even though both have denied the tape's authenticity. Overall, we remain unconvinced that Zahid and Anwar will remain allies once Muhyiddin's government has fallen.

In our view, Anwar has rather small chance to become PM as ethnic Malay parties such as UMNO and the PN component parties (PPBM, PAS) continue to view him as a threat to policies which give preferential treatment to Malay voters. If they support him now, even for a short period of time, this can seriously hinder their results in the next elections. That being said, if Muhyiddin's PPBM party with 31 MPs decides to reunite with PH, the PH bloc can count on the support of some 123 MPs which is more than enough to govern. However, PPBM includes some 11 MPs that split from Anwar's PKR party in 2020 which essentially paved the way for the creation of the current PN government. Among these MPs is Anwar's former rival in PKR, economy minister Azmin Ali. Azmin has previously opposed Anwar's ambition to take the PM post and sided with former PM Mahathir in his struggle with Anwar.

The PN coalition has reportedly already made attempts to form another government led by Deputy PM Ismail Sabri. Ismail is UMNO's Vice President and has been leading the pro-government faction in UMNO, for which he has clashed with UMNO leader Zahid. If PN supports a PM candidate from UMNO this can negate some of the arguments Zahid has made against the PN government. On the negative side, Ismail has been responsible for the country's COVID-19 response as defence minister and he has gotten a lot of flak for this, which makes him easily attacked by Zahid. Another potential PM candidate that can lead a new PN government is foreign minister Hishamuddin who is a cousin of former PM Najib and is also very experienced and well-connected politician.

The main reason why a new PN government is unlikely is the rift between UMNO's Zahid faction and Muhyiddin's PPBM party. Muhyiddin's suggestions on Zahid's corruption trials have poured cold water on the prospects for another potential PN government, in our view. Hishamuddin, on the other hand, seems like a more acceptable variant for UMNO's Zahid, but he still faces a very difficult task of mending ties between Zahid and PPBM. Overall, we think that a new political formula will be needed to bring the country out of the current political crisis as the PN coalition has exhausted its capacity to lead the country.

UMNO leader Zahid can also potentially seek to become the next PM or support a PM candidate who is loyal to him. Zahid leads a faction of some 15 MPs who abandoned the PN government and is trying to unite the party once again behind him. PM Muhyiddin has hinted that Zahid wants himself cleared of corruption charges which is the reason behind his rebellion against the government. Zahid and former PM Najib, who are part of the group anti-government faction, are both currently in trial for various corruption and graft charges. Meanwhile, some media outlets have suggested that Zahid might not support Anwar's bid to become PM as he is unconvinced that Anwar will be willing to influence the judiciary in order to clear his charges. In the following days Zahid's UMNO will likely announce its PM candidate.

However, Zahid has very few allies in parliament as he doesn't even have full control over his own party. Some 27 MPs led by Deputy PM Ismail Sabri disagreed with the decision to withdraw from the government. We will not be surprised if Ismail even decides to split from the party and joins the PN coalition if he cannot reconcile with Zahid. Traditionally, Zahid's main allies outside of the UMNO-led Barisan Nasional (BN) bloc are the regional GPS party with 18 MPs and the conservative Muslim PAS party which also has 18 MPs, but they both backed the PN government during the current crisis. Combined with PAS and GPS, BN theoretically can have up to 78 MPs which means that they need 33 MPs to gain majority. The only parties that can make such government work are PM Muhyiddin's PPBM party or Anwar's PKR party. However, Muhyiddin has adamantly stated that he will not give power to "kleptocrats", alluding to Zahid, while Anwar will likely want the PM post in any government he participates in. 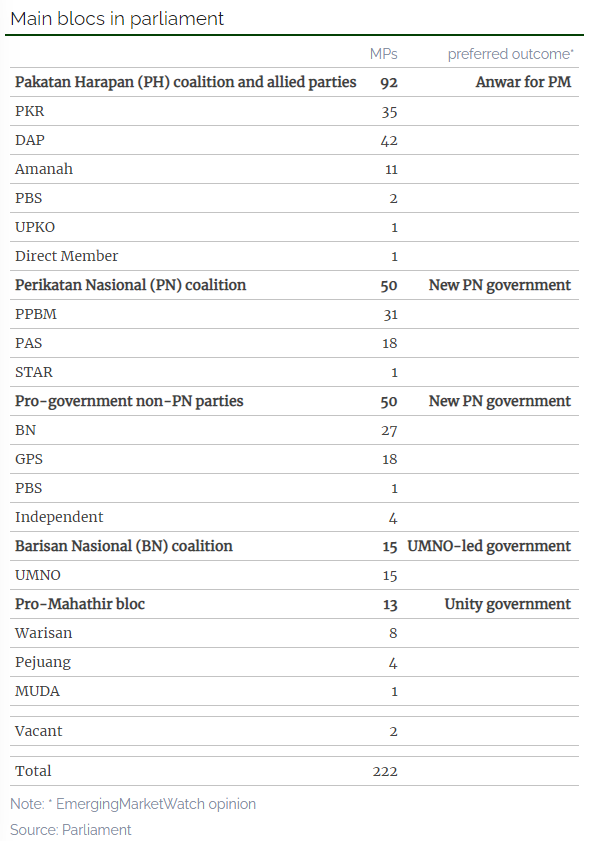